The day dawned dark and grey and rather ominous.  The forecast... that we're fast losing faith in... indicated that there would be showers on and off all day.  We just hoped it wouldn't be raining when we went down the Anderton Boat Lift.  The visitor centre doesn't open until 10am so Mick and I went for a walk.  We stumbled upon some free-range eggs for sale at one property.  By the time we got back it wasn't all that far off 10am.

It was out with anchor again today.  It seemed like such a lot of messing about to get it out for only 24 hours on the river Weaver.  We went down to the Anderton Lift admin office to book in our passage.  There was the very next one free so Mick and Barry went back to bring the boats to the waiting dock while Carol and I provided the boat details to be logged in to the computer.

Before we knew it we were being called through.  It was incredibly windy which made it difficult negotiating our way through the entrance into the pound before the lift.  The operator indicated to Barry to come in and take the spot on the right and for us to follow and go in on the left.  The wind had other ideas.  nb Winton's Folly was pushed across to the left despite Barry's best efforts.  After a bit of "to and fro" he managed to get the boat across to the right enough for us to nudge our way through.  We were being buffeted wildly by the wind but the rain held off.

First we waited along the little entrance way while they did the testing for of the gates.  The fellow explained that the safety mechanism won't allow the gate to be lifted until it's all checked that the other end is secure.  Then we moved forward and into the caisson.   We were instructed to tie the stern tightly to the hook provided.  Then... more waiting while the trip boat entered the right hand caisson down at river level... and the gates tested again.  Finally we began our slow descent.  The very chatty operator kept talking as long as we could still hear him.  He was quite amused by his comment that he'd visited Melbourne in the 1970's on a day that it was closed!  Apparently on Anzac Day the city had nothing happening back then.

It was a strange experience to be in our boat suspended in the air.  Mid-way down the trip boat in the next caisson came into view.  We were level with them for just seconds and then they continued on as we descended.  Looking up to beneath that caisson that is supported by a single, extremely thick, pole was daunting.  How is they weight of two boats plus the water holding them afloat get supported by that massive pillar.  It's amazing really.

At the bottom we waited some more and finally the gate in front of us rose slowly to let us out.  We were off.  There were some gongoozlers watching and taking photos from the grassy area.  Apparently only 4 boats have been down the lift this whole week.  Very quiet.

It's only a short distance to Northwich and the strong wind continued.  We were punching the current and wind both so the engine worked at it.  We reached the mooring at Northwich and after a bit of confusion on Winton's Folly about which side we should be mooring, we pulled in to the bank and turned to see the wind had got them.  Their boat spun around on a match head it seemed and suddenly they were facing back the way we'd come.  Oh well.  We'll be going back that way tomorrow anyway so they just moored up.  No sooner had we tied the ropes and some drizzle arrived.  It didn't last long and then we saw the sun for a short while.

It was lunchtime by then but we had Lynne coming to visit.  She and Marie arrived not all that long after and we sat and had lunch at the dinette and a catch up.  After lunch we all went for a walk around town, coming back with bags in hand.  There was a Marks and Spencer which meant a couple of lazy dinners for us.  Back onboard we had a good chat, cup of tea and a slice of the delicious stem ginger cake the girls had brought with them.

For anyone interested in information about the Anderton boat lift : Click
Not fantastic photos today due to the dull and overcast weather. 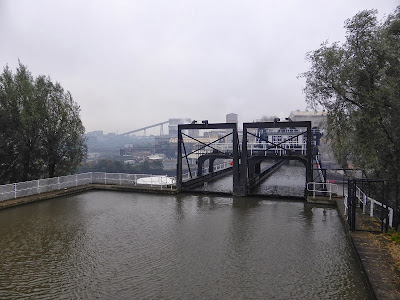 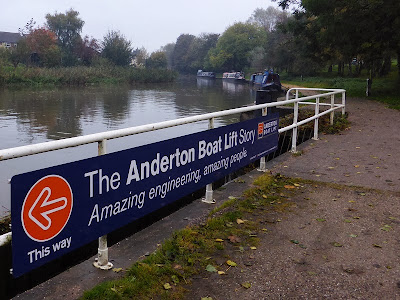 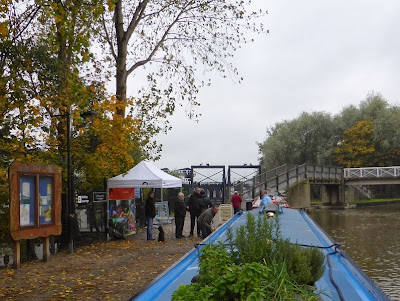 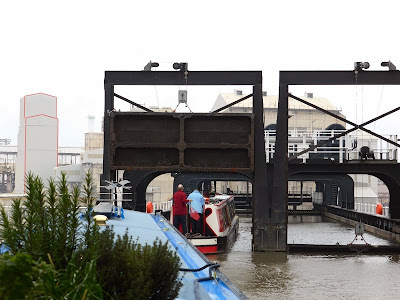 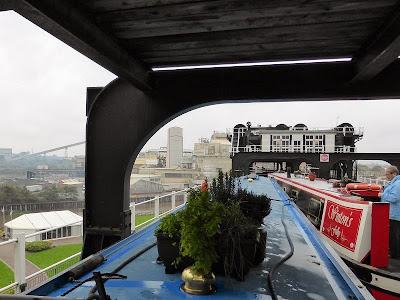 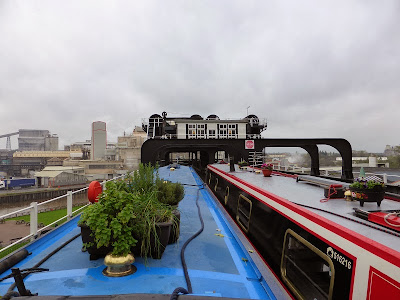 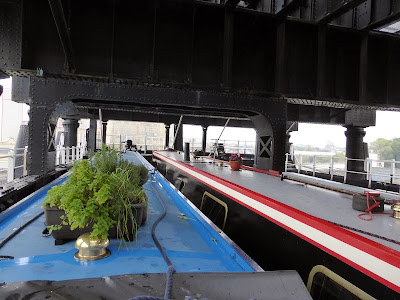 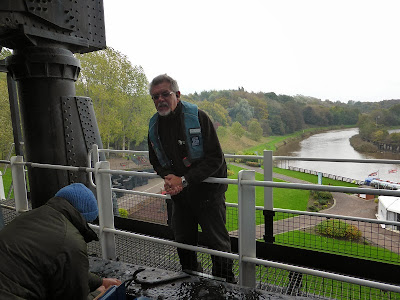 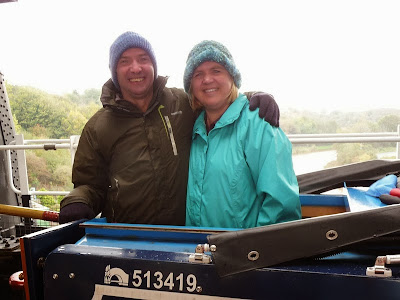 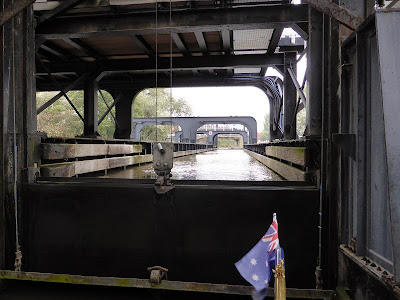 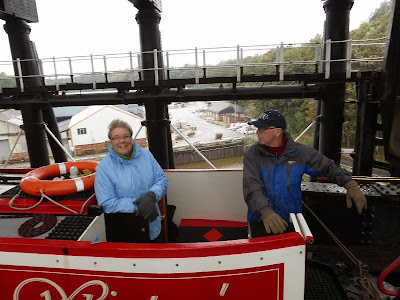 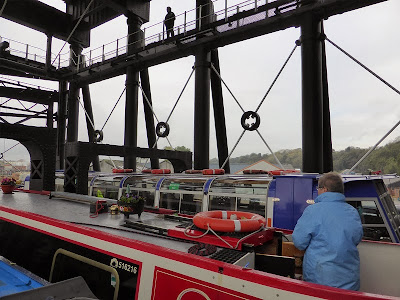 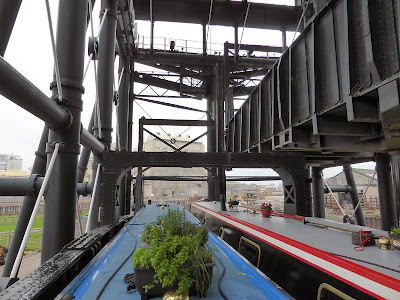 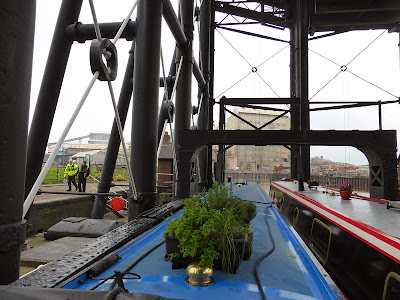 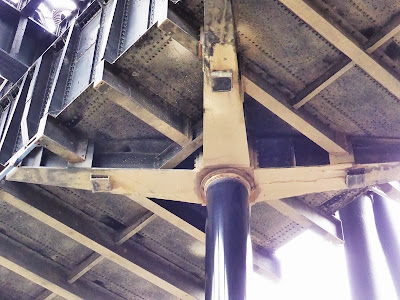 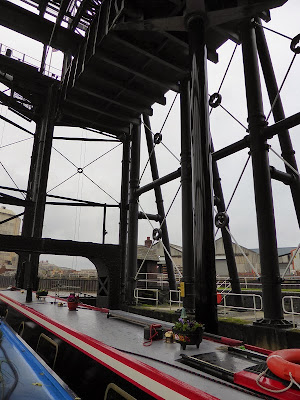 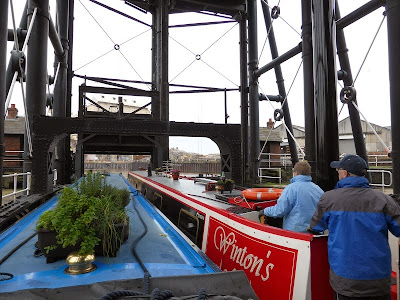 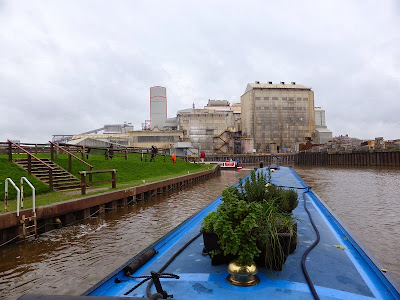 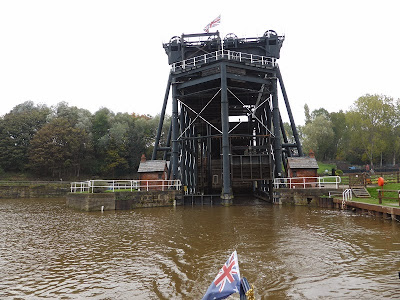 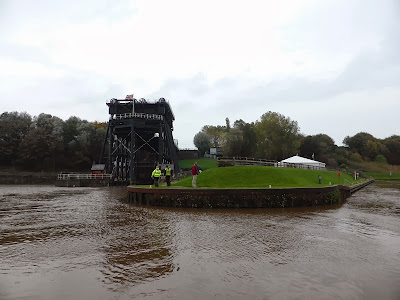 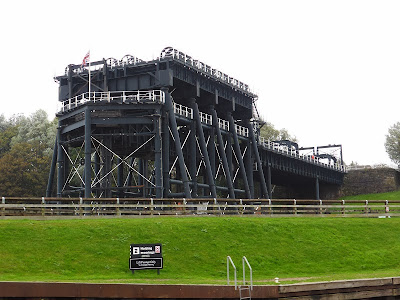 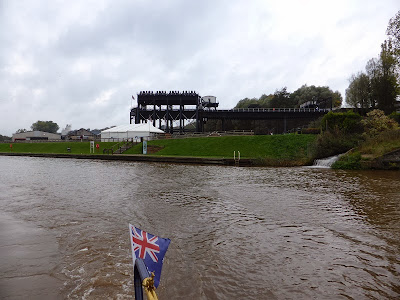 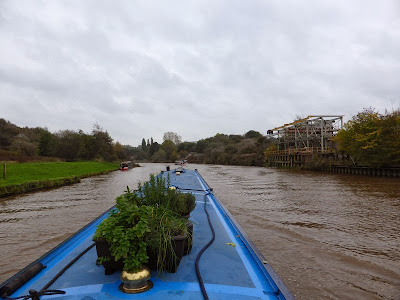