It was a very chilly start to the day.  When Mick got up to turn on the fan heater there was a creak against the side of the boat.  Ice!  It wasn't thick but you could hear it as we moved about the boat.

The other problem with having no central heating is that we also have no hot water.  That means we're back to the shower block.  I was up at 7am and poked my head out to check out the water on the marina.  Pretty much frozen. Rugged up in my boots and coat to brave the freezing temperatures it was a bit lighter outside by the time I headed off for a shower.  I've always loved early morning and today was no different.  I grizzle and complain about having to go out for a shower but once I'm outside the boat it's often so pretty that I'm glad.

I'm extremely careful on the pontoons.  Diane from nb Ferndale took a spill yesterday and ended up with one leg in the water.  They are right beside the gate to our pontoon so don't even have to negotiate the long expanse of decking with water on the other side.  Mick insisted on coming out and watching until I got to the gate.  I think he had fears of finding me frozen in the water.

The swans had a little patch of un-frozen water and they looked so lovely in the morning light.  By the time I came back to the boat it was much lighter and it was clear to see that the boats all looked frozen.

Having decided to hire a car next Thursday for the weekend, I spent some time ordering the items we've been wanting to get.  We'll have them sent to Lynne and go up to her place to collect them, plus our other mail.  We will also go to the chandlery to sort out what parts we need for the flue for our new stove.  They'll deliver the stove and the parts the week after.

After lunch we had unexpected visitors.  It was Scott and co from Kinver Canopies to measure up for our new cratch cover.  We won't have it before Christmas but at least it's on its way.  Their first attempt at making a template was thwarted by the wind and they said they'd have to come back another time but it dropped back enough to allow them to do the job.  Mick had a chat with them about pram covers and we'll have a think about that over the next few weeks.  We have money leaking out the door at the moment with the solid fuel stove and now a new central heating boiler.  We'll make the decision about the pram cover later when we've recovered and re-assessed our finances.

There has hardly been a boat moving in the marina for days now.  The sound of an engine and moving water brings people out of their boats to peer out.  It was a bit funny to see all the heads pop up above boats - we were doing the same.  Aside from curiosity, I think it's also the thought of the ice being pushed against other boats when someone moves.  It turned out to be the boat booked into the last berth empty on our pontoon.

There was another knock on the roof of the boat (it's the boaters' doorbell).  It was Ray and Diane from nb Ferndale bringing Mike from nb Isobel.  nb Isobel is currently moored at Barby but Mike is at Aston installing Ray and Diane's new kitchen.  Boaters love to check out each others boats.  Every boat is different and it is so interesting to see the different layouts and way each boat is set out.

Photos from today :
1. The view when I looked out this morning
2. The swans on their little un-iced patch of water
3. Daylight creeping up by the time I went for a shower
4. The water iced over, except for the swan swimming hole
5. A little collection of Christmas things from the German markets
6. Close up of the glass candle holder - I really like this one! 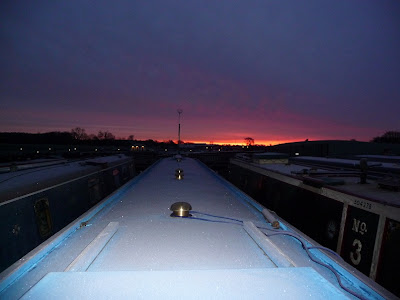 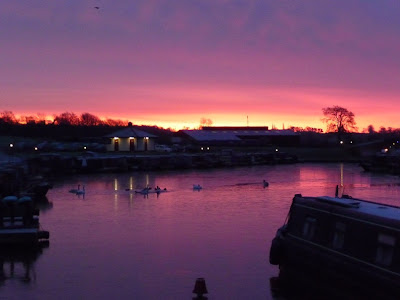 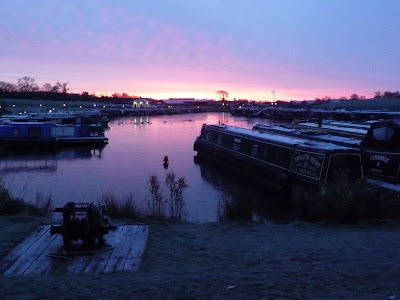 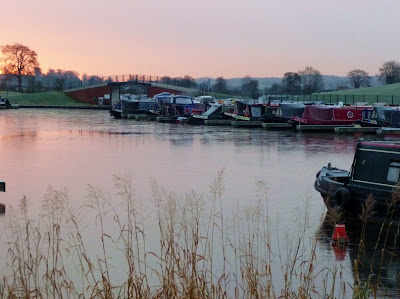 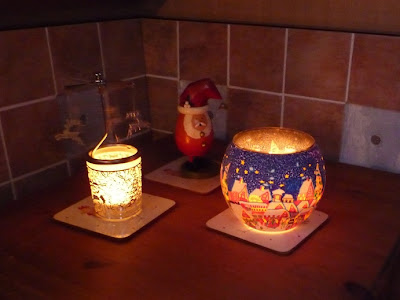 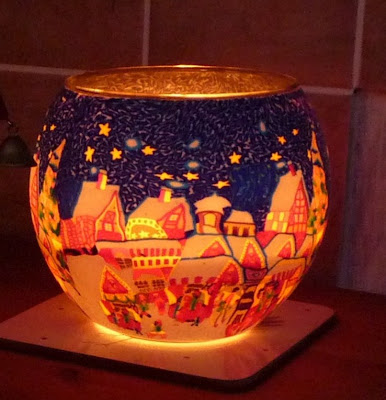