Last night was much milder but despite that, Mick says he was cold in the night.  Maybe he's coming down with something.  He certainly didn't sleep well and woke up rather grumpy.

Despite the milder night it was still icy on the pontoon.  As I made my way carefully to the gate I got chatting to another boat owner and mentioned that of the 3 Aussie couples in the marina, two of the women have taken a tumble in the last 2 weeks.  My mum is very superstitious about things coming in threes and I was hoping I wasn't next!  Happily, I was later reminded about Paul from nb Caxton and his stunt a few weeks back.  You can read about it here : Click.  I feel like I'm safe now.

We decided to walk into Stone again as we'd thought of a few other things we should have bought while we were there.  It was an icy morning so we took the tow path route along the canal.  It's often so muddy that the walking is difficult but today it was frozen solid.  It was a beautiful sunny day and definitely not as cold as yesterday.

Our first stop was the chandlery to try one LED globe for our downlights.  They're absurdly expensive but use very little power compared to the ones we have.  We thought we better try one before ordering a whole heap of them.

Then it was the hardware store for a few bits and pieces Mick needed.  Amazingly it was them who had the largest selection of Christmas decorations we'd found so far.  In lieu of the elusive Christmas tree I bought a little string of battery operated Santa lights and a couple of snowmen.  Not quite the same but better than nothing.

We walked back along the road as the ice would have been melting in the sun, leaving nice deep mud on the towpath.  Mick felt much better for having been out for a walk and was back to his usual self.

I quickly put on a second load of washing so I'd have two to put in the huge dryer in the marina laundry.  As it turned out it was a busy day and it was after 4.30pm by the time I managed to snaffle the dryer!

This afternoon Ray came and collected Mick for a beer at the Three Crowns and Diane came by for a coffee.  I went out to add another token to the dryer at 5.15pm and heard them returning in the dark through the marina field, with Barry along with them.  We'd been invited to dinner by Barry and Carol on nb Winton's Folly.

Photos :
1. Glorious morning!
2. And again
3. Mick on the towpath into Stone.  Still water and a sunny day
4. The path left through the ice by a passing boat
5. All the Gingers in a row 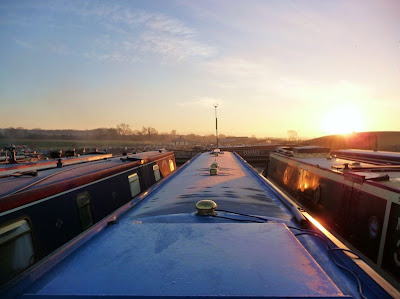 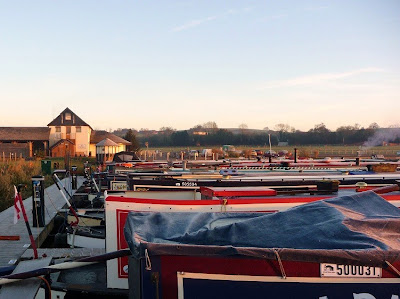 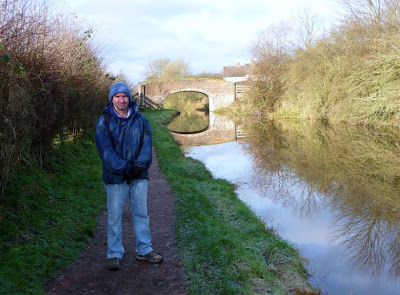 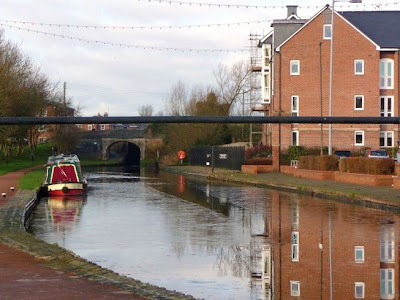 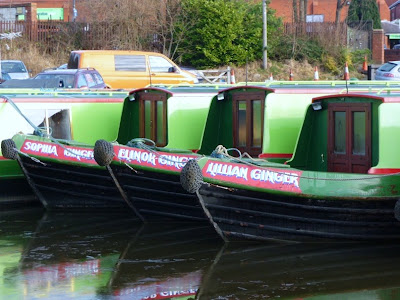