When we went to bed last night the marina was white with snow but over the course of the evening the rain had been increasing in intensity so by morning there was barely a patch of snow left.  The boat was strangely still too.  We got up to an alarming lean and peeked out to find the water levels had risen dramatically in the marina.  In fact, a quick check over at nb Stanley and the water was higher than it has been since we arrived in the marina.  There was no space at all beneath the pontoon.

All day the weather kept changing its mind.  We had rain, we had hail, we had blue sky and sunshine, then back to the beginning again.  We had to keep turning lights on and off as sometimes they sky got so dark we could hardly see and an hour later the sun was streaming in the window.

Today was a day of catching up on chores. I had a bit of tidying up to do - it had been neglected over the last week or more while I was working on my urgent job.

Mick had been nagging me for a few days to book him fares to New Zealand for while he's home in Australia.  He wants to go and visit his mum as her health has taken a further turn for the worse.  Working out the logistics of this was more than a five minute job, so it too had been deferred until my work was over.  So now his flights, car hire, hotel is all booked and ready to go.

We also booked a hire car from Friday so we can have a day out together before Mick flies out on Sunday.  There is always things we want to buy that can only be done with a car.  I'll go and visit Lois, our house exchange friend, while Mick is away and there is a couple of patchwork quilt shops in her direction.  So, although my original intention had been to visit her by train, I'll now drive so I can also visit the quilt shops.

Mick's been busy with maintenance.  He completely dismantled the drainage system for the shower and gave it a clean.  It probably hadn't been done since the boat was new and we noticed the shower wasn't draining as well as we'd expect.  The reason was obvious.... not a pretty sight!  So now it's all refreshed and ready for the next few years.   He's checked out the water pump, cleaned out the bilge at the back of the boat, sorted, tidied, cleaned and restacked all the stuff stored at the stern.

Late this afternoon we went for a walk to the other side of the marina to see what the river that runs beside the canal looks like.  The water level had continued to rise from the melting snow.  The river's burst its banks and looked more like a lake.  On our walk we noticed a couple of boats on other pontoons were on rather a strange angle.  nb Stanley looked fine.... I know you'll be reading guys!

On returning to the boat we had a quick look at the boat beside us.  It had been stuck up on the pontoon when the water level went down after the last flood.  It has a steel plate at the back which helps support the rear fender and that plate had been sitting stuck on the decking.  The boat was far enough back that the same thing would happen so we thought we'd pull the boat forward and re-tie it.  We couldn't move it at all!  We pushed and shoved and eventually discovered that the rudder was caught beneath the pontoon.  As the water had risen, the boat was wedged tight by the caught rudder.  I went and rounded up Ray and Andy for help and with us standing on the back of the boat to force it further down into the water Mick was able to push it away from the pontoon.

This afternoon I baked Anzac biscuits.  I made a batch of each recipe and although they were ok, they weren't as good as those I've made at home.  The golden syrup is different!  It's much lighter in colour and has a different taste.  We don't have a baking tray so I did the best I could with about 6 layers of aluminium foil.  It was ok, but did sag a little across the bars of the oven rack.  I also have no idea when temperature I'm putting the oven on!  It just has numbers rather than temperature markings.  The internet chose that moment to refuse to work so I couldn't even look up a conversion of the gas marks on the oven.  And finally, we don't have a cooling rack.  With only one rack in the oven, I had nothing to cool the first batch on while the next was cooking.  Oh dear.  The coconut batch turned out a bit better so they'll go along to our Australia Day get together tomorrow.

Today's photos :
1. There is no space beneath the pontoons this time
2. The river burst its banks and a little snow left on the canal towpath
3. And again
4. This boat needed its mooring ropes loosened
5. nb Stanley is nice and level 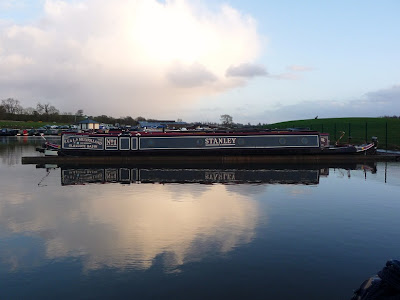 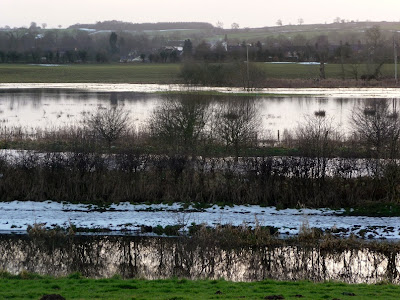 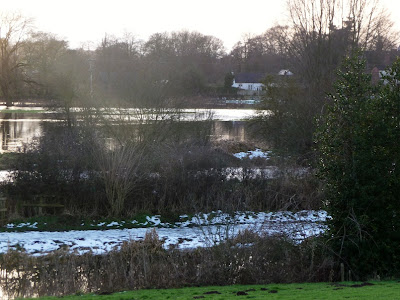 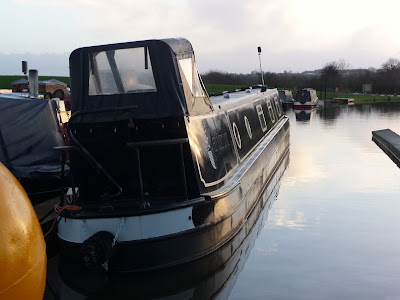 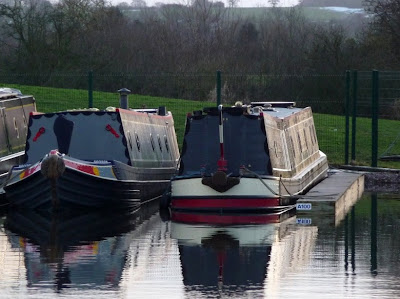