I've been flat out working lately and not had time for much else.  I was so glad of the day off on Thursday.

Yesterday the snow started melting and the weather forecast suggested it would be gone soon.  There's even been talk of potential flooding from the melting snow.  Someone had cleared the built up ice/snow from the pontoon up to just before our jetty so yesterday Mick got out there and finished the job - all the way to the end of the pontoon.  It kept him out of trouble for a good while.

We'd arranged with Barry and Carol (nb Winton's Folly) to have a bit of a card night.  Mick had never played Canasta and I hadn't played since a teenager.... memories of school holidays at Vic's place.  So after dinner we prepared for the long trek just 2 boats across.  It was snowing!  By the time I got inside their boat I was covered in huge splotches of snow much to Barry's amusement.  It was great fun and a very enjoyable evening.

Mick was most put out that all his hard work in clearing the ice from the pontoon was now covered in a new, thick layer of snow.  This morning he was out there clearing it all again.  The marina is covered in snow but the wide pontoon and our jetty coming off it are clear and almost dry.  It certainly makes walking around much easier. Thanks Mick! 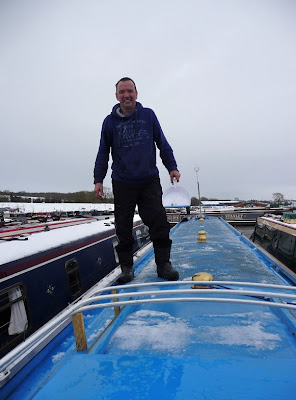 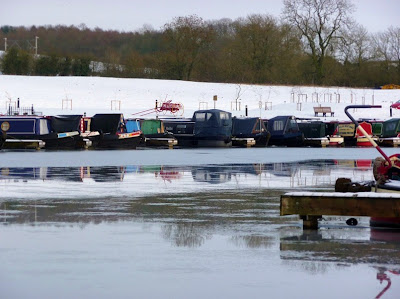 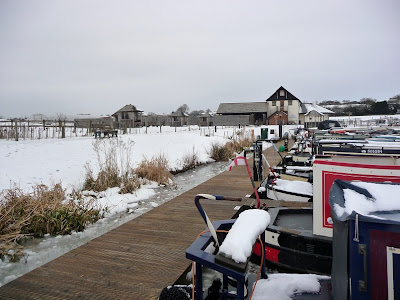