Making a run for it

I think we all slept well after a big afternoon yesterday.  nb Winton's Folly moved across to the other side of the canal this morning to have their gas bottle problem sorted.  They were happy with the service and price at Oxley Marine.

We had no tv reception last night so when Barry and Carol returned to our side of the canal we had a boaters meeting and decided that if there was a break in the rain we'd make a run for it and move along a bit.  Just as we were having lunch we noticed the rain had stopped.  The decision was unanimous - we'd go.  By the time we sorted centre ropes, pram covers and tiller bars a drizzle had returned but off we went in the rain.  There were no locks to deal with so it wasn't too bad.

There is an extremely narrow stretch after bridge 67 and we were glad the rain was keeping other boats away.  In fact we only passed one and luckily it was at a later bridge.

We were aiming for The Fox and Anchor near Coven.  Just after passing through bridge 69 we spied a familiar boat.  It was nb Two Jays.  We headed for the bank to moor in front of them and saw Jim and Joan waving madly from a window.  Barry must have worked out what was going on because he managed to pull in behind them.  We all gathered on Two Jays for tea or beer.... depending on who the drinker was... and enjoyed a catch up.  Barry and Carol hadn't been inside nb Two Jays before so there was an inspection of the boat.  Hmmmm.... I have a feeling there's going to be renewed talk of them having a new boat.

Jim and Joan had a bit of an experience with a youngster letting himself into the boat while Jim was preoccupied at the bow.  Jim thought it was Joan returning from shopping early and was startled to find the kid scouting around for things to steal.  That's a lesson learned!  We use a wireless door chime to alert us to anybody stepping on the boat or reaching in.

We have fantastic tv reception here so we've decided we'll stay the night and move on tomorrow..... the weather forecast is looking better for tomorrow. 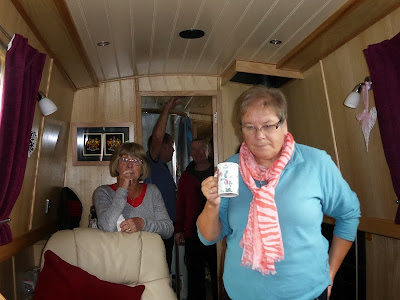 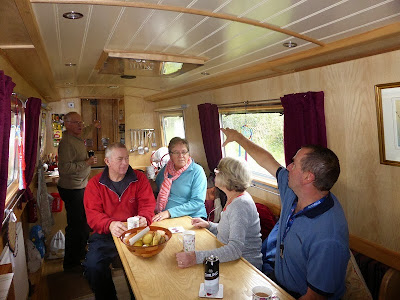