We had a very enjoyable 3 nights at Ellesmere but it was time to move on.  We are conscious of a potential meeting with Roger, who nb Parisien Star, in Middlewich in a couple of weeks time.  We're also trying to arrange to meet up with Mick's half brother, Peter, and Lindsay his daughter.  We've not met Lindsay yet!

So, we got up relatively early and didn't mess around over breakfast as we have been lately.  We waved goodbye to our "neighbours" as we headed out of the Ellesmere Arm and turned right back onto the canal.  We made a stop for water just outside the arm and then we were on our way.  It was an extremely foggy morning.  We've not had one quite so "thick" yet.  It made it a little difficult to see what was coming and the canal was nowhere near as straight as it was on the way to Ellesmere, it was constant twists and turns.

The fog eventually cleared and what a glorious day it was..... and the scenery was the best yet!  We'd been told the Lllangollen Canal was one of the prettiest and now we can see why.  We took so many photos.  It was extremely quiet for most of the day and by about 2pm we'd only seen 6 other boats - 2 of them called out to us that they were Aussies too.  One from Perth and one from Queensland.  Later in the day we passed the Black Prince hire base and then there were more boats about.

The highlight of the day was surely crossing the Chirk Aqueduct.  Running alongside it is a railway viaduct.  The aqueduct is so narrow that I could actually step off the boat and walk alongside taking photos.  There were quite a few gongoozlers having a good nosey at the boat.

Immediately after the aqueduct is the Chirk Tunnel.  It's 400 odd yards long with a walking path inside.  With the current in the canal it was actually hard going for the boat to force it's way through the water.  We also noticed the boat was pushed across to one side all the time.  It must be fairly shallow because there was several times where we scraped something on the bottom.

There was another shorter tunnel further on.  Coming out of the tunnel, there was a boat coming the other way and about to enter the tunnel.  They had a couple of kids sitting on the roof of the boat fooling around.  I don't know that it would be the wisest thing to let kids ride through a tunnel on the roof of the boat - I can't imagine how they'd survive if they fell overboard and were crushed between the boat and the tunnel wall!

There were only two locks today and the second one had a very attractive lock keeper's residence beside it and the people who owned it also had a beautiful garden.  The fellow was sitting out in the sun making rope fenders which they sold form the front of the house.  He was very chatty and wandered over to help me with the lock.  Thanks!

Tonight we're moored up at the village of Froncysyllte right before the Pontcysyllte Aqueduct.  The aqueduct was built in 1805, is more than 300 metres long and 38 metres above the river below. Just down from our mooring we can look across at the amazing aqueduct.  It will be an exciting thing to look forward to in the morning.

We got chatting to a couple who were going for a walk along the towpath after we moored up.  When they eventually walked on we were saying to each other how nice it is chatting to people that we'll likely never see again. 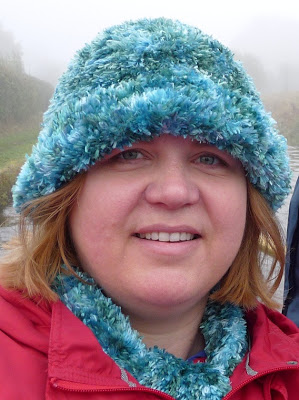 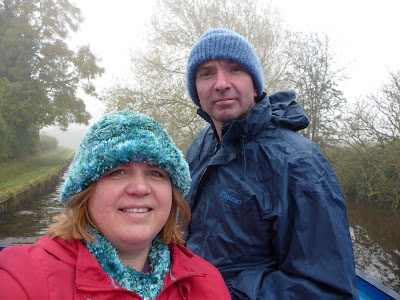 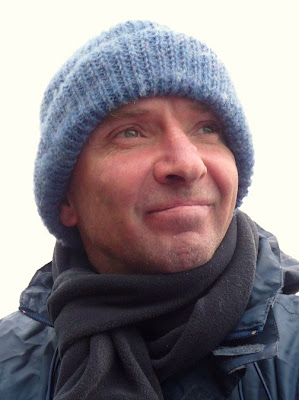 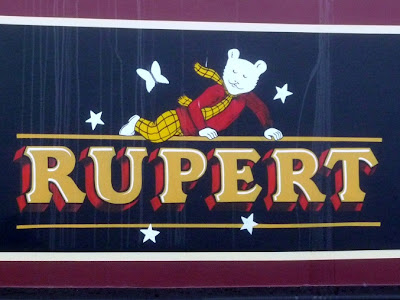 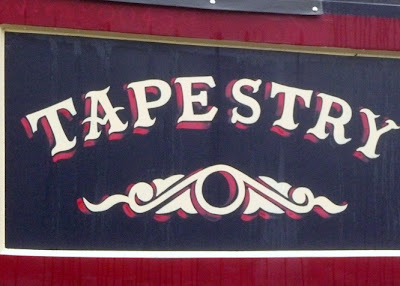 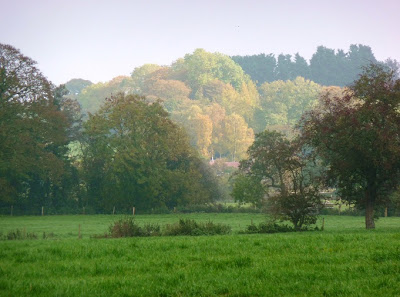 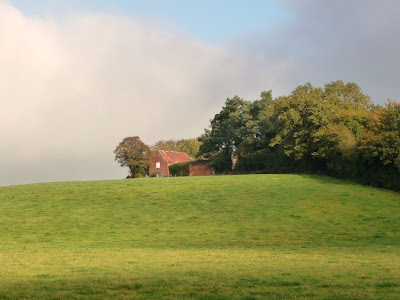 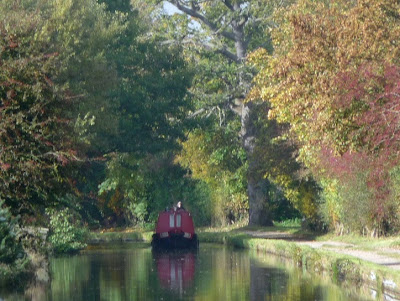 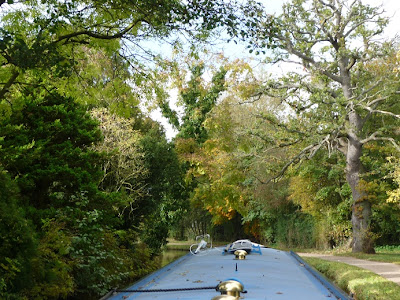 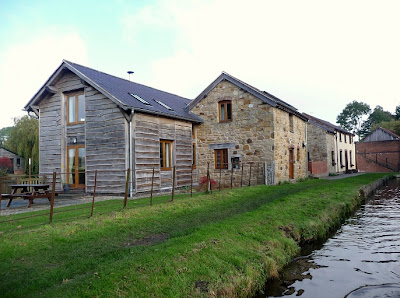 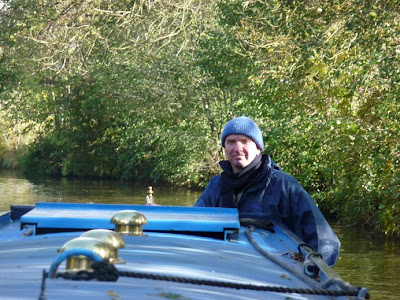 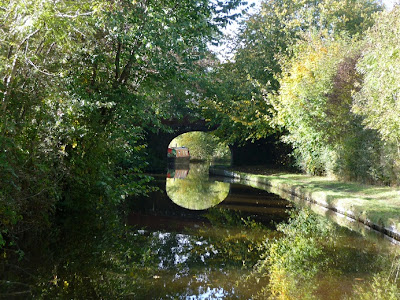 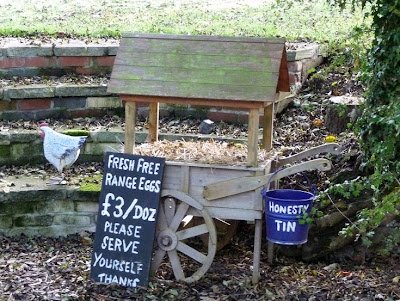 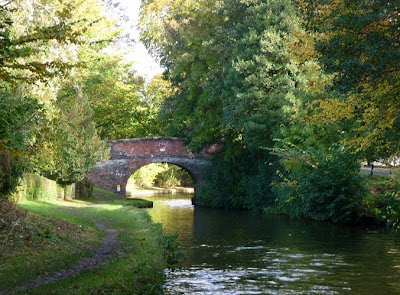 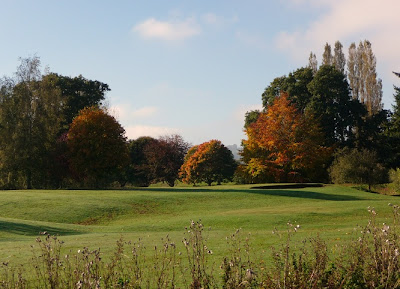 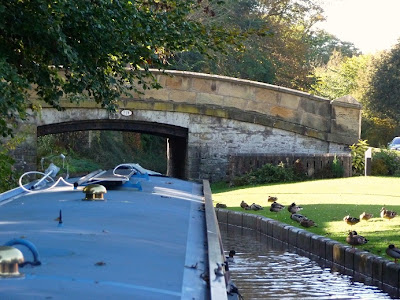 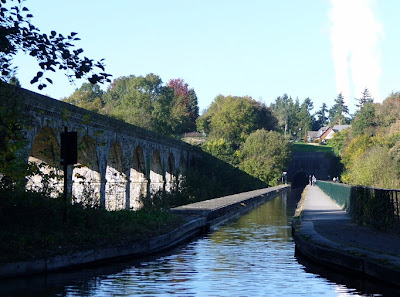 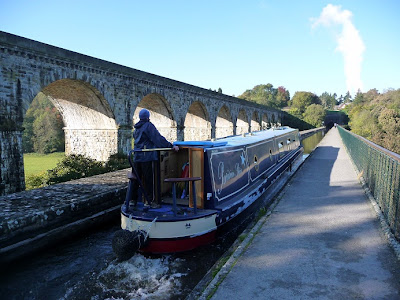 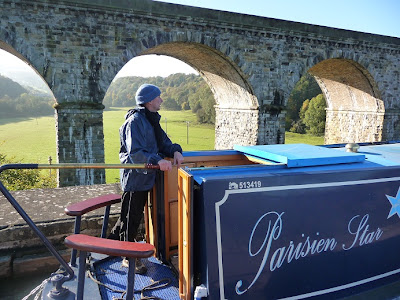 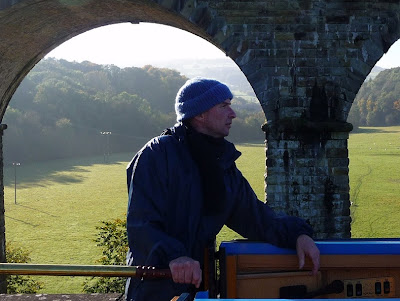 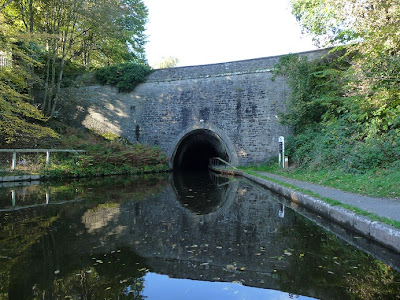 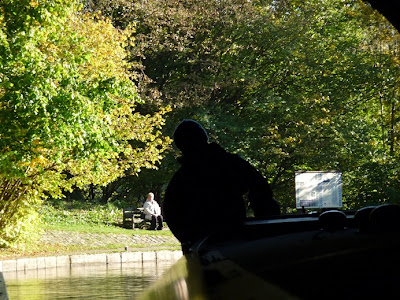 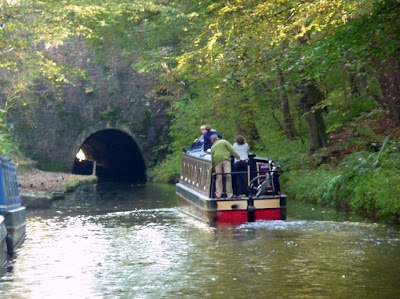 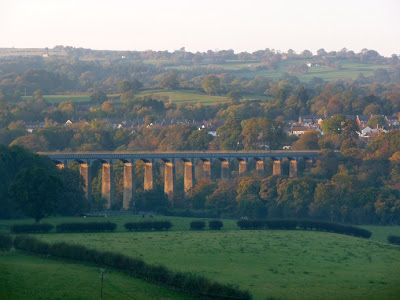 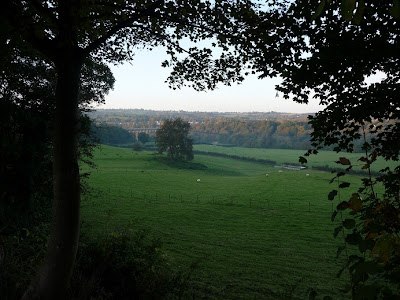 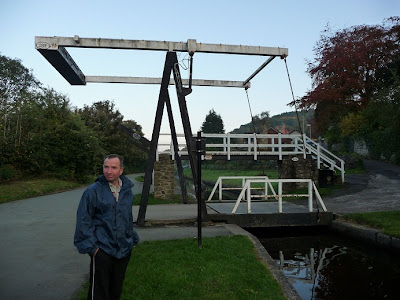 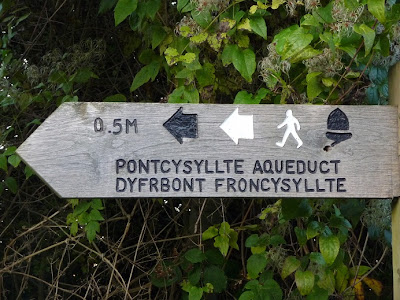 Hi Elli and Mick
It's so lovely to read much more upbeat blogs - it seems you've found the pleasure of the waterways now that you've grown more accustomed to the boat. It's wonderful to read and see the beautiful photos.

Thank you for taking the time to write, we so know what a commitment it is!

Have fun and enjoy the aqueduct and Llangollen!