A day in port - Rugby

We've again taken advantage of being in close proximity of a good range of shops.  The coal bags have been annoying in the cratch and we decided we'd really rather not have stuff stored on the roof of the boat.  Mick managed to find a large plastic storage container that's big enough for more than a bag of coal.  With the milder weather we won't be using as much as before.  He got busy with sorting out his tool collection and we now have an excess tool box to find a home for.  He has a shelf on the coal tub so we can still put things there but it looks so much neater!

Next was a couple of tough mats cut to size for the steps at the stern.  We had a piece of marine carpet type stuff for wiping feet on but it slid around too much.  This is a big improvement.

Mick also gave the side of the boat another polish, using Carnuba Wax (recommended by Roger... thanks!).  He's much happier with the result and it really does look a whole lot better now.  Pity the other side doesn't match.  The towpath on the Oxford Canal is on the other side so most moorings over the next week or so will enable him to give the other side the same treatment.  You can't really see it so well in the photo below but the colour is so much richer.

I spent the morning working and then decided to walk down to the cinema to see a movie.  It's something I rarely do as Mick doesn't like going.  There was a girlie film on... All You Need Is Love... so I went and saw that.  I'm caught up on my work so it's nice to not be constantly thinking of it.

Earlier today Mick called out that there was a lovely pair of labradors walking by with their owner on the towpath across the canal.  We always point out labradors to each other as they are our favourite breed.  I sat back down to my work and a lovingly kept boat chugged by.  It wasn't until it had gone past that Mick called out to me "Yarwood"!  Then it clicked... the 2 labradors.  Pity we didn't get to call out hello but it was too late by the time we realized.

This evening Carol and Barry will be back from their trip to Stone and we'll all head off again in the morning. 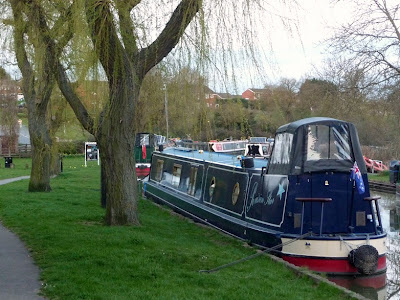 We will be winding and coming back through tomorrow morning so we might see you then??
Lesley