We had the earliest start yet this morning.... we were on the move at 8am.  It was lovely to cruise in the morning light and we've decided we'll do that more often.  There was only a short distance to go to reach the visitors moorings at Rugby.  It was a bit of hard going finding a suitable mooring for the 2 boats.  So far we've nearly always been able to moor up one behind the other which has been really nice.  Not today!

We started off with one on one side of the canal and one on the other but there was a fair walk down the towpath, up to a bridge, across the busy road bridge, down another little track, down the towpath on the other side.  Not ideal.  There was a boat at the end of the moorings that was pretty much in the middle of enough space for two boats so we politely asked if he'd be willing to pull his boat along a little.  He was very helpful and friendly and we had a nice chat with him.  Problem solved.  We're at opposite ends of the row of boats but at least on the same side of the water.

It's a fabulous place to moor with great access to shops.  We've had no tv for over a week now and it's been such a waste of time trying to tune it and work out what might be wrong.  Following a couple of suggestions to try a directional tv antenna we were pleased to find a Maplin store just down from the canal.  So, a new aerial and tonight we have tv again.  There'll be a bit more sorting out to do now to have it properly wired up.

This evening we went for a walk after dinner.  There's a new housing estate across the canal so we went to take a look.  The entire day has been warm and sunny - surely the mildest weather since we arrived in England.  It's been so lovely.

Today :
1. Another Aussie boat name
2. A pretty view through the bridges
3. Moored in Rugby 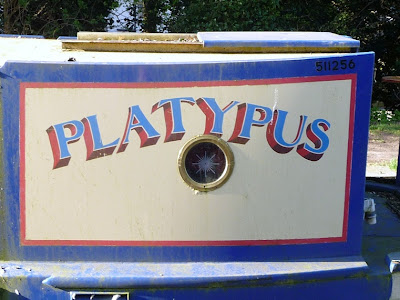 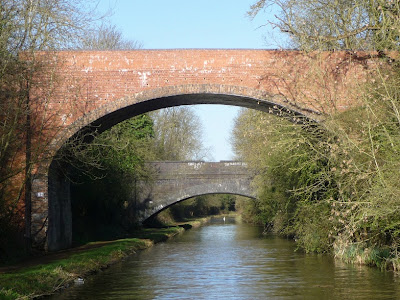 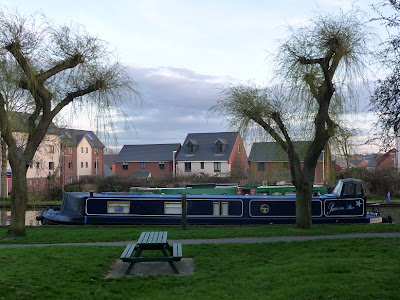 We know this spot well as we spent one winter iced in here. Great spot.

Was the facilities block in operation then? It's boarded up now. You wouldn't have had the view of houses either.
Elly

The facilities block has been closed for years. At least 7 that we know of maybe longer. There was several new homes alongside Tesco when we were there in 2010. They are probably finished there now. We had satellite TV reception there ok but had to be just in the right spot.