This morning we received a text from nb Winton's Folly.  They were just a mile further along than us and there was a mooring behind them.  We got ourselves organized and ready to head off.

Mick walked ahead to the lock and as I was steering the boat away from the bank the lady 2 boats ahead said they were about to leave too.  Her husband was just out taking the dog for a five minute walk.  With most of these locks left empty and with a bottom paddle left open (in accordance with CaRT sign on the locks), I figured by the time we filled the lock they'd be joining us in the lock. It took a bit longer than that with the poor lady rushing down to apologize.  Just when we were thinking we'd almost wasted the lock of water we'd been trying to save (it was leaking out the bottom gate), we saw their boat moving.

Before we reached the next lock the crew from nb Winton's Folly appeared around a corner.  They helped us down the lock and we moored up behind them at the bottom.  I put the kettle on to make 6 cups of tea... thank goodness we bought a couple more mugs as we'd broken a couple and had been down to the last 4 for a while.  It was lovely to have a chat to Carol's sister Diane and her husband Trevor.  We'd only had a chance to say a very quick hello when they'd arrived on Thursday.

It's a pleasant little mooring.  With a lock behind and a winding hole and bridge ahead, there's only enough space for two boats.  Suits us fine.  There is quite a large park opposite with the most enormous horse chestnut trees.  They are spectacular.  Pity we could grow one looking so lovely at home!

We had a few loose tiles in the shower when we got the boat and the grout had cracks in a few places.  When Mick cleaned out the shower pump he noticed there was a bit of water coming through from the shower into the space under the laundry hamper.  He did a repair job over Winter... re-gluing the loose tiles and refreshing the silicone around the shower base but a couple more had come loose and there was a bit of a leak again.  We ended up deciding to remove the tiles and replace them with shower paneling.

We ordered two sheets from Jewsons at Berkhamsted but they hadn't arrived when we passed there on Friday.  No sooner had we gone on too far to walk back for them and the store rang to say they'd arrived.  They'll deliver them to us on Monday.  The next problem was how and when to tackle the job.  We'd have no shower for a few days and we needed good weather to make sure it was all dried out nicely.  After Barry and Carol's visitors left we got talking about it and they said to just do it now and use their shower. The weather forecast is looking fine.

It doesn't take much to get Mick engrossed in a renovating project.  He turned and walked straight back into the boat and started pulling tiles off the shower walls.  He was right in his element surrounded by mess and cursing to himself.

Meanwhile we'd been dealing with another problem the last few days.  Our television reception was non-existent.  As usual Barry and Carol had fantastic reception on their rusty, clapped out old aerial.  We'd bought a new one earlier in the year and it had been doing ok, but not as well as theirs.  This week we've had nothing.  We had decided we should get one similar to the old one they have (it has wings!) so I walked up to Maplin in the centre of Hemel.

There was the most enormous mega-roundabout on the walk into town.  It comprised one giant roundabout surrounded by six smaller ones.  The cars actually go in both directions around the large one... clockwise around the outside lane and anti-clockwise on the inside lane.  As they approach each of the smaller roundabouts they have to give way as usual.  It looked complicated but it seemed to work.  If you want to turn into the road at your right as you approach the mega junction, you just go round the small roundabout and anti-clockwise on to the next one so you can get off again.

Maplin weren't able to help with an aerial but the fellow did say that Hemel is a bit of a "dead spot" when it comes to reception.  On the way back to the boat I went into B&Q and they did have one that looked about right.  The fellow was helpful and said it was the length of the box.  We can't exactly have one of those enormous house sized things on the roof of the boat.... we'd never get under the bridges.

When I got back I opened the box only to discover that it was actually double the length of the box as it was in two parts.  Useless for us!  Next came another boaters meeting... heads together brainstorming.  When we thought back we realized that the tv hadn't worked since we went to the Crick Boat Show.  And... at the Crick Boat Show we'd discovered that we should have an extra wire on our aerial.  nb Briar Rose had the same aerial as us.  Turns out that Mick had plugged it back in the wrong way around after sorting out the extra wire!  It will be back to B & Q in the morning.

By the time we sorted out the aerial and Mick had tidied up the bathroom mess it was near on 6pm.  Mick went to have his shower next door while I cooked dinner.

Photos :
1. Horse chestnuts
2. Six is a crowd : Diane, Barry, Trevor, Mick, Carol, and I have the little folding stool out of view at bottom right
3. Mick in his element
4. The mega-roundabout - you can actually see the cars are going in both directions around the large central island 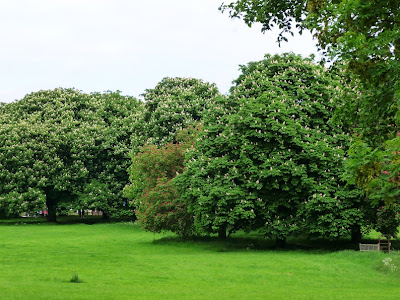 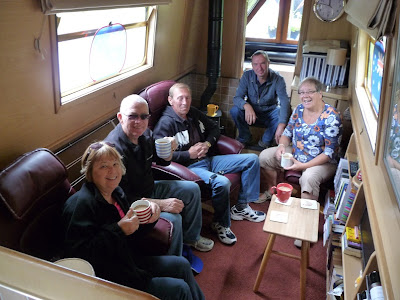 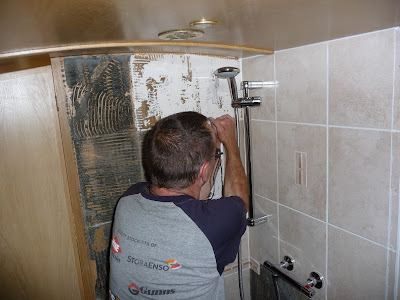 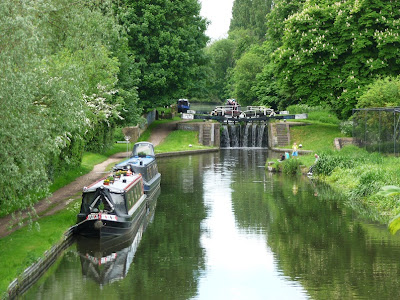 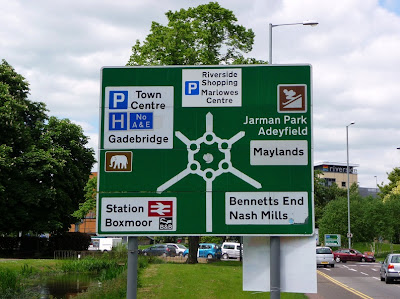 And is your Aries working now? We find you have to point it very precisely in poor signal areas.

That roundabout is called the magic roundabout -- and even has its own Wikipedia entry!