We're getting close to London now.  There's a different feel about the place and we're encountering walkers and cyclists heading for London.  I had a look on a map and we're about the same distance away as Bendigo to Castlemaine.  Not far at all then.

We played cards with Barry and Carol last night.  Those blasted trees obscured any chance of tv reception, didn't they Barry!  When the third passersby peered in the window at us Carol raced off and came back with her talking parrot.  She's going to have such fun giving people a scare when they look through the window like that.  We received a demonstration and were rolling around laughing.  I'm not sure if we were laughing at Carol's antics or Barry's embarrassment and exasperation.  This morning the parrot had pride of place above the tunnel light on nb Winton's Folly.  When I came out to investigate, Barry gave a demonstration of his own... just what he'd like to do to that parrot!

We did a few less miles and locks today because we had chores to deal with.  First was water.  There was a boat on the water point.... hose connected to the tap.... tap turned off.... boat locked up.  We knocked on the roof and stood around waiting a while but nobody came.  Mick unplugged their hose from the tap and hooked ours up - it reached to where we were moored behind against some wooden posts.  Midway through filling our tank the lady from the boat on the water point came out with hair wet from the shower, undid our hose right in front of us and put hers back on!  When Mick pointed out that we had been filling our water tank she basically said "bad luck, I want to top up mine!".  So we stood around a bit longer until she'd finished... what was the point in arguing as she felt we shouldn't have disconnected her hose in the first place.  I guess it was pretty inconsiderate of us to not wait while she had her shower and then filled her water tank while we had both boats moored in a spot you probably shouldn't be mooring while she used the water point for her own purposes.  She was still there as we cruised out of sight and it had taken a while to fill our two water tanks.

While at the water point we had sight of the first London Tube train crossing a bridge ahead.  It really is feeling like we're reaching the city edges now. We moved on through the lock and then to Bridgewater Boats for diesel.  Very friendly chap he was and we were away again in no time.  Just a lighter bank account.

The sights along the canal edges are looking more like we'd heard about the cities too.  Lots of unloved boats, piled high with "stuff", and even the odd houseboat.  I'm sure there'll be plenty more like this to come.

Coming through Common Moor Lock was interesting.  There was a huge dutch barge going down in the lock as I arrived at the lock.  The fellow called out that he was just heading to the winding hole to turn around so we could leave the gates open for him to come back up again.  When we swung open the gates to head out... there he was.  The boat looked far less imposing when I looked down on it from the top of the lock.  Then all I saw was the jumble of stuff stored on the roof.  Now we were faced with an enormous black bow that reminded me somehow of an army tank.  He waited well back to give us space to get out as there were moored boats on both sides.  We came out of the lock first and as we headed towards him I noticed he was struggling to keep his boat to the right side of the canal.  Mick waved him over to indicate that we'd pass on the left as his boat had now drifted across to that side anyway.

Barry followed suit behind but when I looked back after we passed the enormous vessel it's bow was now veering back across the canal and the boat was almost sideways across.  Poor Barry had to take quick evasive action... not an easy task surrounded by moored boats and with an enormous black bow bearing down on you.  We tootled on slowly glancing back now and then but nb Winton's Folly was very slow to appear around the bend.  Just when we were thinking something must have gone awry we saw them heading around the corner.  They'd ended up aground in the process of trying to avoid the enormous barge.  It was obvious the owner didn't have too good control over his boat but I imagine it would be very difficult to handle.

Our last lock for the day was at Rickmansworth, beside the Canal Centre.  The trip boat had a group of youngsters all carefully attired in their fluorescent life jackets.  A few of them were up at the lock learning all about it so there was plenty of assistance.  We moored up just below in sight of the Tesco opposite.  The town itself is lovely.  A very pretty and obviously affluent place with some wonderful old buildings and useful shops.

After our walk I sat down to work and Mick returned to the Post Office to post the letters and cards I'd written to our mothers. 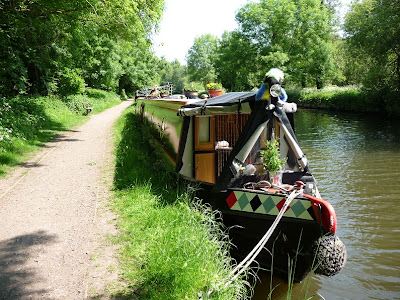 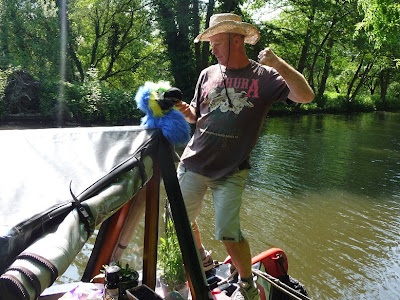 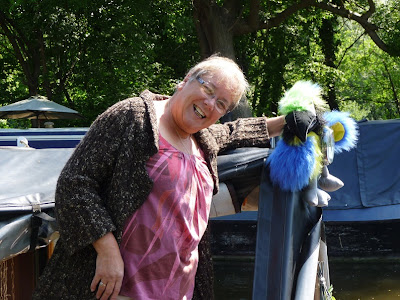 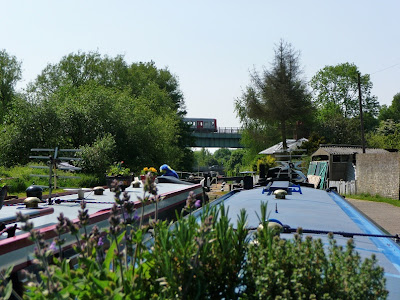 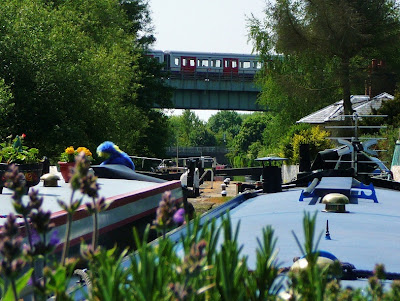 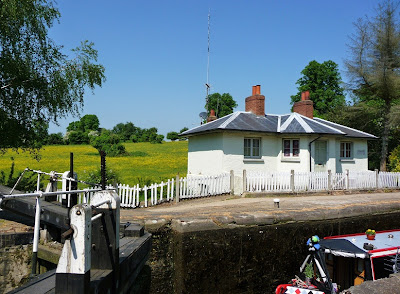 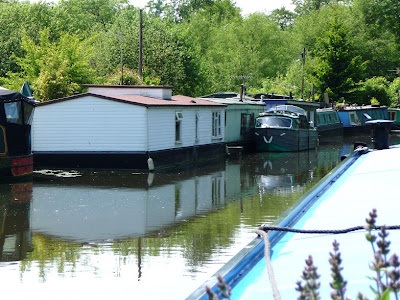 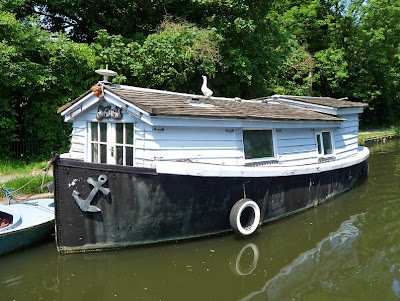 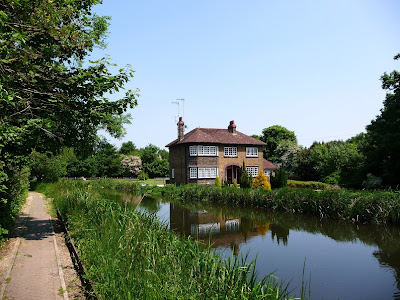 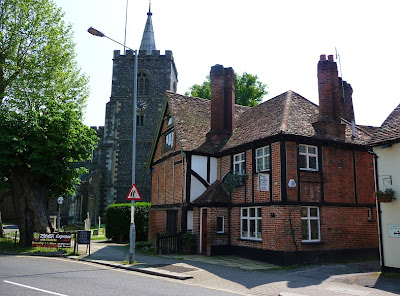 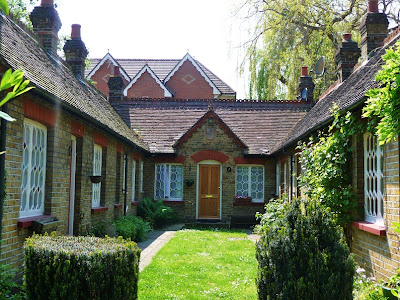 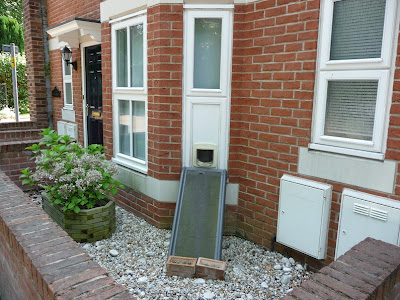 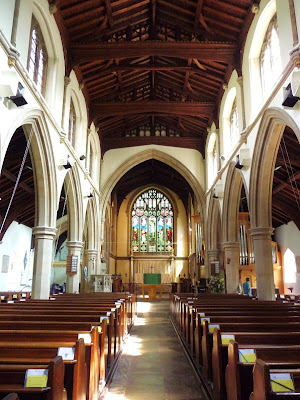 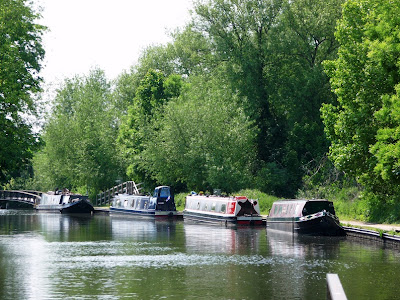 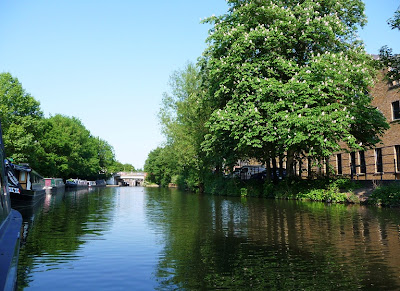 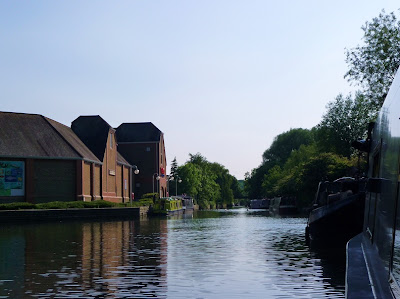