A day in port - Cropredy

No replies to comments until we move on.  It's a struggle with the internet.  Mick's come up with me today to my outdoor office and is holding the goggle in the air to get reception.  Not ideal!  Lucky I had typed the rest of the blog entry last night!

It cooled down overnight which meant a better sleep.  Before breakfast we went for a walk along the towpath to check out the new Cropredy Marina.  It’s not often you’d get to see a marina without water in.  It was a hive of activity and I’m sure I read the other day that they were planning to open mid August.  It looks to be a long way off finished and I’m not sure I’d want to be moored in a half finished marina.  There is a huge amount of landscaping to be done and without it the area looks pretty barren. 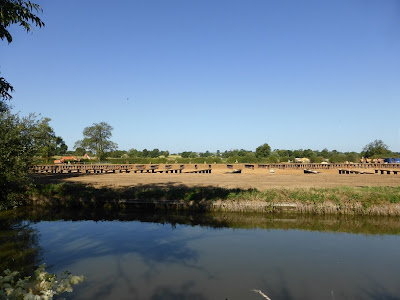 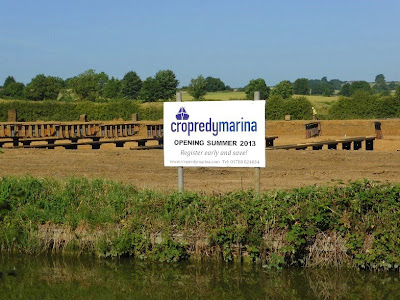 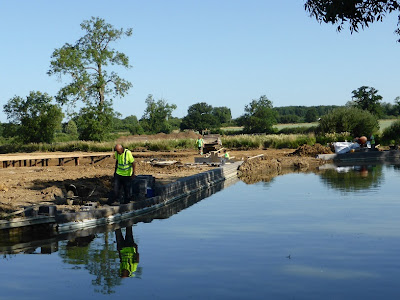 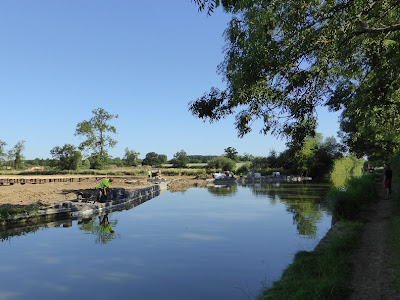 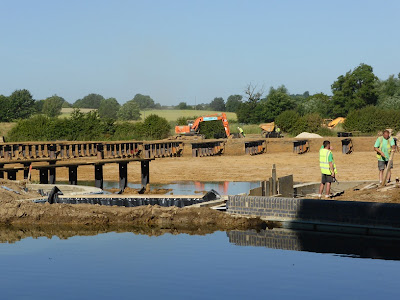 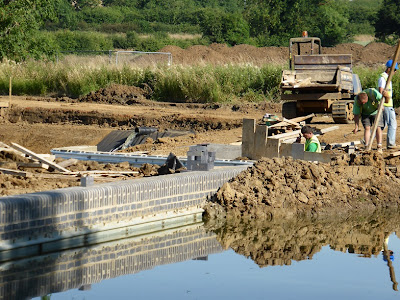 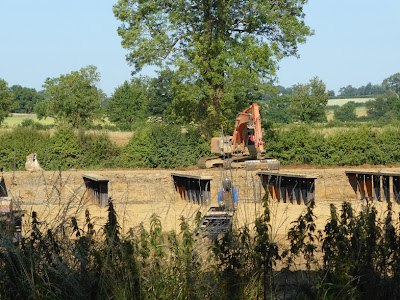 We had a chat with the fellow who had the vegetable garden beside the lock. We really like the way they grow climbing beans so took a photo to remember it. 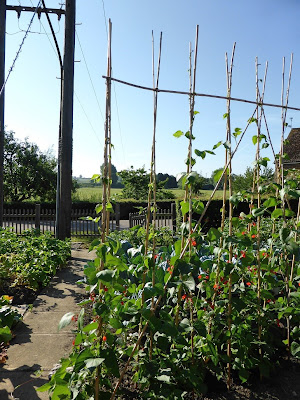 We figured Barry and Carol would be heading our way after Barry’s blood donor appointment in Banbury yesterday.  I sent a text at about 9am and much to our surprise they turned up half an hour later.  All the other moored boats had moved on early in the morning so nb Winton’s Folly is behind us again.
Having typed my blog entry for yesterday I walked up to the little triangle at the junction of roads in front of the pub to sit on the seat and use the internet.   I had files to download for work, and emails to respond to, accommodation to book for our few days in Wales in early August, and finally yesterday’s blog entry to post.  My laptop battery went flat on my first attempt earlier so I’d gone back to the boat to recharge it.  Just as I neared the end of my list the goggle went flat and then Barry and Carol appeared around the corner so we sat on the seat to chat for a bit.  Lovely in the shade. 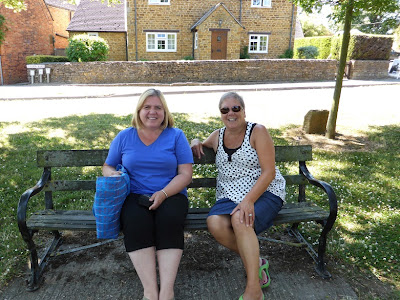 Heading back to the boat I spied the duck I’d seen swimming past our boat when we first arrived at Cropredy.  I wondered then why she was on her own.  Now she’s proudly showing off 12 cute little ducklings.  A passing walker said the same duck (she’s an unusual colour) had a huge brood last year too and only lost one through their growing up.  She does appear to be a very diligent mother..… watching over them carefully and not letting them stray too far away.  We’ve seen others where the ducklings are a long way from the mother and next morning half of them are gone. 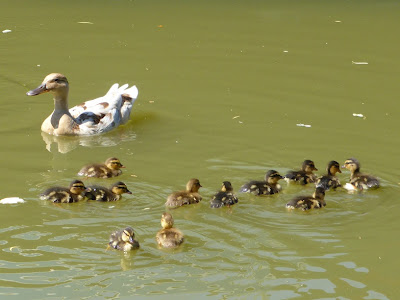 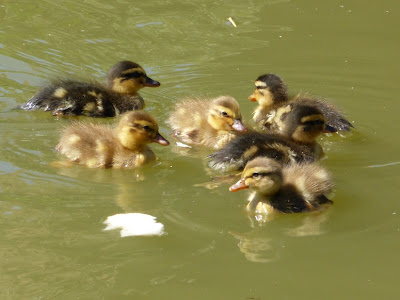 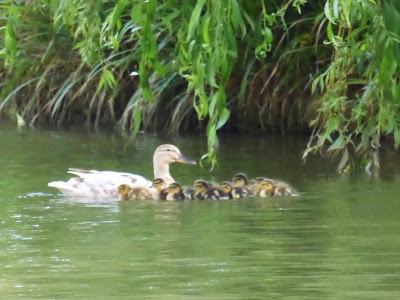 The news today must be all about the cricket.  Every second person who sees our Aussie flag makes a cricket comment.  At least it’s a change from “how long did it take you to sail that thing over here?” or “my cousin/sister/nephew lives in Perth”.  We’re a bit isolated from reality at the moment.  No tv reception, no internet, and only the weakest phone signal and that’s only occasionally.  I even walked up to stand on the bridge by the lock to try and get phone reception last night but had nothing at all.

We have a little routine for trying to keep the boat as cool as possible in the heat.  We open all the windows and portholes in the morning, taking the glass out of most of them.  As soon as the sun starts to peek through any of them, then that one gets closed and the blind or bung closed too.  This mooring is an excellent one as we’re in shade until about 1pm.  We’ve been using a couple of Aussie flag beach towels to hang across whichever side of the pram cover is getting the sun.  Overall it’s working pretty well.  We just can’t both go out at the same time in the afternoon as we don’t want to close up the boat.  We did it once at Banbury and came back to a sauna.  I’ve been told off for hanging the flag towel up the wrong way so I must pay better attention to that!

One thing we’ve really noticed since being moored here is the number of boats with horribly smelly engines.  With the side hatch wide open and the boats moving slowly as they pass us, the fumes come straight in at me as I sit at my “desk” working.  Or we have them waiting at the lock landing in front with their fumes pumping in through our open front doors.  Maybe they need boat MOTs! 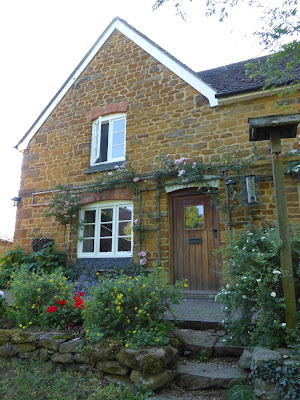 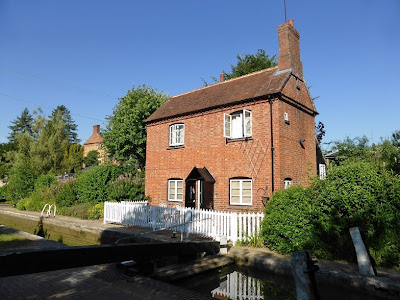 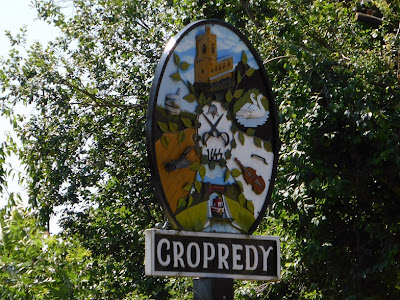 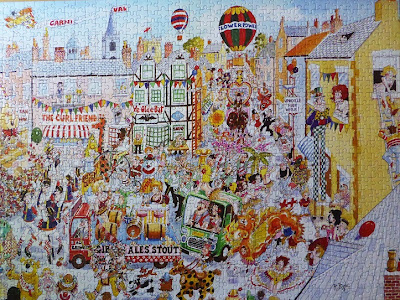 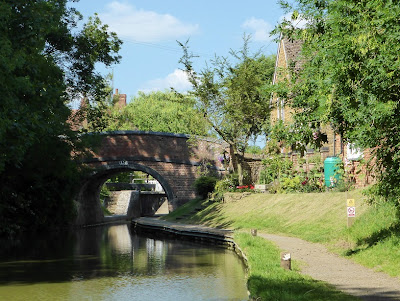 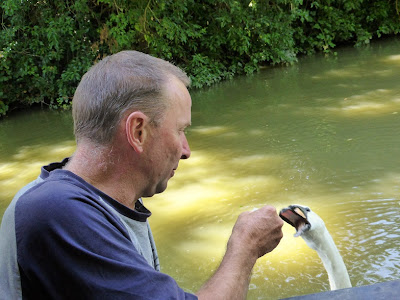 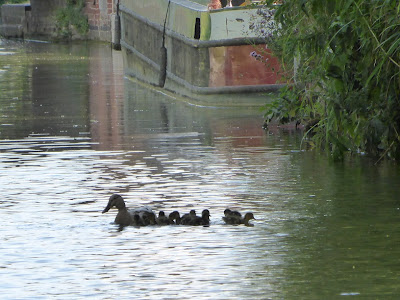 Goodness me Elly I'm pleased I don't have a 'goggle' as it sounds unreliable and painful! Of course some people use a 'dongle' and hang it out the cabin window on a usb extension lead! :-) :-)

The "goggle" (Mick's word for the Three wireless mifi) has been great up to now. Mick made me a little hanger that hangs it from our windows. We're just not in a good spot here.

But... funnily enough... I just spent 15 minutes trying it in every possible location and I have a single spot that gets a weak signal! I should have been more patient on Thursday when I tried this process.

Hi Elly. I do hope the 'powers that be' at Canal and River Trust don't read your blog and get yet more ideas. The introduction of a 'boat M.O.T' to test boat diesel engines for emissions would wipe out over 95% of narrowboat engines from current use, and render all those beautiful old traditional ones as scrap overnight. In the great scheme of things the amount of pollution from a boat engine on a canal is negligible, and as for the safety aspect, the Boat Safety Scheme already takes care of that. There are many of us canal boaters who believe that the sound (and smell) of a traditional old diesel boat engine chugging by is a joy to behold.

Peter, you're right of course. We wouldn't want to lose the lovely old traditional boats..... but they aren't the ones that pump fumes at us. :)
Elly