I woke with the daylight today - before 5am.  After nearly an hour of trying to get back to sleep I gave up and got out of bed leaving Mick to sleep on.  I got a last couple of loads of washing done and in the marina dryer.

The boat next to us headed out during the morning and what a difference that made.  Suddenly we had light streaming in.  I did a few hours work while Mick pottered.  We planned to head off after lunch.  By the time we were sorted and paid up with the marina it was 1.30pm.  Mick made a great job of reversing out of the mooring and turning to head out of the marina entrance.  As usual the wind had increased as the day went on.

Originally we intended to moor for the night at Bugbrooke Wharf but there was a lot of boats about there already.  We continued on beyond bridge 35 and have moored up just shy of Heyford Fields Marina where we need to be at 8am tomorrow.    It's been incredibly windy and the hedge beside us looks like it's being blown sideways. 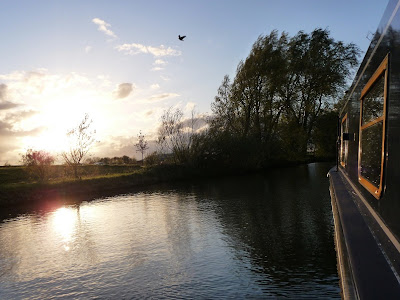