We had a meeting with the Eberspacher man this morning so made sure we got up early.  He duly arrived right on time, and buried his nose in the engine hole straight away.  About 2 minutes later I heard the heating turn on!  What?!  Don't you just hate that.  I've turned that darn thing on about 20 times since it stopped working and not a thing happened.  He just thought he'd press the button before he started doing anything with it and the stupid thing worked.  We had a little conference and decided he'd take the heating unit away with him to test it and see if they can determine what's wrong with it..... because there obviously is something wrong with it, even if it's intermittent.  The error message that's being displayed (it has a list of codes and when it fails to start as it should it stores an error code) means a couple of possibilities so it's better they take it and work out what's wrong rather than letting him go and then we find it won't start again.

The heavens had opened during the night and it rained on most of the morning.  I had a phone call for work and a lovely chat with my employer.  Dare I say I miss the office?! By then it was looking marginally better outside.  We were low in the grocery department as I'd missed out on going to Aldi with Diane the other day so we decided we'd brave the drizzle and go before lunch.  The first part of the walk was across the marina field (getting increasingly muddy) and then down a lovely country lane (the road at the lowest point beginning to flood).  It was pleasant despite the rain.  Once we turned onto the main road the walking was less pleasant.  The cars and trucks were rushing by at such speed and there isn't naturestrips here like we have at home.  We kept getting sprayed with water from the trucks.

Aldi looked pretty much identical inside as they do at home.  The products were different though as I think they try and stock local stuff when they can.  We have a lot of Aussie made products in the Aldi stores.  I picked up some of my favourite German products - Lebkuchen which Claudia, my German friend, often sends me at Christmas.  It was strange choosing vegetables because I always look where they come from and try and choose local.  Egypt? Peru? Slightly different to what we're used to but I guess it's hard growing veg in such a cold climate.  We were pleased to find we could pretty much get by with groceries from Aldi and an occasional topup from a big supermarket because there's always some things we want that they don't stock.  And now, with the most perfect of timing, I have an offer of a trip into Stone to shop in the morning!  Thanks Elaine!!

On the walk home the rain had stopped but the mud/flood factor had increased.  The slightly flooded road was now deep with water so we had to walk on the little side bridge to get past.  The mud in the marina field was also sloppier.  I'm going to have to find a pair of boots!  I did buy a really cheap pair that are like wellies on the foot part and soft padding from the ankle up.  They were only £9 but I didn't realize the sizing here was different to at home and they're way too big.  We've been using them for walking across to the shower as they slip on your feet without having to pull them on and they have a good grip on the pontoons.  They're no good for going walking though - they're so loose on my feet and not much better on Micks.

It took us 2 hours to complete the shopping mission.  I can't believe Mick so happily browses around a supermarket!  He'd carry on like a pork chop if he had to come to into a supermarket at home.  He's even taking an increasing interest in the cooking - he did start with this at home and said when we were away and he had time he'd help more.  Last night I worked and he actually turned out the whole dinner.  It was good too!  Recipe in separate blog entry coming up.

This afternoon I talked to Claudia which only serves to make me hanker for a visit.  I'm working on it.

The temperature cooled this afternoon but the skies cleared.  Just as the light started to fade we went for a walk around the marina.  It was a lovely evening.  I really enjoy being in a marina late in the day like this.  It was the same at Aqueduct.  The water is so still, no boats moving about, everybody's tucked inside, smoke whisping from chimneys.

Photos :
1. From the marina bridge - no wind so still water
2. There's our boat, over there!
3. Our pontoon is on the left with every boat neatly moored facing out
4. Can you spot us?
5. A shake of a bread bag and they emerged from between a couple of boats
6. Mum, dad, and five brown tinged youngsters 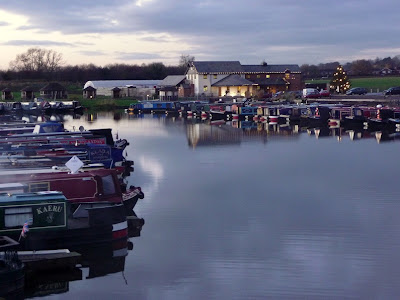 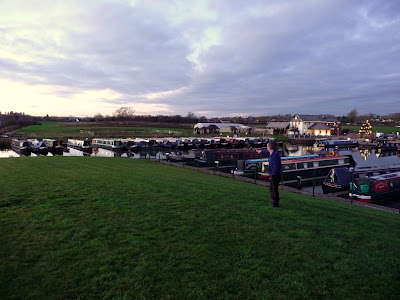 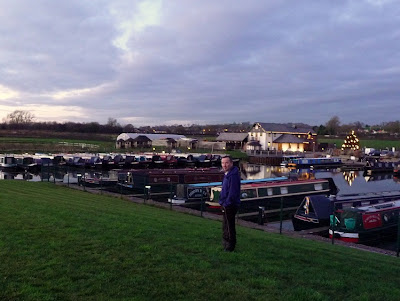 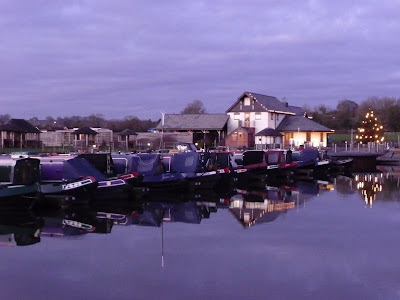 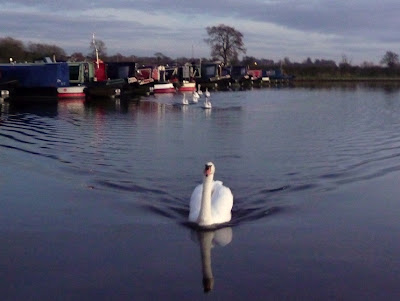 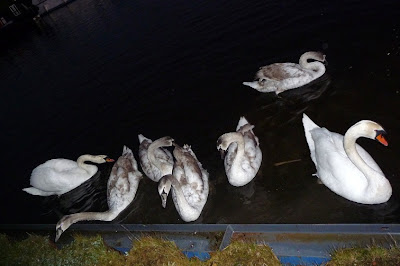