We were up later than usual last night - me so I could make contact with the office during business hours - Mick to watch the end of a movie that finished at midnight.  This morning we had the biggest sleep in yet, not getting up until nearly 9am!  It was a glorious morning and we felt we were wasting it by sleeping in.

With the sky blue, the sun out, and the wind relatively calm we decided we should brave the trip to the loo pumpout and diesel filling station over at the marina bridge.  Ray from nb Ferndale came along for guidance.

You have to go out the exit, onto the canal, and back in the entrance to get back to our mooring.  All good coming back from the canal into the marina entrance but our first attempt once we turned to reverse towards the pontoon wasn't quite far enough across to be able to pull the boat back.  The angle was much too sharp.  The wind was picking up when Mick moved forward into the open area of the marina basin to try and re-align and we were pushed of course.  He was getting rattled by the audience so decided to turn around so we approached from the opposite direction.  At least this way the pontoon opposite kept the boat from blowing off course.  It really doesn't take much wind to be a nuisance when you have such a broad flat surface for it to hit. With the front fender against the that pontoon it was much easier to turn the stern round to where it needed to be.  Next time we'll give it a go facing the way we were originally but not letting the bow of the boat past the end of the opposite pontoon.  It's a good buffer from the wind and a good way to keep the bow from blowing out of alignment.  Practice, practice, practice.

I booked tickets to Germany for next week.  I'm going to visit Claudia, my long time friend.  Since my very first trip to Germany in 1999 I've dreamed of seeing the German Christmas markets and finally I'm going to get there. (It's ok Diane, we'll still go to Birmingham!)  It's been 2 years since I've seen Claudia so we're looking forward to catching up.  It's only for a long weekend but it will make a nice visit!


Photos of a sunny day :
1. The pumpout and diesel are on either side of the marina bridge so you moor underneath to use the services
2. Mick and Ray
3. Looking back towards our mooring from the bridge
4. Mick at the gate to our pontoon 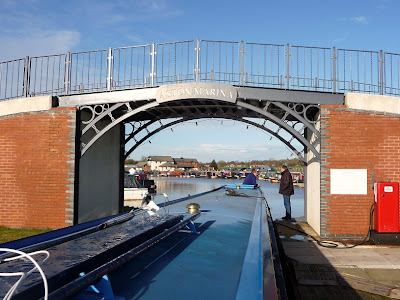 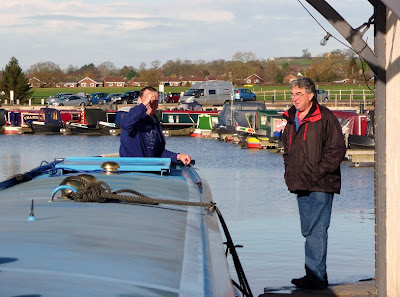 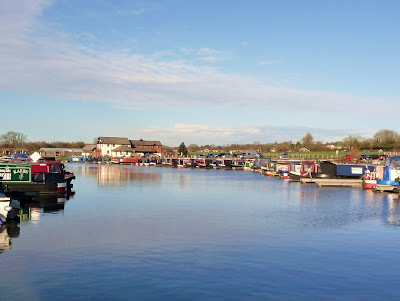 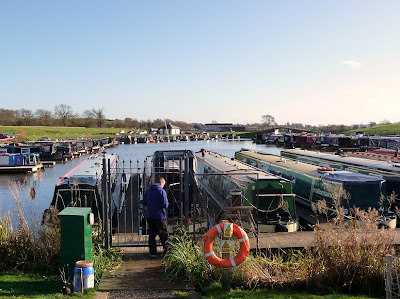