This morning I got up to check the weather report on my phone and hurried back to bed.  Goodness it was cold when I put my feet on the floor.  It was only 5 degrees inside the boat and much colder outside.  We actually had ice both inside and outside the portholes.  There was a very heavy frost and everything looked white.

We still hadn't decided when we went to bed last night whether we'd move on today or not. By the time the heating had warmed the boat up a little (we still haven't set the timer - job for tomorrow) and we were sitting down to breakfast the sun was out and the sky was blue.  Perfect day for cruising.  Tomorrow was forecast to have some rain so we decided we'd move on.  The towpath was really icy and it was cold.  Really cold.  The ice was thick on our mooring ropes and we've decided our centre rope will go inside the cratch each night.  Mick's going to need a pair of waterproof gloves.  When I bought a pair at Nantwich the week before we set out he said he didn't need them.  Changed his mind now.

We decided we'd do the 10 locks to Hassall Green which would be a good way along Heartbreak Hill.  I steered into most of the locks which gave me some practice.  Most of the locks were in pairs which is something we haven't seen before.  It was very pretty countryside along the way.  We also saw a gorgeous lock cottage and another lock that had a new development of housing beside it and the nearest house was for sale.  I'd guess in Summer they'd be sick of the cranking sound of the locks being worked.... especially with it staying light so late.

We really noticed the difference in these locks.  The paddles were all ground paddles rather than on the gates.  Mick, in his enthusiasm at operating the first lock of the day, madly wound one side until the paddle was all the way open.  The force of the water pulled the boat forward so hard that it whacked into the front gates despite my furious reverse to try and counteract the draw.  Under threat of being the steerer through every lock from now on, he was a little more careful at the locks thereafter.

Just before the second last lock we passed under the M6 motorway.  It was strange to be watching the cars and trucks whizz by as we quietly passed underneath.  Mick likes watching the tv program about Eddie Stobart trucks.  We had it in Australia and now he gets to watch it more regularly here.  As we finished the second last lock I waited patiently for an Eddie Stobart truck to pass on the motorway behind so I could get Mick a photo with it in the background.  He didn't ask why I was standing there waiting when the lock was already full... he knew exactly what I was doing!

The last lock for the day was at Hassall Green lockside store.  We decided to fill the diesel tank but what an awkward trick it was to get from the lock and then across and backwards into the spot where the diesel is.  We moored up shortly after with the sound of the M6 in the background.

I did a few hours work while Mick went for a walk to check out what was happening at The Romping Donkey.  We could see it was all fenced off.  When he got back a couple walking by stopped to chat and told him that the man who had bought the pub had started renovating without respect for it's heritage listing.  Now he's been stopped and nothing is happening there.  Just a couple of caravans with people living in them.... squatters it seems.

Today's selection :
1. Early morning on our mooring in Wheelock
2. Frost along the canal edge
3. Lovely morning with our solo visitor
4. Heading towards a lock
5. Oh goodness, don't touch the edge!
6. Not much room to spare
7. A frosty lock cottage with a pair of locks in front
8. - 11. Mick's photography efforts and my steering efforts
12. Eddie Stobart overlooking nb Parisien Star 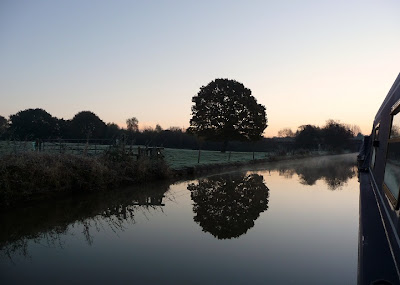 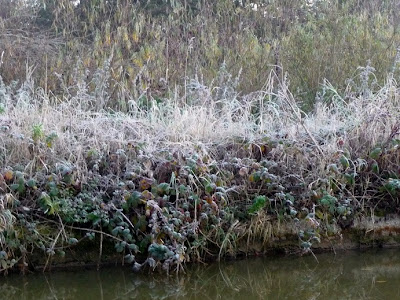 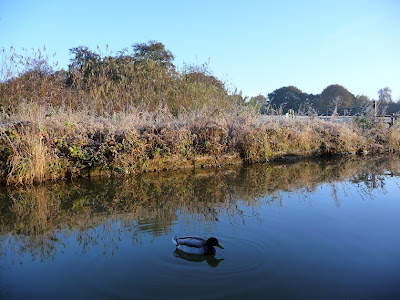 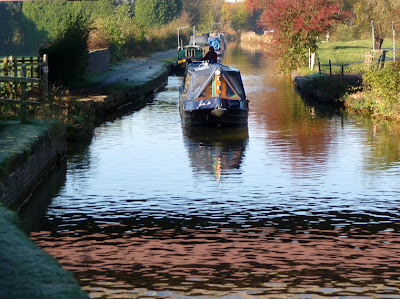 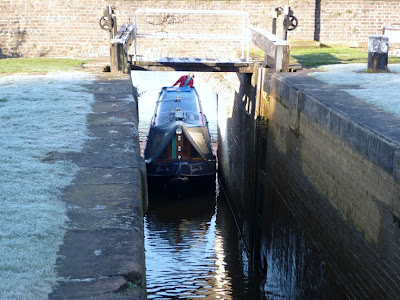 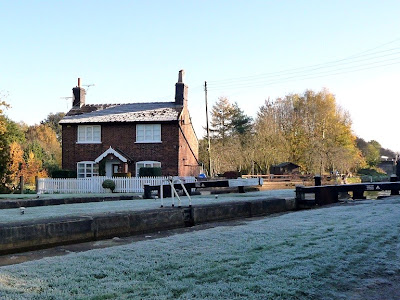 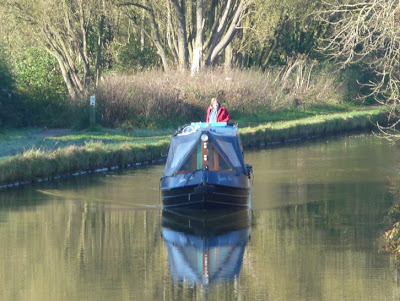 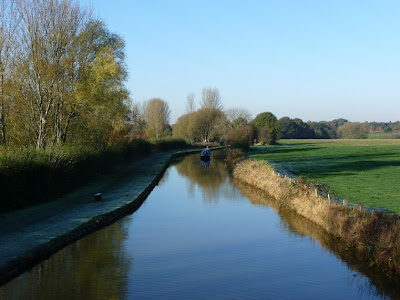 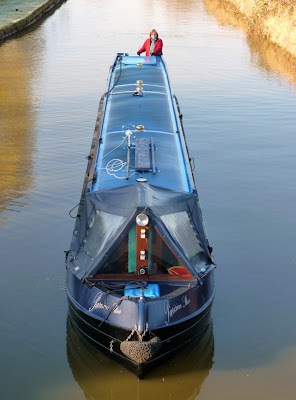 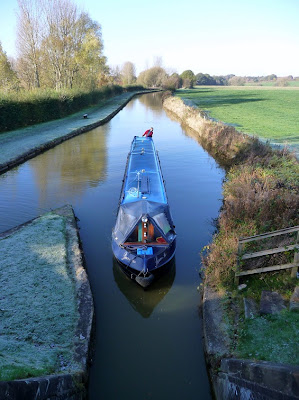 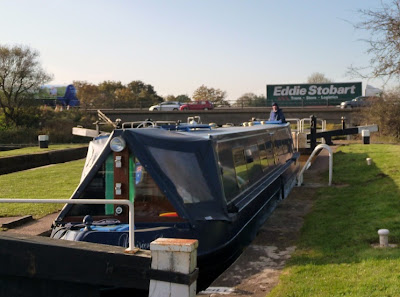