I was just thinking the other day that it's been quite a while since we discovered anybody new planning on a narrowboat adventure from Australia or New Zealand.  No sooner did I have the thought and I had an email from Lesley, a lady from Victoria who had been in touch early last year.  It seems she and her husband have advanced their plans since we were last in touch and they've now booked their tickets for April and are even in the process of having a boat surveyed.  Hope to meet up with you on the cut one day Lesley!

If there is anybody else reading who is planning to come to England and buy a narrowboat do leave a comment and say hello!

It was a chilly morning yesterday with a thin layer of ice on the marina and the boat next door sparkling in the sunlight from the frost.  I had a bit of a false start with getting the fire going again.  I put some coal on the red coals leftover but ended up having to start afresh.

I still had some catching up to do with chores and then a few hours work which took a little longer than expected.  It was 9.30pm by the time I packed up.  I did have a break in between for a coffee with Jim and Joan on nb Two Jays.

This morning was a little less cold and I did a better job of the fire.  The coal is a messy business and now I know why it's Mick's job.  I'm so glad of the stove though, it feels so much cosier.  I had another big day of work ahead and also trying to catch up on missed time due to my unexpected trip back to Heathrow.

The big excitement of the day was having our pram cover installed.  I felt the telltale rocking of the boat which warns of a visitor and when I pulled back the rear hatch I got a face full of rain and a voice saying "That'll be covered in a minute!".  It was a little more than a minute but it seemed that in the time it took the boys from Kinver Canopies to drink their cup of tea the canopy was up.  They also replaced a couple of the straps on the cratch cover that they'd installed a couple of weeks ago as it was a struggle to roll up the sides and tie the straps around... in fact I just couldn't do it.  All's good now and I've had a little lesson in rolling up the side flaps.  Thanks guys!

There has been a lot of boats on the move today.  There must have been half a dozen come in the marina entry.  Curiosity always sends me to the front to look out and see who it is.

The weather outlook for the week.   It isn't looking too bad overall.

Photos :
1. A helicopter flew into the marina for lunch
2. Scott showing Mick the new canopy 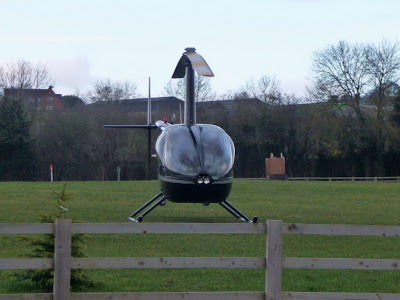 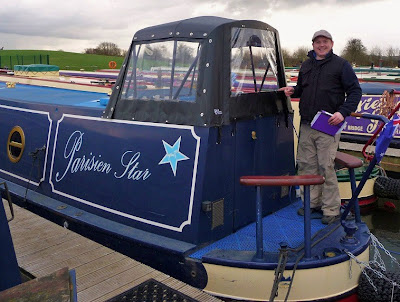 Heather & Roger are leaving Melbourne mid March for a week cruise on a hire boat in Scotland on the Union & Clyde canals via the Falkirk Wheel.

We will then motor around Scotland for a couple of weeks before boarding our share boat at Napton for our annual April/May cruise, our 10th year of Spring cruising.

This year we plan heading for Cheshire via the GUC, Nth Stratford, Worcs & B'ham, Droitwich, Severn (weather permitting), Staffs & Worcs, Shroppie, T&M, Bridgewater (Dutton breach permitting), Maccs and back via Fradley. About 800 lock/miles. If this won't work, we'll do something else, no rush.

Hi Roger & Heather,
Nice to hear from you. How many weeks do you get on your share boat? What's the boat name? We'll look out for you!
Cheers,
elly

Hi Elly,
It sounds like you could do with some morning sticks a.k.a kindling. You only need a handful but they get the fire roaring in no time. They sell them in Morrisons but will be cheaper from wherever you get your coal.
X Yvonne

Thanks Yvonne,
We do have some. It's my first experience of a coal stove and I over-estimated how easily they would catch on from the coals. This morning I decided there were too few red coals so put down some sticks first. Worked a treat.
Elly :)

Hi Elly, our share boat is called Celtic Kiwi and we will be aboard for 6 weeks