Last night I placed a grocery order with Ocado and they called me asking if it was ok to come early because they had another delivery to the marina.  Fine with me... in fact I would have chosen the earlier timeslot if it had been available.  When I went out with one of the marina trolleys, Gil and Malcolm were out in the carpark with a trolley too.  I think we should ask Ocado if they'll give us a delivery discount if we order our deliveries to come together.  Most weeks there is more than one.

I got a good few hours work in before and after Ocado and then I had planned a walk into Stone for this morning.  Diane came along with Banjo the dog. I had a couple of things to collect from the post office, the most important being some pre-cut hexagon papers from my very favourite quilt shop back home : Threadbear Quilters.  Mick had been in to collect them for me and posted them so I could go on with my sewing while he's away.   I just discovered there is a Thread Bear in Surrey so I might have to check it out!

We walked the towpath into town as there hasn't been rain lately.  It's so much nicer when it isn't ankle deep in mud.  By the time we returned to the marina it was after 1pm.  There was a red helicopter beside the marina building.  A different one to the other day.  It seems they come for coffee or lunch but today would have been a disappointment as the marina was closed.

I didn't bother returning to my work as there was only 40 minutes until afternoon tea.  I finished packing away the shopping, washed the dishes and got my coffee in a thermal mug.  As I went down to the back of the boat to get my shoes, I did a really good job of catching my last 2 toes on the edge of one of the doorways.  Oh my goodness.... I was hopping around in agony.  It's something that always reminds me of my mum as she's the accident prone one.  I ended up putting on a pair of padded boots instead of my shoes as the boots are much looser.

We had the usual suspects in attendance and an enjoyable chat.  The talk is turning to where everyone is planning on heading first when they leave the marina.  I'm becoming more aware of the fact that some of these people whose company we've enjoyed so much will be cruising off in the next 3 or 4 weeks and we might not see them again!  We'd like to think we'll see them "on the cut" but who knows.

Roly was particularly keen to discuss toilets today.  In fact, he said "Can we go back to talking about loos?" when the discussion veered away.  His interest was composting loos as Gil has one and Ray and Diane had been to visit Carol and George on nb Rock n Roll and they have a new composting loo.  I still can't get over how much time we spend talking about toilets.... or toilet paper.

So now it's back to work for another few hours and a much appreciated delivery of coal from Roly (the man with a van)....  and I have my 2nd last toe turning blue.

Boaters teaparty photos :
1. Dot & Gordon, Roly
2. Gil, Diane & Ray
3. Jim - looking like he's resting his chin on the thermos
4. - 5. Joan and I - I don't remember why the silly face but there's rarely a serious moment at afternoon tea! 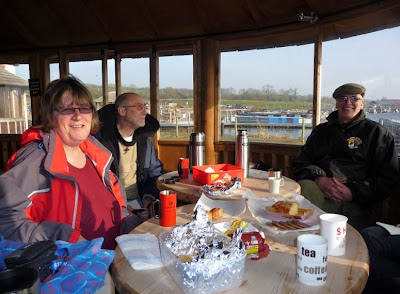 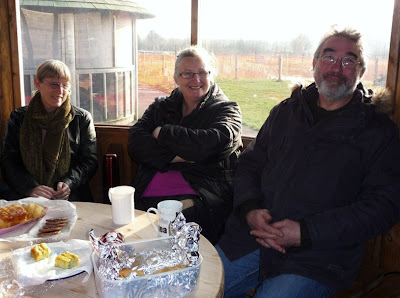 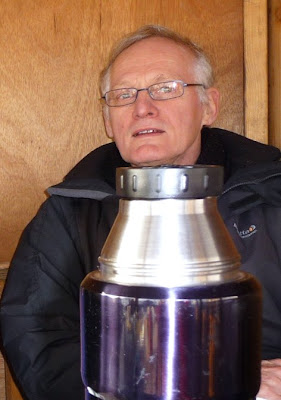 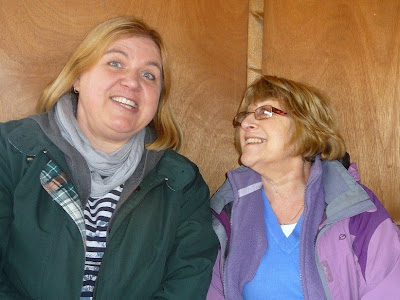 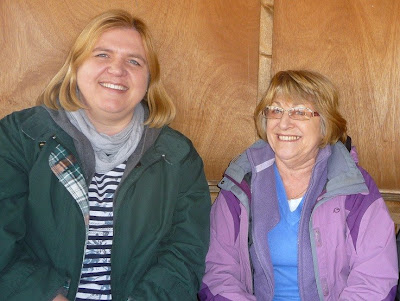