Tuesday I had Ed, who was recommended by the marina, come out to replace some "bits" of the loo system.  I'd ordered a service kit.  Mick had intended to do this but by the time he gets back we'll be itching to get cruising so decided it was worth paying someone to do the job.

This won't be anything new to other boaters but for our friends and family back home... here's my day....


I’m up early to try and get work done.  I have 3 hours completed when I look at the clock and see it’s 11am.

I knew I’d need to have the bedroom empty before Ed arrives and he’ll be here about 12.30 so I figure I better make a start…. knowing it wouldn’t be an easy process.  First I fold up the duvet…. as well as I can anyway because it’s a particularly thick one.  So I’m trying to keep the duvet in as small a parcel as possible, which is impossible.  As I squeeze it through the door into the bathroom I knock down the box of tissues and the little tidy bin.  I’ll get them on the way back.  Cross over the bathroom to the opposite door and the towels are swept off the towel rails.  I’ll get them on the way back too.  Then through the doorway into the dinette, knocking down the sock drying hanger that’s on the rail.  The hooks go flying and the hanger is in a mess on the floor.  I’ll get them on the way back.  Now….. do I put the duvet in the dinette or keep going to the living room?  I’ve still got the pillows and sheets to go so figure I’ll put the duvet on the armchairs.  Reach the next doorway… maybe it would be better to hold the duvet up higher but the doorway is narrower at the top and after an attempt I'm worried I'll know the smoke detector down.  So...  lower but I swipe the kitchen utensils that hang on hooks beneath the end of the benchtop.  More hooks and more stuff all over the floor.  I’ll get them on the way back.  I can’t believe it’s taken this long to move an entire 14 feet along the boat!  Through the kitchen I decide to lift the duvet above my head and almost throw it onto the armchair on the other side of the cooktop.

Then come the pillows and sheets.  I take them one by one, not wanting to cause a repeat performance of the chaos on the floor, and stacked them in the dinette.  As the cushions and porthole bungs are also stored on the other dinette seat and the small suitcase is also there it’s a mountain of stuff now.

Coats and shoes are all stuffed into the bedroom cupboard, my little “bedside box” is in the bathroom, the extra mattress section that’s used to make the bed wider is on its end at the bottom of the bed.  The mattress itself is a nightmare.  It’s heavy and there’s just nowhere to manoeuvre it.  Where's Mick when I need him! If I put the mattress beside the bed I won’t be able to get past and Ed is going to need to be able to get into the space beneath the bed from that side.  The only option is to try and stand it on it’s end at the bottom of the bed.  I struggle and struggle with it and eventually get it so it’s hanging half off the end of the base of the bed.  Dragging a heavy mattress across a slatted base isn’t easy at the best of times. When I try to stand it up it keeps collapsing back on the bed base.  After about 10 minutes of wrestling with it resting on my head I manage to squeeze it back so it’s wedged against the ceiling.  My hair is like a birds nest on top of my head.  It still makes it very difficult to get into the boat as the little shelving unit at the end of the bed prevents the mattress being pushed across far enough to leave a walkway but it's as good as I can do.

As I walk through the kitchen I look at the dishes and it reminds me I need water.  The tap was frozen first thing this morning so it had to wait.


Just as I finish my sandwich my phone rings – it’s Ed and he can’t get onto the pontoon through the security gate.  The water tank is about 3/4 full so I squeeze the hose to get it out of the front of the boat and dangle it over the edge of the pontoon while I hurry back to the tap to turn it off.  Then down to the gate to let Ed in.

Another go at wedging the mattress against the ceiling to keep it out the way. I show Ed the slatted panel that forms part of the base of the bed so he can access the loo pump.  Of course it’s against the wall, not on the walkway side so he has to lie across with his head buried in the cavity over the other side.

After lots of digging out instruction books for the loo, ringing boat chandleries looking for a "bowl seal" which I should have ordered, and turning power and water on and off and on again, the worn out parts are replaced and we can try flushing the loo.  But when I turn the pump on nothing happens.  Ed dives back under the bed base to discover that an electrical connection has come loose.  Power back off, sort out the connection, power back on and we hear the pump start doing its thing.  I flush it several times, waiting in between and it’s all good.

Ed packs up his tools and off he goes.   I have a chat with Ray and Diane who are sitting on the bench seat up by the walking path.  I know I still have the dishes to do and the mess to tidy up so I don't linger.

I look around at the chaos of the boat and start the process of putting it all back together.   When the bed is made and everything’s tidy,  I’m about to sit down to work again and something tells me to flush the loo one more time.  I press the pedal…. nothing. I text Ed but he’s well on his way to his next job.  He rings and explains to me where the loose connection is.  It means I’m going to have pull the bed apart again.

I turn off the power to the loo pump.  I take away the duvet again, and the pillows.  I pull out the extra section of mattress and stand it at the end of the bed.  There’s no way I’m going into battle with that mattress again so decide I’ll just crawl underneath it and remove the panel of the base of the bed with the mattress on my head.  I can’t see a thing.  Down to the front of the boat for the torch then back under the mattress.  How on earth do you hold a mattress up with your head while lying across the base of the bed, shine a torch in the cavity and use two hands to push two wires together?  I’m really not sure if I want to laugh or cry.  I hold the torch under my chin and somehow manage to get the wires together.  As soon as I let them go they come apart again.  The connection is way too loose.  Back to the front of the boat to rummage through the storage beneath the front steps where Mick keeps tools etc.  I eventually find a roll of electrical tape and return to my cave beneath the mattress.  I can’t hold the wire, the torch, and unroll the tape at the same time.  Back to the kitchen and cut a length of tape that should do the trick and back under the mattress.  At last it’s looking like it should work.

Turn on the power again, try flushing the loo and yet again put everything back in order.    I see the water hose is still out on the pontoon and remember I haven’t finished filling the water tank.  Back outside to complete that job.  By the time I put away the hose reel and get back in the day is gone!

Photos : What a difference from this morning to this afternoon 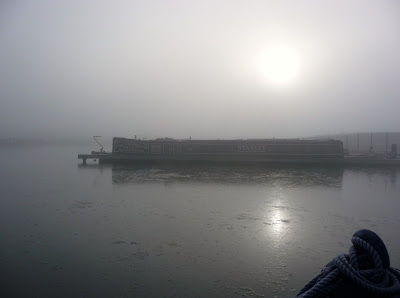 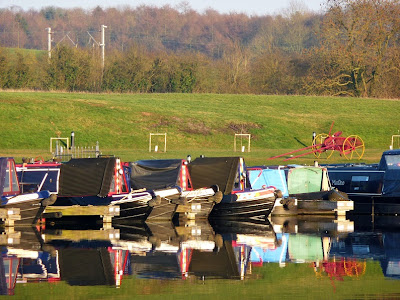 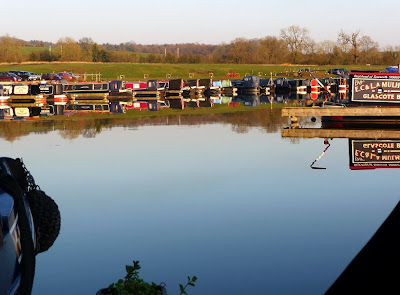 And I bet non boaters say 'what do you do all day?'

I wonder myself what I do all day!