Wooohooo!  We cracked 1,000 miles as we moored up this afternoon!

It was another glorious sunny day and the destination today was Froghall.  We decided we'd turn back and moor up somewhere along the way back towards Cheddleton.  It was a bit of adventure boating today with a few encounters.

The first was coming to grief at the low bridge by the Black Lion pub in Consall Forge.  We realized our tv aerial wasn't going to make it under the bridge.  There's a bit of water movement just there as it's where the canal leaves the path of the river.  So, it wasn't a good spot to try and bring a narrowboat to a stand still right in front of a bridge.  The wind and the flow of water pushed the boat across to the left and against a rocky bank.  We had all sorts of trouble getting off there again and in the end it took a bit of work with the boat pole to hold the stern away from the rocks and a bit of forceful reversing at the same time.  We were on our way again.

Next we noticed an extremely long branch had caught across the bow and was causing drag and problems with steering.  I hung over the end of the bow and managed to manoeuvre it off using a mooring pin but that wasn't the end of the story.  Peering around once the branch had gone I could see we still had a large log and a jumble of twigs still caught there.  I couldn't reach them.  Mick got the boat hook from the roof and managed to free the clump of debris.  On our way again.

At Flint Mill Lock we paused under the bridge just before it to have a cup of coffee in the sun.  We just held the boat beneath the bridge. A group of lady ramblers passed by and stopped for a chat.  It's always a good reminder of how lucky we are to be having this adventure when we tell somebody new.  We often get stunned silence.

We had no intention of attempting the extremely low tunnel but couldn't believe it when we opens the lock gates and saw how low the gauge was for the tunnel.  We couldn't exactly remove our mushroom vents!  We moored for lunch outside the old copper works after turning in the winding hole just before the Froghall Tunnel.  We'd bought some smoked mackerel at the Stone farmers market so we had that for lunch.  It was delicious.

The plan was to moor overnight at Consall Forge.  It looked like a lovely spot as we passed it this morning.  There are some extremely narrow sections on the way into Froghall but we'd not seen a single boat on the move all day... or yesterday.... or the day before.  As we headed back out again and into the longest section that is unpassable we encountered another boat.  We spied them before they entered the narrow section and tooted our horn.  He quickly hit reverse to move out the way.  We chatted briefly as we passed and when we looked back they were in all sorts of trouble stuck against the side of the canal.  We slowed to make sure they could get going again.

The lovely mooring we'd spied at Consall Forge was free - right opposite the pub.  We tied up and began the chores involved in settling in.  Mick tried tuning the tv.  Nothing.  Internet?  Nothing.  Phone?  Nothing.  There is rarely a time that there's something on tv that we particularly want to see but today is one of them.  We wanted to watch Great Canal Journeys!  We ahm'd and ah'd about what to do and in the end we decided to move on again.  We'd had tv at Cheddleton so we'd go back there.  Only another hour.

There is a section of the journey where the canal shares it's course with the river Churnet. After having most of the trip on the Caldon through rather shallow waters it was lovely to feel the boat swimming like a fish through the deeper river water.

As we left Cheddleton this morning we had both noticed a section of concrete edging just around from where we moored last night.  We thought we'd have a go at mooring there.  The boat on the private moorings opposite us last night had an incredibly smelly engine and ran it for hours late in the day.  We closed all the windows to keep the smell out but when it came time to cook our dinner we wanted the ventilation.

So here we are moored against the concrete edging.  We can't quite get the boat into the bank but there'll be nobody passing by.  It's one of those times we wish we had a couple of those large tyres that everyone rushed off from the marina to Aldi to buy a few weeks ago! 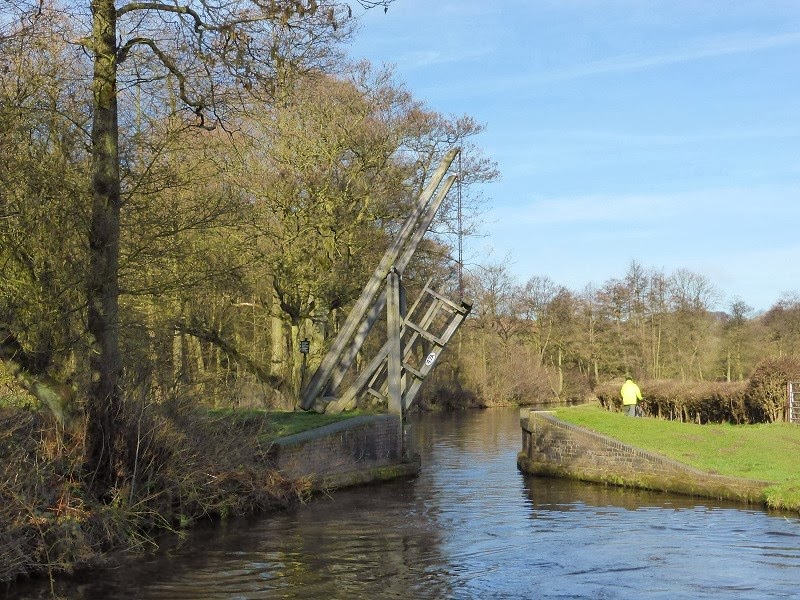 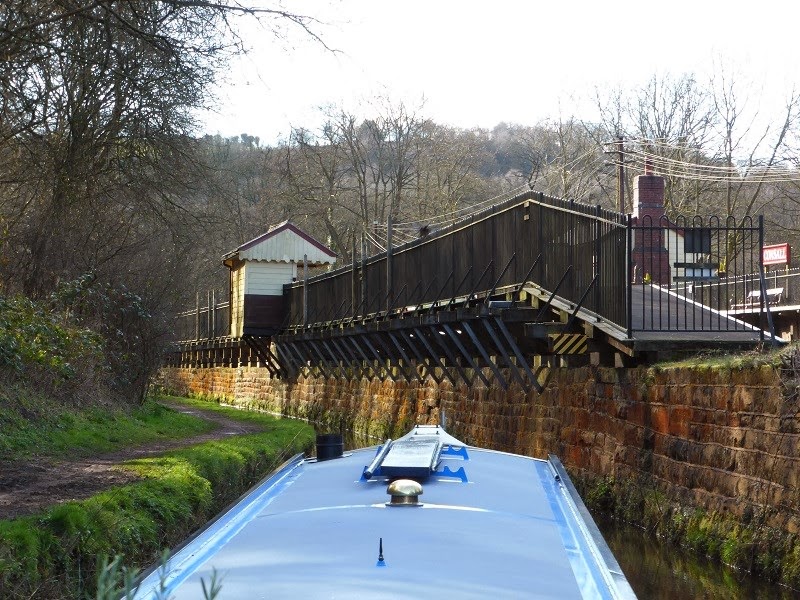 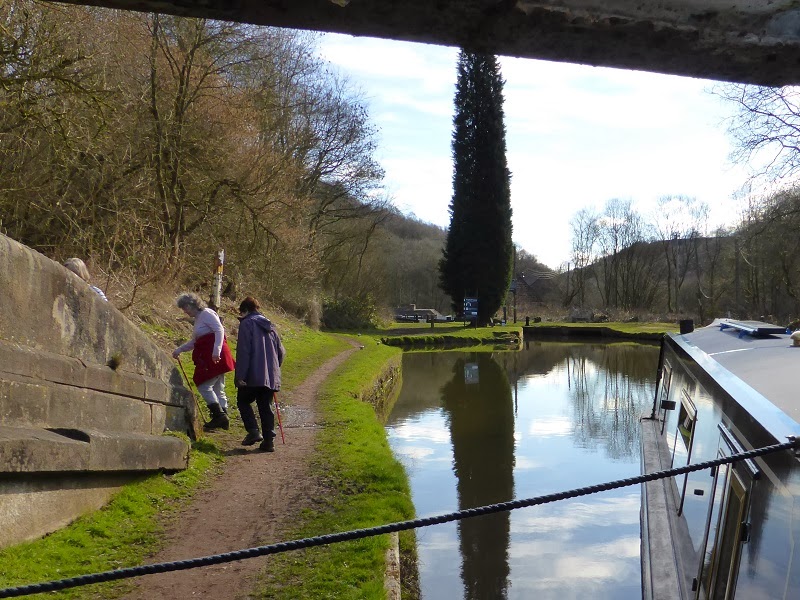 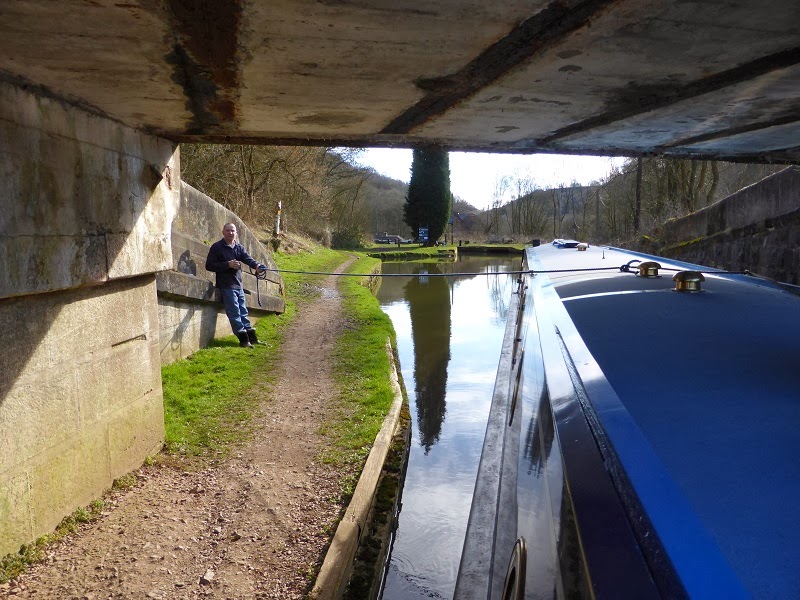 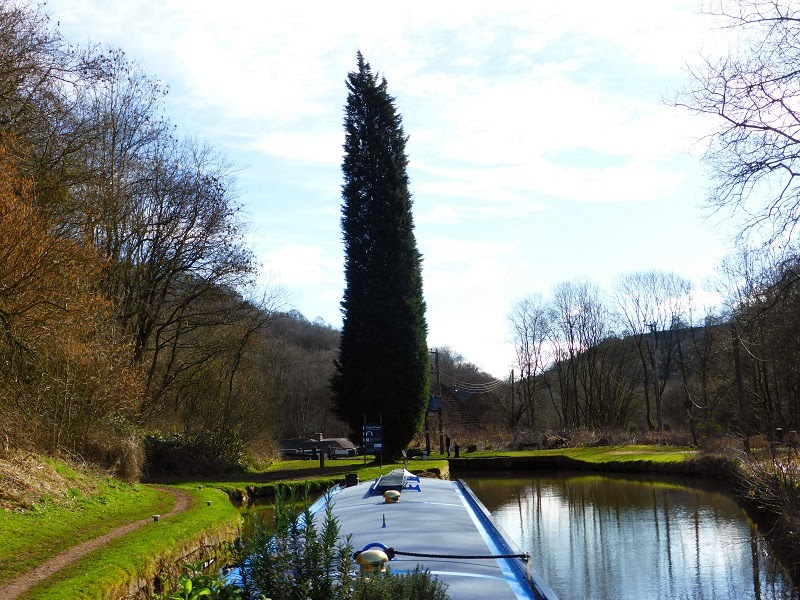 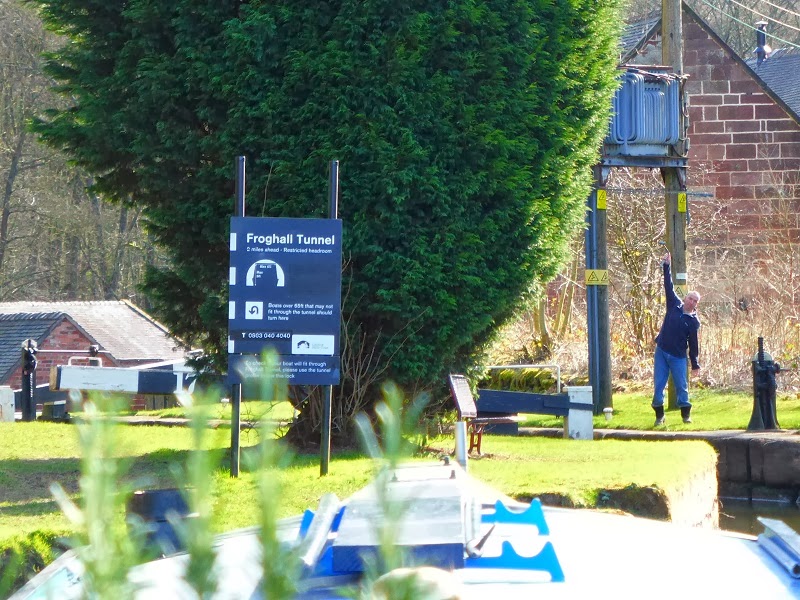 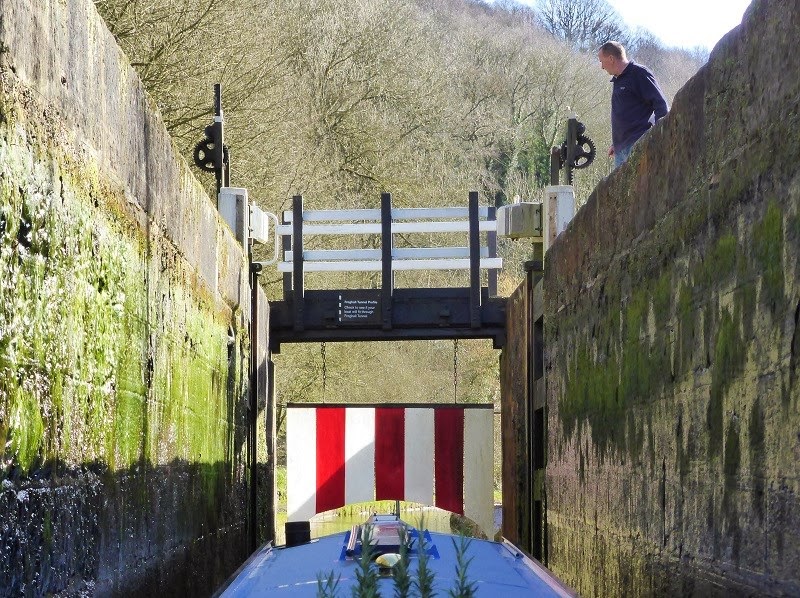 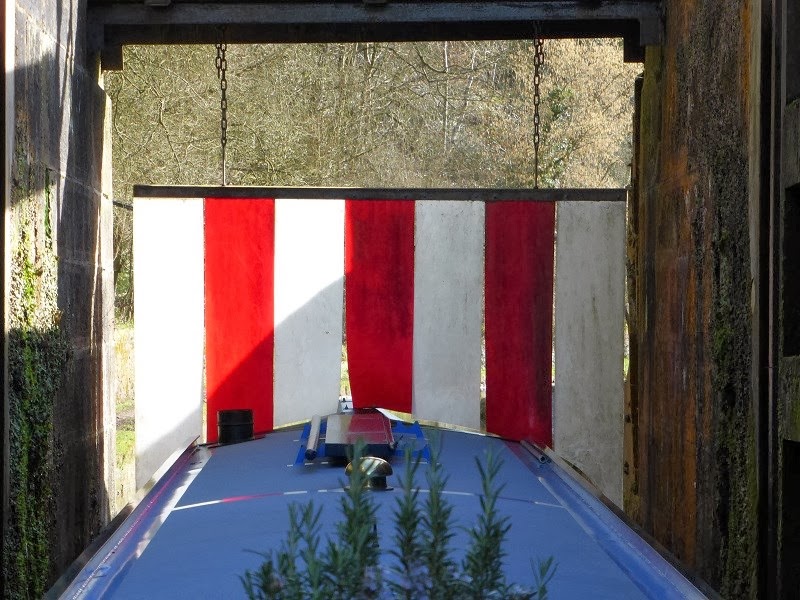 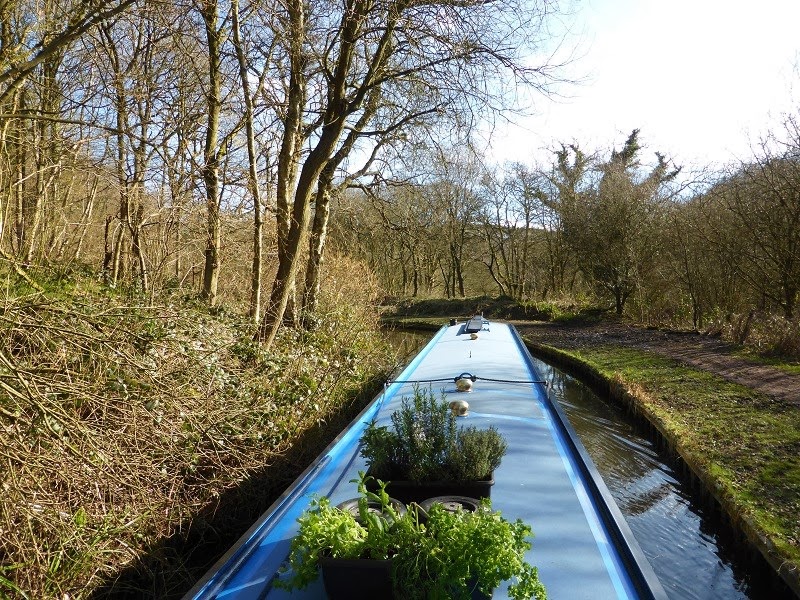 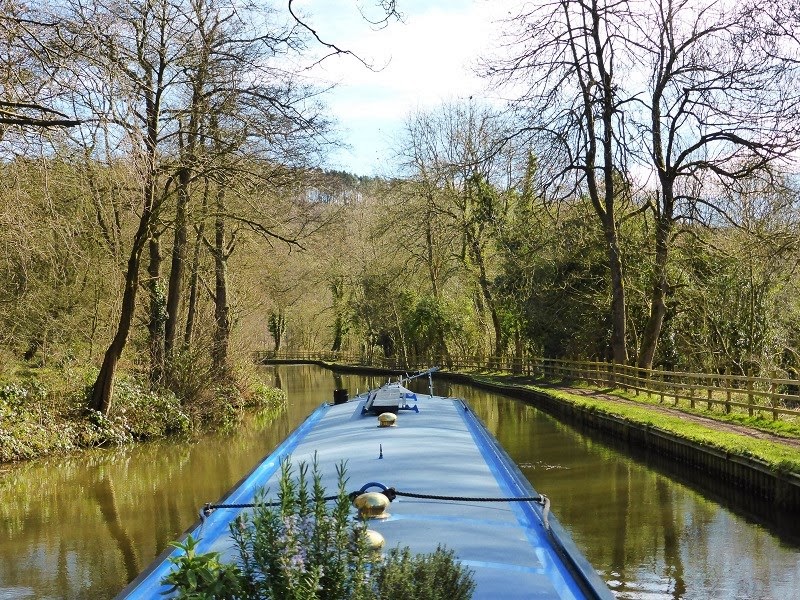 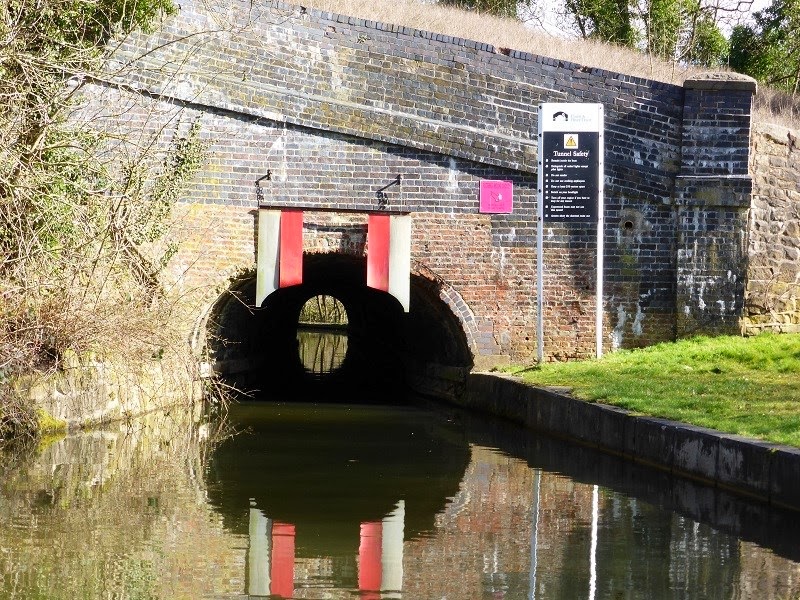 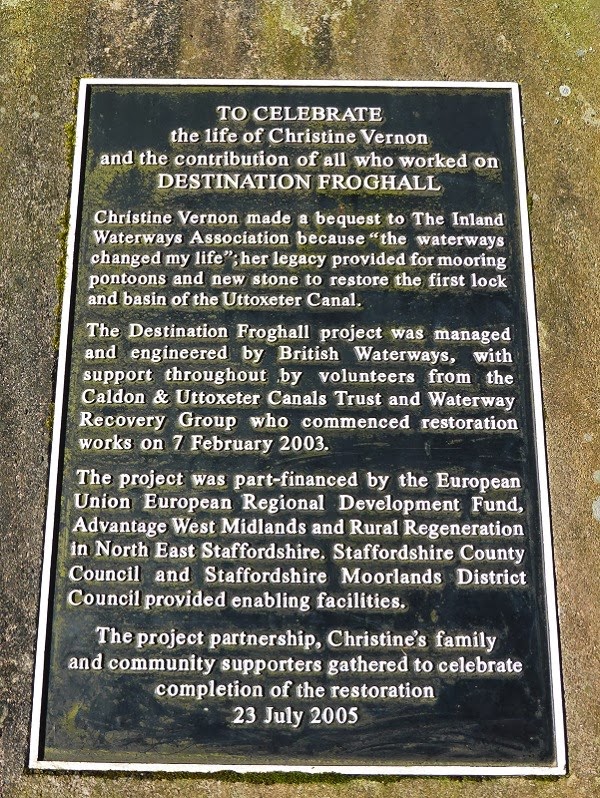 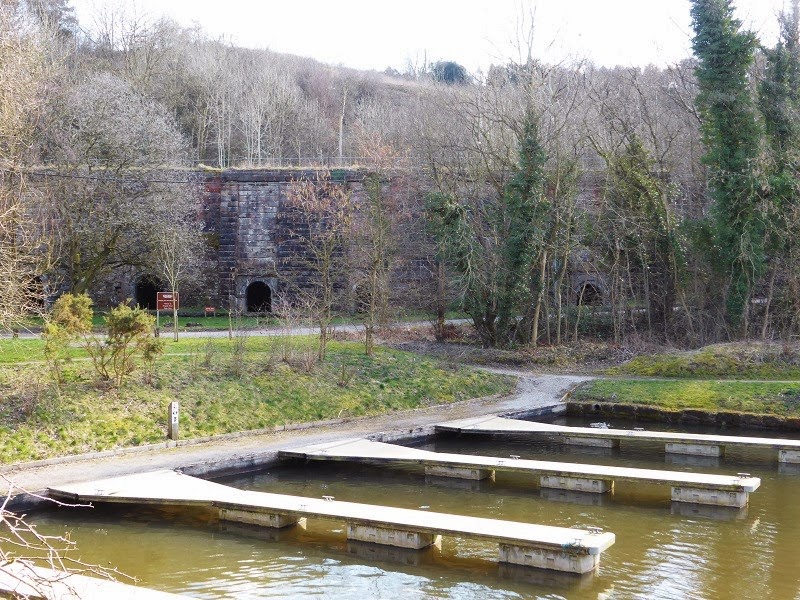 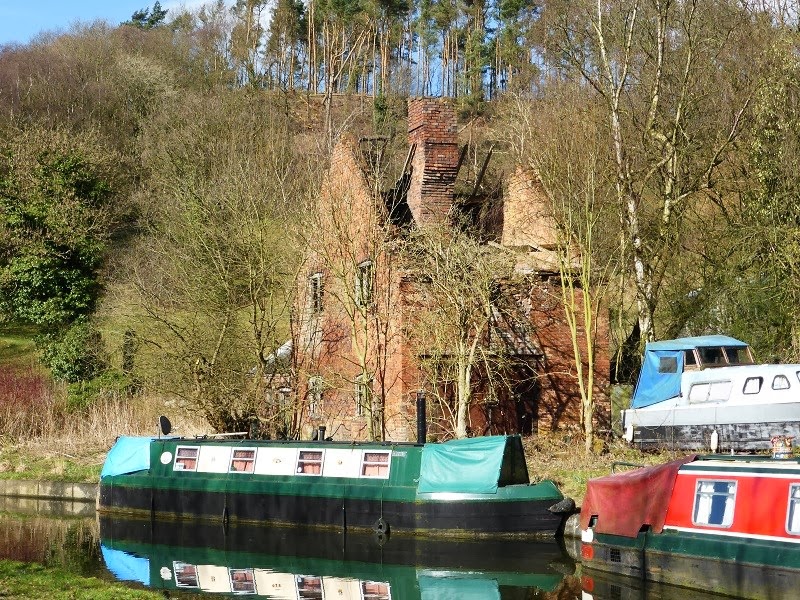 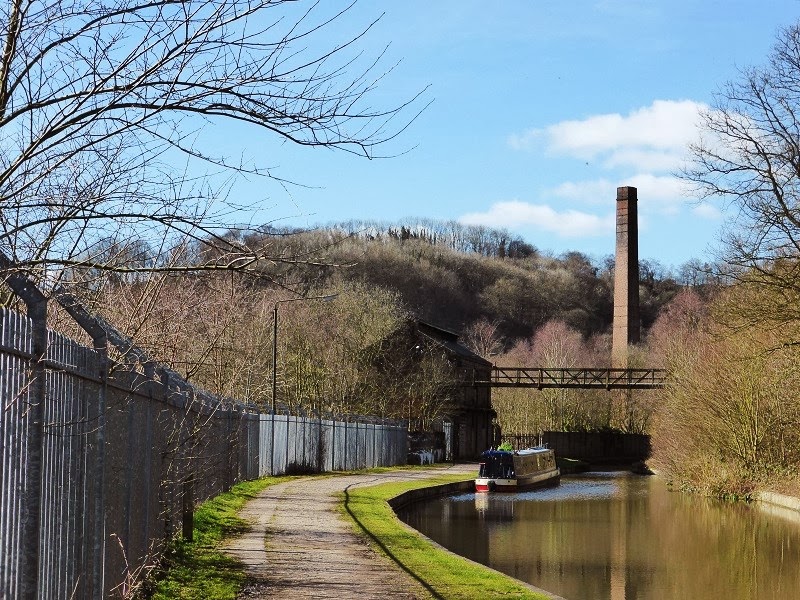 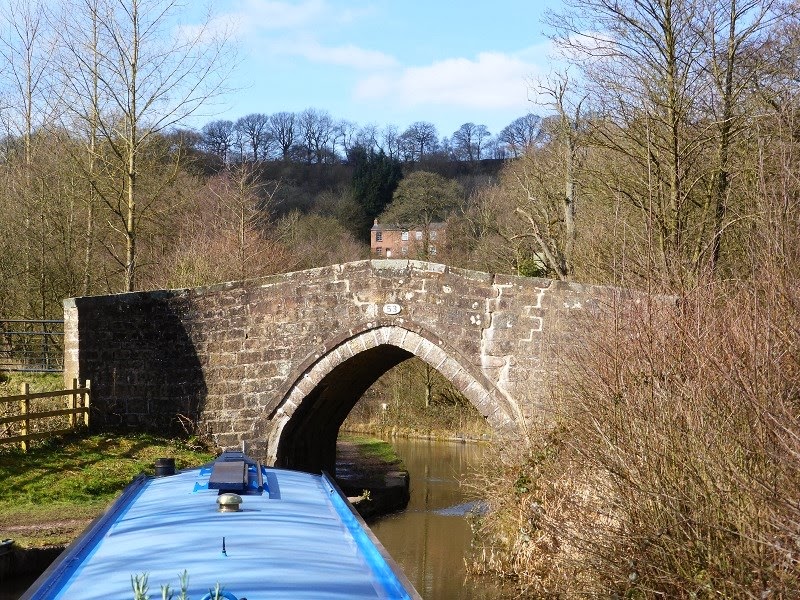 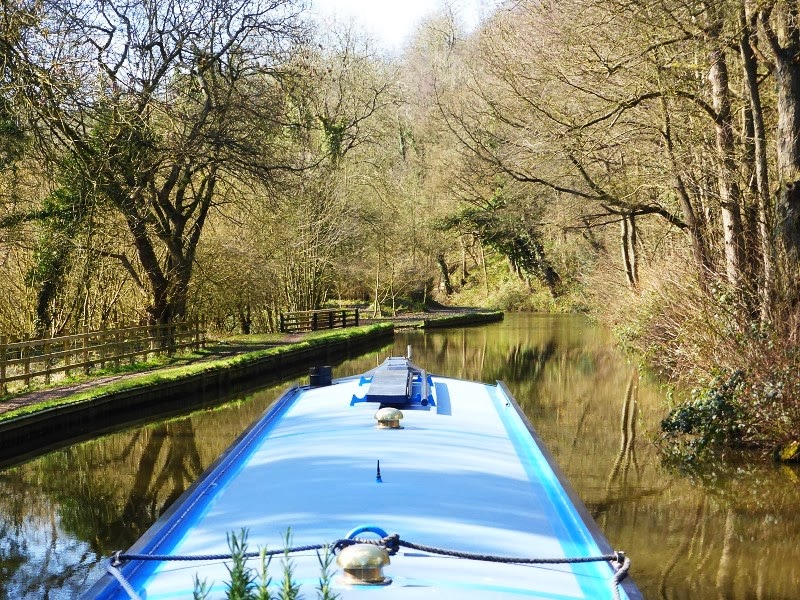 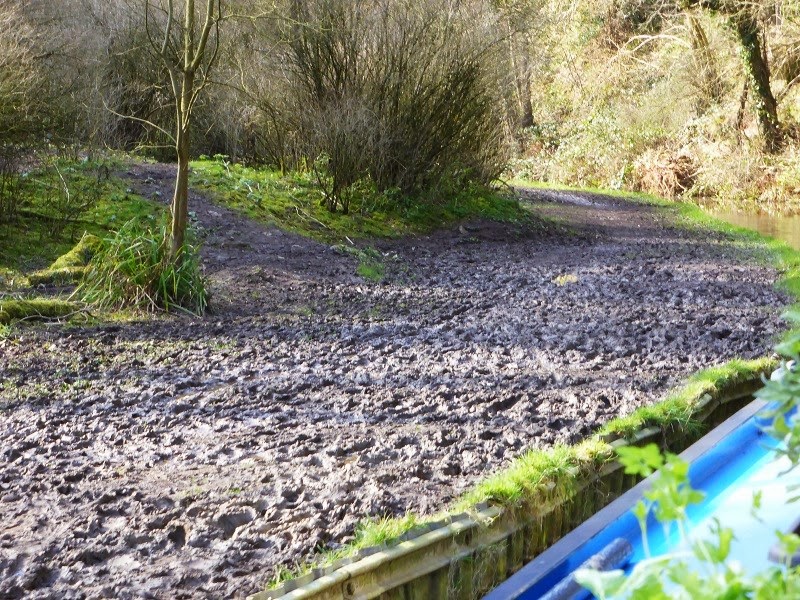 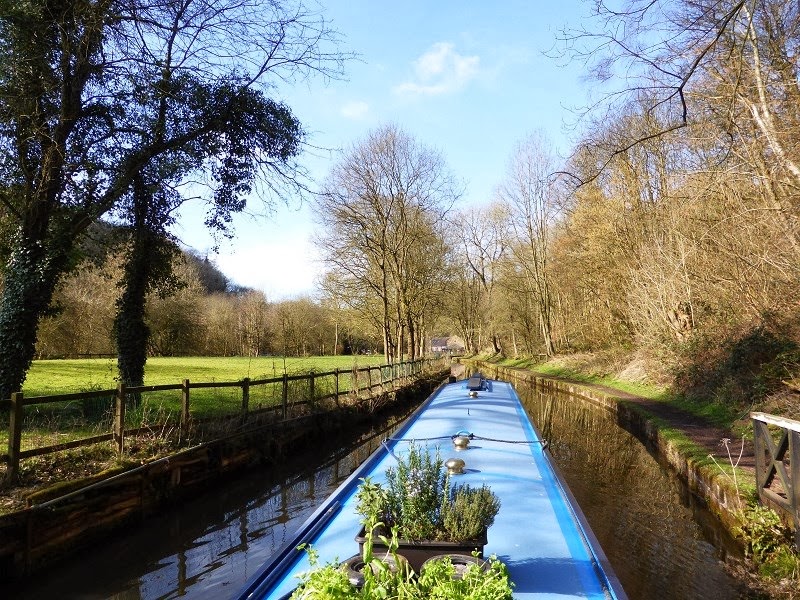 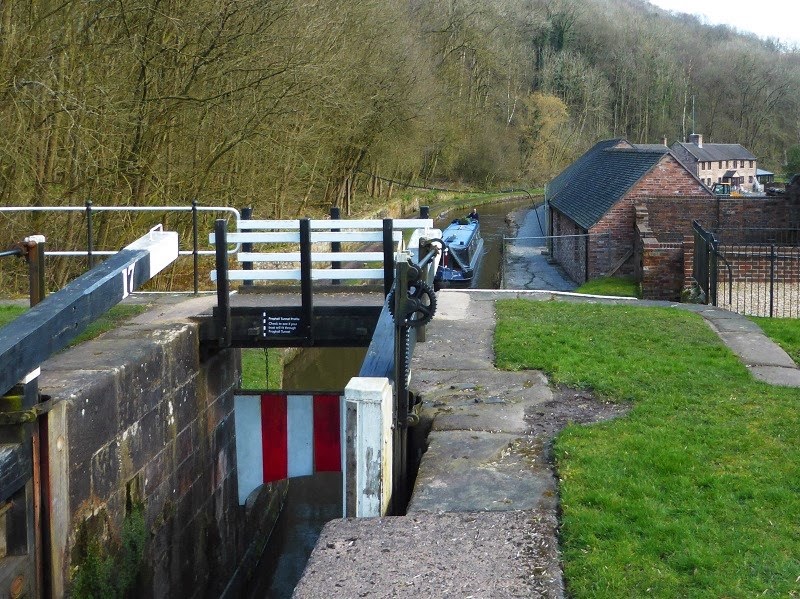 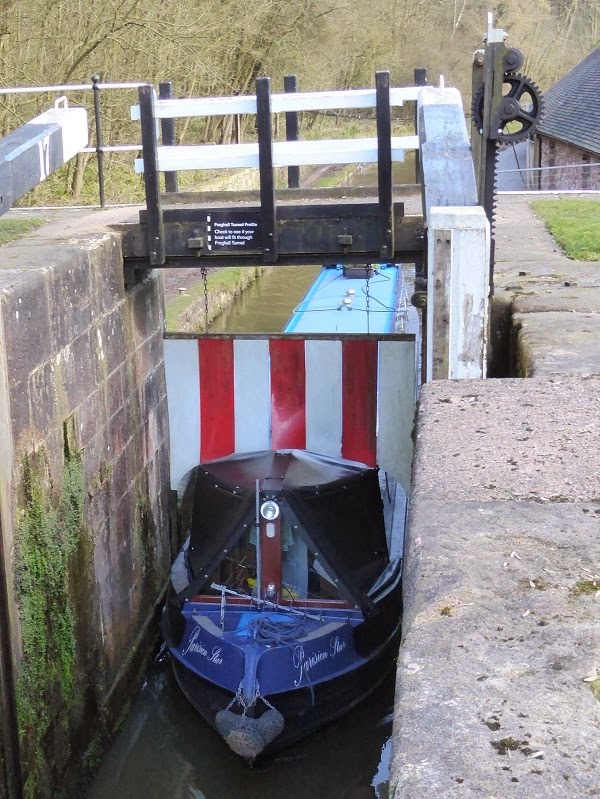 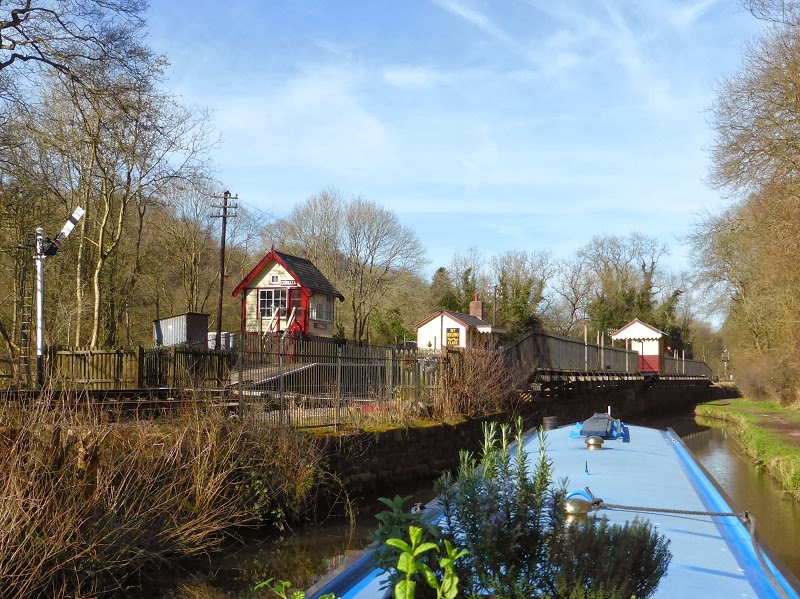 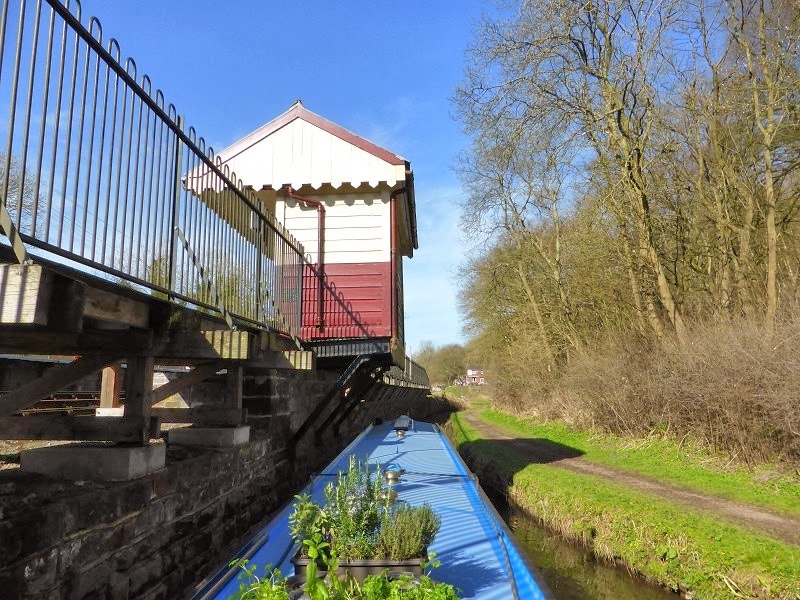 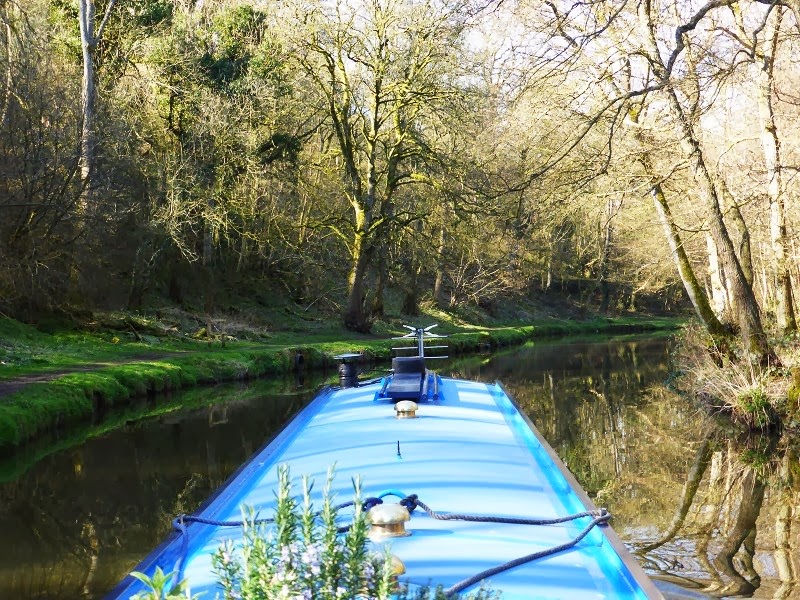 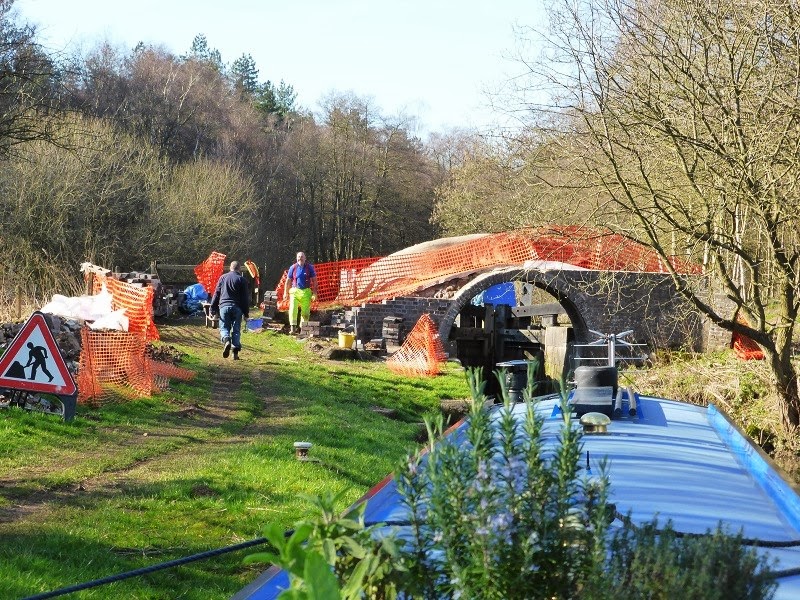 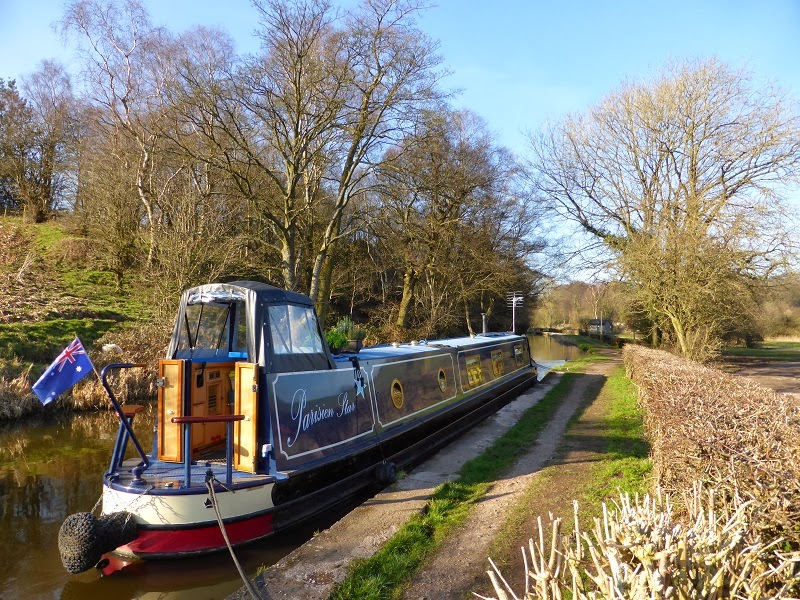