Last Friday I collected Carol (nb Winton's Folly) from the airport.  It was a chilly start to the day and I scrambled about in the car looking for a scarf before walking across to the airport building from the carpark.  I called Carol the week before to warn her that the weather was still cold only a couple of weeks into Spring.  "Bring a warm pair of shoes and long pants".  We had to laugh when we discovered she'd brought a suitcase full of Summer clothes and not a single pair of closed in shoes or long pants.  She's been shopping since then.  We've had frosty mornings all week.

I think she got a bit of a shock when she saw where we are living now.  I'm not sure what she expected when we said "an enormous shed" but it obviously was something smaller than she was looking at.  I can't recall a single time I've seen Carol speechless!  We've given her our tiny bedroom and bought a large tent to put up in the open space of the shed.  It's dusty and draughty in the shed itself so we figured the tent would resolve that.  It's been fine sleeping in there, especially as we have our own bed now.  We had to buy a smaller one for the little bedroom (once an office of the factory that operated here) where Carol's sleeping.

We have a few road trips planned for while Carol is with us so the blog will be a bit of a journey around the South East of Australia for a while.

We spent Carol's first night in Oz on a houseboat on the Murray River in Echuca.  She was called The Mayflower.  When I tried to make a booking many weeks ago this was the only weekend we could get on a boat that wasn't enormous and ridiculously expensive.  As it was we had 3 bedrooms so we asked if my brother Anthony, and his wife Leanne, wanted to come along.  They had to work the Friday and Monday so only came for the weekend.  We went up Friday afternoon and returned home Monday.

We took the boat out on Saturday and moored up a couple of hours cruise down the river.  It was a bit of fun trying to moor up such an enormous boat when we're used to a narrowboat but we got there.  The Mayflower had a telescopic "plank" that rolled out from under the boat.  It was five metres long but was just a tiny bit short for where we moored.  Mick put a large log under the end of the plank and the problem was sorted.  As soon as we stopped Carol was off the boat in a flash - shoes off and moments later she was kneeling in the sand in her knickers and t-shirt building sand castles!  We do have photos but I won't embarrass her.

Echuca is one of our favourite Victorian towns with an interesting history of paddlesteamer transport on the river.  The wharf was once hundreds of metres long until the river trade declined when the railway arrived.  Just like the canals in England it is now a holiday makers playground.  It was nice to be there early morning before it was busy with tourists.  We've stayed in Echuca many times before and decided we much preferred being right there on the river in the centre of the historic port.  Much better than a motel.  We even had a barbeque on the houseboat and a fantastic deck on the roof, complete with television.  With the sun shining we had a lovely few days.

There's The Mayflower below in the centre. 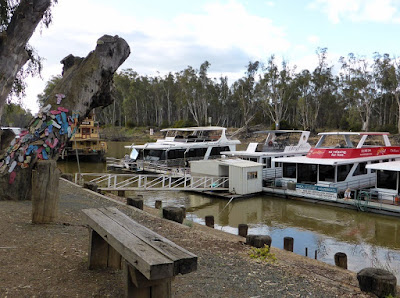 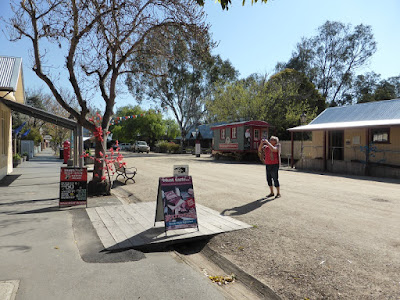 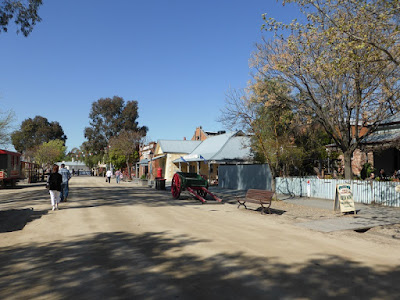 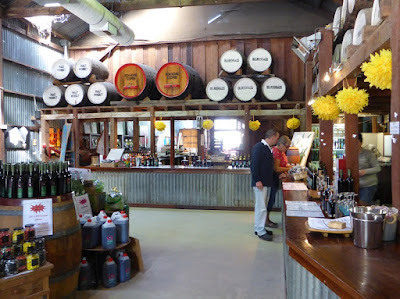 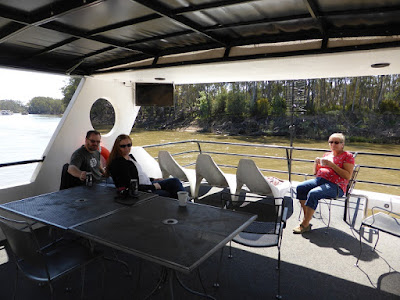 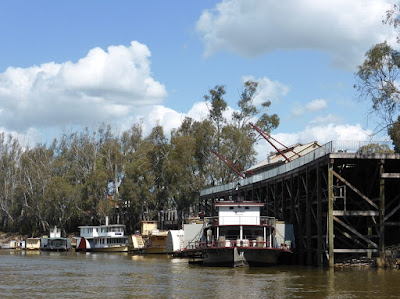 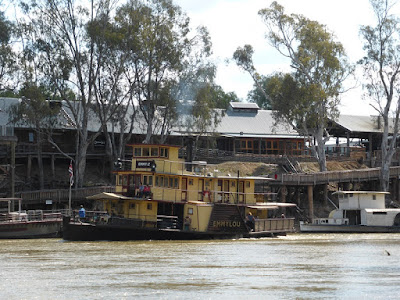 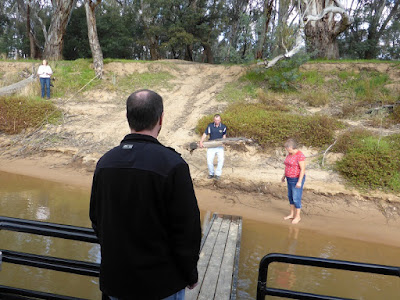 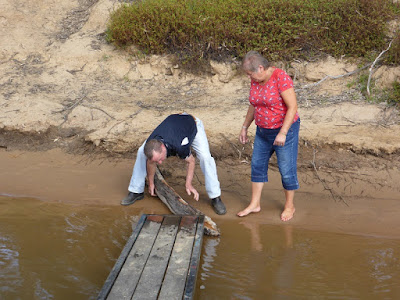 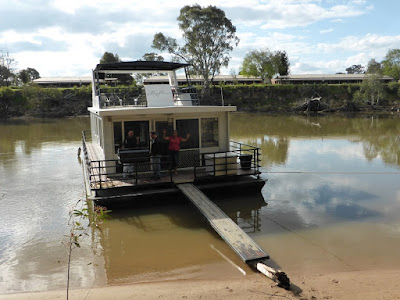 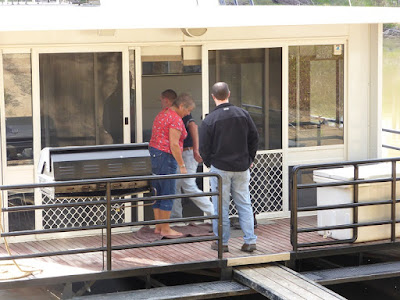 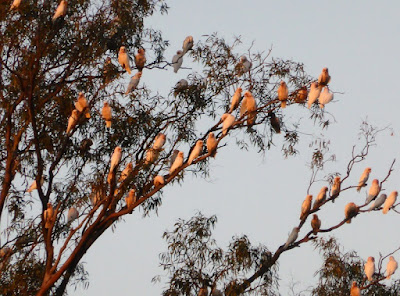 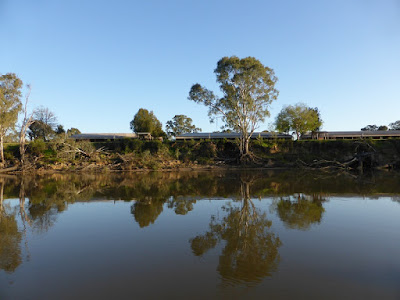 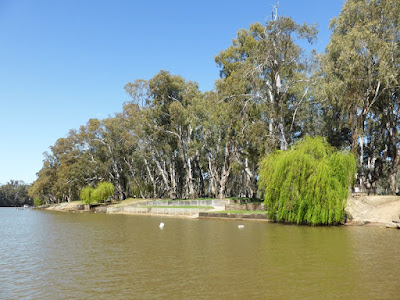 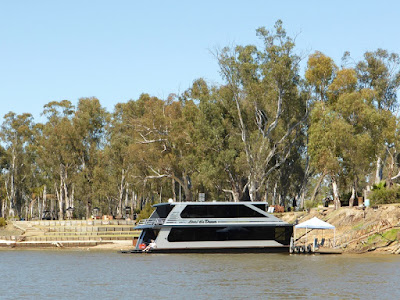 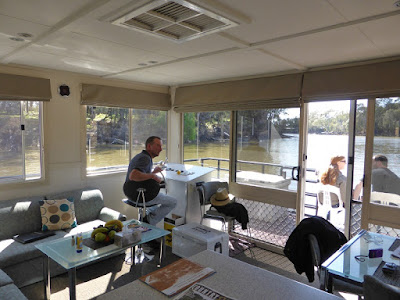 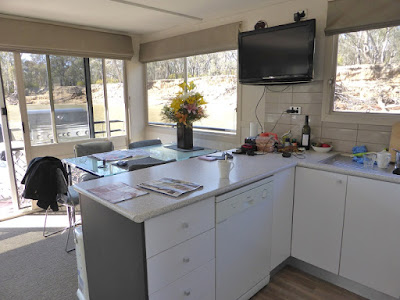 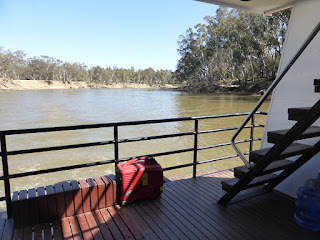 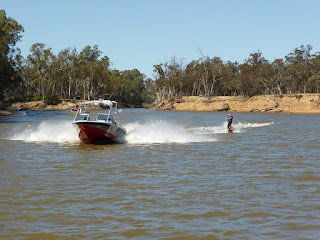 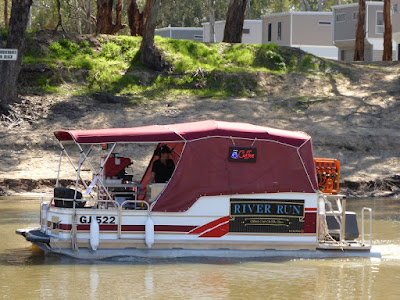 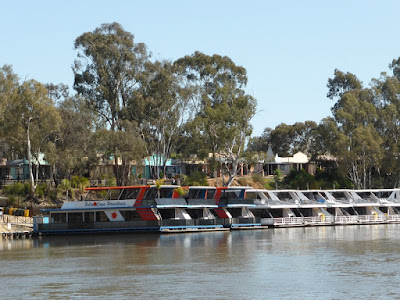 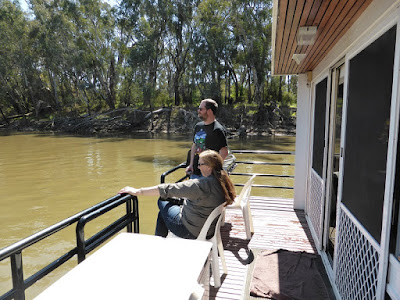 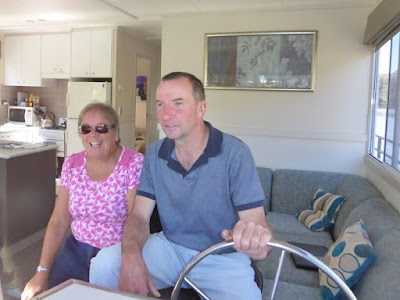 Great to see a boaty post on your blog, and Carol looks great to in her summer gear! What a boat! looks huge that's one for the bucket list!
Looking forward to future posts.

Hi Ade,
At least I have something interesting to blog about now. The house building was on a bit of a go slow for a few weeks.
In a week Carol and I are off to check out some wineries for a week.
Cheers,
Elly