We have had gorgeous weather for the last week of Winter.  Blue skies, sunshine and mild temperatures.  Today, being the last day of Winter, was positively balmy!
We went to Geelong for a drive and when we sat in a cafe for lunch half the clientele were dressed in Summer clothing.  The temperature was 21 degrees.  We visited one of our favourite places.... the Mill Market.  This was the "vintage" one and we thoroughly enjoyed trawling through the stalls.
Yesterday I went to Bunnings (like B&Q UK) and bought some seedlings for the veggie tubs.  We can't wait for it to all start growing.  Finally.... finally.... we feel like this is home.  We have chickens scratching in the yard, a couple of good veggie tubs and have good progress on puppy preparation.
The wattle is past it's peak now but some varieties are still bright yellow.  The magpie outside our back door is sitting on her nest and the crimson rosellas are everywhere.  The last 2 photos below were on a misty morning on my way to work. 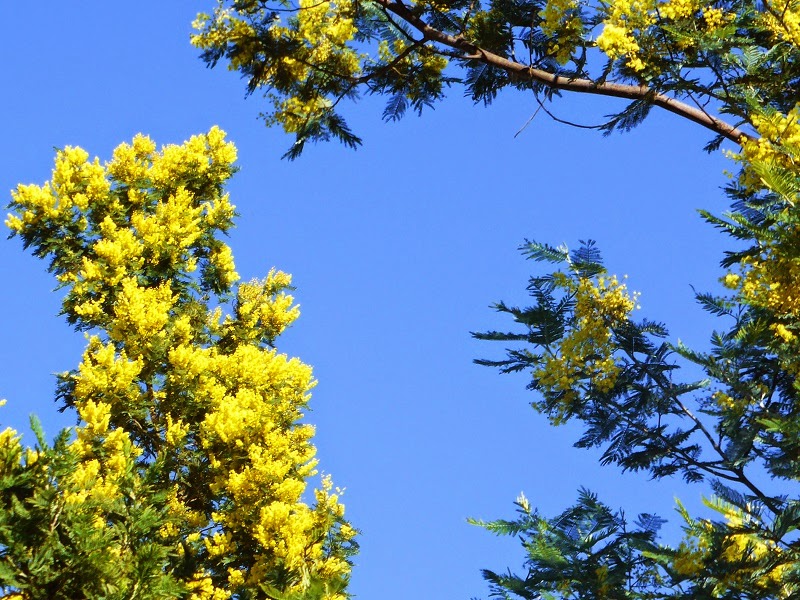 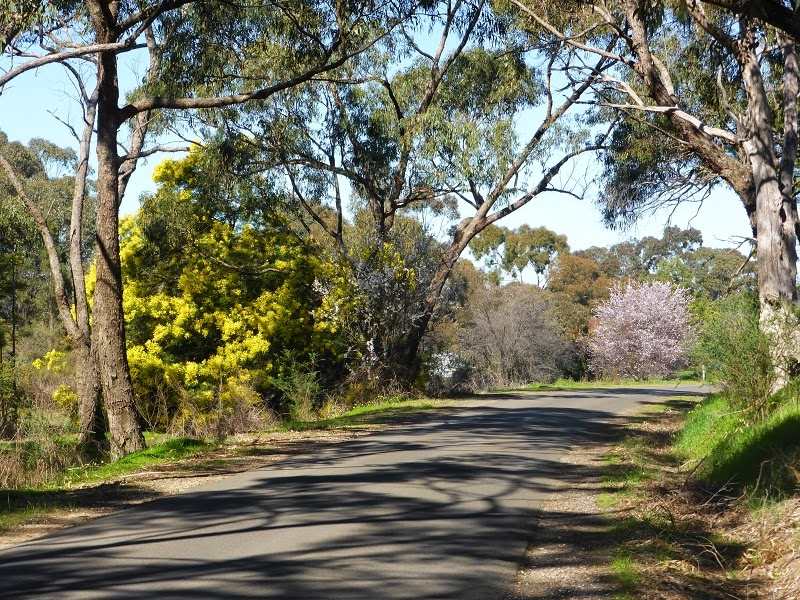 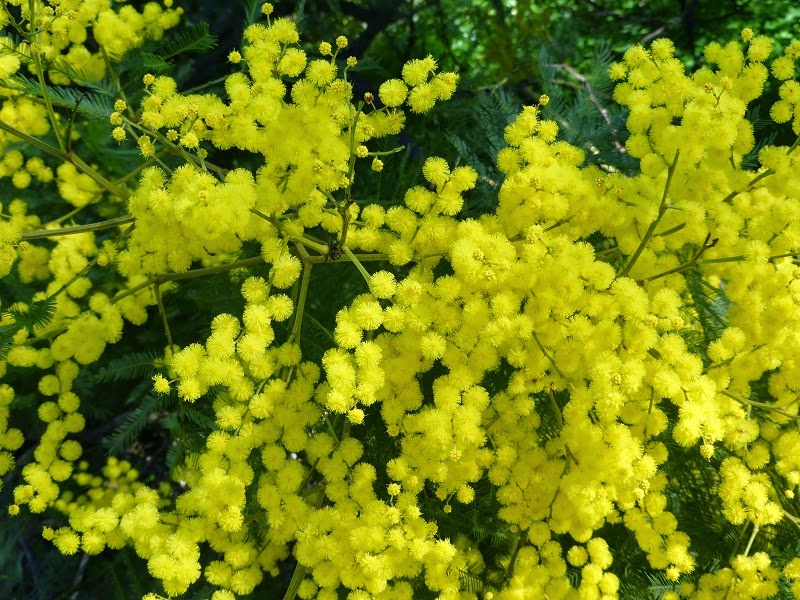 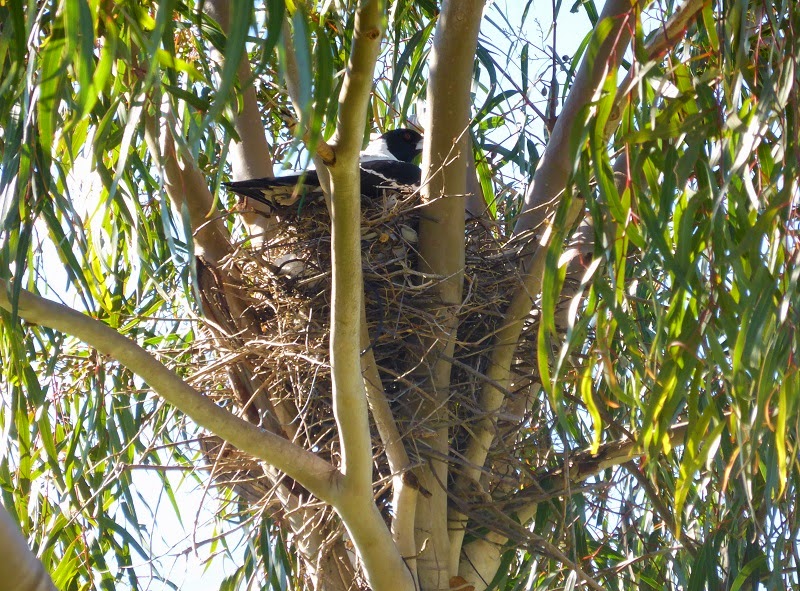 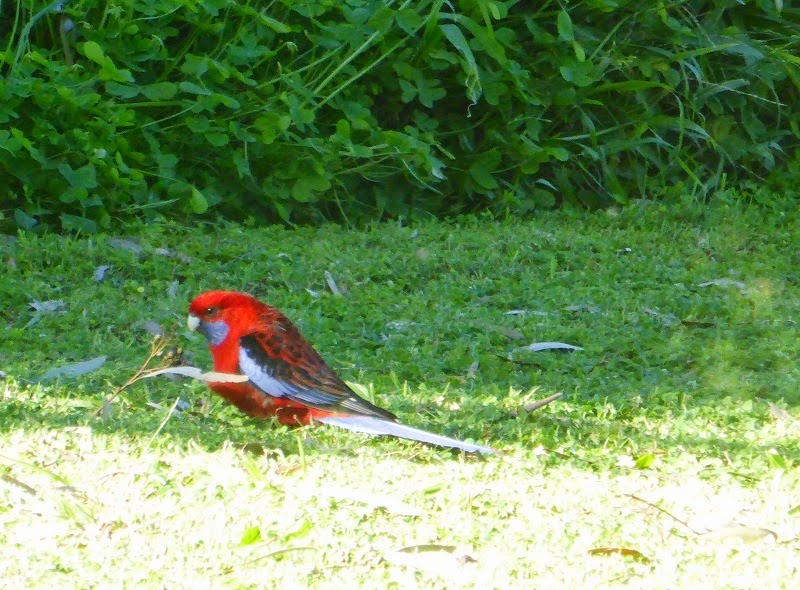 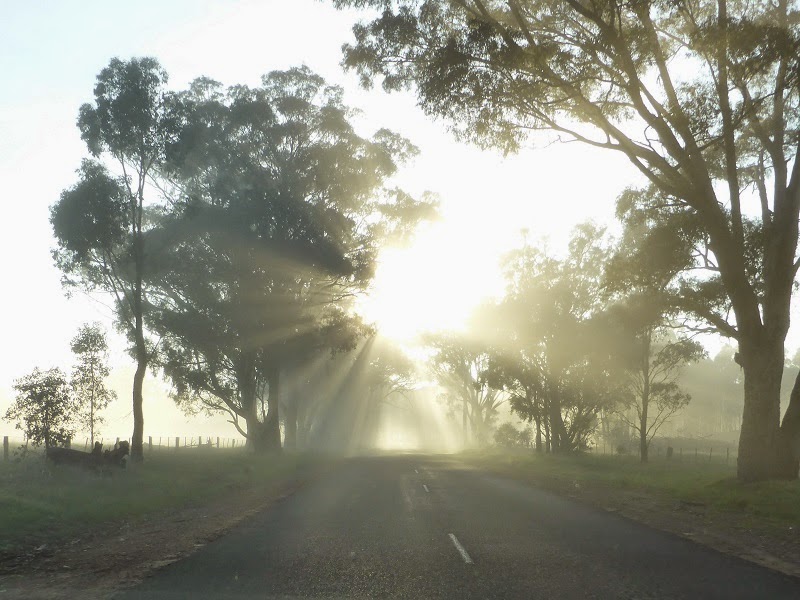 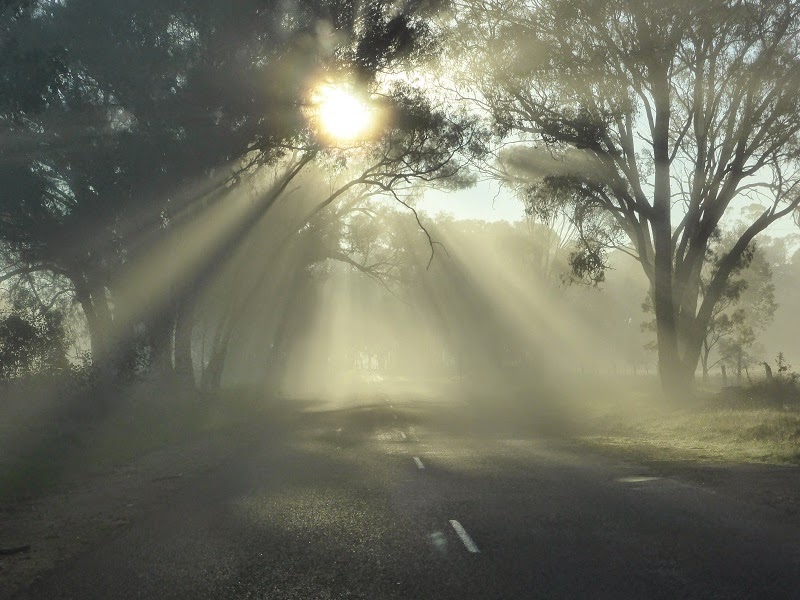 Spring is in the air

We are seeing signs of Spring everywhere we look and Winter isn't officially over yet!  We have had days that have been mild enough for tshirts in the sun.  I just hope it isn't a sign of a hot Summer coming.  That wouldn't be nice at all.
Mick has been happily working on the carport.  No, his new posts aren't crooked in the photo below.  The fence and the old shed are crooked.  He also put me up some shelving in the pantry.  It looks great and I'm pleased to have it sorted out in there now.
With Spring just around the corner we have also made a start on somewhere to grow veggies.  A couple of sections cut from an old water tank made a good place to start.   We have a second chook laying now too.  She had a bit of a shaky start and we thought she was egg-bound with her first egg but she eventually came good and is quickly a regular in the nest box.

And..... we are on the lookout for a Labrador puppy.  There are a few litters due in the next month so we are hoping one might bring us a new family member. 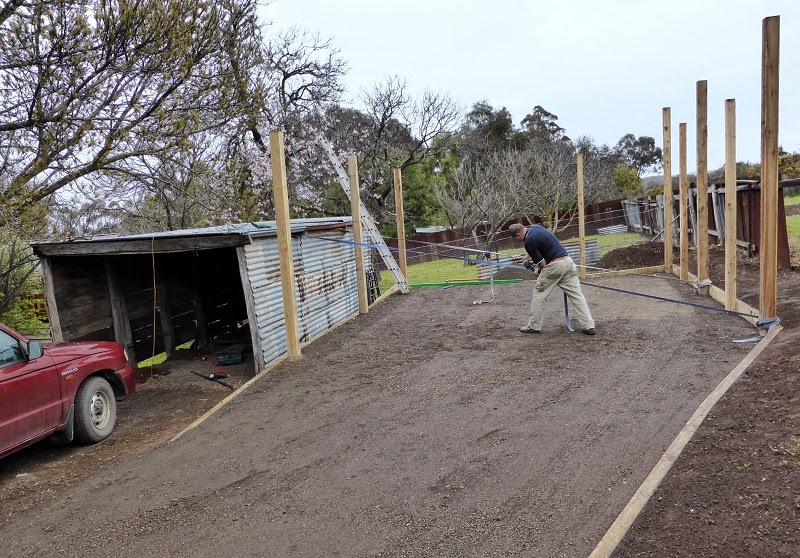 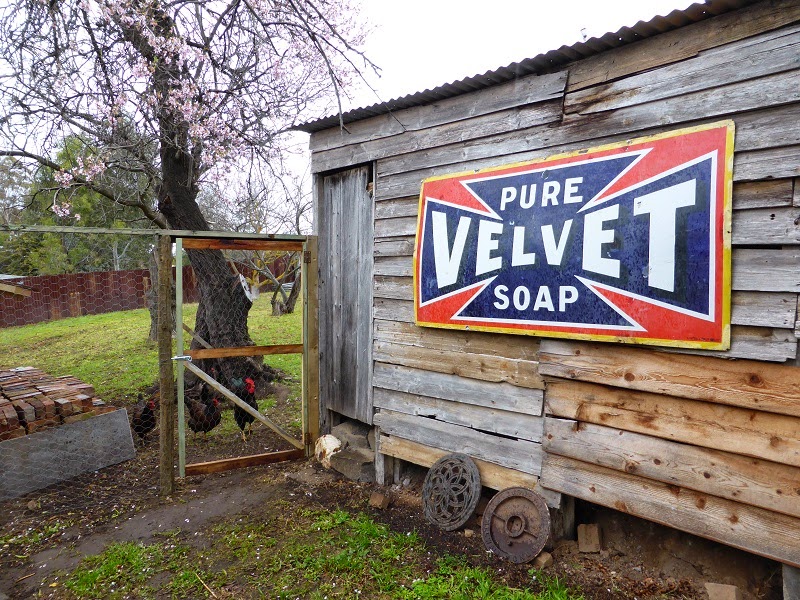 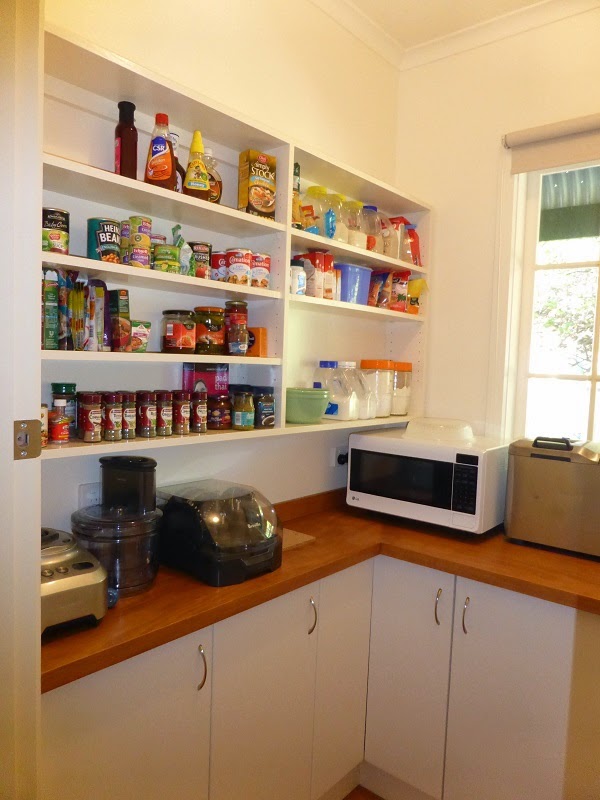 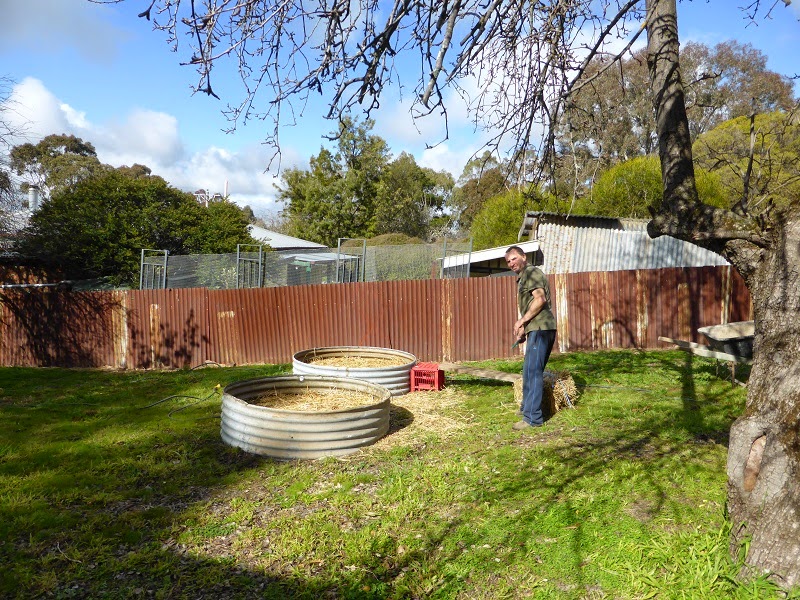 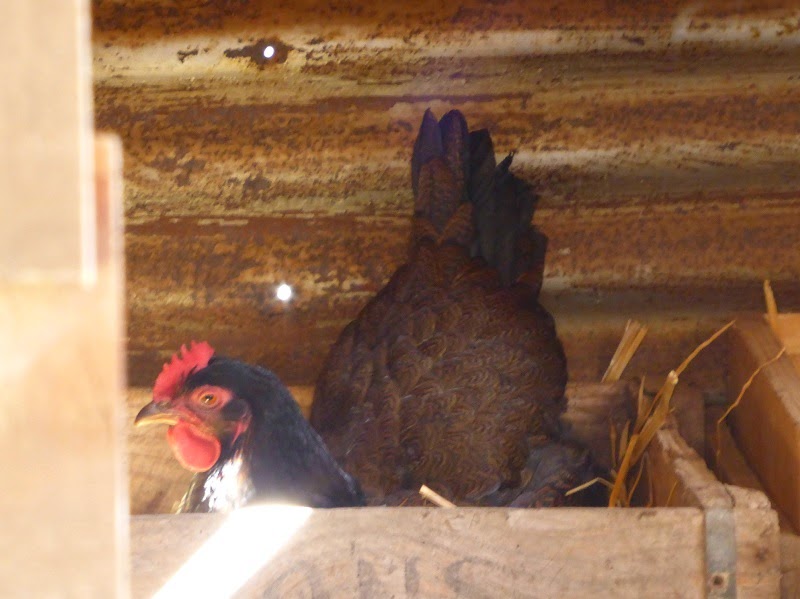 There's not so much to blog about with life settling into a routine.  We are at the tail end of Winter and the first signs of Spring are appearing.  Our almond tree has blossom on it, the wattle is incredible this year and there are bulbs flowering.  It's got us thinking about getting a vegetable plot going.

Mick's been busy doing what he loves best.  He's never happier than when he has a project on the go out in the yard.  He has sorted out the garden shed, been making up some shelves for our pantry and then made a start on a carport.  The very rustic old garage is on such a lean and it's been depositing huge dusty splats all over my new car.  Mick's truck is out in the weather and although that's tolerable in Winter, I don't think he's looking forward to a sizzling steering wheel in Summer.

The days are getting slightly longer and when we saw our favourite lamb cutlets on special at Woolworths we decided to have our first barbeque.  I got home from work just before 6pm Friday night and Mick was already out there heating and cleaning the barbeque.  He made our barbeque from an old enamel cooker.  The oven is a good place to store the gas bottle.  The smell of a cooking barbeque is like nothing else..... Aussie through and through.

Yesterday we had a solar consultant out to give us, and a couple of our neighbours, quotes on having a solar system installed.  In the afternoon I went walking with Tracey, our neighbour, and way off down a dirt road we chatted with a lady who had an ex breeding labrador from Righteous Pups.  We stopped to chat and pat the dog and another kilometre or so further down the road we turned to walk back home.  We saw her chatting to the lady across the road from her and a while after we walked on we found the dog had followed us.  We turned back and when we got near their property the dog spotted their dam and ran off for a swim.  We quickly walked off again in the direction of home while she was distracted.  More than halfway home the dog found us.... again... panting from running to catch up and dripping wet from her swim.  Now we had a dilemma.  She had no road sense at all and twice we had slowed down an approaching car to avoid her being hit.  I rang Mick and he came to try and get her in his truck to take her home again but she wasn't going to be caught.  There was no choice in the matter but to turn back all over again.  This time as we neared where she lived a neighbour was standing out on the road and saw her coming.  He apologised profusely when we told him this was the second time we'd brought her home, although I don't know why it was his problem as we'd not seen the owner since our initial chat.  Not a terribly responsible dog owner to not even come looking for her.  The dog happily trotted off after him as he took her back to her home.  Our walk turned out to be twice as far as we first intended and I won't be patting that particular labrador again unless she's on a leash! 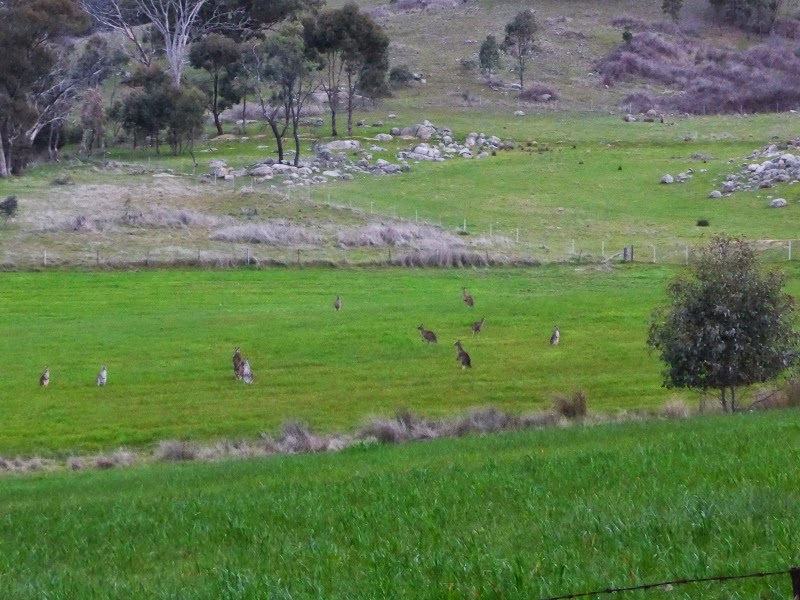 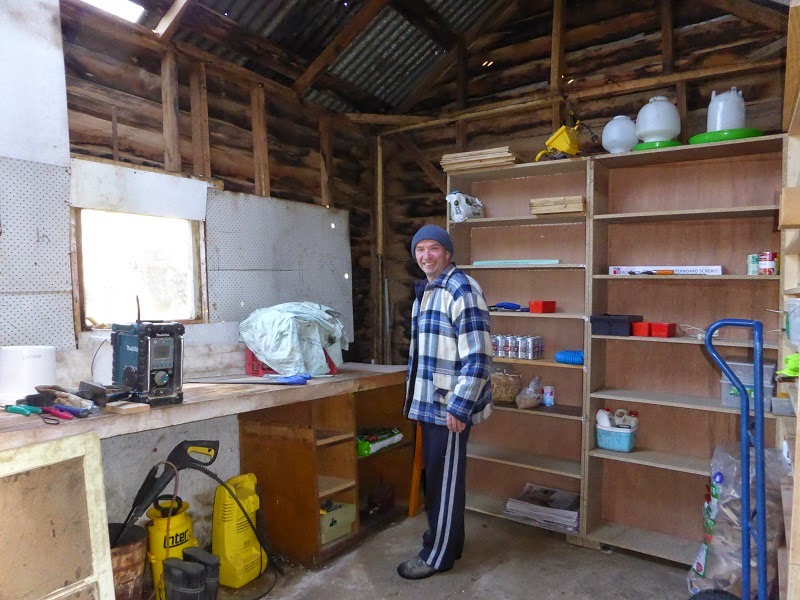 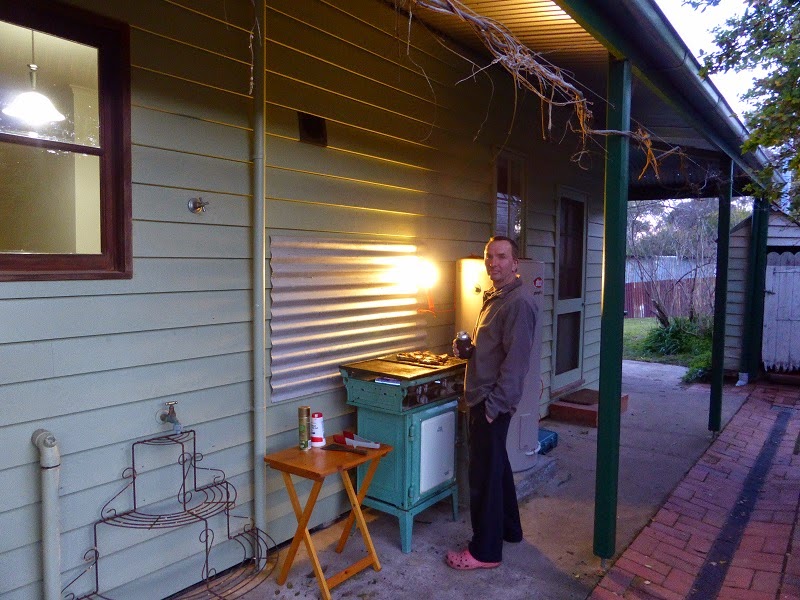 Yes, we had snow!  Not at home but at the office while I was at work. There was a few particularly mild days and then a sharp turn.  The Southern areas, especially Tasmania and the South of Victoria had violent winds causing terrible damage.  With it came freezing temperatures.  Last Friday only reached 5 degrees where I work and on the way I could see the rain turning to sleet.  By the afternoon it was snowing in bursts.  It melted on impact among the rain sodden streets but higher areas of the state had everything covered in a sprinkling of snow.  The news on TV showed scenes more familiar to us on England than here at home.  It was a bitterly cold night with forecasts predicting -2 degrees.  It felt like it!
This week we have woken to crisp blue skies and a good frost.  This is just the sort of Winter day I love.  Mick can't wait to get outside and we decided last weekend we would let the chickens free range for the first time since we got them.  It didn't take much prompting as they had a large area at the place we got them from.  Wilbur immediately starting calling his girls to show them some morsel he had scratched up.  The girls have been given names now.   One of them has blue leg bands (Betty), one has red leg bands (Rosalie) and the third doesn't have leg bands so she is "plain legged" and called Prunella. Our boating readers will likely know where we got that name.  After our first egg last week it took almost a week for another to arrive.  One of the girls has much more red in her comb so I'm guessing she is the layer.
At last we feel like we have a routine and have settled down a bit.  I enjoy living in this house.  Mick has made some improvements on the little garden shed so we have plenty of shelving now for storing tools, garden equipment and chicken stuff.
It's lovely to be baking our own bread again and to be able to pick up a bulk bargain and have somewhere to store it.  My mum and her partner bought a huge box of rather ripe bananas for $5 and I came home that day with 27 bananas!  I used to bake banana cake a lot when we bought our first house and were on a very tight budget.  Mick ate like a horse when he was younger and would go through 2 banana cakes each week for his morning tea, although I later discovered they were being shared with his workmate.  My recipe came from my high school cookbook which mum had in her cupboard.  So now it has been resurrected.  I've made 3 banana cakes in the last month and there is bananas chopped and frozen into parcels for one cake each in the freezer.  I've passed on bananas to friends and neighbours too.
We really enjoy chatting with our UK friends on FaceTime and Skype.  We had a great chat with Andy and Jean on nb Josephine tonight, even saying hello to Missy the cat.  We miss you guys and it was so nice to see your smiling faces.
Posted by Elly and Mick at 10:25 No comments: