We have had some very warm days this Spring.  That doesn't bode well for the Summer to come.  There has been some local controlled burning just to prepare us for the smell of fire.  It's always alarming to look out and see the air thick with smoke, even when you know there is going to be a controlled burn.

The roses in our garden are fantastic at the moment.  Some of them have been there for a very long time and are well established.  It's amazing to think they flower like this with so little water.   We spent last Sunday morning out in the garden - Mick weeding around the roses and I nipped off all the dead flowers and also picked a selection for a vase in the kitchen.  They smell so lovely.  Klara ran around like a lunatic, getting in the way and making a general nuisance of herself.

We have had to put wire around our two veggie tubs to protect them from assualt.  A new game developed which involved leaping onto the lettuces!  Next came the trunk of the wisteria at our back door.  It was in danger of being ring barked.  Another wire ring to protect it.  Last this weekend was the the geraniums that were growing beneath the orange tree.  Klara broke so many branches off it that we gave up and moved them to inside the chickens area.

After lunch on Sunday we decided to take Klara to a nearby swimming hole for her first paddle.  It was a warm day but overcast for most of it.  We don't get overcast conditions very often and I think it kept a lot of people from doing the usual things they would on a warm day.  There was nobody there.  Her first encounter with the water involved her jumping in and getting her face wet.  She leaped straight out in alarm and did the rolling in the grass thing.  We walked along the edge for a bit and she paddled on and off.  She didn't seem interested in going too far out and only got wet to her underside but it was a good first effort.  In between each dip in the water she rolled around madly.

On the way home we made a stop at the weir to have another walk and see how many people were there.  It was a bit more popular with a few folk out swimming with their dogs or sitting out reading.  It was nothing to what it's like on a sunny day and packed with people.  I much prefer days like this without the intense heat and beating sun.

It was a big outing for a little puppy and when we got home Klara went to sleep straight away.  She had been good as gold in the car.  Actually, it was in Mick's truck which has an "extended cab" with a pair of little fold down seats suitable for children or, at a push, an adult for a short journey.  Mick's built a long open box that slides into the space and he carries tools in it.  He took the tools out so Klara could sit there.  She loved it! 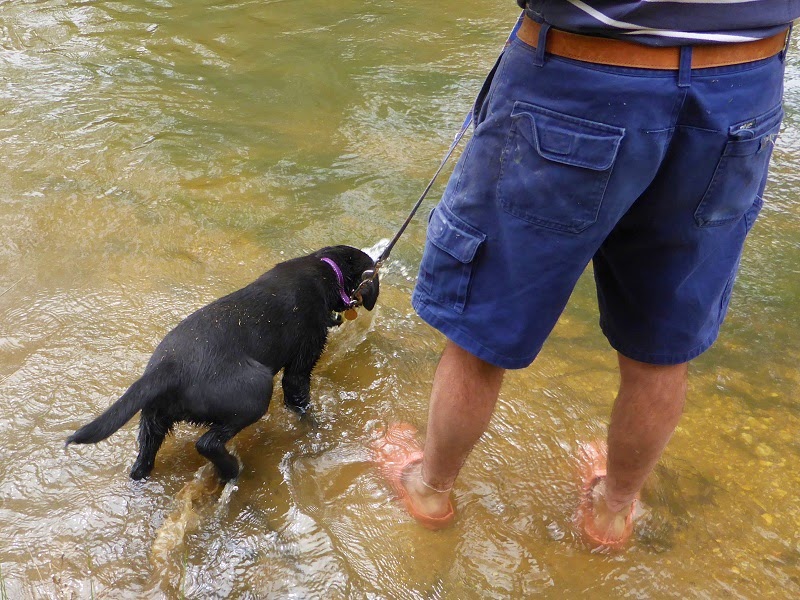 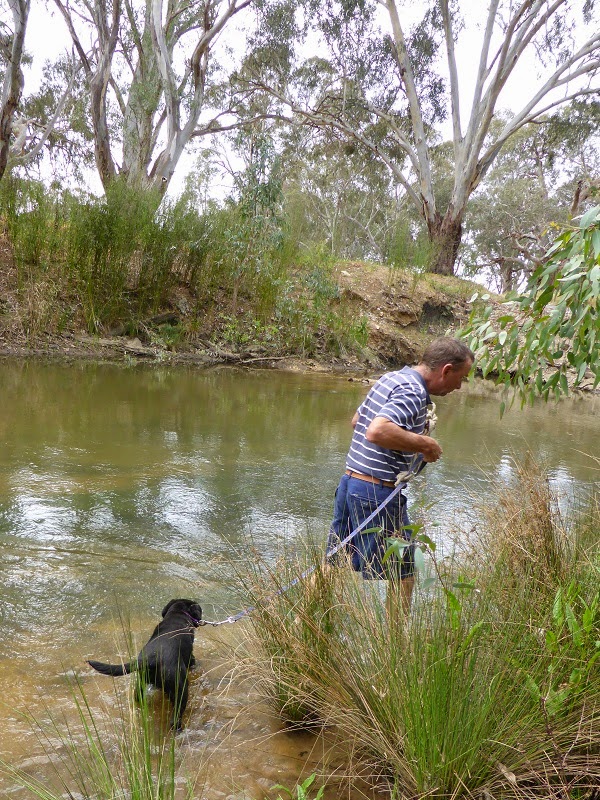 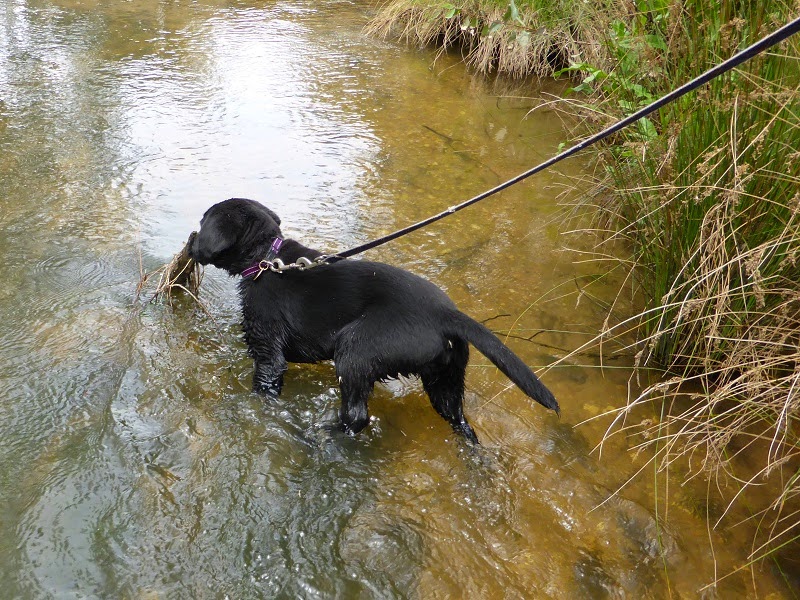 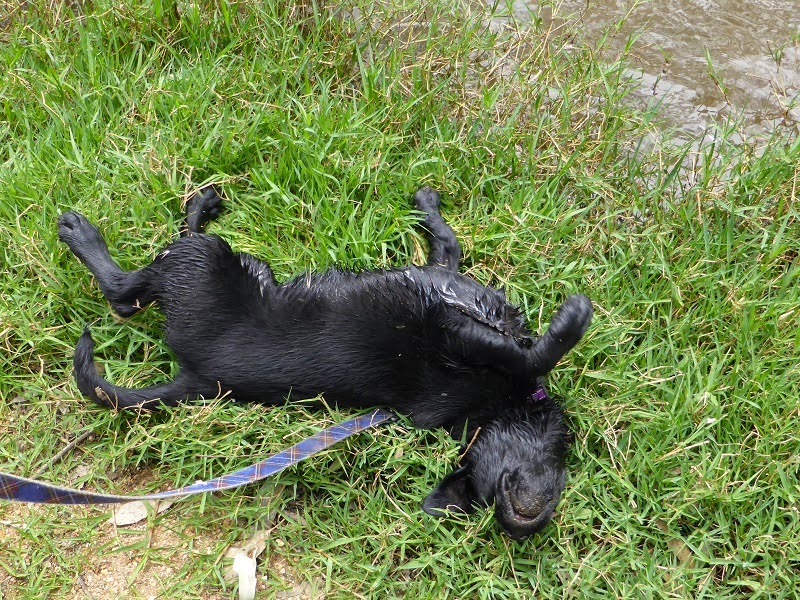 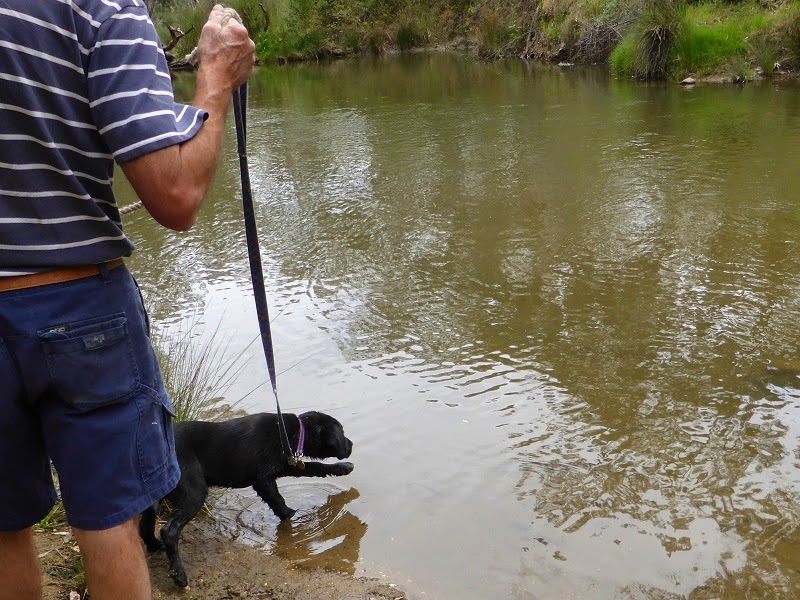 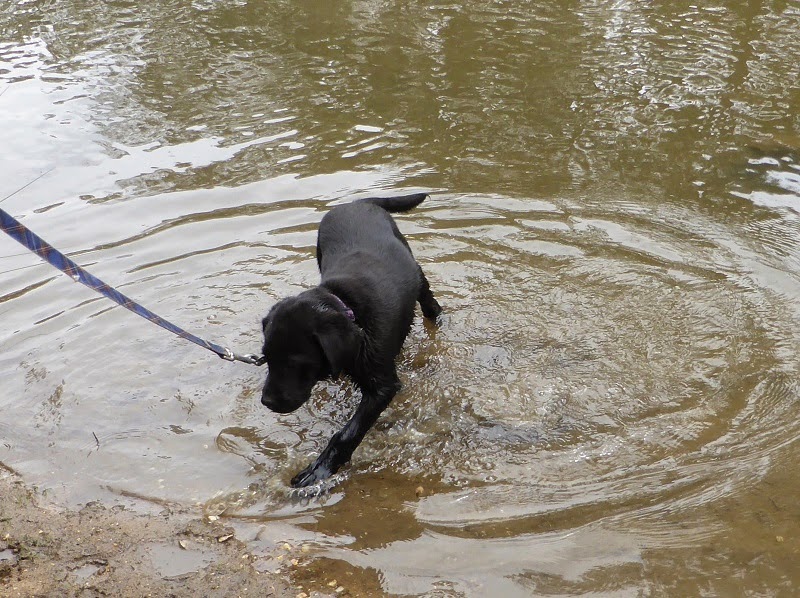 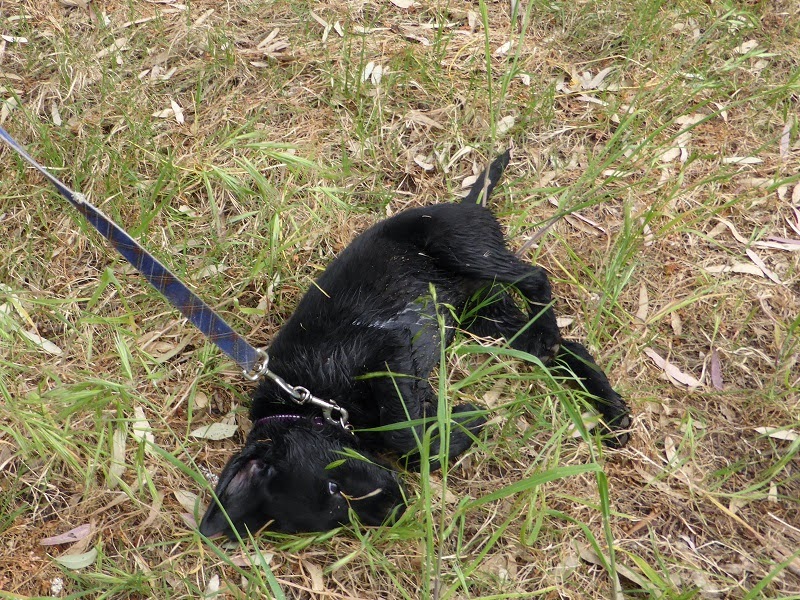 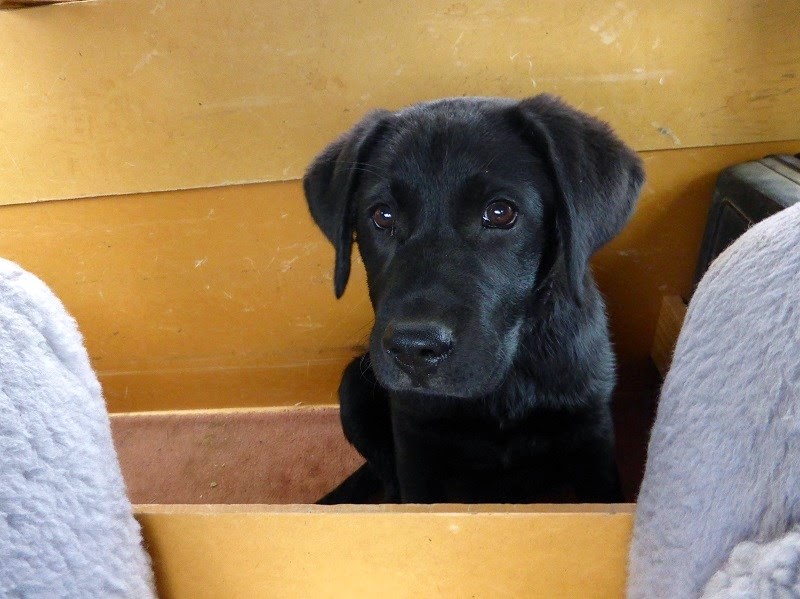 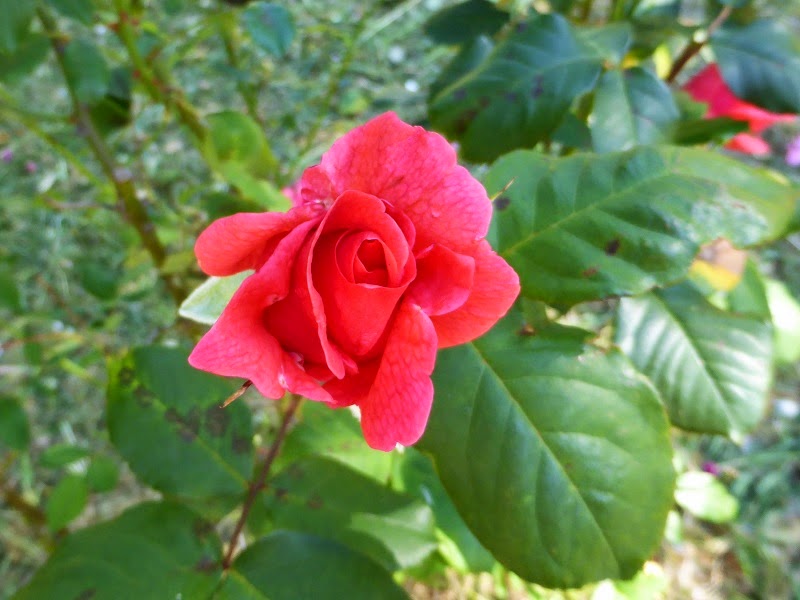 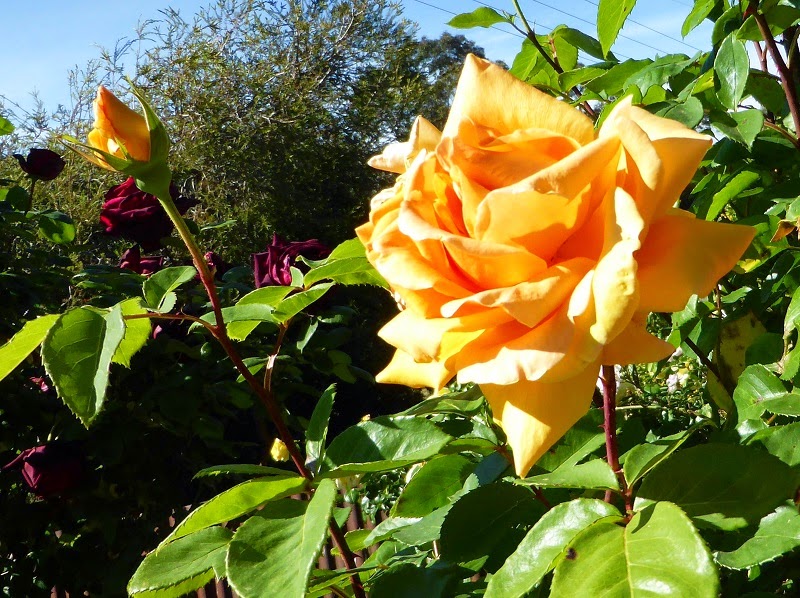 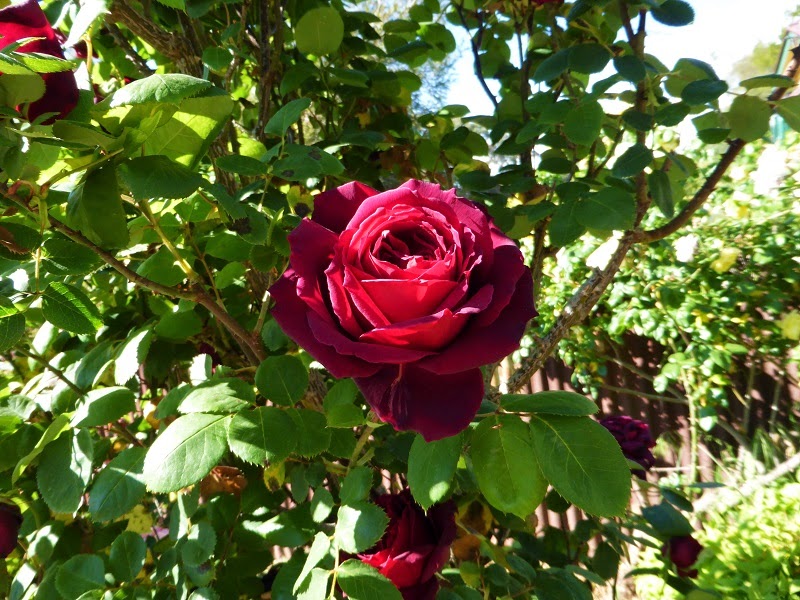 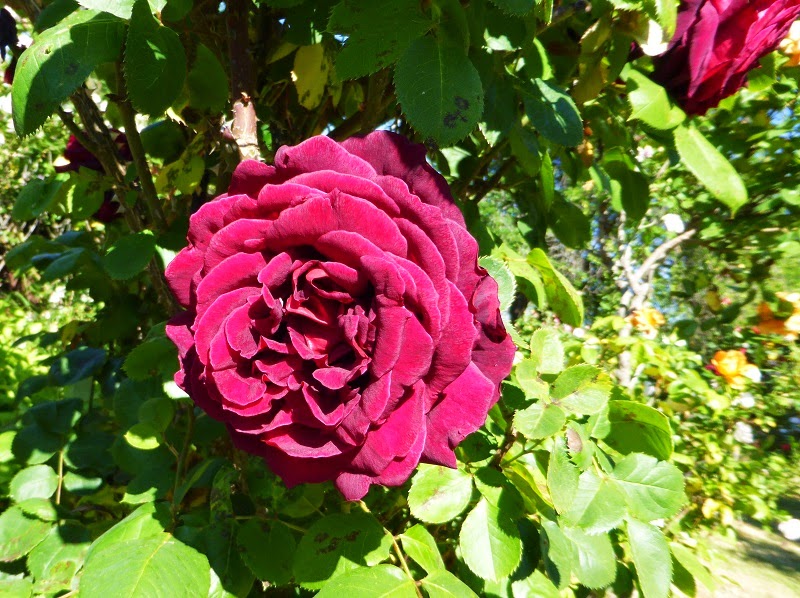 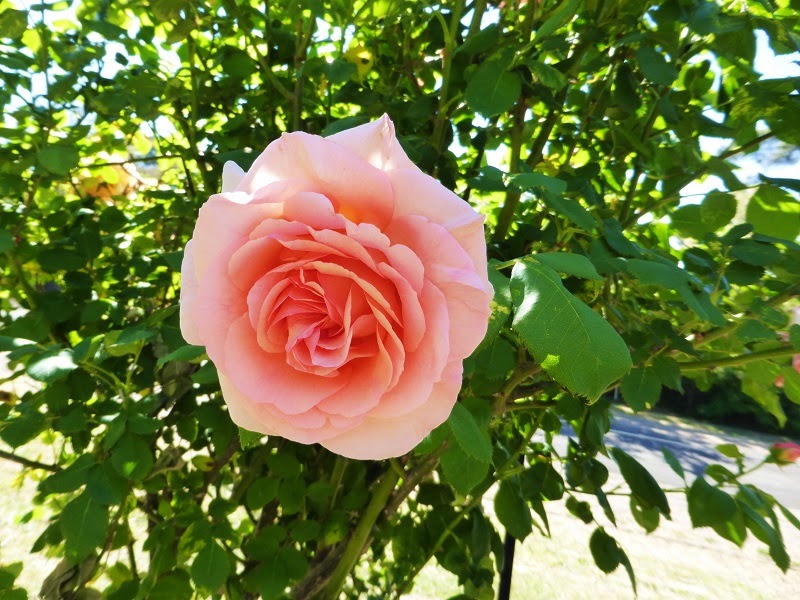 Watching Klara play and enjoying the water reminded me how much Judy & Jade loved jumping in the rivers. You have one gorgeous puppy and it has almost made me want another. I'm resisting the temptation until such time as we finish doing all the rivers in the UK.

Irene, it's hard to be without a dog when you are used to having one. We spent our entire time in the UK petting labradors and waiting for the day we can get one again. We really hope Klara learns to enjoy swimming. She likes paddling and splashing so that's a start.

As for the heat..... I'm dreading it. Summer is my least favourite time of year as it just gets too hot. The bushfires just add insult to injury. We've had a glorious Spring and I wish we could have another few months of this weather instead. :)