This crazy country of ours.  We've had so much rain the last week or two, although here in central Victoria it's eased off now.  In the north of the state and in parts of New South Wales they are battling terrible floods.

The little town of Nathalia have a temporary flood barrier built to attempt to hold the flood waters at bay.  Last night there were townsfolk evacuating after a second evacuation notice was issued with the danger of the town being inundated if the levee breached. On the news they said the water that was appearing on the other side of the levee had actually come from under the road from the enormous pressure of the flood waters on the other side.  Last night they had the army, the State Emergency Service and the Country Fire Authority all frantically plugging up the spots where leaks were appearing.

These photos from the Herald Sun : Nathalia floods.  The metal barrier is holding back what looks to be well over a metre of water.  I don't think I'd want to be standing by that barrier if it lets go. 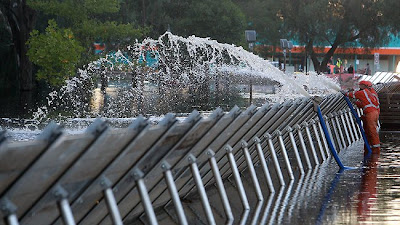 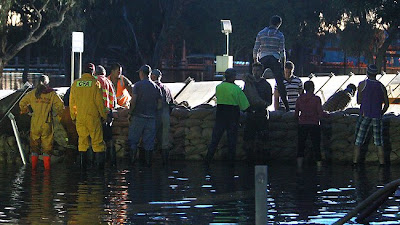 In the words of Dorothea Mackellar :

I love a sunburnt country,
A land of sweeping plains,
Of ragged mountain ranges,
Of droughts and flooding rains.
Posted by Elly and Mick at 07:54

Email ThisBlogThis!Share to TwitterShare to FacebookShare to Pinterest
Labels: weather

I have never seen rain like it, fantastic day today, but with loads of water still running down our garden!

Amazing isn't it. Poor Mick has been trying to keep the gravel on our garden paths. Bit of a losing battle. Elly