For those of you who know Mick, you won't be surprised that he's all but completed the tasks he set himself to be done before we leave.  Now he's just adding to his list.

The final "must do" was to fill in the pit in the concrete behind where we had the caravan.  We couldn't move the van further back because of the pit.  This week he's made a top for it out of railway sleepers.

Today we turned the caravan around and tucked it in the back corner of the covered area - it is actually side on to the direction it was facing before.  It means one side looks at a corrugated iron wall but the other looks out to the neighbouring property.  It was strange going inside the first time after it was moved.  The view out each window was totally different and it felt a bit disorientating.  We better get used to that because our view will change regularly as we cruise along on our narrowboat!

We used to have the caravan with the drawbar pointing out towards where I'm taking this photo from.  The pit (about 5ft deep) is between where the van is now and the wheelbarrow.  You can just make out the change in colour on the ground between the concrete and the timber railway sleepers.

Now we just have to cross over to the door at the left to go inside the shed. 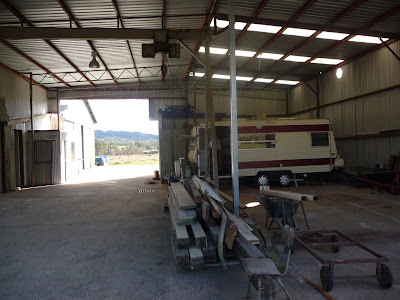