We had breakfast with Lynne this morning after her night shift then a quick shop in Morrisons.  There seems to always be something else we need.

It's been a bit of a baptism by fire the last couple of days.  It began raining some time Sunday night and it's still raining now (Tuesday night).  It was bad enough dealing with the spray from the trucks on the M6 yesterday!

Today we went with Mick's brother Peter to have lunch with their cousin Anthony and his wife Jackie.  I didn't take note of the name of the pub in Leyland but it was a reasonable meal - 2 courses for £5.95.  Coming home we spent nearly 2 hours on a journey that should have taken just over half an hour!  Again and again we had to turn back with roads closed from flooding.  I didn't think we'd ever get back to our accomodation but eventually we encountered a friendly policeman who pointed us in the direction of roads that were still open.

Before we went to lunch today we stopped off at the Recliner Lounge (thanks Peter B!) and chose a pair of recliners for the boat.  First we'll have to sell the existing ones.  Mick's got a plan for the footstools that come with the chairs. 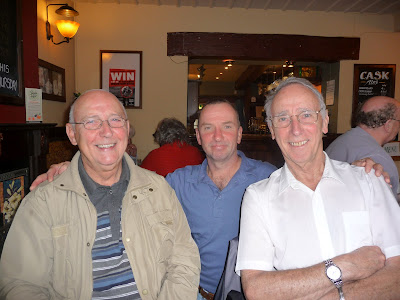