A neighbour arriving in the dark

We thought we'd move along a little today and moor up at Rode Heath.  It would get a few more locks out of the way.  The first couple were single locks but the next went back to being a duplicated one.  We noticed at some of the previous duplicated locks that one of the pair would be narrower than the other.  The first one today actually had the side brick lined wall bulging into the lock a little.  It was narrow to begin with so this was going to be a tight squeeze.

I was on the boat and Mick was peering down anxiously from above.  He opened each paddle just a little and came back to watch.  Then he noticed one of the centre fenders had fallen down.  Hmmm... this wasn't too good.  We weren't sure what to do.  Neither of us could get the fender back up but luckily ours are not large fenders so maybe it would be ok.  We just let the water trickle in as it had been and watched carefully to make sure the boat didn't get stuck.  I didn't at all enjoy being the one down in that lock.  At the narrowest point I'm sure the boat was actually touching the lock walls on both sides.   It was a huge relief when we could see the gap down each side of the boat appear again.

We stopped at the first section of piling we came to when we reached Rode Heath and decided to have lunch and check out what was further ahead.  We'd been caught out before going past a mooring spot thinking we'd find better but then wishing we'd stopped further back.  This spot was ok... opposite some well kept houses.... but there wasn't another boat in sight.  Further up past the next lock there was a pub opposite the moorings.  We went for a walk around the village and to check out the moorings.  The pub was closed as it was being renovated this week.  We um'd and ah'd over whether or not to move and decided we'd stay where we were.

I sat down to work and Mick tried programming the TV.  Not a single channel.  Now that changed our thoughts on the mooring.  Maybe we should go through the next lock in the rain and hope we get some reception higher up.

While messing with the tv aerial, Mick managed another "in the drink".  He dropped his reading glasses.  They're only the cheap sort from the pound shop so the sea searcher didn't come up with them.  Never mind, I've stashed away another 3 pairs in case.

Eventually we decided to move up past the next lock.  It was drizzly but wouldn't take all that long.  Our policy is that we're only allowed to move once to try and get better tv reception.  If the second location is not good then it's just bad luck.  Today we were in luck.

Before we knew it the day had disappeared and it was dark outside.  We had just settled in to watch the 6pm news when I saw a light moving at about narrowboat speed past our window.  Our mooring is opposite the pub carpark but it was moving to slow for a car.  Mick got up to have a look and saw a very long working boat was about to try and get into the space between us and the boat in front.  He decided to go out and help.  It can't be easy maneuvering such a long boat in darkness.

He returned a while later saying it was nb Alton.  We'll look out for you once our stove is installed.  We'll be looking for coal then!

Not many photos today, but here they are :
1. Hard to imagine how rope could wear grooves in cast iron (from the days of narrowboats being drawn by horses)
2. Heading into a lock
3. And looking back the other way from inside the lock
4. Not many leaves left on trees now
5.  He was having a great old time 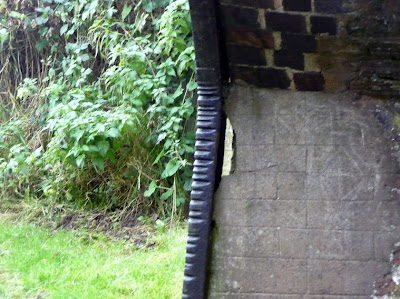 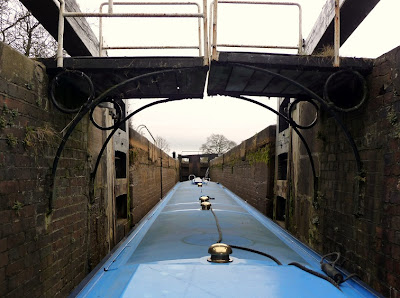 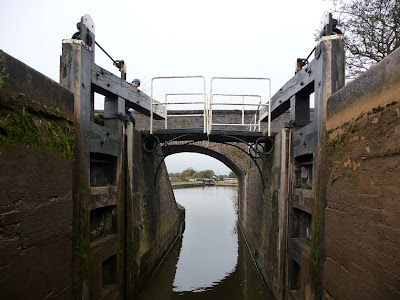 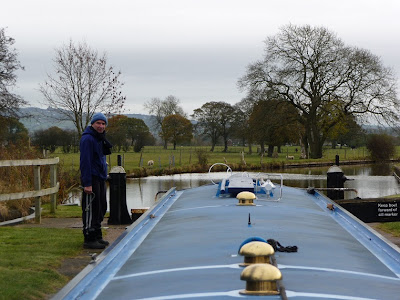 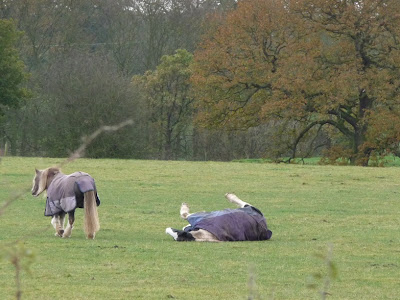 Hi Elly,
Alton sell the Pureheat fuel I told you about. They're usually quite a bit cheaper than the chandleries too. The boat's operated by Brian and Ann-Marie and is based up on the Macclesfield Canal. They're a very friendly couple and also sell diesel and do pump-outs. We're hoping to bump into them once we get back up on the Macc as we're running a bit low on coal.
Yvonne

Hi Elly and Mike, Just a quick comment to let you know that I am enjoying reading about your travels, as we are doing the same thing. I found your blog when looking for more information on nb Ashdown, which we have subsequently purchased. We started out around the same time you did but are currently venturing south, after deciding not to take a marina mooring for winter.
Sounds like you are having as much fun as we are.
Regards
Michele

Hi Michele,
Great to hear from you. I really liked nb Ashdown! If you'd like to be in touch then leave a comment with your email address and I won't publish it.
Cheers,
Elly