Dear, oh dear.  We were given a £10 electricity card when we did our marina paperwork yesterday.  There was a little credit left on our meter from the previous moorer so I said to Mick we'll add the extra credit later.  BIG mistake!  We were warm last night while watching tv and Mick decided we should leave the borrowed column heater on overnight to keep the chill off the boat.  In the middle of the night Mick was up and rummaging around with a torch.  We'd used up the last of the credit and the heater had gone off.  He decided at 12.30am that he'd go out with the electricity card and top up our meter.  I don't know exactly what he did but he came in mumbling and grumbling (and a little worse).  He'd somehow managed to buckle the card so now he couldn't get the meter to accept it.

In the morning it was cold when we woke.  In fact it was so cold that my nose felt like an ice block.  It had been the coldest night we'd had so far.  Looking out the rear hatch of the boat everything had turned white overnight with an extremely heavy frost.  The spider webs on the boat next door were frozen and our little timber taff seats were covered in prickly slivers of ice. The pontoons were totally frosted over.  Our portholes were covered in a thick layer of ice - both inside and out.

The marina office doesn't open until 10am on Sundays so there was nothing we could do about our power problem until then.  We rugged up to have our breakfast - Mick with his beanie on his head.  I had a lukewarm shower - with no central heating the only way to heat the water would have been to run the engine and we didn't want to disturb the neighbours on a Sunday morning.  I was so cold by the time I got in the shower that the lukewarm water felt just fine.

We rugged up again to walk down the towpath to find Ray and Diane on nb Ferndale.  By then the sun was fighting it's way out and the serious frost was beginning to melt a little.  It was turning into a stunning day.  We walked briskly along until we spied their boat ahead.  The engine fellow diagnosing a clogged fuel line.  While he sorted the problem we all had a cup of tea/coffee and a chat.  Somewhere through the drinking of my cup of tea I got feeling back in my toes!  Finally the engine coughed back to life and nb Ferndale was on the move again.  Mick and Ray walked on to the lock to prepare it while I stayed on the boat with Diane.  I think there was more talking than walking as they didn't make any headway on us towards the lock despite our slow speed.

We were all aboard heading into the marina so they could pump out (the loo) and fill up (the diesel).  I walked back with Nicky from the marina office to resolve our electricity card problem while the other three took the boat out the exit and back onto the canal and back in the entry of the marina to moor nb Ferndale back onto her pontoon.

Next was the boat inspection as Ray and Diane hadn't seen nb Parisien Star yet and then it was off for Sunday lunch at The Wayfarer.  The hire car that Ray and Diane used for their holiday wasn't being returned til Monday - it was our first car trip since 12th October.

Back at the marina I spent a few hours working and the day was all but over.

Yesterday before we left Stone, Mick had gone to the Food Co-op for a loaf of bread.  He returned saying there was a headline on front of one of the newspapers saying this Winter is expected to be the coldest in 100 years.  Surely not!  I wasn't quite sure if he was just trying to wind me up.  I did a google search and although it appears that this publication may be prone to over-dramatizing , sure enough : http://www.express.co.uk/posts/view/358717/Coldest-winter-in-100-years-on-way


It says; "BRITAIN will grind to a halt within weeks as the most savage freeze for a century begins.  Temperatures will fall as low as minus 20C in rural areas, forecasters warned last night, while heavy snow and “potentially dangerous” blizzards will close roads and cripple rail networks."

Now, this isn't a welcome thought... I think I'll buy another coat, a pair of waterproof boots and some clip on ice grippers for our shoes!

Photos of a frozen start :
1. First thing this morning
2. And a couple of hours later
3. 8.30am this morning - minus .5 outside in the cratch, 4.4 degrees inside
4. Next door spiderweb
5. The frost on the roof of the cabins defrosted on the sunny side
6. Frozen foliage
7. And frost sprinkled holly
8. Mick found a pushbike that had been dragged from the canal!
9. nb Ferndale coming into the marina for the second time
10. Ray, Ray.... Diane had spilled gravy on her top 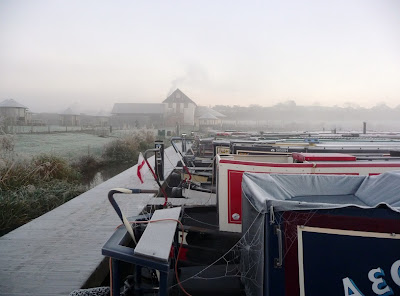 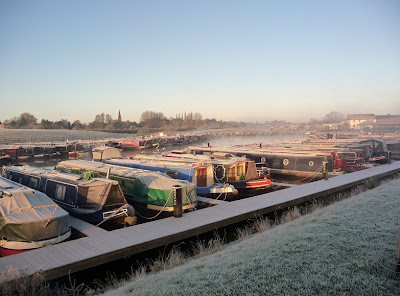 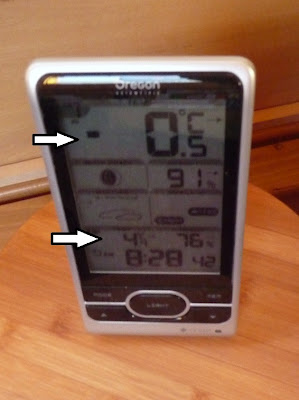 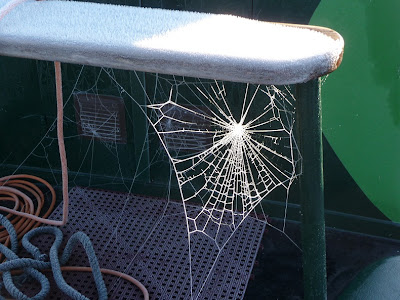 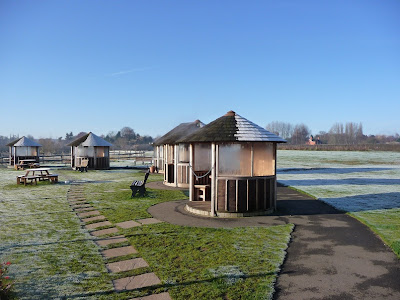 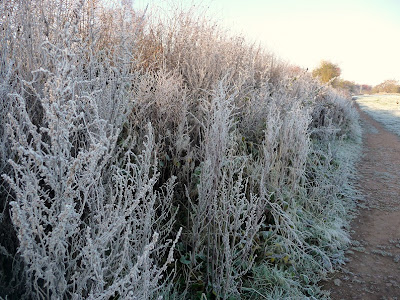 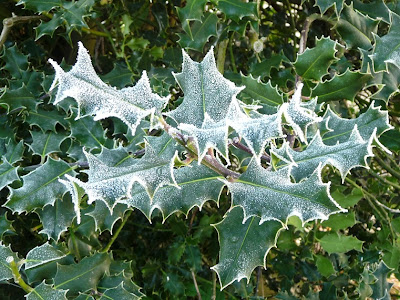 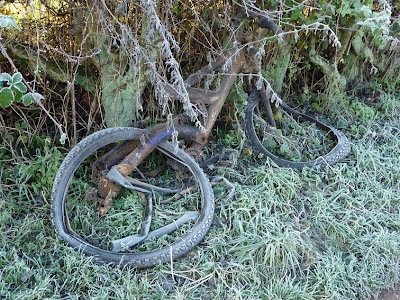 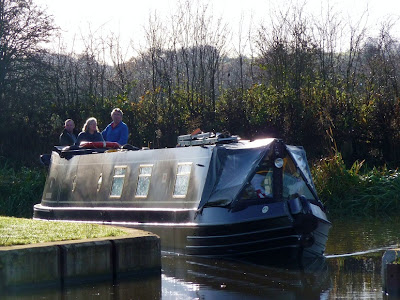 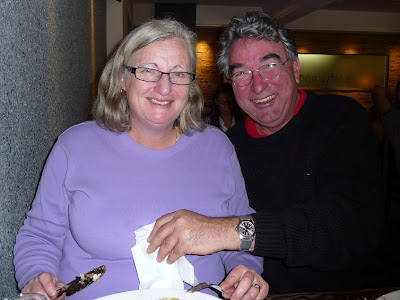 The winter before last the temps dropped to -18 regularly and the ice was over 6ins. thick for weeks. Better tell Mick to get a move on with that stove :-)
Yvonne

The Express runs that same story at least once a year. Occasionally, by the law of averages, it's right.

To be honest, if they're forecasting the coldest winter ever then I'd actually be buying t-shirts and extra suntan lotion - I mean just look at the drought summer they forecast for this year :-D

Thanks guys... I'm not sure if I feel better or worse about it now! We'll survive regardless.
Sounds like your weather forecasts are as good as ours back home. The only thing we knew for sure was the it would be stinking hot in Summer.
Elly