As much as we've enjoyed Etruria it was time to move on. First stop was back to the water point for a top up.  As we were filling the tank a boat pulled in behind saying they'd headed off up the Caldon Canal only to discover it closed a couple of miles up.  They'd had to reverse back through 4 locks!  Why can't the Canal & River Trust put a big sign at the junction so people don't turn down there..... or at the very least the winding hole after the water point.  Surely it would make sense to put warning at the winding places either side of a closure?  I know the closures are made public in advance but we had toyed with the idea of going down the Caldon for a bit but decided not to.  We may have made the same mistake.

Mick wanted to try his reversing skills to reverse back to the junction rather than go forward to the winding hole and then turn back.  He had seen a boat do the same thing the other day and wanted to give it a try.  He didn't do too bad a job of it.

The first lock down of the Stoke flight is the deepest lock I think we've been in.  It's also the first lock we've used that you need a "lock key".  We were pre-warned about needing the key by Geoff from nb Penny Royal who kindly cycled back to us the other day after they'd gone through the look and thought perhaps we mightn't have a key.  We did have one - in a box of goodies left on the boat that we had no idea of the purpose for.  We kept them knowing we'd probably need them some day.

We really enjoy the cruising through Stoke.  Every turn reveals another old building or brick kiln or some other relic.  Today we passed a couple of lovely brick kilns surrounded by modern apartment buildings.  Obviously the developer had been give the go ahead as long as the kilns stayed.

We shared lock duties on the next few locks.  The final of the Stoke 5 was rather violent with it's water flow as I filled it.  I'll have to make note of that for when we return coming the other way!  When we reached the long section with no locks I went inside to work.  Mick called me up when Trentham Lock came into view.  What a pretty spot that is.  A lady and her two young granddaughters were walking by and the little girls were fascinated by the lock.  It's another fairly deep lock and grandma fretted every time one of them took a step within a couple of metres of the edge.  Eventually she relented and took them by the hand to the hand rails for the lock ladder so they could all peer over the edge at Mick down below in the lock.  They waved furiously as we chugged away.

Heading into Barlaston is rather picturesque with Barlaston Hall perched up on the hill.  We'll go for a walk tomorrow to have a look at it.  We moored up, on a bend again, shortly before the pub and bridge.  We have a railway line just over from the canal but the trains really don't seem that noisy.... nothing like the trains at home!  It helps that most of them just whizz by and don't stop at the Barlaston station.

Today's selection :
1. Heading into the first lock after reversing out of the junction (behind the brick wall at right)
2. The top lock at Stoke - a very deep one!
3. Two old brick kilns surrounded by modern apartments
4. A canalside cemetery
5. Trentham Lock
6. These signposts are all around Stoke.  I like them!
7. Sunny but cold later in the day 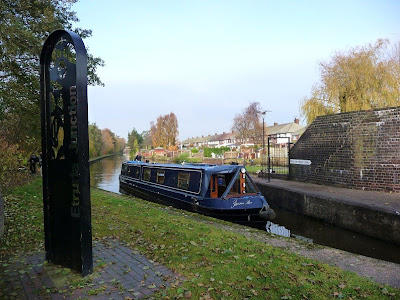 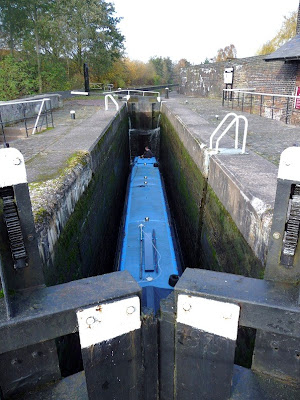 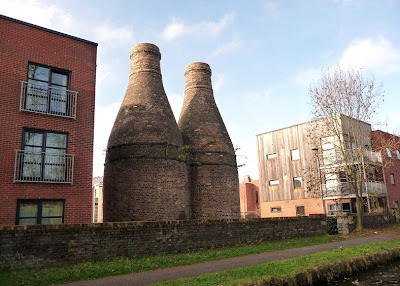 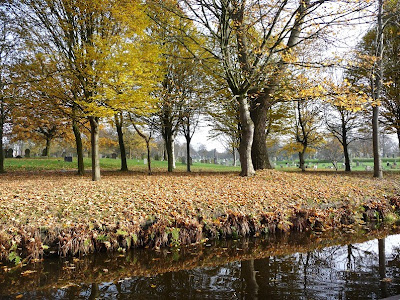 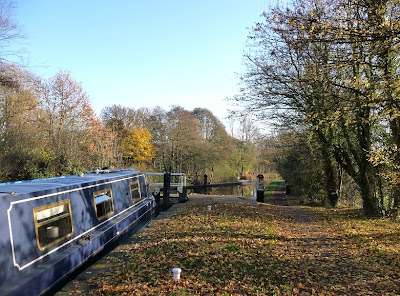 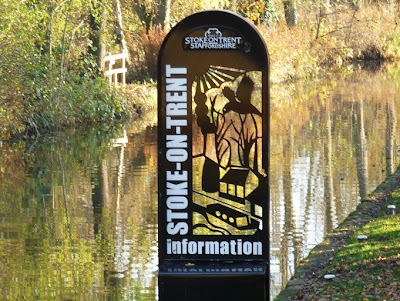 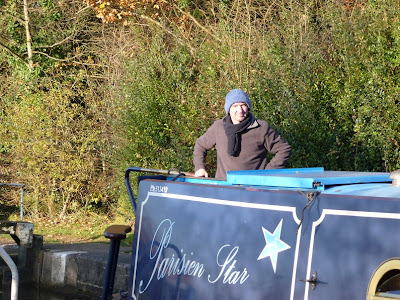