We've had a huge weekend preparing for our garage sale next weekend.  We've put advertisements in our local paper and the regional paper.  Hopefully we'll get lots of visitors.

I had no idea we had this many things.  It's ridiculous!  We had dozens of boxes packed away from our Melbourne house that have been stored in the shed for 8 years or more.  There were things I don't even recall owning... well almost.  We are lucky that we've been able to set everything up so far in advance.  We've set it up in Mick's workshop.  We won't have to cover it or pack it away in between.

Mick has made a start on pulling out the old furniture etc from the storage sheds in our yard.  He's collected many old items of furniture over the years from clearing sales.  He's going to keep some to restore in future and sell the rest off.

We have two neighbours who have each had an old house moved onto their blocks of land.  They both like collecting old stuff like we do.  They've been competing with each other over who has been inside our house to have a look (the talk is starting to spread around town that we're going to be selling our house), who got to buy what of the rusty farm equipment in our yard, and what they bought when they each separately come down over the weekend to "preview" our garage sale.

This is the chaos we've created in trying to sort out all the boxes.  Hmmm... I think I might have to stay home this week and try and sort it out. 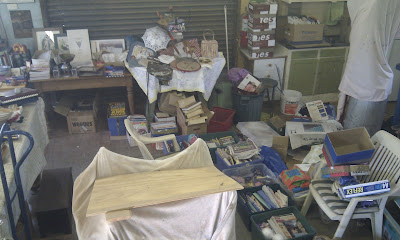 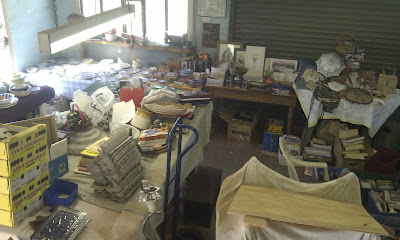 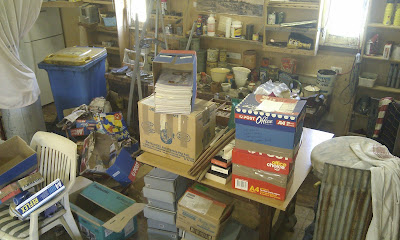 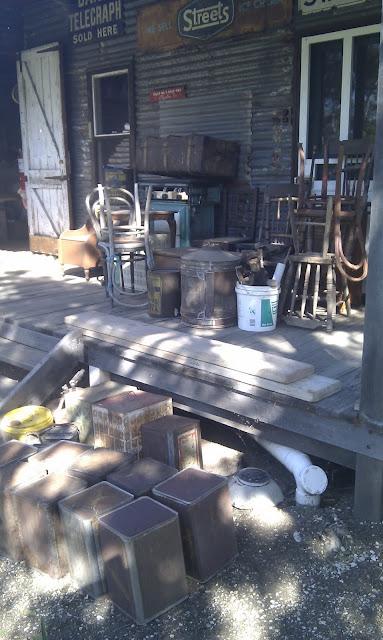