Why, oh why, does time go so slowly when you're sitting back waiting for something but when you are busy and have a lot to get done the time seems to just whizz by. I feel as though we've been running around like demented chickens!

The house up the road was finished last weekend so the lease was signed, the tenants paid the bond, I filled in all the paperwork and met the tenants at the house for a final inspection.  Now just to get keys cut for them in preparation of handover on Friday.  All good.

Meanwhile I've turned the house upside down with packing.  After 10 months of it looking spotless at all times in case a potential buyer wanted to inspect it, we've now gone to absolute chaos.  There are boxes everywhere and cupboard contents emptied onto the floor.  It is so much harder packing this time than ever before, and we've done this quite a few times in our life together.  I'm taking extra care in how I pack things as I'm conscious that they may be in storage for a couple of years at least.  I've also been keeping in mind what we might want to pack in boxes to ship to England for our boat life.

The packing is often interrupted by visitors, both pre-arranged and unexpected.  I don't really mind this because we'll be moving out of this town in a few weeks so it's lovely of people to call in and ask where we'll be moving to and have a little chat.  My family members have come to check out the end result of the house up the street - my mum last weekend and my brother and his wife came up yesterday afternoon for a last visit to this house.  My sister in law in particular has spent a fair amount of time here as she's the one who looked after our dogs whenever we were away.  I made the most of them coming up by ringing before they left Melbourne and asking them to bring their Mitsubishi Triton rather than the sedan which is their other car.  We loaded up the tray of the Triton with boxes and other items and did a run out to the shed where we'll be storing everything.  It was a good load of boxes out the way.

Mick was out there for the last couple of days setting up the bathroom for us.  The plumber came and installed a hot water service and Mick's been building the shower.  We had agonised over what to use on the 3 walls of the shower as the panelling we used here at home is quite expensive and for a temporary bathroom it was a lot of money to spend.  I spoke to Rachel at sewing the other night (she works at the local carpet store) and she suggested "wall vinyl" which I'd never heard of.  Next day she sent me a message that they had enough left over from a job that would do our shower.  $30 thanks!  What a bonus!!

We set aside this morning (Sunday) to go and look at caravans.  We had found quite a few advertised but they were located all over the state.  We made a time to look at one that was just over an hour away and when I rang the lady she said they had a couple of others we might like to look at too.

We looked at about 4 of the caravans they had for sale and ended up choosing one $3000 over our budget (almost the amount of furniture we sold to our house buyer!).  We decided that we should get something we'd be happy to live in for a while and that we could use once we come back from the UK.  It also feels rather familiar to me because it is identical in layout to the one we hired 17 years ago when we were building our little house in Melbourne.  It will be good practice for living in a confined space.

Mick will go and pick the van up next Saturday morning and I'm hoping my mum will come and help me give it a good scrub.  I haven't told her this yet!!

So another item ticked off our list.  Here is our temporary home : 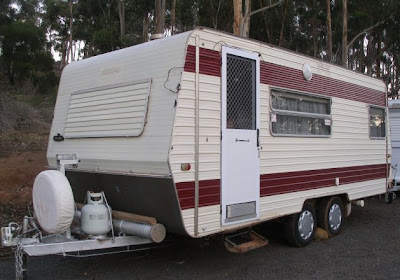 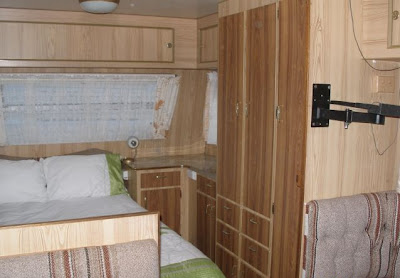 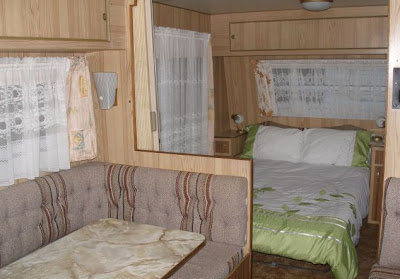 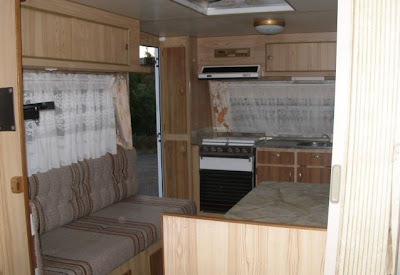 Email ThisBlogThis!Share to TwitterShare to FacebookShare to Pinterest
Labels: caravan

It's amazing how our lives seem to mirror each other.
Nutmeg our beloved basset hound died last year.

Mum is in dementia sensitive aged care so we can't go just yet. And we r 2 watching the Aussie dollar slide with much sadness.

We also lived in a caravan for a couple of years. The interior similar to your new one.

With ours various things were always on the blink. Hotwater for one. Brrr in winter. An old sailers trick to heat the caravan is to put a terracotta pot upside down over one of the gas jets. Makes the van nice a toasty. Turn it off before u go to bed though or might sleep longer than u intended.
Neal & Marie

N & M, I'm just hoping everything works as it should in the van! We will have backup at least. We can use a little electric heater as we have power hookup, we'll have our house fridge in the shed, so the main thing will be keeping the stove working.
As for the dollar, it's so frustrating. Just a drop from 62p to 61p to the dollar costs us over 1000 GBP! That goes a long way on living costs over there.
Elly