It was a very peaceful night tucked up in the little basin.  The lights were out early on Parisien Star and Winton's Folly.  An early night all round.  We set off around 9am with a bit of anticipation in the air as we prepared to tackle the Rochedale 9.

The first lock was ok as we muddled with the different type of anti vandal lock.  Then it was a descent to beneath a building.  It was smelly and grotty.... the ground littered with all sorts of unmentionables.  The boys were on the boats, hovering between some large concrete pillars and the girls were battling to open the gates.  We tried, and tried, and tried.  In the end I crossed over to Carols side and between us we managed to force one gate open.  They brought the boats in through the one gate and then I could cross the back of the boats to go and wind my paddle.

We had to hop back on board for the following lock as the towpath didn't go through to it.  There was a wobbly floating pontoon to get back off at the next lock but it was only short so meant we had to scoot along the gunwales.

The next lock again and we were in a bit of trouble.  The water was flowing over the top of the gate with such force, and again over the bottom gate.  There was no way we could open it.  Eventually with paddles open and three of us pushing the gate we managed to get it started.  That's all you need.... a start.  The problem was we were now all on the same side of the lock and there was something stuck behind the gate.  It wouldn't open all the way and the gap wasn't wide enough to get a boat through.  Mick brought the boat forward gently so I could clamber onto the bow and then onto the opposite gate so I could open that one too.

We had a couple more locks almost as difficult. Hard work they were!  It was interesting that some of the gates were opened using a windlass the turned a winder with a chain on it.  The chain was linked to the gate and that's how it was pulled open.

I had to smile when I sat down to type this blog entry. There was a comment on yesterday's post from Alan, the lovely fellow we met on the boat next door to us on the hard standing at Aqueduct Marina on our very first day.  He warned that these locks would be a nightmare due to rain overnight.  We were wondering if they were always so hard to operate!

So now we are tucked up along the short Castlefield arm.  What an enjoyable trip it was today.  Despite the hard work it was fascinating.  There were interesting buildings to look at and some rather interesting folk to say hello to.  The weather held out and we even had some sunshine.  We didn't mind it one bit.

I was amazed to get an email from my mum to say that the long lost Christmas parcel that she posted last November was delivered back to her by the postman.  She had made an error on the address. But, where has it been for nearly four months?! 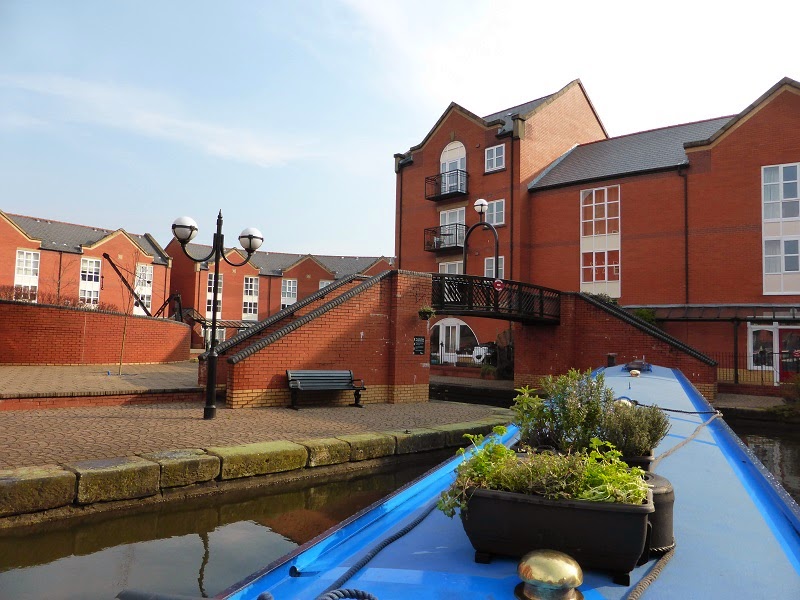 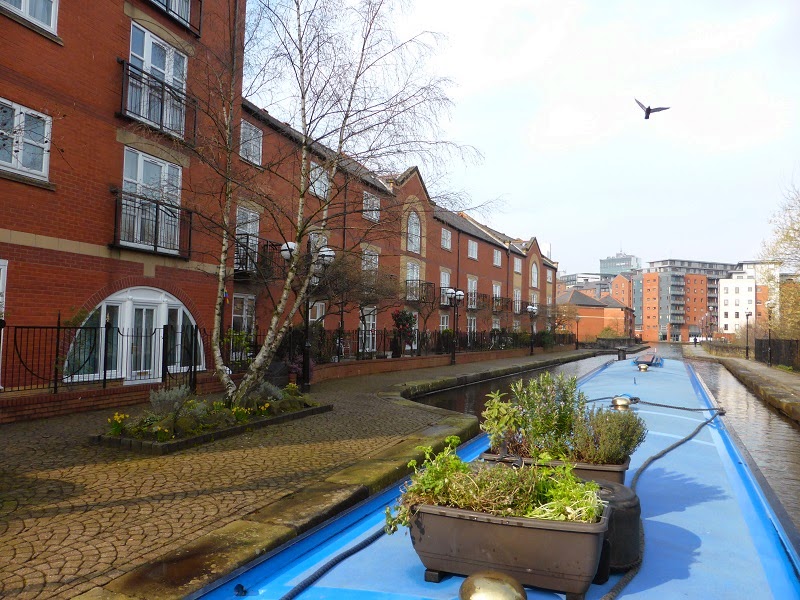 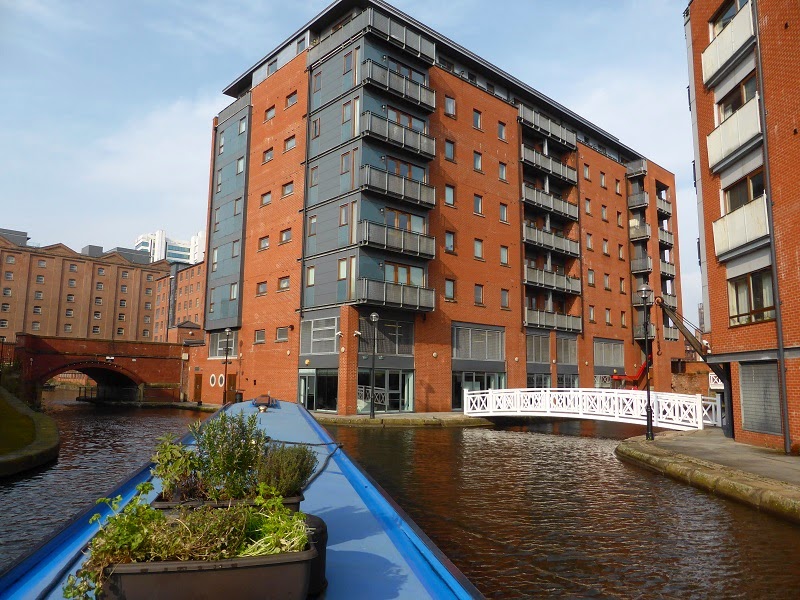 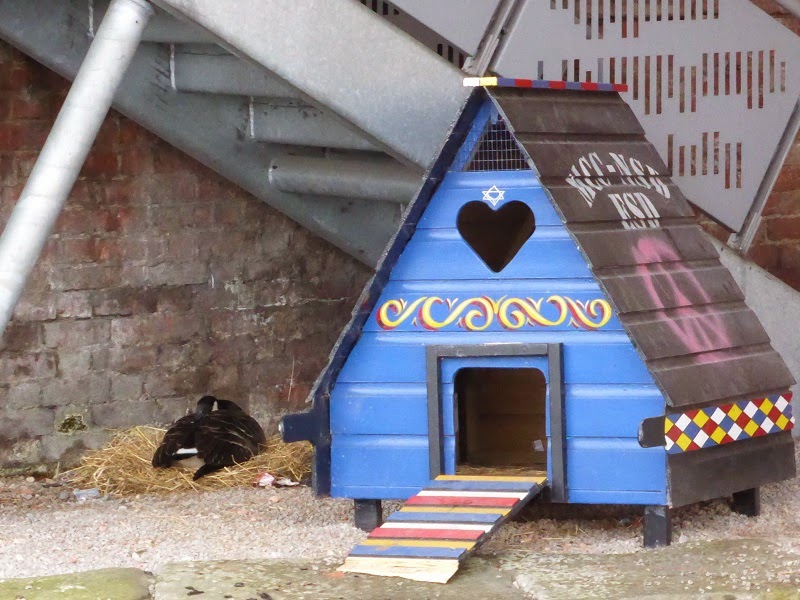 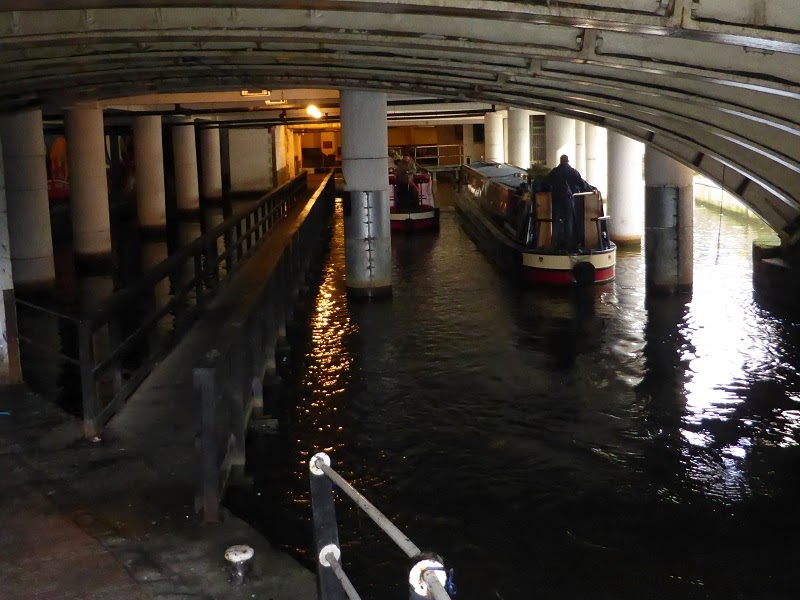 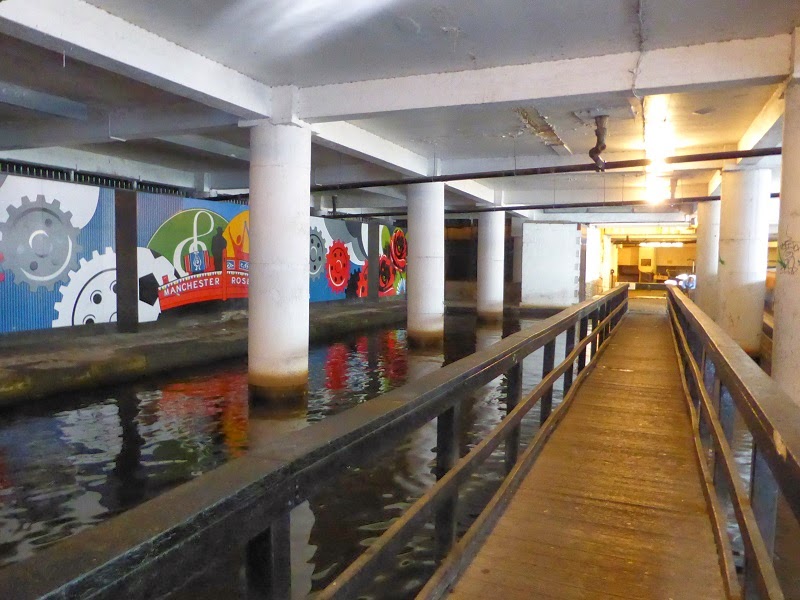 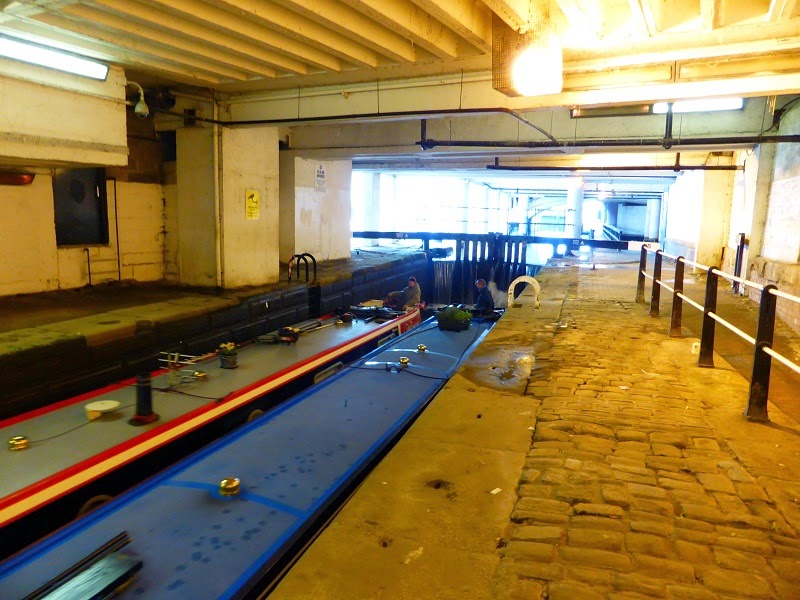 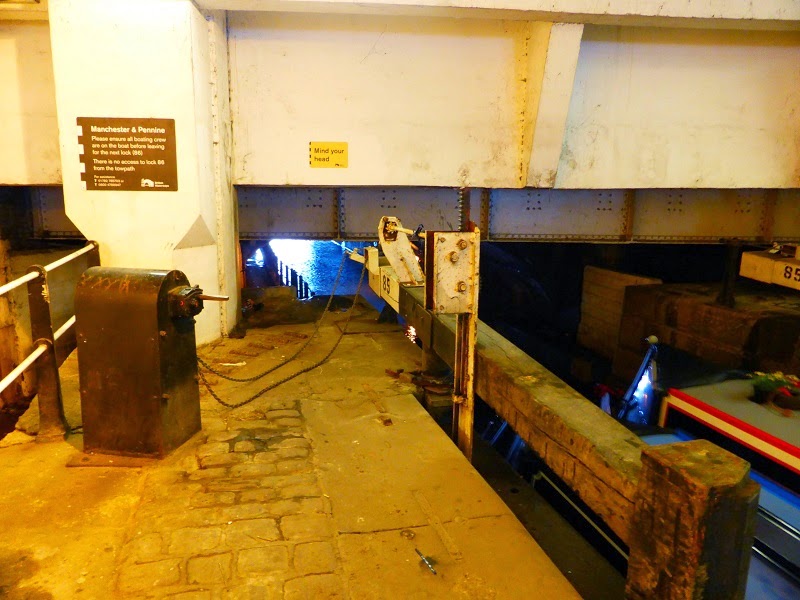 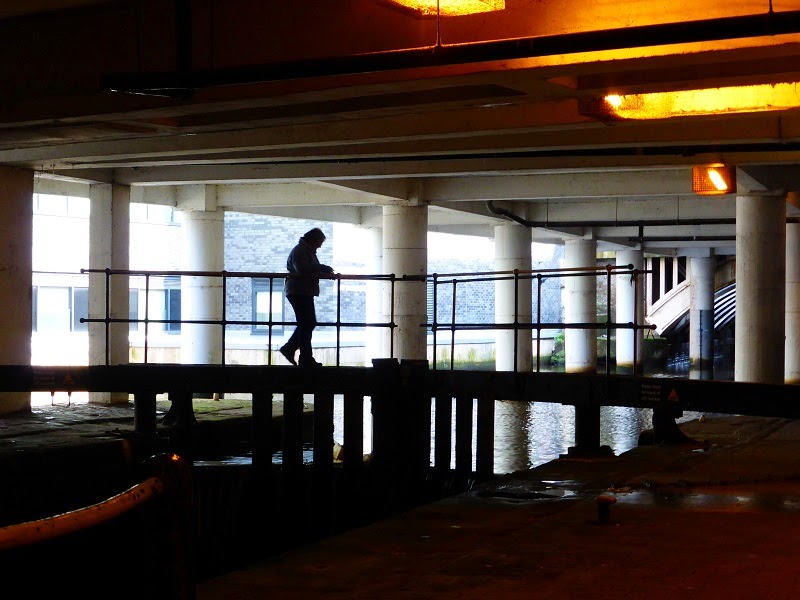 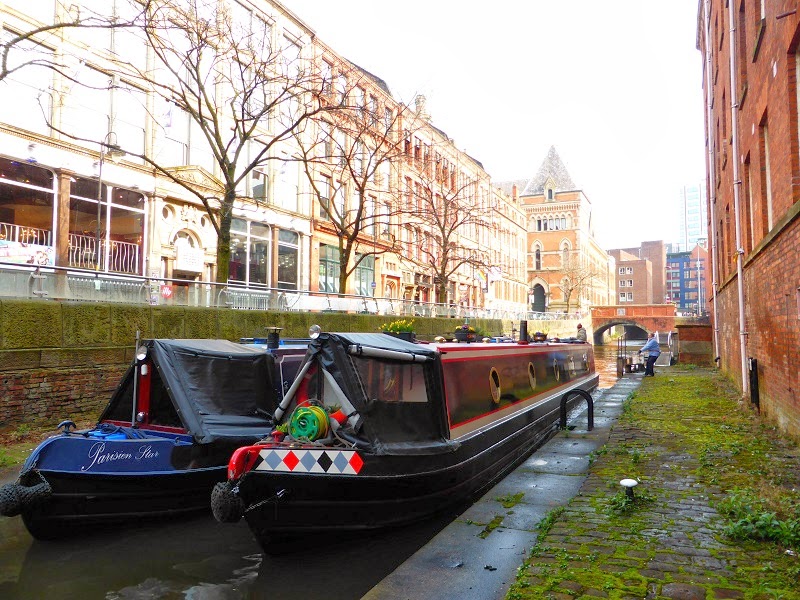 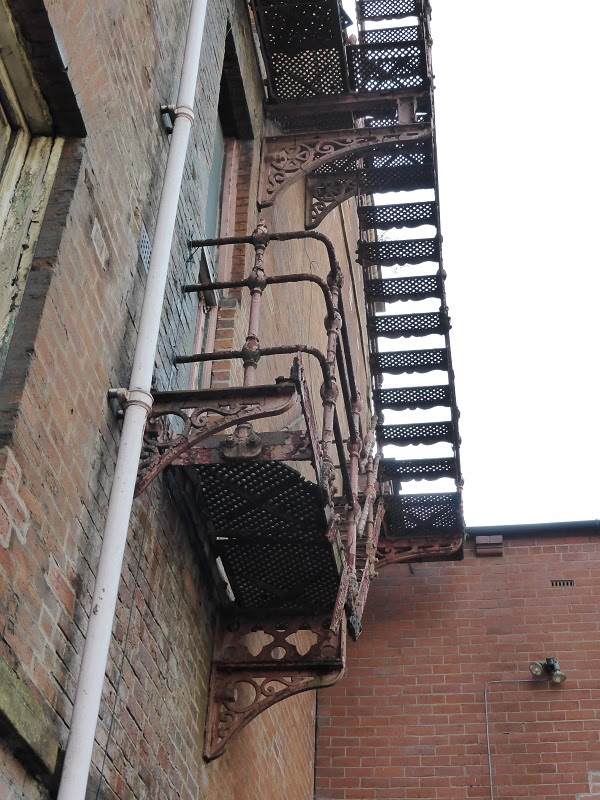 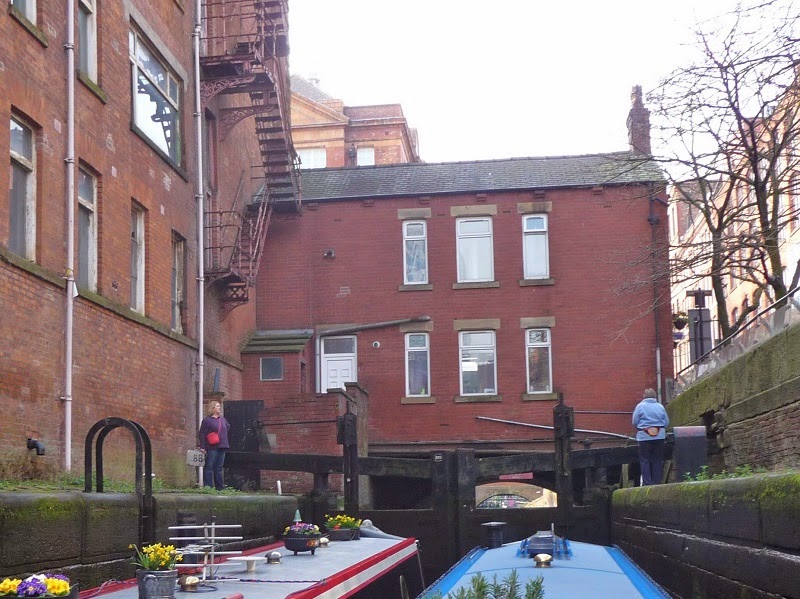 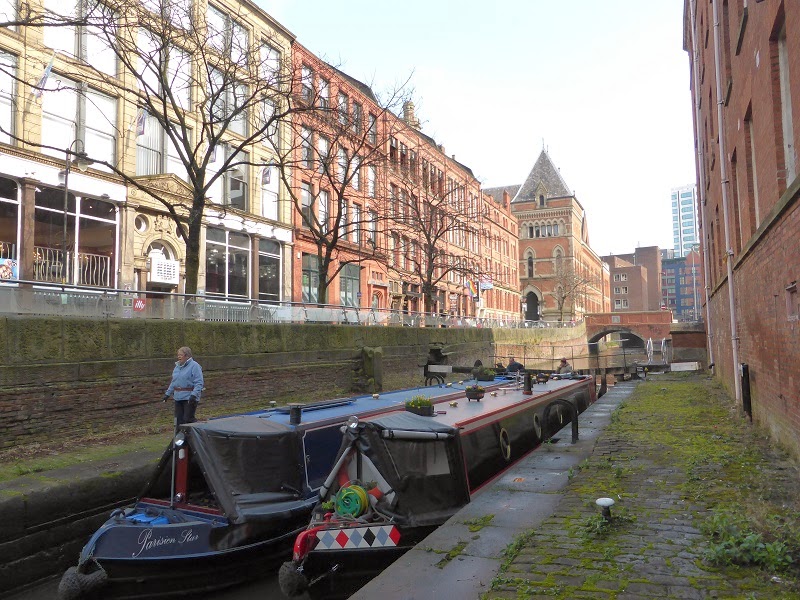 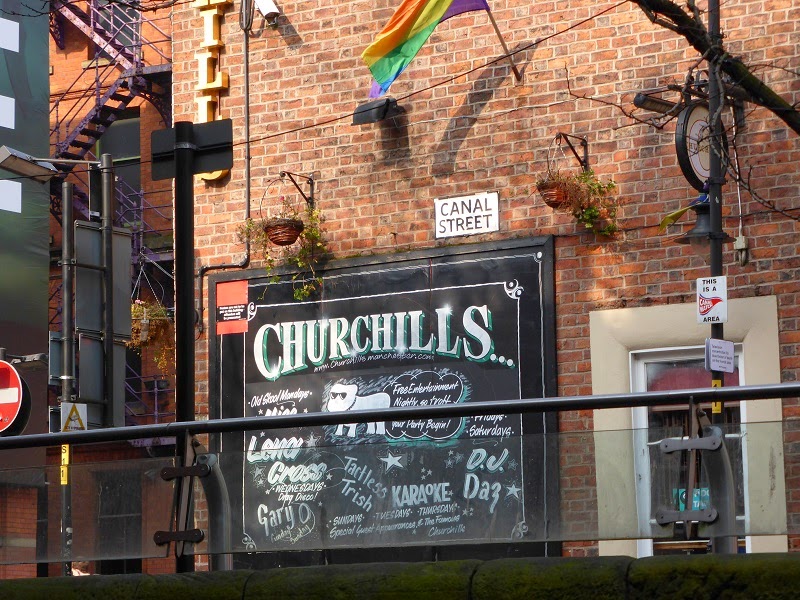 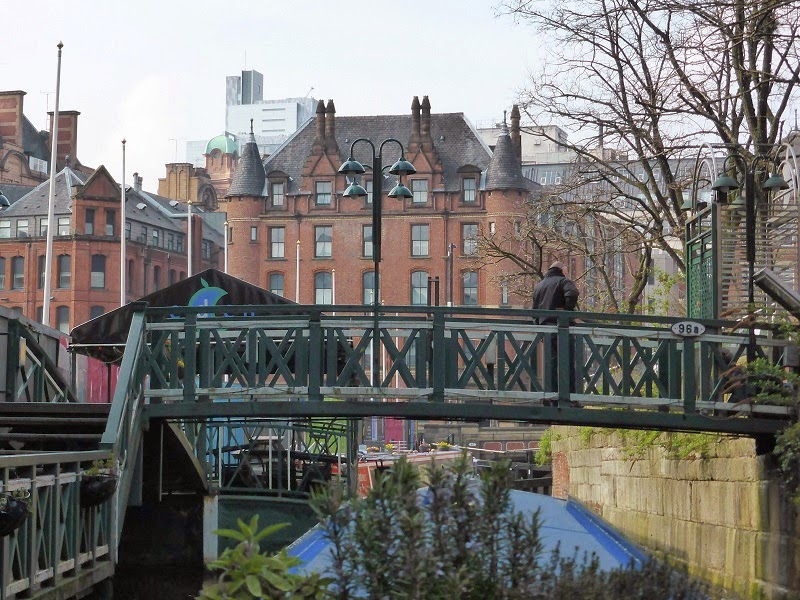 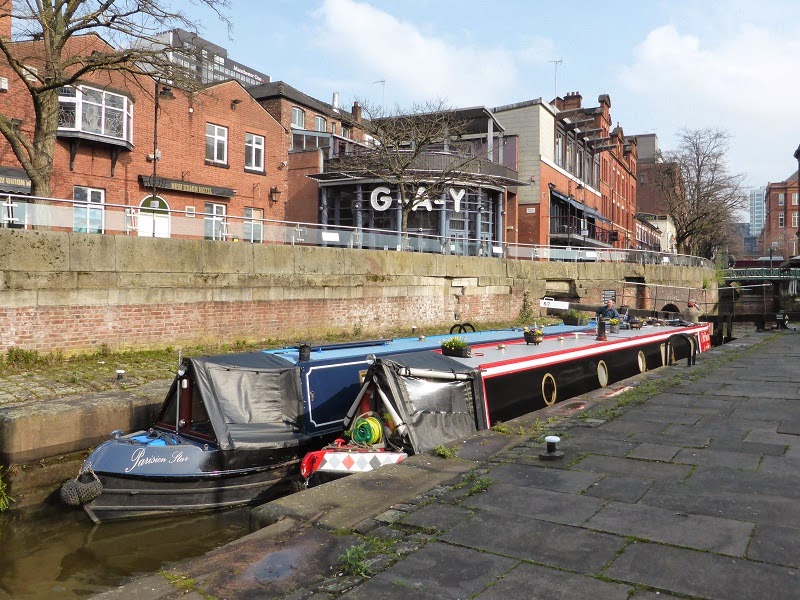 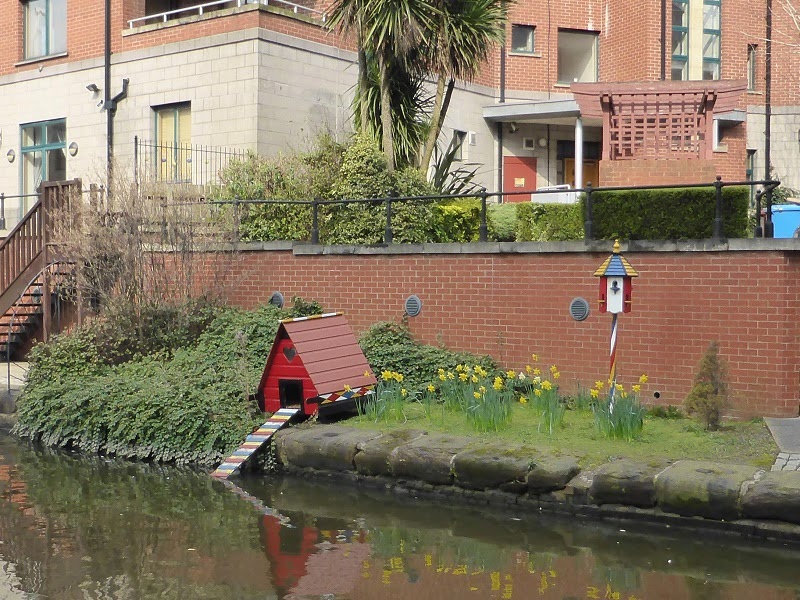 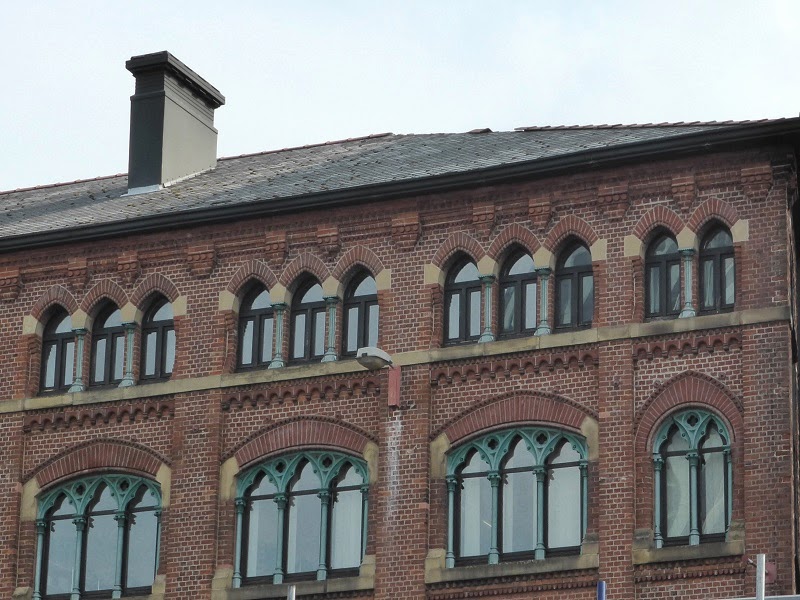 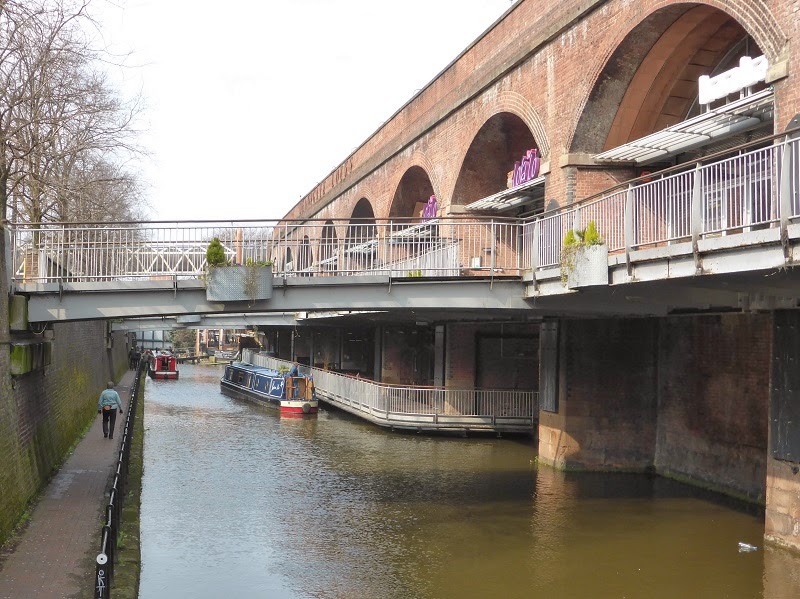 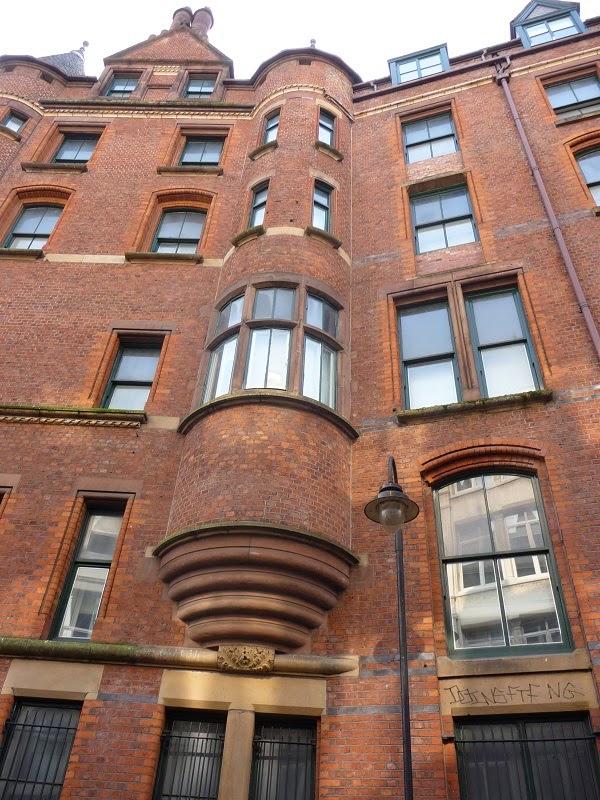 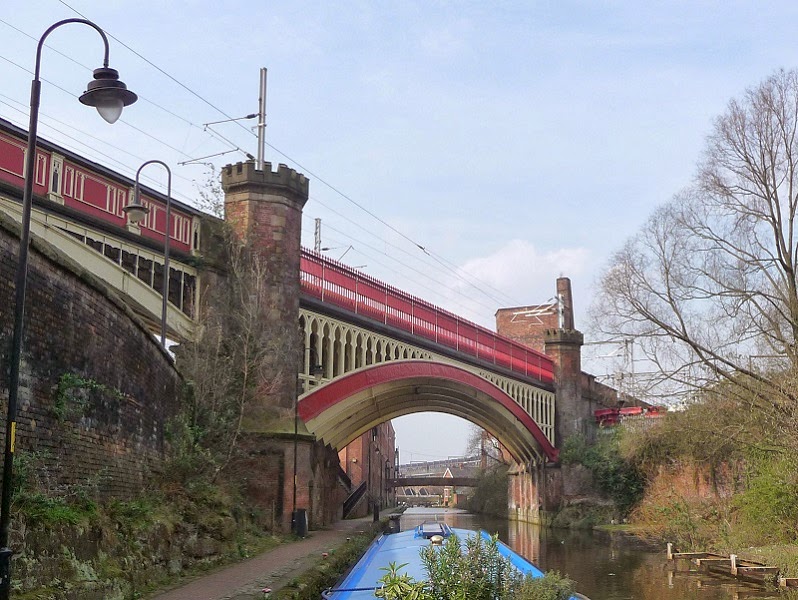 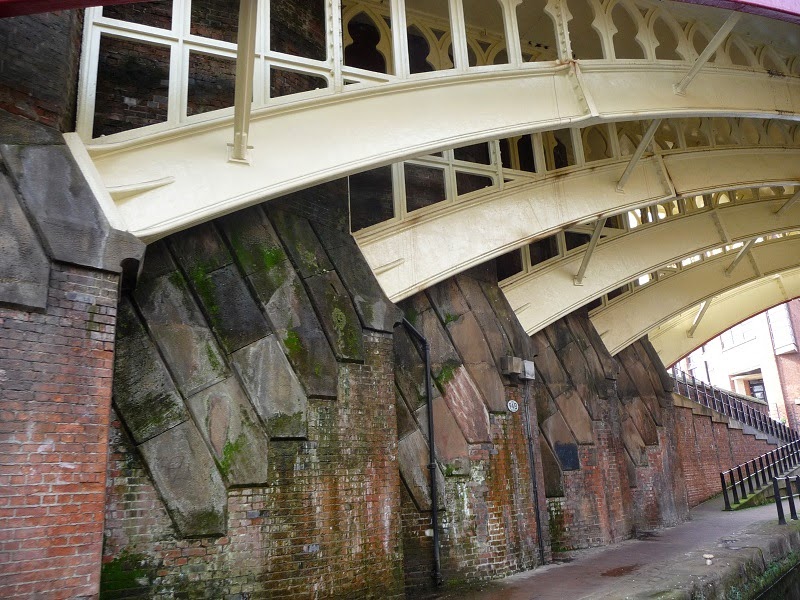 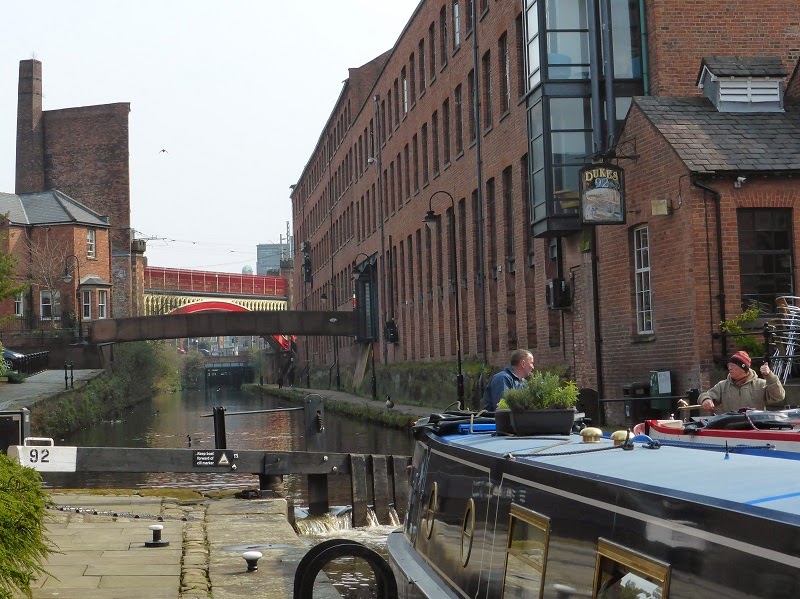 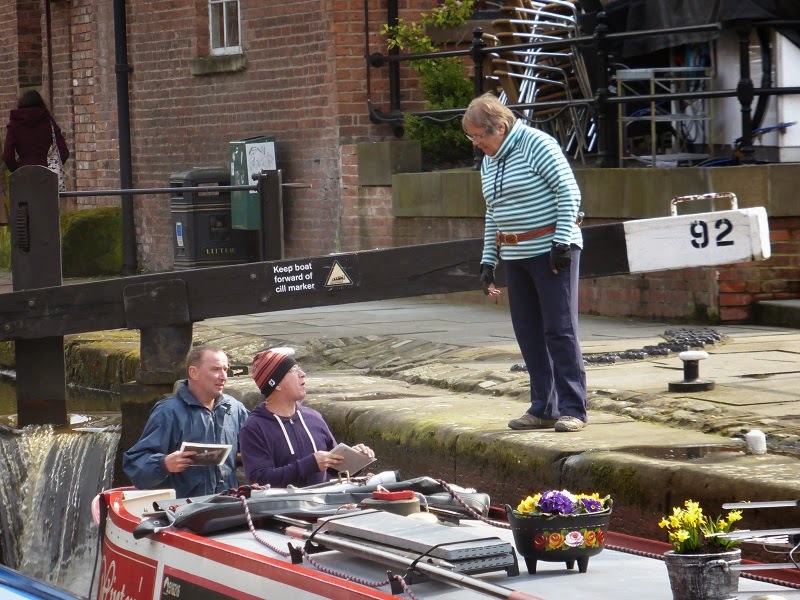 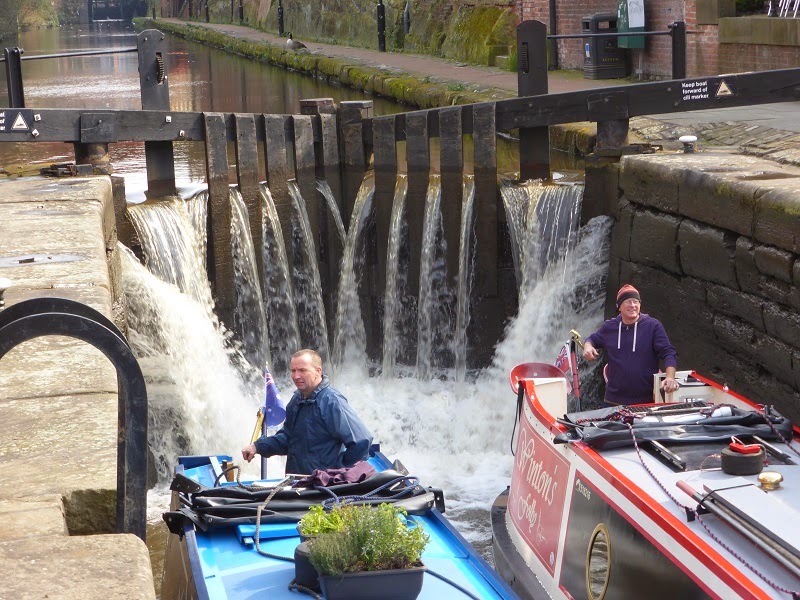 You have once again brought back memories for me. About 8 years ago we spent a couple of months in the UK as my husband was working with a number of different UK universities, including one in Manchester. We spent two weeks living in an apartment in the old canal-side warehouse shown in your photo with footbridge 96a in the foreground. We ate at the restaurant across that bridge one night. I spent a number of sunny hours sitting by Princess Street Lock and also explored Castleford and Salford Quays. One day I hope to do it all by boat! I think we did the 4 Counties Ring on that trip, much of which you have also let me travel again via your blog. Thank you :-)
Deb (NZ)

Deb, glad you're enjoying reliving some UK memories. We will be reading blogs and doing the same in years to come. That's a lovely old building isn't it.
Elly