It felt like coming home when we turned into the Ellesmere Arm.   We even had 2 lots of "friends" to wave to on the way in!  Firstly, a lovely couple on the boat that had been moored behind us last week.... and we embarrassingly can't remember their names now... and as we made our way to the end of the arm to turn around, we passed nb Epiphany.

When we left this mooring last time we headed off early in the morning.  I think Mick wanted to do that so there'd be nobody to witness his attempt at turning the boat.  It really does look like a very daunting task when you see the length of the boat and the amount of space to turn it.  Even that first time he did a fantastic job of it.

We decided to turn the boat before mooring this time so our side hatch would be facing the canal (better for duck feeding) and we'd earmarked a space further back in the arm.  There were quite a few people walking around the little basin and despite chatting at the same time to an elderly couple, Mick executed a perfect turn!  Now we're looking out over a field with a couple of houses behind rather than a building site with the Tesco neon sign as the background.  It wasn't a huge day for us so we were happy, relaxed and ready for a walk.  I really like it here.

The cruise today started with going down the 2 New Marton locks.  I walked ahead to the lock to find a hire boat on it's first day out and attempting the first lock.  Now, I remember how terrified we were of doing our first lock and listening to the lady brought back those memories.  The 2 couples had a pair of dogs with them.  One of them kept yelping the entire time while the pair of them darted up and down the lockside (the dogs that is, not the couples).  I thought at first it wanted to get back on the boat but when they eventually got the water level enough to open the lock gate, the dog refused to get onboard.  They called, cajoled, yelled... looking increasingly embarrassed... but that dog wasn't getting back on the boat.  I could see Mick standing beside nb PS watching the whole charade.  By the time they finally caught the little bugger and got him on the boat relations between husband and wife were decidedly frosty.  Oh dear, not a good start to a week out.  I'm thinking that little dog won't be allowed off the boat at the next lock.

Last night I posted a list of narrowboating words we've come across.... some of which we've had to look up what the mean.  I had two comments, one mentioning I hadn't included the meaning of "bilge" and the other telling me of an error.  When I had looked up the word "transom" it said it was the place where the steerer stands but that isn't technically correct.  You really shouldn't stand on the transom (otherwise known as the "counter") as you could be knocked overboard by the tiller bar swinging around - either by the steerer or by the rudder bumping into something underwater.

I found this photo we took of nb Parisien Star while she was out of the water.

On the photo below :
Sacrificial anodes - the 2 silver patches on the bottom left
Rudder - bottom right
Propellor - under the boat, behind the rudder
Gunwale - the ledge below the the signwritten panel (above the first row of blue)
Tunnel bands - the cream and red (originally there so you could tell whether the boat you see at a distance is heading towards you or away from you)
Swans neck - the S shaped bar top right (we didn't have our tiller bar on in this photo)
Taff seats - the little wooden boards you can see on the right
Transom or counter - the semi-circular back deck.  When steering you stand inside the back doors, and the light blue "hatch" on top slides forward. 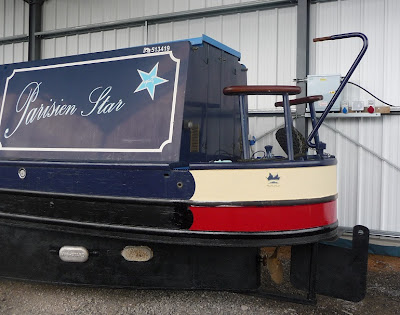 I always used to think that returning to places was a waste of time, given how many other places there are to visit. But now I find great plasure in revisiting places we've been before.

Which is just as well, because I think you're going to have to do the Llangollen again at some point, as I reckon you've missed the best bits! Trevor to Llangollen is spectacular, and Llan is a nice little town too. And the Montgomery Canal from Frankton Junction down to Maesbury Marsh is also very special, not least because so few boats are allowed down there. To be honest, I find a lot of the Llangollen rather dull (all those long straigh bits over the peat bogs, for example), and reckon the Caldon, the lower Staffs and Worcester, and the South Oxford all beat it. But the top end and the Monty make it all worth while.

Thank you Jim... the only person to notice. I've fixed it! Elly