We agonized a little about how we should get to Liverpool for our National Insurance Number appointments.  We would have needed 3 trains from Crewe or drive to a further away station to reduce the number of train changes, but then we'd have no idea of what the station was like or what the parking situation would be.  With the first of our appointments being at 9.20am we decided in the end to leave at 7am and drive.  Our Tom Tom said the trip would take an hour but we figured if we allowed 2 hours (for peak hour traffic) we should get there in plenty of time.

What a surprise.  We had a dream run in and only encountered a little traffic when we got to the last 4 or 5 miles.  We were parked out the front at 8.15 and we hadn't left the marina until 7.10am.  Excellent!  We went for a walk in search of a cup of tea and eventually found a cafe.  It's not the nicest of areas where the Job Centre is, with all the shop windows being barred and some of the houses too.

We were at the door 10 minutes before the allotted time and out again an hour later.  The questions were simple, our 2 sets of passports and a single letter addressed to us from the insurers of nb PS were all the documentation they wanted.

So then we had the rest of the day at our leisure and we thoroughly enjoyed it.  First we headed a little further North to Toxteth Park, where Mick's father grew up.  What a tough upbringing it must have been on the Liverpool Docks.  We've been there before to see the teenie house where his family lived but thought we'd drive past again.

Then it was on to Midland Chandlers at Preston Brook for new front and back fenders.  Our rear fender was so flattened that the rudder extended beyond it.  Not good.  The front one had been sitting in an incorrect position for so long that it had a groove that kept it that way.  One of the marina fellows messed around with it and so did Mick.  He showed us on other boats how it should sit but the fender was having none of it.  We gave up.

Our next stop for the day was the Anderton boat lift.  We had a wander around the shop and along the tow path.  I also spent half an hour on the phone in the car to Vodaphone.  Goodness!  A friend had processed me an online application for a phone and we'd heard nothing more about it after the confirmation text that arrived that day (alas we didn't have the reference for online tracking).  I'd tried to get help online, I'd been into a Vodaphone store asking for help, I'd called them and asked for a call back but when it came it would recongnize my key selections!  This time I just sat on hold until I got to speak to someone.  They were no help at all but assured me that there appeared to be no application pending and no money would come out of my account.  I'll keep checking my bank account to make sure!

Based on that, we called in at Crewe on the way home this afternoon (see.... I said "home") and I just splashed out and bought the handset I wanted on a "pay as you go" arrangement.  It will be a relief to have a phone each and to be able to contact each other when we're apart.  It will also be great to be alerted to emails.  The shipping agent had emailed the other day and I didn't get the email until we returned to the boat.  Our stuff will arrive Wednesday... some time between 9am and 5pm... and we need to be here... but they can't be more specific about the time.

Tonight cooking dinner the cabin started steaming up.  I'm sitting here typing this blog entry so I've flung open the side hatch doors.  Next thing I know we have a visitor.  Jack.  I have a sneaking suspicion there'll be a few titbits passed out the hatch door tonight. :)

Today's offerings :
1.  It wasn't all bad near the Job Centre - stunning brick work
2. The not so pleasant view
3. Note the mens and ladies teacups (quality newspaper available to read)
4. The view from Charlecote St, Toxteth Park
5. The mighty Anderton boat lift
6. & 7. Jack 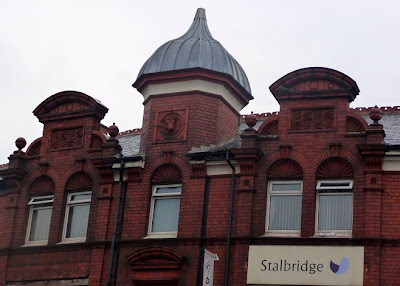 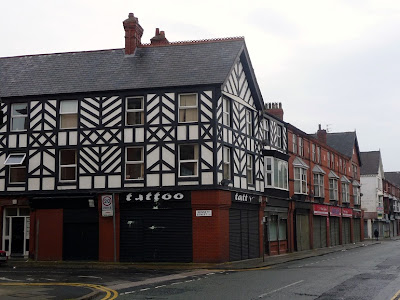 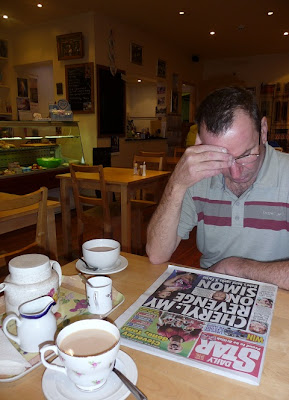 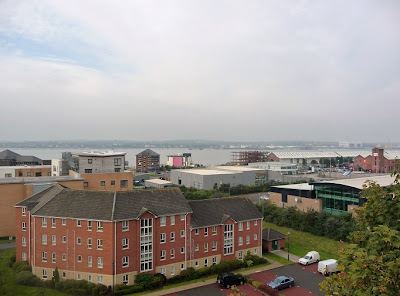 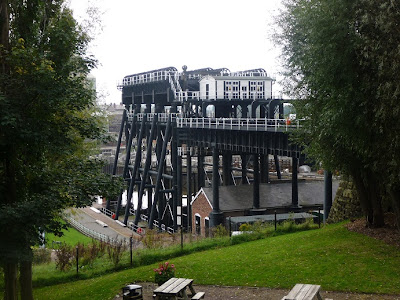 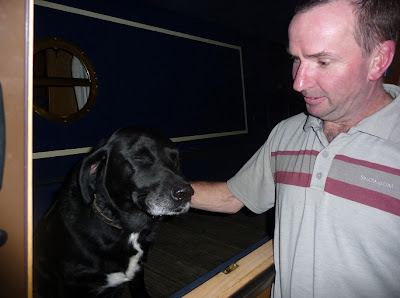 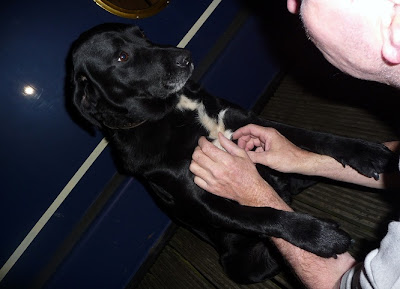