They arrived this morning, about 9.30.  Mick rushed off to help the courier put the boxes in a pile at the end of the jetty.  The timing wasn't fantastic, I was in the throes of battling the washing machine which had decided not to work any more.  The sky was looking a little grey so I left the washing machine to it's tantrum to gout and made a start on the boxes.  There is absolutely no space on a narrowboat to stack 10 packing boxes and the thought of them being rained on wasn't a pleasant one.

When I got out on the pontoon and saw Mick standing there talking to our "neighbour" Alan, with a tower of boxes beside them, I was filled with forboding at the thought of fitting that much stuff into the cupboards that already had so many things in them.  We had discussed this yesterday and decided that whatever didn't fit we'd choose the better stuff to keep and the rest would go to a charity shop.

One by one I cut open the boxes and slowly started finding homes for everything.  Once I'd emptied the box I'd reach out and put it on the roof and Mick would bring another one... between his discussions with Alan and the pair of them poring over a canal map.  When I'd upacked about 8 I asked him how many were left.  How could there possibly be another 5?!

I left the 2 boxes of shoes and clothes on the bed but when the other boxes were empty the place was in absolute chaos.  I tried really hard not to look around at it too much.  I just concentrated on picking up an item and finding it a home.  There was an awful lot of manipulating and repacking but eventually things started to look better.

Mick went off to Crewe to Argos... yes, again... and to B & Q (UK version of Bunnings) to knock of some more items from our purchase list.  It's still not finished.  How can that be?  We've done nothing but shopping since we got here.  Today he bought an electric kettle (£5.49 after realizing how silly we were using gas to boil the jug while we were hooked up to landline!), a weather station, a kitchen tidy bin (we had one but it was too big) and another plastic set of storage drawers.  I have 2 under the dinette table now and Mick’s going to put one in the rear cockpit.  We did want to buy a pair of “walkie talkies” but they didn’t have them in stock.  We’ll get them Friday morning.  We also got a new boat pole and plank.

When he got home he unpacked his box of tools at the same time I was doing the kitchen box.  We were like 2 kids in a candy store.  He was so excited to see his battery drill and it made my day to have a decent casserole dish again.  So easily pleased we are.  It was actually very nice to be surrounded by our own things….. things that were familiar to us.  And tonight, I’ll sleep with my own pillow! Bliss!!!

It took me 6 hours but much to my surprise we had only a small box of items for a charity shop and a box of stuff for the bin (mostly packaging).  We’ve actually managed to fit pretty much everything into the boat.  A miracle!

I had another go at the washing machine with no success so took the washing over to the marina laundry.  Tomorrow we’ll have to do something about that machine.  Another challenge.

Now we’re sitting here in our tiny living room watching a dvd called The Water Boatman.  I’d tried to buy these dvd’s when we were in Australia but couldn’t get them.  At the Anderton boat lift the other day there they were on the shelf, just arrived that day.  It’s a little surreal to watch places on the canals now.  We’ll be going there ourselves.

It’s actually been quite a tiring and difficult day.  In fact….. I might start a new blog entry on this topic. 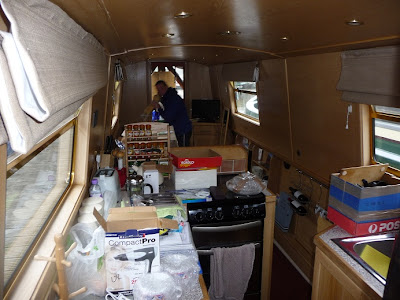 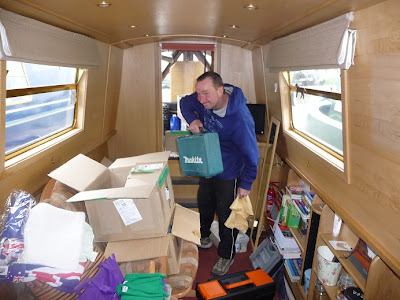 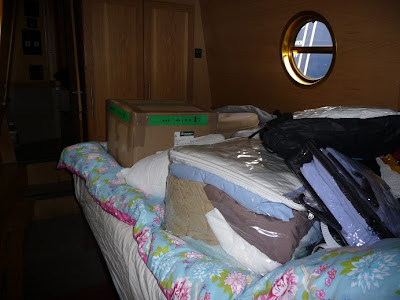