I experienced another "first" yesterday.  It was the first time I was inside our boat while it was inside a lock.  With just the two of us on board one is steering and the other is off the boat operating the lock.  Yesterday there was a volunteer lock keeper and he said to get onboard and he'll do the rest.  I went inside to get something and it was dark!

Yesterday while going for a walk around Fradley Junction I noticed a motor biker get off his bike and wander over to a lock while nobody was near it.  He peered in, took hold of the spindle that you put your windlass on and gave the spindle a shake, then a push and a pull.  Hmmm.... it didn't move.  Then he looked at the lock beam and gave that a shove.  Nothing happened.  He pushed a bit harder, went around to the other side of it and pushed it the other way.  Still nothing.  I almost took sympathy and went to explain how it all worked but thought he might not appreciate the fact that I'd witnessed his curiosity.  The incident reminded me that a couple of times someone has asked me by email about locks.  What does it look like inside?  How do they work?  I thought I'd written about them so today checked on the blog.  The rest below was sitting there as a draft posting.  Not much use there is it!

Locks must surely be the most interesting (or scary) part of narrowboating for visitors and gongoozlers (they're the folk that lurk around the canals watching boats go by).  They are basically like a giant bath tub with gates at each end.  You either fill or empty the lock so the water inside is the same level as the canal where you are.  You open the gate at your end of the lock and drive the boat in, closing the gate behind.  Then you either fill or empty the lock so the water level is the same as the canal in the direction you're heading, then open the other gate and drive out.  There are underwater paddles in the gate, or in the ground, that you open by winding up the paddle using a windlass (or sometimes called a "lock key").

One of the worries of using locks is the "cill".  It's a ledge of concrete the forms the end of the lock chamber below the gate.  It protrudes a little into the lock and if you have your boat too far back as the lock is emptying you can catch the back of the boat on this ledge.  Many a boat has been sunk when this happens.  I found several sites showing these same tragic photos.  There is always a marker on top of the lock edge showing where the cill is. 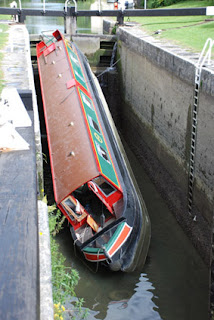 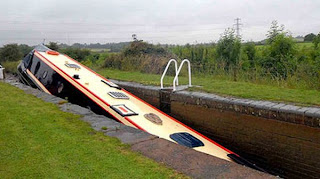 I'll never forget our first attempt at a lock when we hired in 2007.  There were none near the hire base so we'd watched a video to learn what to do!  So there we were at Stoke Bruerne, having negotiated the Blisworth Tunnel the afternoon before.  We were itching to get going but ahead were seven locks.  We wanted to share them with someone who knew what they were doing.  So we waited.... and waited... but eventually we'd had enough of the waiting and I saw a working boat looking like they were making preparations to move.  I crossed the lock and asked them if they were going to be heading down the locks.  Yes, they were, but not for at least another hour.  The fellow said we were more than welcome to come down with him and he'd help us out. We went back to the hire boat and discussed what to do.  We decided we were being silly worrying about it and we should just go ahead.  When the steerer of the working boat saw we were going to give it a go ourselves he walked down to the first lock to help.  What a lovely fellow he was.


Animation of how a lock works

Photos :
1. Slimy walls inside a lock
2. Duplicated locks on Heartbreak Hill
3. A ground paddle - spindle on the right to slot your windlass onto
4. Lock beam - balanced to make opening the gate easiest (in theory!)
5. Gate paddle
6. Inside a lock facing downhill (usually a pair of gates)
7. Inside a lock facing uphill (usually a single gate) - you can see the cill halfway up
8. Cill warning
9. Looking down to the cill
10. Narrow ledge to walk across the gate to the other side
11. -17. More lock photos 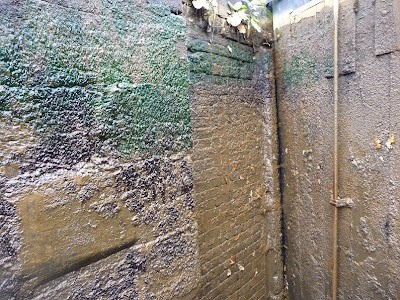 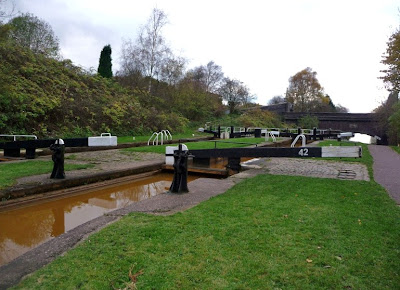 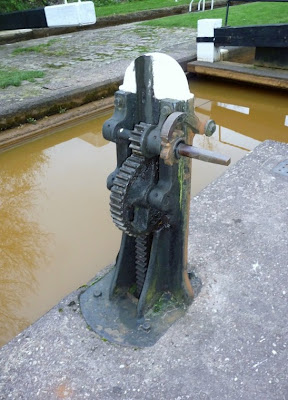 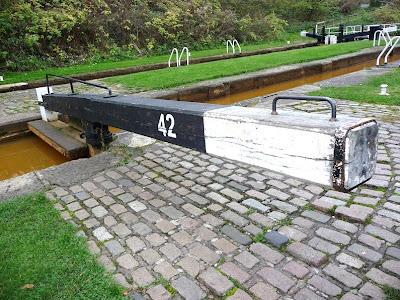 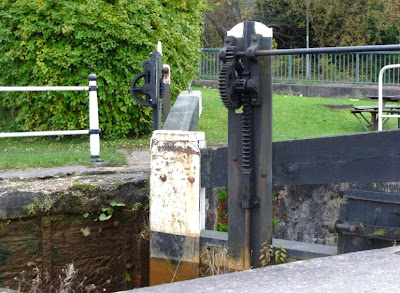 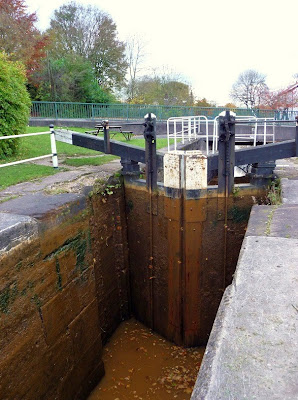 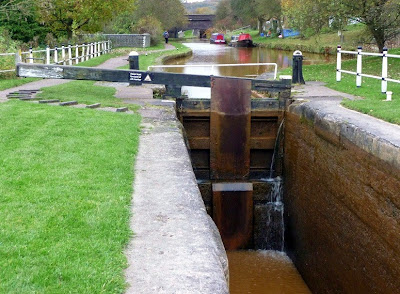 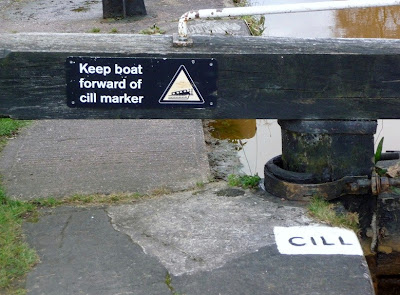 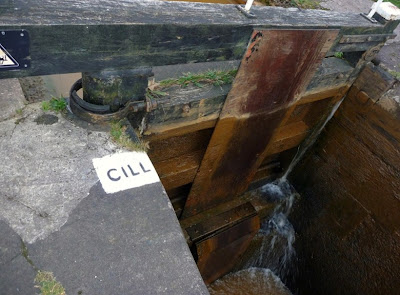 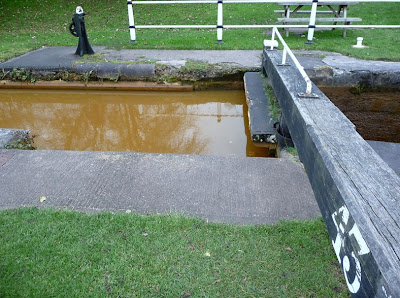 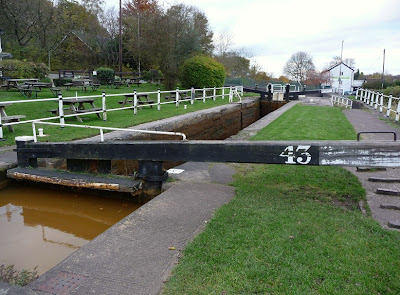 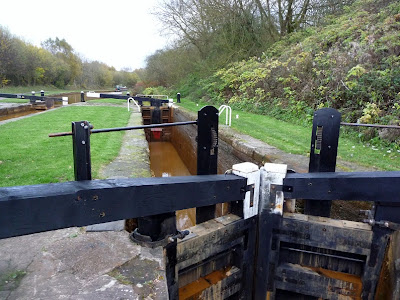 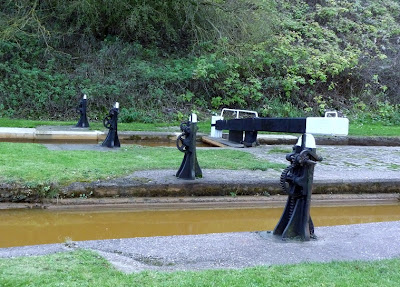 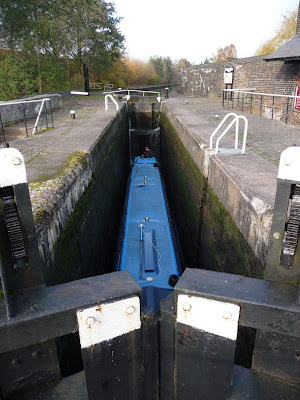 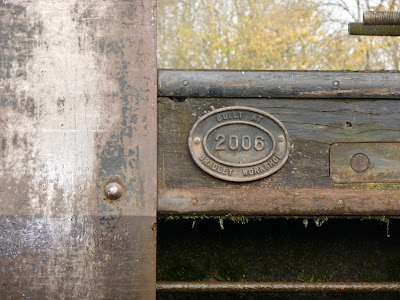 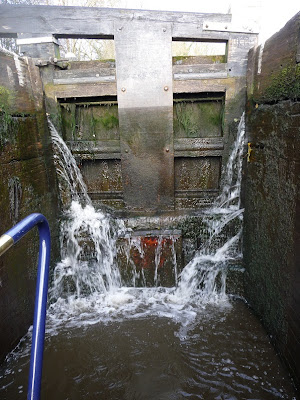 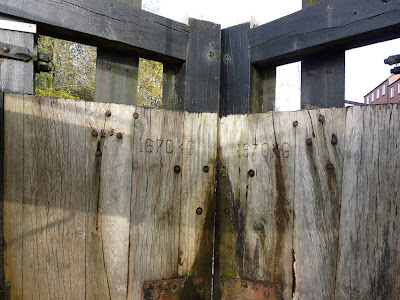