This morning was so mild, still and quiet we made a spur of the moment decision to move on early.  I went down the towpath to nb Winton's Folly to arrange to meet up with them later today or tomorrow. They wanted to visit the church fete which didn't start until 11am.

Late last night a boat came past with their headlight shining bright through our bow doors - first heading in the direction of the tunnel and then coming back towards the locks.  I knew that after 10pm at night they wouldn't be heading down the locks and when we heard them start to reverse we knew the only places they could be mooring up near the top lock were the water point or the lock landing.

When we got up this morning we discovered which option they'd chosen.... the water point.... and we needed water.  By the time we were ready to leave it was after 9am so we figured they were being a little unfair to still be sitting there.  I walked towards the lock to see what we could do.  I passed the fellow who skippered one of the trip boats and we had a little chat.  It turns out he was the one who helped us through our very first lock 6 years ago.... the same lock we were about to go down.  He asked where I was heading and when I told him about our water dilemma he suggested knocking on their door and saying we'd need to butty up to them to get water.  They shouldn't have moored there in the first place and they certainly shouldn't still be there now.

I knocked on their hatch and a handful of kids in pyjamas raced out followed by mum who said "we're just about to get water so when we're finished you can use the tap".  Their hose was in fact connected to the tap but it was one that collapses flat with no water flow and there was definitely no water through it.  I said that we'd waited a while this morning but seeing they hadn't moved on, perhaps we'd butty up and put our hose across their bow - there were two taps.  She sort of agreed, then dad came out saying that there were other water points down the locks that we could use instead.  I told him we needed water before the locks to get our washing started.  There wasn't much more he could say so off I went.

As I crossed back over the lock to go back to the boat, the trip boat skipper was coming the other way.  He said "I'm going to give you a hand again... 6 years later.  They shouldn't be there. I'll have a word with them".  I don't know what happened from there but as we came around the bend towards the water point a few minutes later, the moored boat had put their hose away, perhaps they didn't need water after all, and the fellow waved us over to butty up.  We did the job as quickly as possible and shared the lock with a boat that was coming our way.

It was quite warm winding lock paddles in the sun and I decided it was time I got brave about steering the boat into locks so Mick could share the work.  I'd been happily doing so in the weeks before we headed into the marina but got nervous about it again with the double locks.  I kept worrying I'd scratch the boat next to us.  At the third lock we shared with a friendly couple out for the summer on their boat.  When I told him my dilemma he said to steer into the remaining locks.  He didn't mind at all.  It really wasn't so bad and at the last lock where he had to go in ahead of me I found it was actually easier with another boat already in the lock.  Amazing, the motivation from hard work in the beating sun!

We filled the diesel tank at Yardley Gobion and had our lunch on the run.  We didn't expect so many flies in England!  We were surrounded by them while eating lunch.

Now we're moored at Cosgrove and the church bells have been ringing on and off this afternoon.  Seems there was a wedding.  What a lovely sound it is.  It's lovely sitting at the dinette working with the side hatch doors wide open.  Sure beats working in an office!

Today's selection :
1. Lockside cottage selling free range eggs - see Mick bottom right buying some
2. Fields of canola in flower
3. Pretty pictures in every direction today
4. Heading under Solomon's Bridge
5. And from the other side 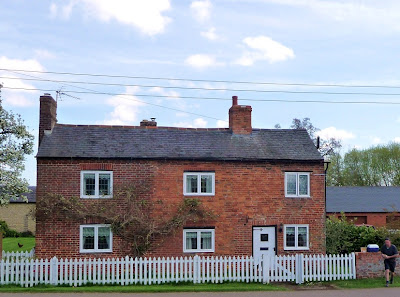 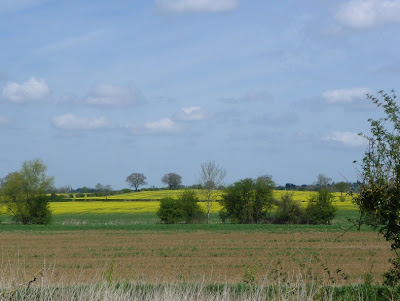 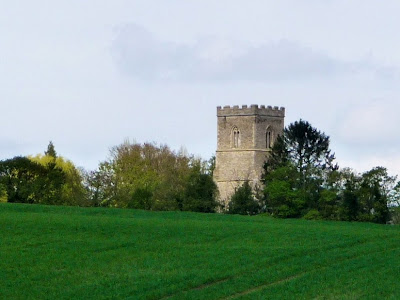 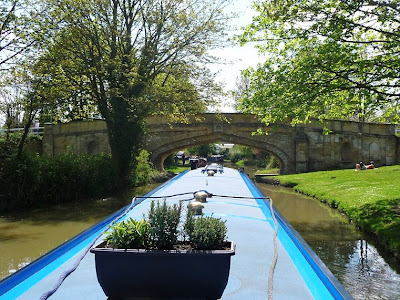 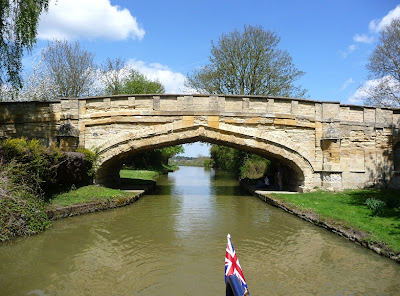 I hope you waved at Briar Rose as you came past Thrupp Wharf!

We were moored not far behind you at Stoke Bruerne and were very sad to have missed you when we got to the boat on Friday.

I hope that our paths cross soon - it would be great to meet you :-)

Adam, we're passing by again today - in the opposite direction. Will look out for her! Elly

Sue, we saw Indigo Dream the other day. I did take a pic but it looked like nobody was around. Will look out for you!
Elly