A bit of excitement

We planned a short day today but that's not quite how it turned out.  We headed out of the little Whitchurch Arm in glorious sunshine.  I just walked along the towpath as we first had to head off in the wrong direction as the entry into the little arm is on a very sharp angle.  There's a winding (turning) hole just beyond so Mick had his first go at turning in a canalside winding hole.  So far they've all been larger concrete edged basins at the end of an arm.  It was still a reasonable size and he handled it easily.  As he came back around the bend to the lift bridge where I was waiting my heart did a little flip flop at the sight of nb Parisien Star.  She's our home!  I don't know why this day is any different to those we've had so far but it really hit me today.  She looked so lovely against the green of the trees and the sun was shining.  It's been a bit hard to imagine that this is our life for the next year or so.  I've always been a bit sentimental about our homes and I guess this one will be no different.

I walked along the towpath to the next bridge and stepped on board there.  It's so much easier than Mick getting the boat into the bank for me to jump aboard.  It was only a short cruise to Grindley Brook where we stopped on the very last mooring before the water points but we could still reach our hose to the tap.  We churned out 2 loads of washing while we were there and I got in a couple of hours work at the same time.  Mick went out to the towpath and painted our new plank and pole. I'm glad to have them out from under our feet inside!  After lunch we refilled the water tank and made a start on the locks.

First there's a staircase of 3 (where one lock joins straight into the next without a little pound of water in between).  I decided it was time I had a go at steering the boat into a lock as I've avoided doing so until now.  Just as the boat peeked out from the trees before the lock the wind gave the bow a push and I was off course.  I like having a bow thruster! (separate little propellor that can push the front of the boat left or right).

All was well down the staircase and Mick tied the bow of the boat up on the sharp curve of canal between the bottom of the staircase and the next lock and raced off without looking back.  Thanks Mick!  The bow was tied in so tight on the bend that the stern was sticking out into the canal and there wasn't much I could do about it because of the curved bank.  The flow of water coming down kept trying to push the stern further from the bank but he didn't even look back!  Eventually he returned to untie the boat for the first lock.

A lady coming up the 3 locks had rushed up ahead to Mick asking him to wait as she was on her own.  We tied the boat up after the first lock and waited, thinking she was about to come into the next lock.  It turns out that she had opened the bottom gate of every lock so she could just come up from one to the next.  We figured we'd just wait for her but when I turned back to nb PS she was on an obvious tilt and the rope we'd tied her with was slack.  With all the bottom gates of the locks open, the water from the pound we were in was slowly flowing through the locks.  Our home was sitting on an angle on the bottom of the canal.

By now the lady had a couple of boats queuing behind her and they walked up to see what was going on.  We emptied a lock full of water from the one we'd come from and nb Parisien Star was afloat again.  There was then a bit of confusion about what to do next.  If we went down the next lock would we make it worse for the boat coming up?  If we let more water down from above would we cause a problem at the staircase locks? The lady had tootled off on her merry way and was in the staircase with the help of the lock keeper.  I went and asked him what we should do and he came down to investigate.  He said after about 10 minutes the levels would correct themselves as the overflow from the one before would refill the next etc.  He was right of course and after a chat with the other boaters we started off again.  I stayed back at the last lock to give them a hand as we'd decided to moor up below the last of the locks.  The queue of boats was coming up the hill so they were the ones delayed.

The last boat in the queue called out that he read my blog so although I have no idea of their names or even the boat name, hello to you!

We tied up on the straight stretch of canal after all the locks and the day was all but over... for us anyway.  We are often amazed how late in the day we see boats going past but we like to have plenty of time to cook dinner, unwind, and settle in.  We've decided we'll just cruise 2-3 hours on the days we move so then we'll be moored up before the hire boats start looking for a place to stop, and I'll have time for work.  Today didn't quite work out that way with the muddling about at the locks but we were still tied up at 4.30pm.

Mick had his first attempt at tuning the tv and the channel selection was pretty dismal.  He decided we should pull the boat forward so we weren't under a big tree.  Another go at tuning the tv and the result was even worse!  We gave up and decided it would be a dvd tonight.  We have "Rivers" which is hosted by Griff Rhys Jones.  We saw it quite a while ago but decided to buy it to watch on non-tv nights.  We like "Cadbury" the chocolate labrador!

Today - nearly all about nb Parisien Star
1. Mick has discovered the bar code scanner on my ipad!
2. The winding hole
3. Here she comes around the bend
4. I love the sound of the water lapping around the boat - so peaceful
5. About to go through the lift bridge
6. Relaxed?
7. Looks like it!
8. Mick liked this cute little cottage 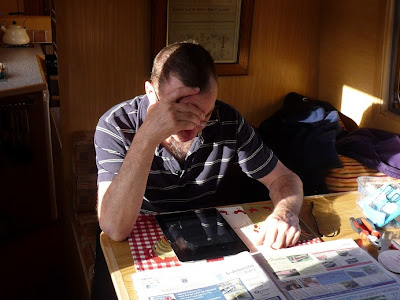 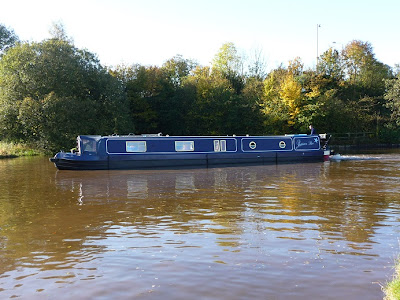 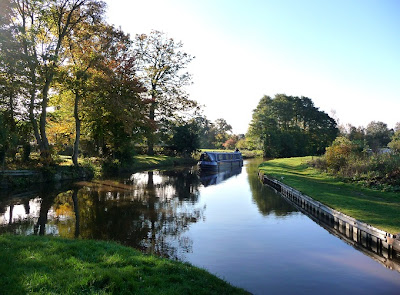 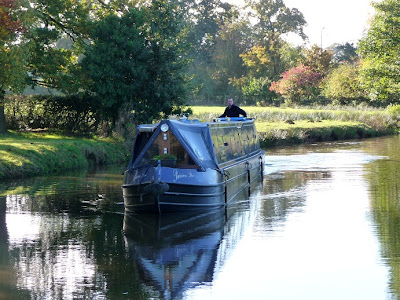 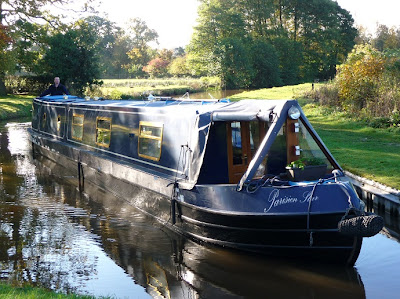 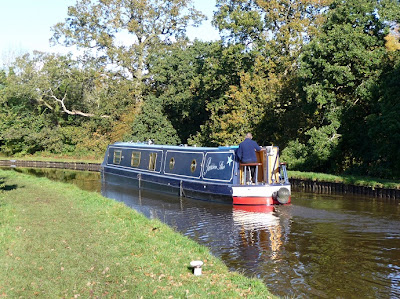 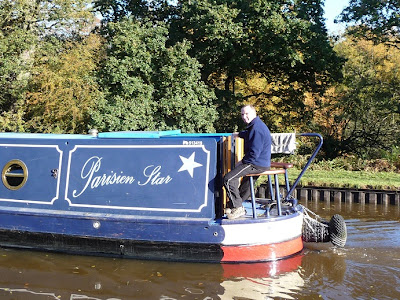 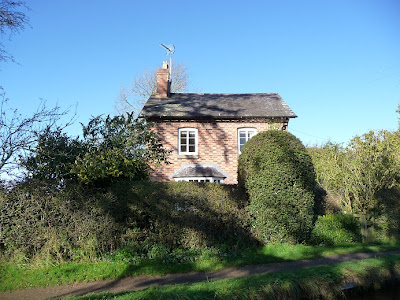 Hello Both.
Now i'm new to trying to work out your Blog.I have just read your blog dated Tuesday 30th Oct. Yet here I am reading it at 13.02 on the 30th Oct.? My wife and I nearly bought Chemistry farm house and Barn. They were the buildings in your photo to the left abouve the winding hole of the Whitchurch Arm, oh about 6 years ago.Now I wish we had.You seem to be getting the hang of it. I sold my boat recently. So I find myself, Boat less for the first time in 18 years. Happy Locks, Bryan.

Hello again. You mention lots of wiches , Nantwitch Middlewitch,Northwitch.
The witch means Salt. They were all Roman settlements and salt was mined there. Salt was more important than gold to the Romans. In fact, soldiers were paid in salt.

Hi Bryan,
Thanks for the comments. The date thing is a mystery. Someone pointed out to me early in our travels that I was still on Oz time but it tells me I'm on the right setting now.
We didn't know about the salt til someone emailed us the other day about it. Why was it so valuable?
Elly

That person who reads your blog was our friend Simon. He and Sally are on Festina Lente, share boat. Had lunch with them yesterday. Simon says if ur ever on the K and A let them know. If has bad internet so couldn't post comment
Fi