Today we are officially living aboard.  We packed up our belongings from the cottage where we've been staying and muddled around trying to find space for them on the boat.  I don't know if it was the thought of 10 boxes of stuff arriving next Wednesday and nowhere to put it all, or if it was the realization that this is our life now, or the overwhelming number of things we have to learn about or what it was but I just felt sick to my stomach for about half the day.

It was the first real opportunity we'd had to go around trying to work out how things operate.  We turned on the central heating, we tried to stop the beeping of the gas/co alarm, we tried flushing the loo, we tried, and tried to get the "landline" power working (had to go and get assistance), we fumbled and bumbled about trying to get the tv working.  We bought a little 19" flatscreen from Tesco and it works a treat... eventually.  Then we took off the antenna that was on a pole at the front of the boat and hooked up the fancy "omni something" aerial we bought the other day.  It took a while but we eventually got that working too.

I can't count how many times today we've had to flip frantically through the enormous folder of information that makes up our "handbook".  We've had a noisy toilet, fogged up windows, the washing machine going, the central heating timer to sort out.  We've really not had anyone to show us how to use anything and I think the folk at the marina are sick and tired of one of us appearing at the door asking about something else.

At lunch time we determined another problem.  Our belongings haven't yet arrived and although we have cutlery and a few glasses, plus 2 coffee mugs we bought, we don't have a single bowl or plate.  I had heated up some soup in a Pyrex jug that had been left on the boat and ended up having to eat my soup from the jug.  Mick had his from a glass!  Our toast was served on a paper napkin.  Another visit to Argos for a dinner set, a mirror, and a couple of cheap plastic storage units - one for under the dinette and the other for in the rear "cockpit".  At least we could eat our dinner from proper crockery.

Now we are sitting here, chairs squeezed tight side by side so we can both face the tv, leaping up to investigate every noise.  Why do I have a feeling it's going to be a long night.

Photos :
1. Yesterday - waiting for Mick to empty the lock
2. Yesterday - a heron on the canal side
3. A lovely building we've passed each day driving to the marina
4. Our view tonight 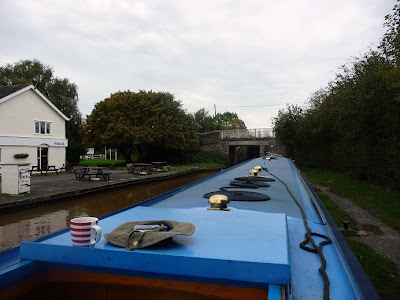 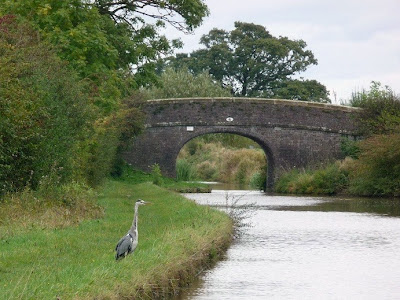 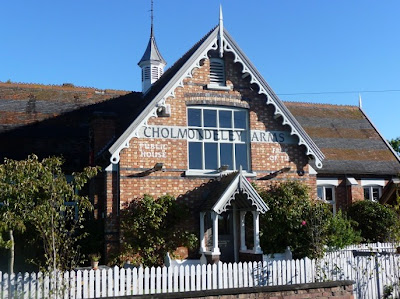 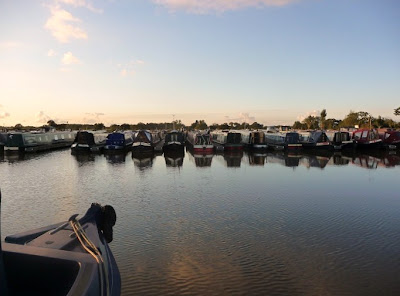 Enjoy the adventure Elly! you can always 'take' to the charity shops if there isn't enough room for your TEN cases of chattels :-)

Hi there. Perhaps you've been a bit hasty in taking virtually everything off to a charity shop before taking proper stock of your requirements re dining etc. Then you'd have had some plates to eat off! Lol

Reading this blog took me back to the day we sat under a bridge in the rain loading our posessions onto MR and realised we'd STILL got double the amount of stuff we could fit - freezing cold and trying to stop the cat escaping and G and I having the worst fight of our lives. Sick doesn't begin to get near it. Then the sewage tank overflowed through my clothes (twice in 2 weeks).
But it gets better and better as you get to know your boat. We're still here nearly 5 years later and still loving it.

Ah "the learning curve" we remember it well! Take "onboard" all the advice you can & don't be afraid to ask. If you need an engineer, ask for a recommendation from another boater.
As for the old school vs the bow thruster, well, only inexperienced boaters will use it to get away from the canal bank. Even if they don't care, or know about erosion, the BT might suck crud, reeds & all sorts into it! (Not a good idea) Always push off from the front & wait till the bow is well away from the edge. Most times it won't be necessary to use it then anyway.
Comes in great for turning, getting in & out of marinas, & getting into the side when mooring up. Oh & for the odd avoidance tactic when a narrowboat is out of control heading towards you!
There's one advantage to cruising at this time of year though, there won't be many boats on the move!
Good luck

Funnily enough we did take the couple of plates left on the boat to the charity shop! We aren't really fussed if we have more to take after we have unpacked. The things we shipped were mostly extras from when our house was a weekender. It would have gone to a charity shop back home.

Jill, I don't know why someone else's tale of woe would make me feel better but it did. Maybe it's just knowing someone else understands. We will be fine once we are sorted out.