When we moored up last night we had a couple of attempts at it.  There was a bit of a curve in the bank so at first we had the centre of the boat out from the canal bank but there was something under the water and we couldn't get the bow in properly.  We decided we didn't want to be there - we pulled the boat back to a straighter section where it was also difficult to get in close due to some sort of obstruction underwater.  The third try - a bit further back again we got in better but once we were back on board and walking around we discovered we were still scraping against something.  It was dark by the time we realized it so we gave up and stayed there with Mick fretting about the blacking.  Oh well.

We managed to get everything working, and we're extremely grateful to Roger for his email advice.  We feel so much better about managing the electrical system now.  By the time we went to bed we'd only run the batteries down to 75%.  I'm guessing we could moor up for a couple of days and not have to start the engine if we were careful.

We were really tired after such a momentous day and both slept well.  It still felt not quite real that this was our life now.  I'm planning on starting work tomorrow so that will give us some sort of routine.

When it came time to head off this morning we were walking up and down changing our minds about what we should do first... untie this... no, untie that one... stand on the bank... no wait, get on the boat... hold this rope... no, give it to me.... oh my goodness, surely we'll find some sort of method!

Not too far from our overnight mooring was the right hand turn into the Llangollen Canal.  I could see on our map that there were 4 locks just around the bend but when we got there the first of them was JUST AROUND THE BEND.  And worse, there was a boat coming the other way, also going to turn in there.  Panic... what to do... look at the fellow standing on the back of the other boat...  he's just looking at us.... eventually decide he's marginally closer and wave him on in front of us and... we turned the corner.  There's only enough space for 2 boats to moor around the corner so we messed about a bit trying to get in behind them.  We are definitely not good at maneuvering into small spaces.

The folk in front were very friendly and one of the women even stayed back to help me with the first lock.  Lovely.  The Llangollen was a new experience.  The current of the water took some getting used to.  The first 4 locks were ok, especially with a helpful lockie, but the few following were harder work to get into with the rush of water coming down the channel from one side.  There was a bit of bumping and scraping.  Never mind.

We moored up to have our lunch at a familiar place.  We'd driven many many times through Burland and across the canal in the weeks before leaving the marina.  We had taken note of the small convenience store by the bridge and decided it was a good opportunity for a loaf of bread and a carton of milk. Now we were there from a whole new perspective.  We tested out our new 2 way radios.  They work from an amazing distance.  Good volume control on them too as my hearing is terrible.  Maybe there'll be a little less hand waving and shouting now.

We were aiming for Wrenbury for tonight and we've made it.  It's another place we've been before - just over a week ago when we had dinner at the Dusty Miller.  As we approached the first couple of moored up boats we asked a boat coming the other way how close we were to the next bridge.  They pointed to a mooring space and said "you should take this one" so we headed for the vacant space.  The boat moored before our space was nb Epiphany!  We'd spied her once before up on hardstanding at Swanley Marina and here she was again.  I've been following Fiona's blog for a good few years so it was lovely to finally meet her and John.  We finished our packing up and went back to sit with them for a drink and a chat.  Glad to meet you both!

Tonight we had dinner at the Cotton Arms.  The Sunday roast was such an enormous serve we could have shared one.  We chatted with the folk at the next table and patted their labrador, Joe.  Joe got to take home our leftovers!

I started typing this blog entry before we went to dinner and now that I'm finishing it (having finally got internet reception) I see Fiona has posted about our meeting too.  How funny to think I've been sitting here typing while she's in the boat behind doing the same thing! 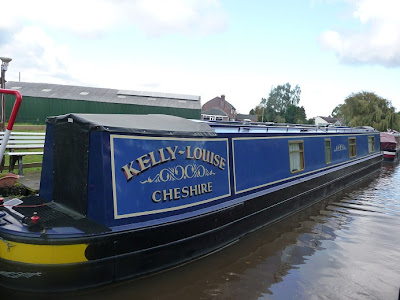 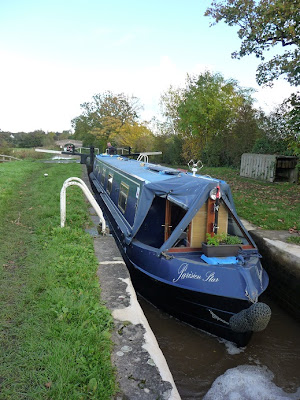 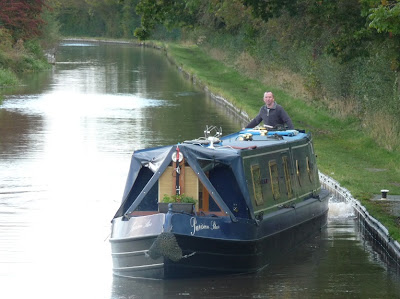 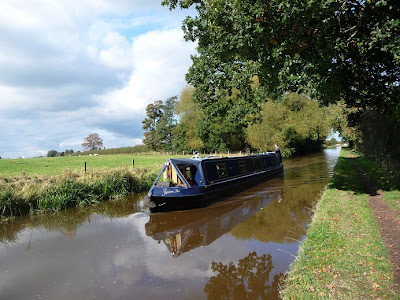 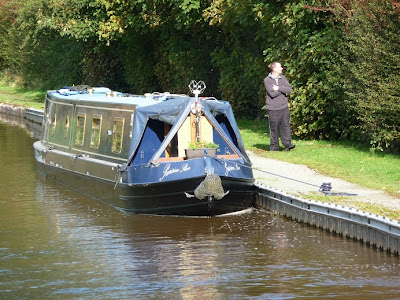 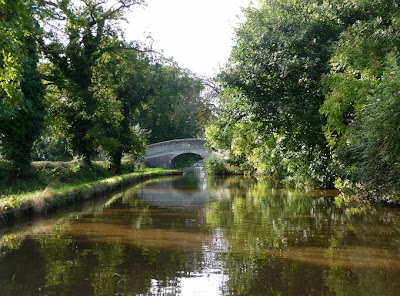 Ah now that would be the 'Shroppie Shelf' making you bump below the waterline.

A lot of the Shroppie has this and it can be overcome.

You can get some of those fenders that you can actually drop under the water between your boat and the shelf..

Or/and you can get some wheels like these we use..

You can get them from screwfix here..

You will find you might need all sorts of bits and bobs in your first year!

The 'golden rule' is not to let the battery level drop below 50% or you start to significantly reduce the life of the batteries. Unless it's a very large bank I doubt you will get another 2 days energy out of them and stay above 50%.
Regards
Tom

Good luck on your travels - hope the weather stays reasonably OK for you! What happened with the washing machine, by the way - I thought someone was coming to look at it on Monday?
Have fun!

Thank you all... aren't you just a fountain of good advice. Thank goodness for writing a blog!
Peter, see today's blog entry. Thanks for the reminder.
Elly

Aldi sell the tyres that Sue recommended for £9.99, batteries should never go below 50%, ours never go below 80%. You will need to run your engine for 3 - 4 hours a day even if you're not moving just to re-charge them.
regards
Yvonne

Thanks Yvonne! We'll look out for them.
Tom & Yvonne, we've charged up the batteries and will make sure we continue to do so. Oh, there's so much to learn!!
Elly