We decided we'd move on today - we had looked at the weather forecast and it appeared that Tuesday was the pick of the days.  Wednesday and Thursday look like they'll be rainy so we decided to head for the Grindley Brook locks.  If the weather wasn't kind to us we'd moor up before the 6 locks at Grindley Brook and if it was ok we'd tackle those locks and moor up above them.

It wasn't the best of starts.  We were moored at Wrenbury just a few boats down from the lift bridge outside the Dusty Miller pub.  Mick saw a boat about to pass us and heading for the bridge so he got it in his head that we should go NOW as the bridge would be up.  When Mick decides to do something, we have to do it immediately.  I have no idea what the rush was all of a sudden.  There was a mad scramble to put on shoes, coats etc and untie the boat.  When I'd looked at the canal guide the night before I figured I'd just walk up to the bridge to open it for him when the time came to go.  We'd also been told that this one bridge we'd need a BW (British Water) key rather than a windlass.  (For our non-boaty readers, here's what a windlass looks like : Click).

In the rushing around trying to get going (and Mick's a bit under the weather with a cold... read that as "grumpy") he was yelling to me to untie the boat and then yelling at me to get on board... so I did!  So now I couldn't go open the lift bridge, but I could see the bridge was open and the lady from the boat ahead, who had opened the bridge, was watching us heading towards them.  She watched for a few seconds and then turned around and closed the bridge!  They were the first boat to head off that way for the morning and I think she wanted to make sure they stayed first in the traffic for the locks to come.

So now we were almost at the bridge that began closing before our eyes.  I grabbed my windlass as Mick veered toward the bank to let me off although now the boat was at a crazy angle.  No sooner had I landed on the ground and I realized I needed a key, not the windlass.  I called out to the lady (who was conveniently gazing down the canal in the opposite direction waiting for the bridge to close so she could go back to her boat) that I'd grabbed the windlass instead of key and she pretended she'd just noticed us.  She grudgingly opened the bridge again... saying she hadn't seen us coming...  but obviously wasn't happy about it.  She had seen us coming, there was no way she couldn't have noticed as we were in the middle of the canal and on the move while she was still looking at us!   nb PS and Mick were being buffeted by the wind and struggling to get a good line up to go through the bridge.  The lady looked even more annoyed at his not too elegant attempt.

We were on our way but it took a little while for us both to calm down.  He was annoyed at me for obeying his yelled instruction to get on the boat... when I should have been walking to the bridge!  I was annoyed at him for making us rush for no reason.  I think we learned a good lesson.  We're not going to rush off like that again.  We could have waited until they'd gone and done that lift bridge at our leisure and that's what will happen next time.

By the time we reached the first lock all was well on nb Parisien Star.  We're getting a bit better at stopping for a lock.  Mick still tends to go a bit too fast letting me off and my hands are really sore from hurriedly trying to tie the boat up but the process goes relatively smoothly now.  We did the first few locks which were all in our favour as we'd passed a boat heading out of the first one.  Hmmm... now I see why the lady was in such a state about not being first out of the gate.... it does make it easier.  We tied up for lunch just before the first of the Grindley Brook locks and she and her husband passed us while we had our lunch.   There's enough boats heading in both directions here that it really doesn't matter much about rushing off to be first.

A boat came from the direction of the locks just as we were preparing to head off again.  We breezed through the first three and then tied up so I could go ahead and find out how the staircase worked.  The boat at the previous lock had told us there was a lock keeper in attendance.  The lock keeper was too busy chatting to someone to take much notice but he did signal to say we should come into the bottom lock.  He pretty much left me to it so I was hoping I was doing everything in the right order.  By the time we got to the top section he ambled over to wind a paddle or two.

We filled with water at the top of the locks and have now moored just a little further along.  I have a fabulous internet signal which is nice after struggling with it while moored at Wrenbury.  We had no tv reception the first night at Wrenbury but pulled the boat back one space after nb Epiphany moved on and then we had a reasonable signal.  Tonight we've got nothing again but we're not too fussed.

I worked on the move today as there were fairly long stretches with no locks.  Once we moored up I had another couple of hours while Mick sorted everything and went down to the lockside store for milk and bread.

Photos :
1. Gorgeous church at Wrenbury
2. Church window
3. Set into the floor of the church
4. Church organ (for mum)
5. House in Wrenbury
6. Another house in Wrenbury
7. Our mooring in Wrenbury (5th from the front)
8.  nb Parisien Star flying her Aussie flag 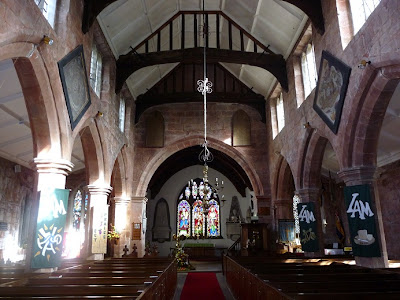 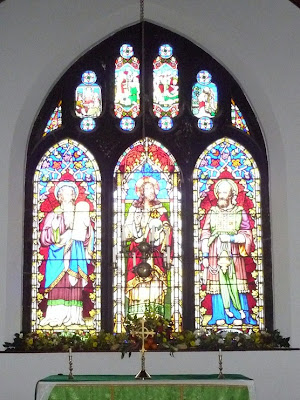 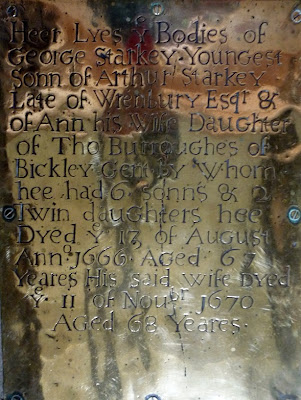 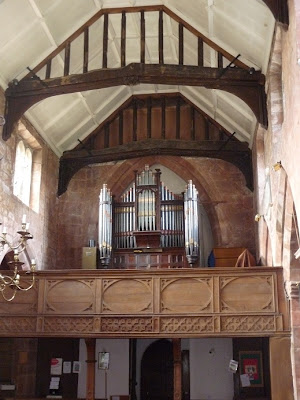 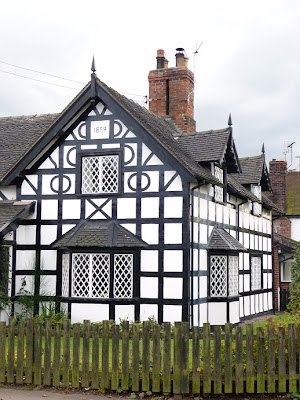 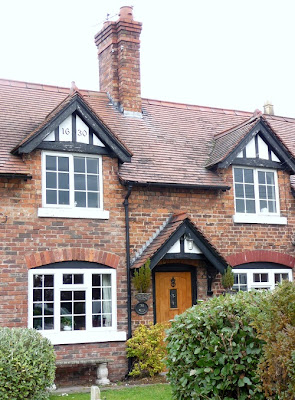 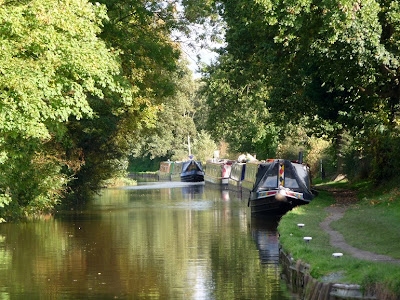 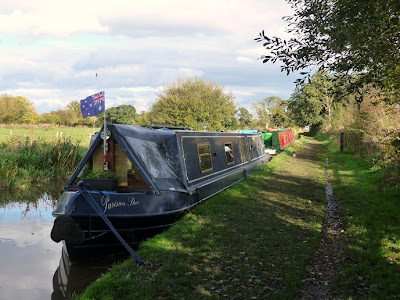 Elly,
They probably saw the flag and didn't want to be associated with convicts :-)