We didn't get up until 8am which is a real sleep in for us!  There was no hurry as we only planned a short cruise today to reach the little Whitchurch Arm.  We had a leisurely breakfast and off we went.  The washing machine was going (after yesterday's disaster) and we were rugged up at the back of the boat.  Gee it was cold, getting down to zero overnight and leaving frosty patches in the shade of the hedges.

The cold here seems to feel worse, it just goes straight through your clothes.  Today was windy as well and that made it worse still.  It was what I would think of as an average Winter's day at home.  Frosty in the morning and really chilly but then a stunning sunny day.  We had our coats on the whole day - more because of the wind than the air temperature.

We pressed on beyond our usual lunch time to try and reach the moorings.  There were 2 lift bridges shortly before reaching Whitchurch and a boat right behind us.  I jumped off to open the first of the bridges and waited for the other boat to go through before closing it.  They said to me as they passed under the bridge "We'll get the next one".  Sounded good to me.

When they reached the mooring space before the next bridge we started to wonder what they were doing.  They were both standing at the stern and nobody seemed to be making motions to get off as they slowed in towards the bank.  Next thing they both jumped off with the Mr hauling on his centre rope from the back of the boat.  Mrs wandered blithely on to open the bridge while their boat started veering out to the middle of the canal.  He had the stern in... sort of... but the bow was blowing out further and further until they were right across the canal sideways.

We felt so sorry for him as he struggled with the boat.  It was so windy!  But, he wasn't standing in line with the middle of the boat so tugging backwards frantically at the centre rope wasn't pulling the bow back very effectively.  We had no choice but to wait for him to go through as he was entirely obstructing the canal.  It was too windy to expect to lurk in the middle of the canal waiting so we pulled in.  Once he got onboard and started heading through the bridge we headed off too.  Right after the bridge Mr pulled over again to wait for Mrs.  Oh my goodness, the same charade again!  He did the exact same thing again with us stuck midway through the bridge with nowhere to go.  Luckily there is a winding hole (that's a widened section that allows you to turn around) right after the bridge so after waiting a while to see if he'd get control of his boat Mick nudged forward and managed to get around him.  It was a private boat so they were either as "green" as we are or they're borrowing someone else's boat.  It only took us a day or two to be able to control the boat from the bank.  Something the instructor who took us out on our first day said has stuck with me.  If you have your bow tied up you can use the propeller and rudder to get the stern in but it won't work the other way round.

We made the very narrow turn into the Whitchurch Arm, winded (turned) at the winding hole and moored up on a lovely sunny straight stretch just back from the junction.  After lunch we walked into town to have a look around and buy a couple of things we needed.  What an enjoyable afternoon it was.  When we got back I sat down to sort out my internet (that's why yesterday's blog was late) with the voucher we got at Tesco.  Mick went off to the junction with a windlass hoping to see a boat coming through that he could open the lift bridge for.  He came back rather disappointed a little while later.  No boats.  He did take a couple of nice photos though.

Here's what we saw today :
1. Our mooring on the Prees Branch last night
2. A very pretty bridge side cottage
3. I wonder what these little doors are for.  We see them on bridges all the time.
4. Look at the autumn colour!
5. Perhaps this boat had an Aussie owner?
6. Gorgeous building in Whitchurch
7. And another one
8. We bumped into this colourful fellow today
9. Tonight's mooring 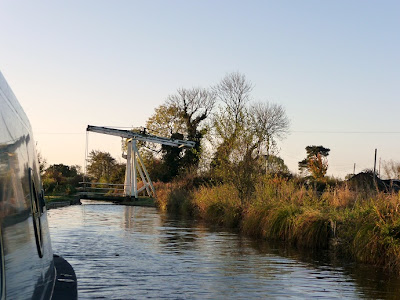 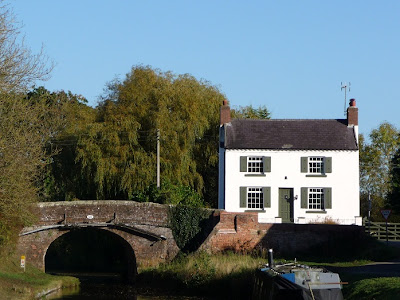 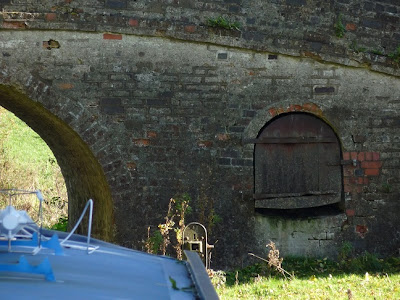 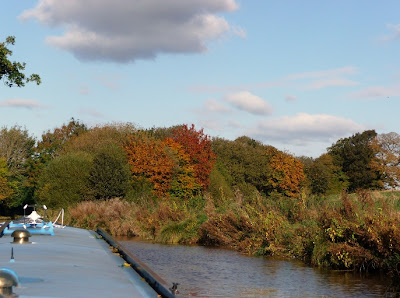 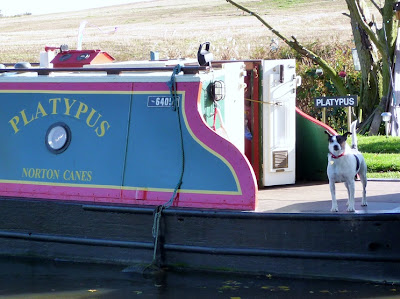 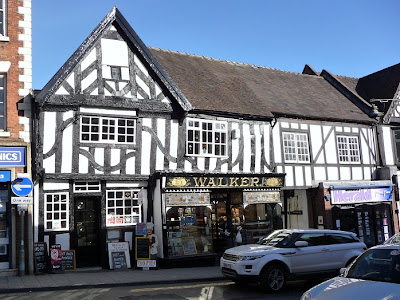 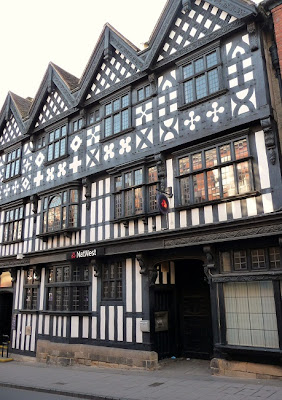 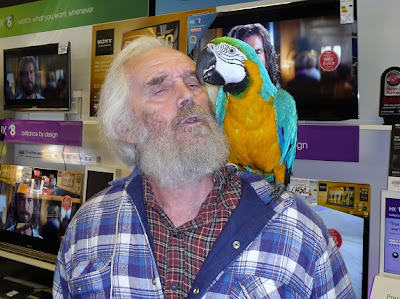 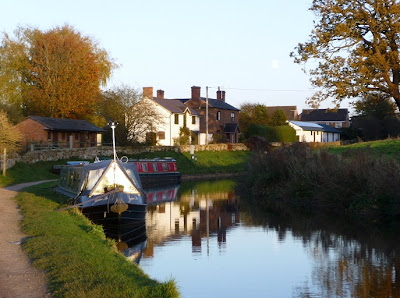 The little doors in the bridges are where the stop planks are kept.

Thank you Adam. I thought someone might enlighten us!
Elly