A day in port - Brentford

Today we planned to stay at Brentford - me to work, the others to visit Kew Gardens.  I've been struggling to keep up with my work with so much to see and do lately.  And, the other day when I'd set aside time for a particular job and after a bit of a contradicting instruction then couldn't do it, I wanted it out of the way before we go onto the Thames.

The other thing we wanted to do first was to watch today's boats go down the locks and onto the river.  We walked to the first lock where widebeam Wanderer was about to negotiate it.  We chatted with Lyn and watched her work out how it operates while Martin waited patiently on Wanderer.  Turn the BW key... hold in the button to open the sluices... no... just press the button... watch the lock fill... press the button to open the gates... nope... hold this button down until the gates are open.  Lyn said they'd come down earlier to watch someone else go through so they'd have an idea of how it operated.  We then walked on to the last lock.

A strange walk it is, like walking through a maze.  Along pontoons, up and down steps, beside buildings, through gardens and hedges.  Eventually we had the lock in sight and Barry and Carol were there already.  Quite a row of boats were waiting for the appointed time slot and right on queue the lock-keeper arrived.  There wasn't a huge difference in water level and we argued good naturedly (for a change) about whether that was because the tide was coming in, going out, high or low.  There was no real consensus on the matter.  Just before the gates were to open we moved down to where the canal meets the river and watched them all make their way out.  It didn't look so daunting from up there but I'm sure it'll be a bit different when we're making the journey ourselves.

As we turned back Carol and Barry decided to go right then to Kew Gardens so Mick went off with them and I walked back on my own.  I'd only done an hours work when Mick stepped back on the boat.  He'd caught the bus out there with them and baulked at the sixteen quid entrance fee.  It's one thing to make an afternoon of something like that together but he decided to give it a miss.

Only trouble with that is that he now wanted help or to discuss the preparations for tomorrow.  How long mooring ropes do we need?  Should he cut our longest one in half?  Should he use our long centre ropes for stern and bow?  Where are the life jackets?  Could I come and look for them.... they're not walking out of the cupboard themselves.  How do you put them on?  Do they inflate themselves?  Can I look on the internet for instructions?  What should he put the anchor chain in?  Can I come and see if I can lift the anchor myself?  Where will he put the tub now containing the anchor chain?  Where is the Thames book we bought?  Does it say anything about mooring ropes?  Can I find a map that shows where we'll have to go when we reach Teddington locks?  Where will we moor tomorrow night?  So the afternoon went on but eventually I had the job sorted.  I'd actually hoped to be ahead a bit for next week but that didn't happen.


We were reminded yesterday of a funny thing that happened on our way through Camden Locks the other day.  Carol has a tendency to talk to people... anybody... in fact I've been joking to her that if there's nobody at the lock she could knock on the door of the lock cottage and ask if there's anybody to talk to.  Barry gets frustrated with her distraction and we're often at a lock with my gate wide open and Carol perched on the end of her gate chatting to somebody.  The boys are bringing the boats in as they've seen that I'm opening my gate.  They toot horns or I call out to her to galvanize her into action.

It happened at the last lock heading back out of Camden.  We needed to get back on the boat here and the boats were on their way out.  It was windy and with the lock surrounded by a fence and a locked gate and a crowd of people to push through it was much easier to get back on the boat at the lock than try and pull in to the bank in front of the gongoozlers and us push through them to get on the boat.  A lady called out to leave the gates open for them but I'd already closed mine and Parisien Star had been caught by the wind as Mick exited the lock and the boat pushed beyond my reach.  I said to Barry that I'd walk across my gate and get on their boat.  Carol was leaning on the fence that surrounds the lock, facing away from us, chatting to someone.  Barry yelled out to her, she looked up and started to trot along the lockside in the opposite direction of where we were going.  He yelled again and she just turned around like an obedient sheep dog and trotted back the other way.  She did manage to get on the boat but I couldn't stop laughing!  Never a day goes past that we aren't laughing about something.  What great companions they are.

Reading Waiouru's blog this evening reminded me about props.  The water around London and until about the Hanwell lock flight was clearer than anywhere else we've been.  We were most surprised.  Mick took off the weed hatch lid and removed a bit of fishing line from around the prop shaft.  Barry decided to have a look under his weed hatch too.  First time he's ever seen their propellor!  It was strange cruising along and being able to see how shallow the canal was.  The bottom was line with grocery bags and empty drink cans.  I even spotted an enormous fish swimming by.

Mick noticed that on yesterday's blog there were two photos of him sitting looking like he has nothing to do!  I think he got a bit of a shock that he looked so relaxed.  He really has adapted well to not having work or his shed.  There's always something to do on a boat and often someone to chat to at a lock. 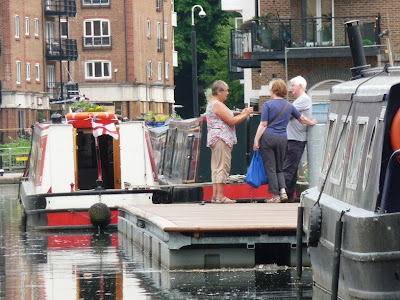 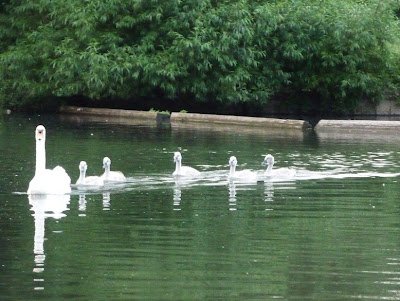 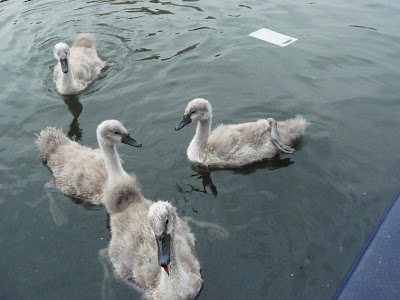 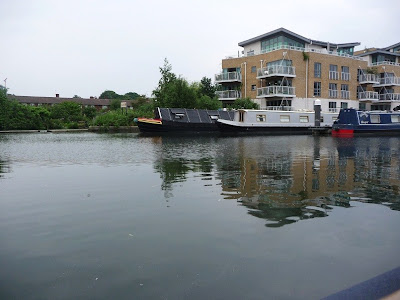 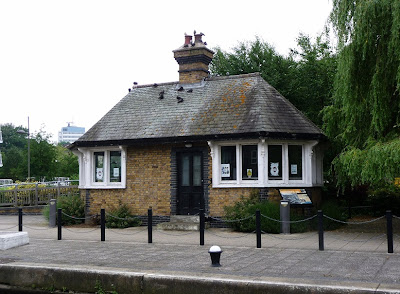 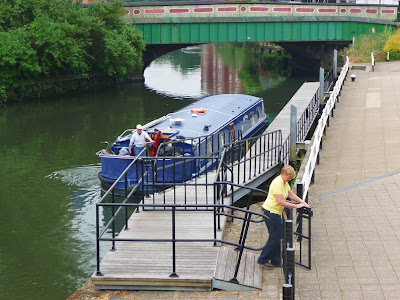 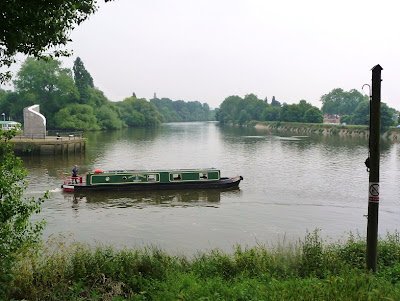 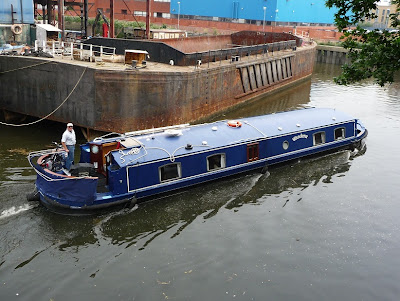 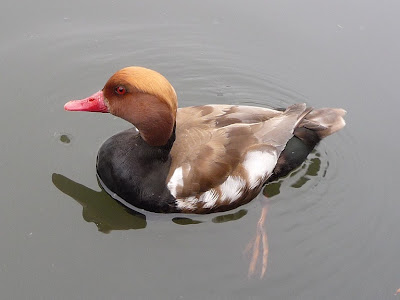 Hi you two! We felt the same way when contemplating our first foray out onto the River Thames just a three weeks ago! You need bow and stern mooring ropes of at least 19 feet. The deepest lock in 9 feet and you need some rope to hang onto once it come back to you. We went for 25 foot to be on thee safe side.
We also bought some chain to lock up our boat as Doug and James on chance mentioned that their neighbor a few weeks back was let go in the middle of the night by some toe rag, but the guys were okay because they had chained their boat as well as tied up with ropes.
We moored our first night just after Kingston bridge, on the right hand side--it is lovely there, with grass and big trees. you can moor there for free for 24 hours.
We don't know if you are planning on doing the River Wey but we highly recommend it--it is gorgeous and not be missed!
Take care and perhaps our paths will cross soon--we are ahead of you moored up tonight at Laleham.
Jaq and LesX

Jaq & Les,
Thanks for the comment and advice. We bought a bike chain. I think someone at Crick must have read the Chance post too - the chains were right at the front of the stall! I have Les's email address so if we get near we will look out for you. I will email you a phone number.
I better look where Laleham is!
Would be nice to have a chat!
Elly :)

Just relax and enjoy the river, it looks daunting at first but you soon get the hang of lassoing the bollards in the locks. All the lockies we've met have been great. Moorings can cost though!

Graham & Jill,
Thanks for the moral support. We're actually getting used the them already. Not as hard as we expected. It was only coming into Teddington that was a bit scary.
Elly