We had a peaceful night moored at the London Canal Museum.  Carol had a chat with the locals after we arrived yesterday afternoon and last night we ate our dinner perched on the back of nb Winton's Folly.  With electricity hookup and a water tap we made the most of it and did about 3 loads of washing.  Carol made the most of it by getting her iron out!

With the museum being closed on Mondays we didn't have to rush out in the morning.  Barry was thrilled to get his two cups of tea in bed.  I didn't sleep in, I had work to do!

Barry's been wanting to cut a little off the bottom of their steel doors at the back of the boat.  They'd like to put down the same matting we have in our cratch and at the stern but there's no gap beneath the doors.  Mick and Barry got out the angle grinder and did one of the pairs of doors before the blade was too blunt to do any more.  At least half the job is done.

We got on our way about 11.30 and decided to try and stop somewhere near Camden Market so we could have a very quick look.  At St Pancras Lock I turned as the roof of the boat rose to the top and saw a cat standing on the roof.  I quickly shooed him off but he just turned and jumped straight back on again.  By the third time the roof was beyond his reach so he leapt onto the gunwale and stood looking back at me.  I virtually had to chase him off to prevent him hitching a ride.  A fellow walking past said the cat was a regular stowaway on passing boats.

Between the locks at Camden Market it was devoid of passing boats so we decided to be a little cheeky and stop on the lock mooring for a little bit.  There were quite a few hoodie clad youngsters lurking about and two police officers patrolling.  As Mick pulled into the edge he heard a nasty scraping sound.  A bit of investigating revealed a submerged supermarket trolley.  Using a hook he managed to drag it out of the canal and we moored up there together to get some lunch from the market.

At the last lock there was a bit of confusion in closing the gates and getting back on the boats.  I was on the inside and by the time I closed the gate the wind had pushed Parisien Star beyond my reach.  I hurried across the gate and jumped on Winton's Folly instead.  The bridges on this stretch of canal have barriers along the path.  I assume it's to prevent people getting onto passing boats but we often use the bridge holes as a convenient place to get on or off the boat.  As this wasn't possible, Barry caught up with Mick and mid-stream they slowed down enough so I could step from one boat to the other.  We passed nb Jason which runs canal boat rides.  It was my first ever trip on a canal boat about 10 years ago.

We had hoped to get a mooring in the Paddington Basin but when we got there it was full.  We returned back out to the visitor moorings at Little Venice just in time to see a widebeam pull out from a boat ahead of nb Josephine... still moored there with a big black boat buttied up.

Our friend Lynne had sent a voucher from "Groupons" for a birthday dinner at a restaurant near Oxford Circus.  We thought this would be a good time for it - between our birthdays.  The voucher was for 4 so our partners in crime came with us.  We took a bus (sitting upstairs) from Edgware Rd and I knew Mick was going to complain about the crowds.  It was peak hour, after all.  When we reached Oxford Circus there was a huge number of people marching along the footpaths.  Trying to cross the road at the junction of Regent St and Oxford St there was a swarm of people trying to get down the stairs to the Edgware Rd underground station.  Mick insisted I take a photo.  I thought he was going to have a meltdown having to walk through that crowd.

When we arrived we weren't sure what to expect... it was actually a nightclub that was using the early evening hours for restaurant service.  The decor upstairs was rather odd with artificial rocks around the walls and artificial greenery everywhere.  They were rather disorganised and we had to sit upstairs and have a drink because the chef was late due to an accident of some sort.  The "restaurant" was actually in the nightclub.  We walked down a very dark stairway into a black painted and very dimly lit room with masks on the walls.  The fellow who served us was very friendly and helpful if a little eccentric.  It was 2 1/2 hours from arriving to finishing our two course meal with long waits in between.  The meal itself was quite nice, and we each got a cocktail too.  A very strange experience. 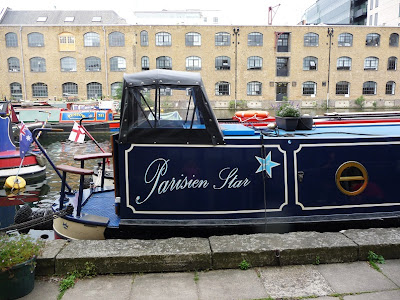 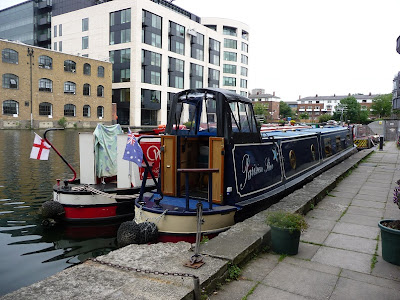 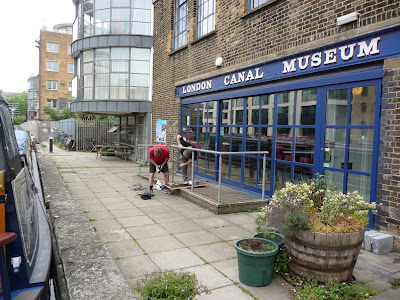 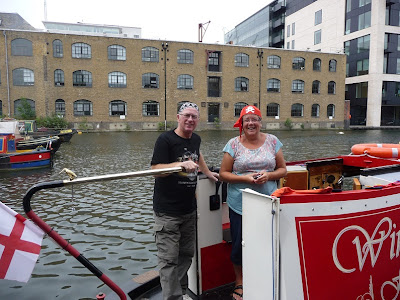 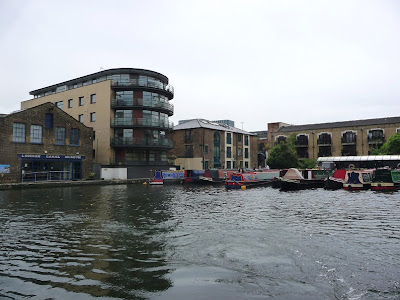 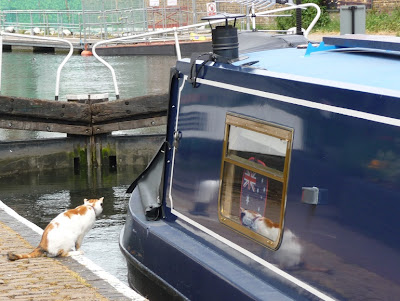 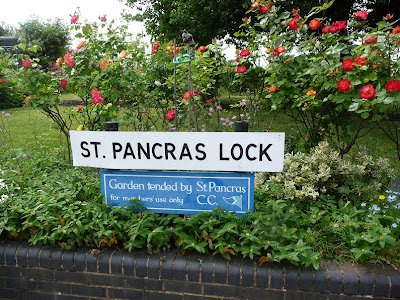 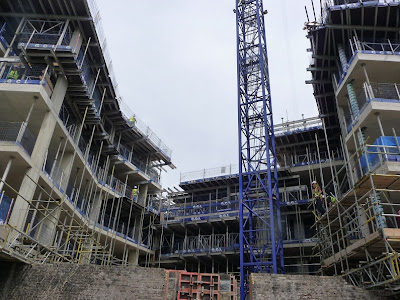 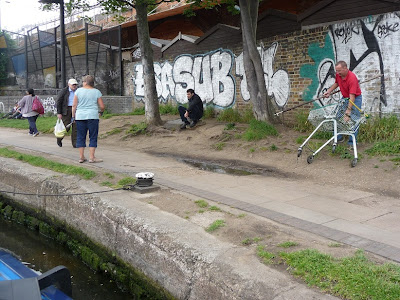 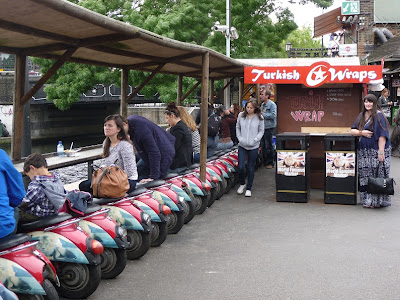 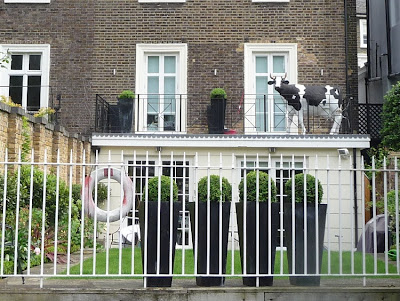 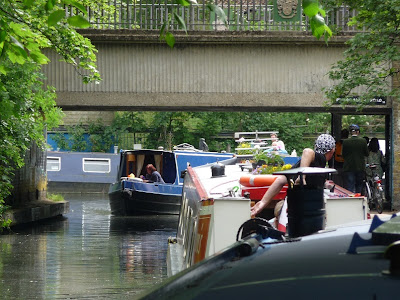 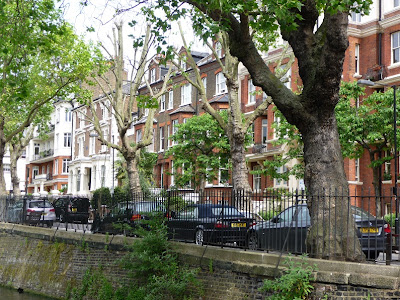 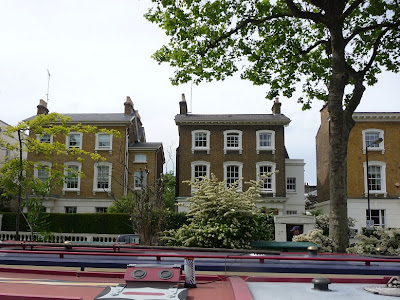 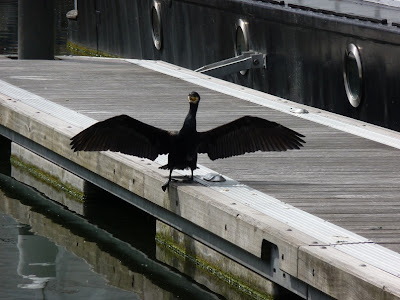 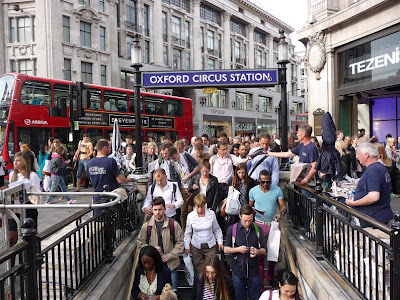 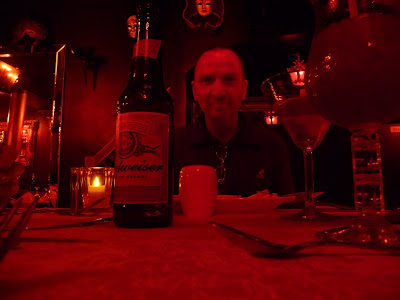 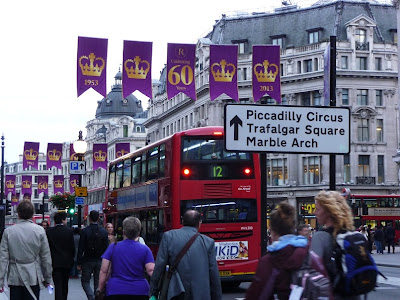 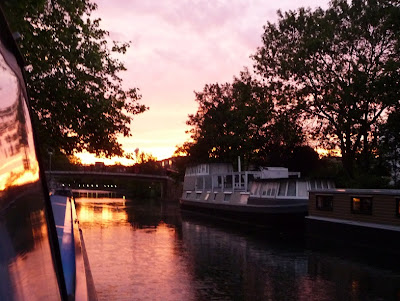