I just love London but Mick hates it.  Well, it's crowds he hates and London has plenty.  He couldn't just stay on the boat in Little Venice so we decided to buy hop-on-hop-off bus tickets.  He's had a single day in London before and this is how we spent it then too... there just wasn't much hopping off.

We walked to Paddington Station late morning and bought our tickets.  He also agreed to visit the Tower of London.... not very enthusiastically.  We spent about an hour and a half on the bus, listening to the commentary.  As the bus headed closer to the centre of the city the crowds on the ground below were increasing and so was Mick's anxiety level.  We saw Trafalgar Square, Piccadilly Circus and Big Ben.

It was nearing lunchtime and we'd promised ourselves a treat.  Yo Sushi have a discount deal on Mondays so we got on the Tube... another first for Mick... and went to Victoria Station for lunch.  It gave old stress-head a chance to unwind.  The business of making our way up and down the stairs of the underground station among the throngs of people wasn't a happy one for Mick.  Usually if we walk anywhere he's marching off ahead of me but today I had to keep looking back to make sure he was still trailing along behind.

He decided that if we were to go to the Tower then we have to do it today and "get it over with", so off we went.  As we got nearer we could hear gunfire.  When the entrance to the Tower came into view I thought Mick was going to have a melt down.  There were crowds of people, and I mean crowds.  There was no way I was standing in that queue either!  We could see the smoke from the gunfire and through the crowd there were glimpses of red uniforms.  They were watching a gun salute, which turned out to be in honor of Prince Phillip's 92nd birthday.  Don't the Brits love pomp and ceremony.  There's nothing like it in Australia and even Mick was straining to see.  What an added bonus that was.

We waded our way through the onlookers to go through the entrance.  It was still rather crowded inside too.  I've been once before and it was nowhere near as busy as today.  Shame for Mick because he doesn't enjoy anything when there's lots of people about.  We had a wander around, visited the vault housing the Crown Jewels, watched a mini changing of the guard and that was about his limit of being jostled about.

Back out on the banks of the Thames we had a stroll, admiring Tower Bridge.  We decided that tomorrow we'd go on a Thames cruise and then it was back on the bus.  We hopped off again at Marble Arch to walk along Edgware Rd to the post office.  I'd arranged for our National Trust cards to be sent there.  The cards hadn't arrived yet so we found our way back to Paddington Basin and then back to the boat.

The day was overcast but not cold.  Being in the open on the top of the double decker bus was a bit breezy but once we had a seat undercover it was fine.  When I got back to look at today's photos I immediately noticed how grey everything looked.  Doesn't blue sky and sunshine make a difference to a photo.  But, that's how we saw it today.  The red of the guards' uniforms, the green of the odd patch of grass and the blue of tower bridge or a front door stand out sharply in the photos.

We got chatting to a couple who were walking along the towpath admiring the boats.  They'd taken a wrong turn back to their hotel from the tube station and stumbled upon the canal.  What a shame it is that most tourists aren't even aware that the canals are here... right in London.  We invited them in to have a look at the boat which they found fascinating.  They were full of questions about our life afloat.  It gives us a bit of a jolt sometimes when we're reminded of what a unique opportunity it is to be here. 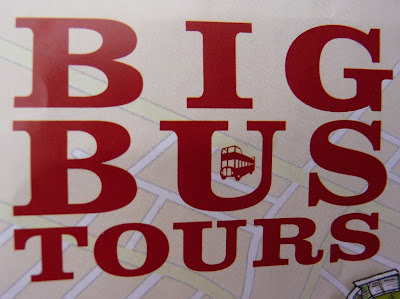 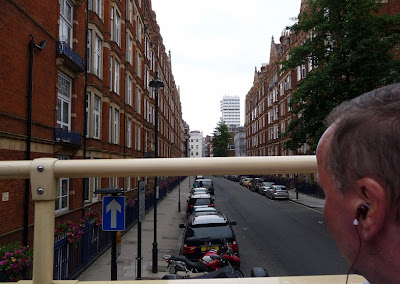 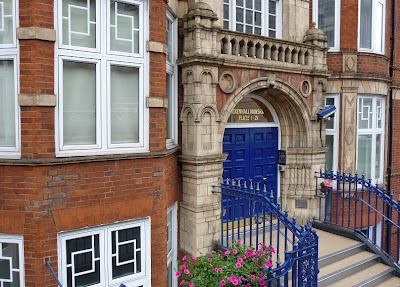 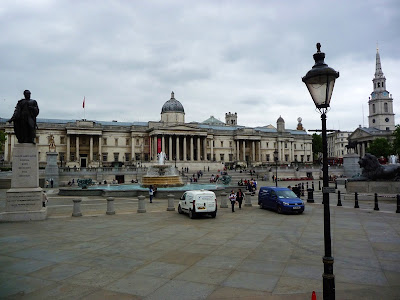 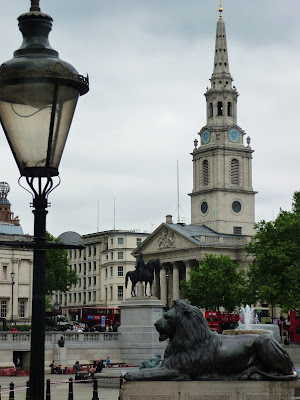 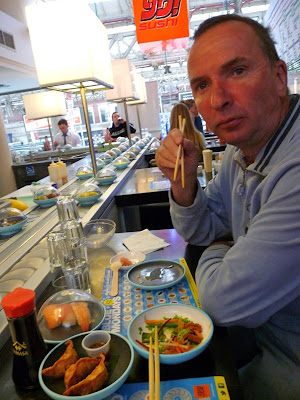 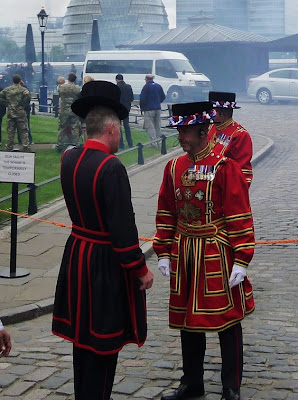 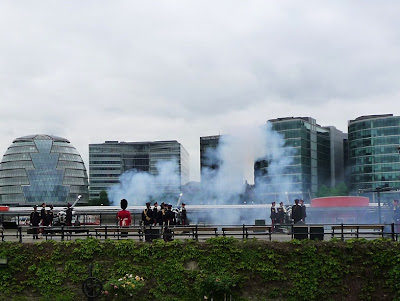 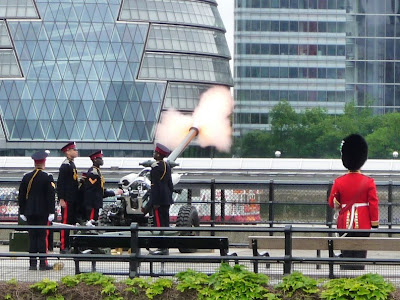 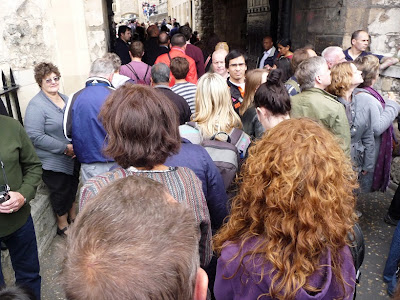 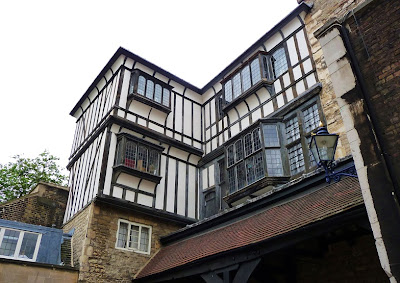 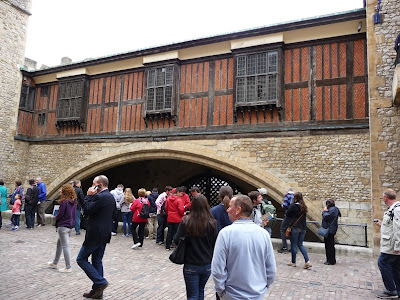 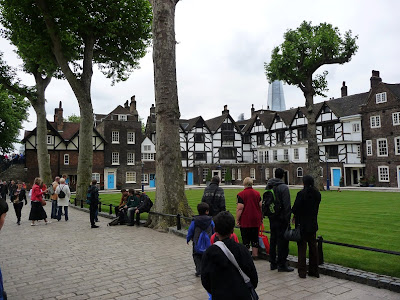 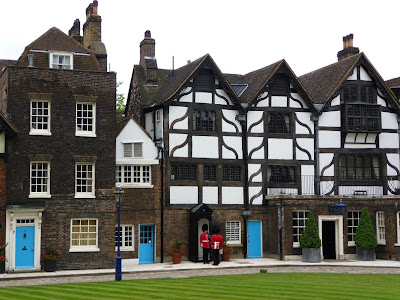 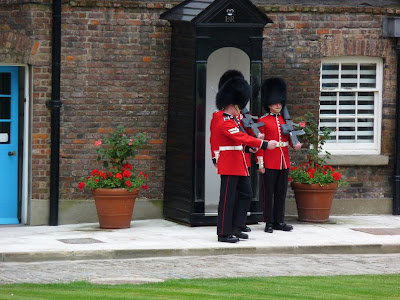 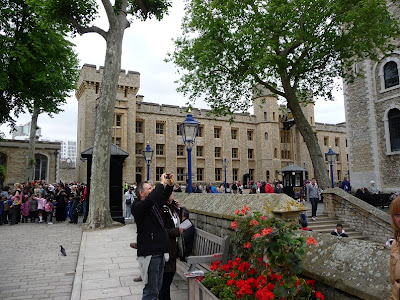 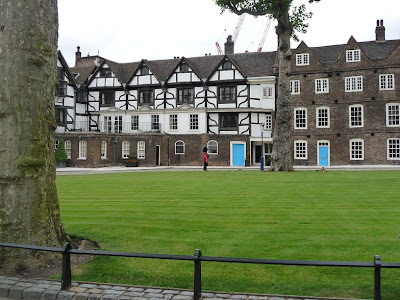 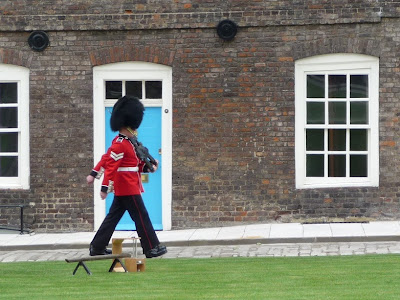 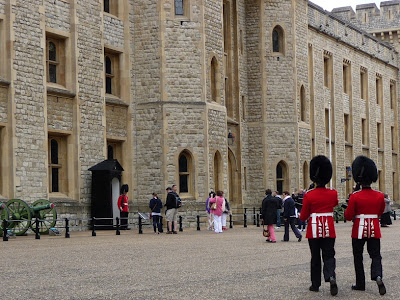 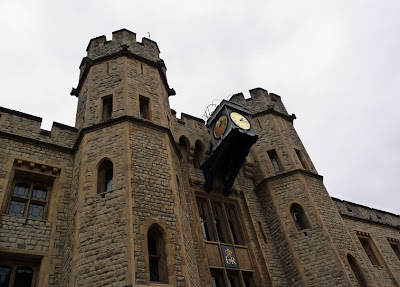 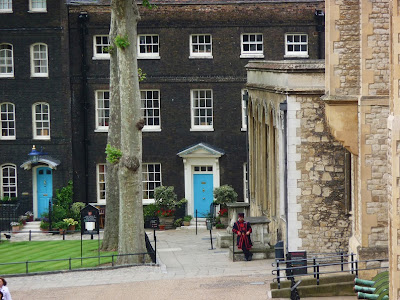 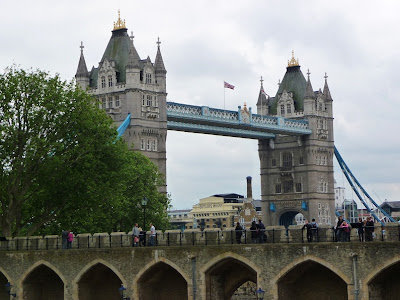 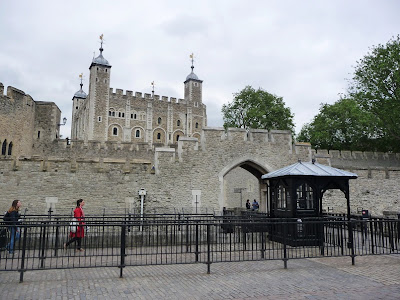 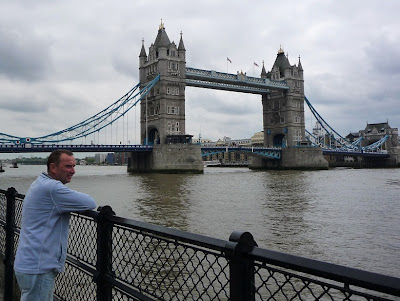 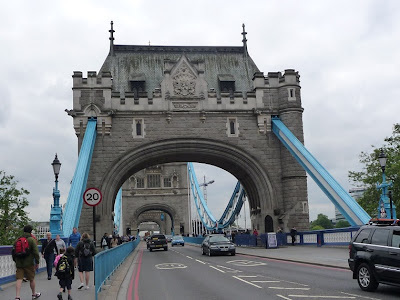