For many years we've read about or seen on tv about Portobello Road Market.  I made a visit by myself while Mick was back in Australia in February and now finally Mick got to visit for himself.  It was one of the few places in London that he particularly wanted to see.

We headed off about 8.30am and walked down to Westbourne Terrace to make our way to the "antique end" of the market.  Along the way we saw a rather floral car!  It wasn't too busy when we arrived.  The very first little store we went into was jam packed with stuff.  It was piled to ceilings and hanging from the ceilings.  I took a photo of Mick's first sighting of all the goodies on offer, only to be told off for taking photos.  Not allowed, apparently.  I had the flash turned off and thought my one and only photo would be terrible but as it turned out I quite like it.

I took Mick to see the clothing store that had the walls lined with sewing machines.  It really looks fantastic.  In another little arcade of stalls we stumbled across a lady right down the back who sold horticultural and garden items.  We could have taken them all home!  She was very friendly, especially after so many pompous types, and we chatted to her for a while.

At another stall there was a fellow with literally dozens of pot lids.  He could talk the leg off a chair and we struggled a little to get away, but he was a fountain of information.  Very interesting.  There were a couple of stalls just around a side street and we almost skipped them but decided to take a quick look.  Lucky we did as we stumbled across a bit of a bargain.  There isn't much in the way of bargains to be had at Portobello Road so it was nice to find a little sampler from 1857.  We couldn't resist it and it made me a great birthday present.

We continued on until we reached the A40 and then made our way back to the canal and returned via the towpath.  Just before we reached the bridge behind our mooring we saw Barry and Carol heading towards us.  They were on their way to the market just as we were returning.

I'm behind on work with all the sightseeing so tried to catch up a little this afternoon.  Carol came over for a bit of a chat about our cruising plan for the next couple of days and later I went to help Jean with her first blog entry.

Today :
1. Flower decorated car
2. Mick didn't know where to look first
3. Sewing machines by the dozen
4. The coot nest is growing
5. Another way to see the canals
6. A line of canada geese (youngsters at the front) 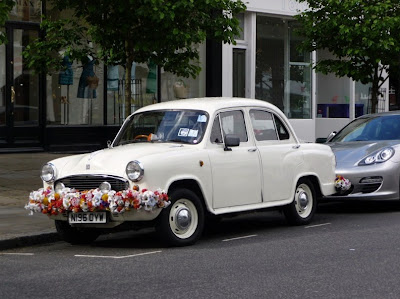 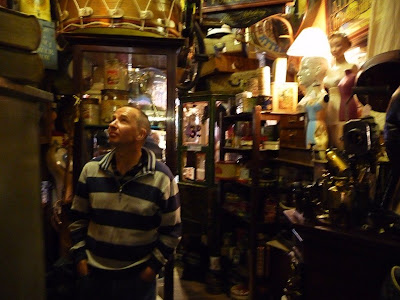 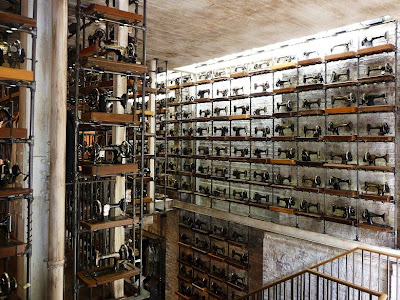 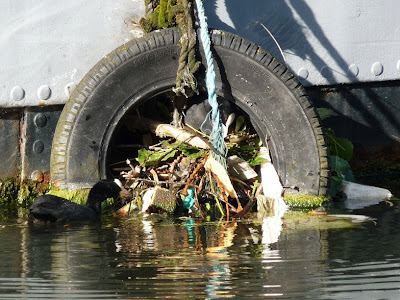 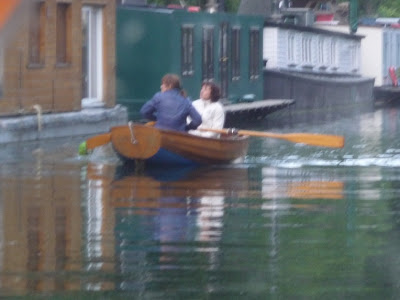 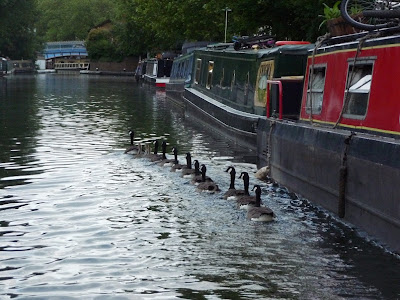 Hi Elly. The flowery car you saw is a Hindustan Ambassador from India. They are everywhere there, and are widely used as taxis. They are identical to a 1950's Morris Oxford from the UK - not surprising as when the 1950's Morris design was upgraded with a new model, all the tooling was sold to the Indian company, and they have been in production there ever since. Somewhat pre-historic now compared to our own expected standards of car design, they are however a valuable source of spares for owners of the 'classic' UK Morris Oxford.