A quiet day in Little Venice

After all the excitement of yesterday, and all the crowds of London, we decided on a quiet day at home.  We had a leisurely breakfast and caught up on some housekeeping chores.  Mick went for a walk to Edgware Rd post office to see if our National Trust cards had arrived yet.  Still nothing. We had a boaters' meeting to discuss our plans for the next week or so with Barry and Carol. We've now decided we'll stay at this mooring until Sunday

In the afternoon we went for a walk around the Bayswater area for a look at the houses and to check out the shops.  There are streets and streets of the most gorgeous terraces. On returning to the boat Mick decided we'd move up to the water point to fill our tank and reverse back to the mooring.  We hadn't been careful enough with our water supply to last until Sunday.

Barry came out to help proceedings.  We had to untie our boat from nb Winton's Folly, and our boat from the mooring rings.  Then we pushed Winton's Folly and Josephine (tied together) out at the bow, with Winton's Folly stern tied to the boat behind.  It took a bit of manoeuvring but Barry managed to keep hold of his centre rope and pull both boats into the bank after we'd slipped out from between.  We chugged down to the water point and filled not only our water tank, but three large water canisters for Winton's Folly.  They have a slightly bigger water tank than us and with the extra from the canisters they're hoping to make it to Sunday.

What a difference it is these days when we have to reverse the boat a fair distance.  It used to be near on impossible but a bit of practice has made the whole process more manageable.  Just a couple of burst back into forward to straighten up along the way and we reached our destination in no time at all.  We now have the outside spot in our little row of terraces with Josephine now being mid-terrace.  The biggest bonus for us is that we can open our side hatch doors as they are facing out to the canal.

It will be nice to have a few days away from the bank.  This morning after making breakfast we had the kitchen window wide open to let steam out.  I was sitting at the dinette and saw some school kids lean through out kitchen window with their cameras to take photos of inside the boat!  I was stunned!!  I called Mick who had his back to them and at the same time their teacher saw them and yelled out "You can't do that, it's someone's home!".  Most of the time I'm not fussed about the folk peeking through windows but after a few days it does get a bit tiring.  Feels like living in a goldfish bowl.

As we sat at the dinette eating our dinner tonight, it was pouring rain outside.  Moored opposite us is a huge white widebeam thing that obviously doesn't go anywhere.  The bathroom window opened and they tossed a tissue out into the canal.  We were astounded!  How could you live on the canals and have so little respect for them?  The boat has a few old car tyres as fenders along the canal side.  The one opposite the dinette is being used as the foundation for a nest by a pair of coots.  The poor little boy coot has been at it non-stop swimming up and down collecting materials for the nest.  It's sad to see that about half of what he brings is rubbish - a straw, a crushed takeaway coffee cup, a Sainsbury's shopping bag, a chocolate wrapper.  I'm thinking he probably waits under that bathroom window for the cast-offs.

Earlier this evening we had a pair of swans at the dinette window, the coot couple across at their nest and a mother duck with 4 ducklings pecking at the boat opposite.  Such a lot of bird life for a city. 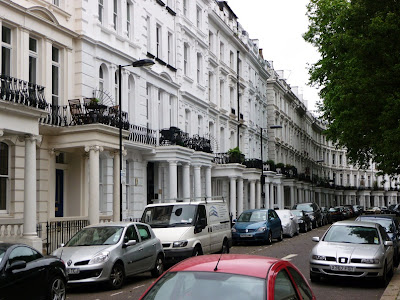 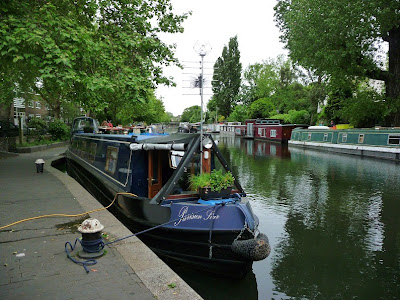 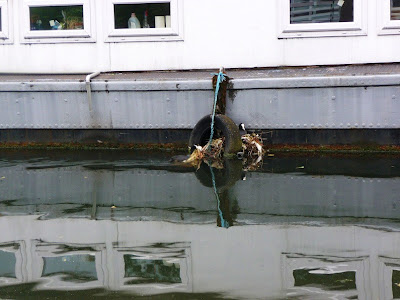 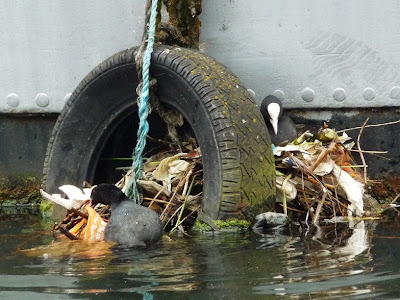 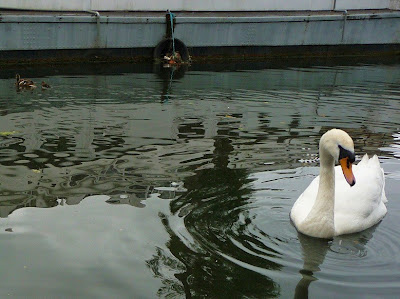