The crew of nb Betty Eccles had mentioned that they were going on a trip boat to the races yesterday evening.  I knew as soon as I heard it that Barry and Carol would love to do that too.  When they came out and joined in the conversation that's just what happened.  So off they went about tea time.

We had an early night.  I've been so tired with the cruising on each day and trying to squeeze work around it and not miss out on too much of the sightseeing.  I rarely get time to do my sewing any more!  I was back at my desk before 6.30am.  It's "that time" of year in Australia with the end of the financial year fast approaching.  I'd promised my employer that I'd have this job I'm working on back to him by Tuesday night so I had plenty to do.

We all wanted to see the changing of the guard at Windsor Castle.... well as much as you can without paying to go in.  The guards march up from their barracks so you can sit or stand outside the castle and watch them march by.  We were off at 10am to walk up to the castle and take up our viewing position.  The sun even came out while we waited.  The tourists arrived in waves as buses were unloaded.  We had a great view of the guards marching by.  By the time we'd had a look in the shops and bought Mick a pair of his favourite Canterbury track pants it was near on lunchtime back at the boat.

Sue from nb No Problem had very kindly taken our Thames guide home with her last night and marked in moorings for us.   I found she and Vic walking along the path, book in hand.  They'd moored up on the island opposite us.  We passed nb No Problem on her island mooring as we headed off down the river and we wished we had known you could moor there!  What a lovely mooring.

We only travelled a short distance today.  First through Boveney Lock after filling with water and then looking for a mooring just beyond.  A boat waved to us saying they were leaving the EA mooring so we pulled in there and I walked ahead to check out the pencil mark in our book (courtesy of Sue).  She was right... it was a lovely spot opposite some pretty houses.  The boys decided to go check it out for themselves and such a shame... a boat had moored there in the few minutes we dallied.  So, we stayed on the EA mooring.  It's nice enough and Carol has a seat to sit on and read her book while I worked.  While she sat there, a fellow passed with his little dog.  The dog stopped and looked up at Carol  She asked the fellow what the dog wanted and he said; "He always sits up on that seat and gets a treat".  Carol moved over and the little dog joined her on the seat to eat his doggie biscuit.  I asked Carol if she'd received a biscuit too!

Some photos of our day :
1. A rather grand entrance to a shopping centre
2.  The entrance to Windsor Castle
3. & 4. Tweedle Dee and Tweedle Dum
5. Taken by a kindly tourist
6. Busloads of tourists pouring up the street
7. Union jack phone box
8. Sweeping lawns around the edge of the castle
9. - 13. The guards marching to the castle
14. Farewell Les!
15. Looking back at the castle
16. nb No Problem on her island mooring
17. nb Winton's Folly approaching Boveney Lock
18. Side by side in a lock for the first time on the Thames
19. Flower pot men on the lockside!
20. Lovely building
21. Carol whiling away the afternoon
22. Tonight's mooring 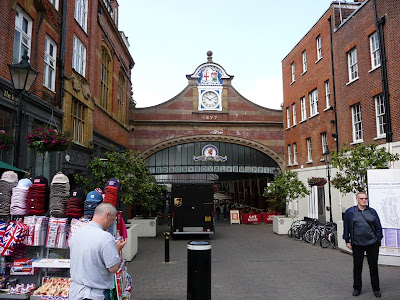 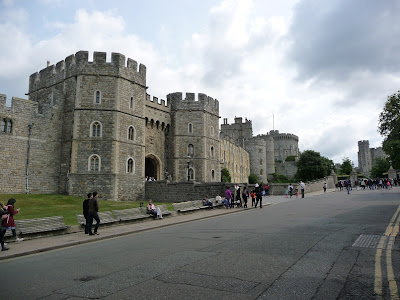 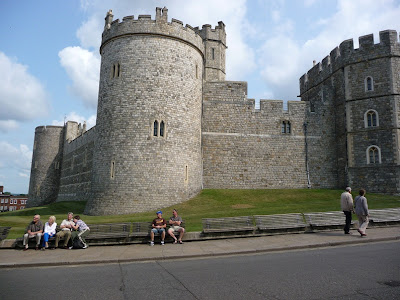 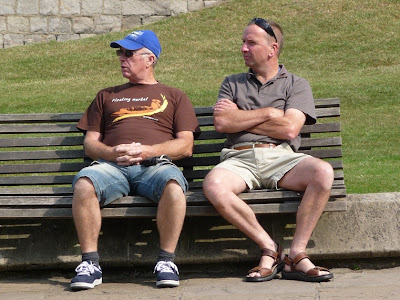 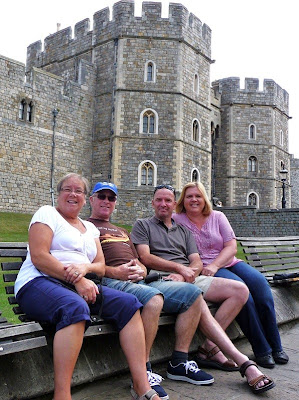 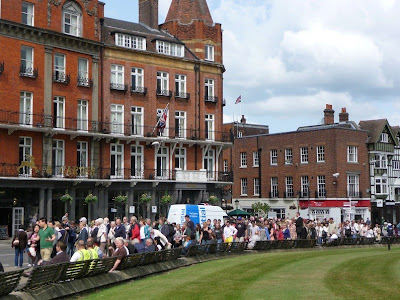 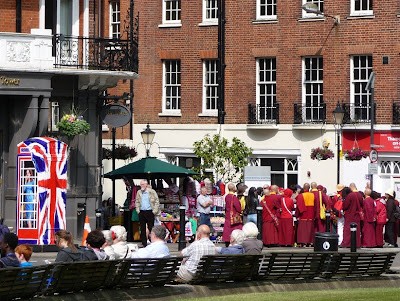 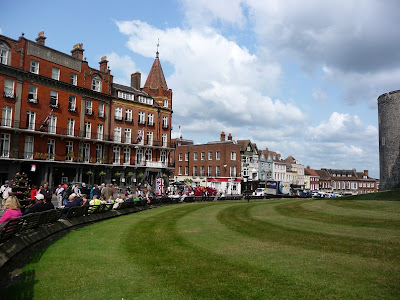 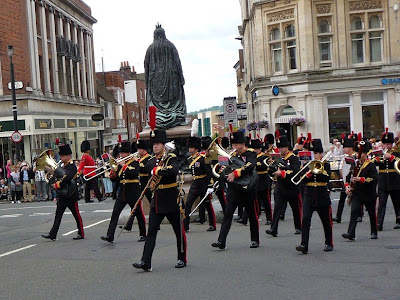 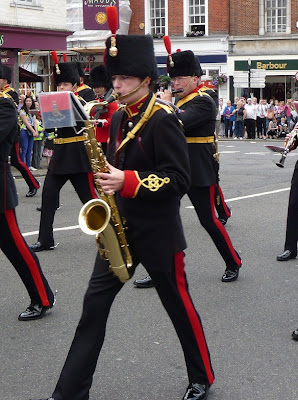 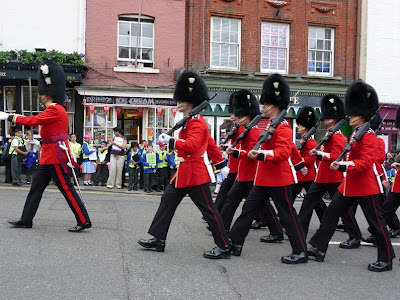 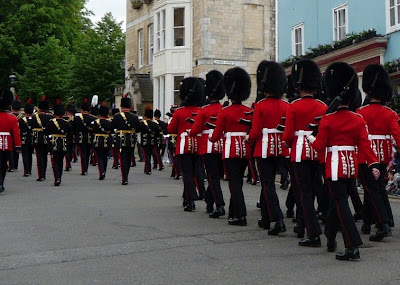 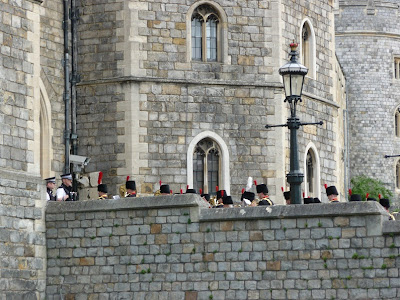 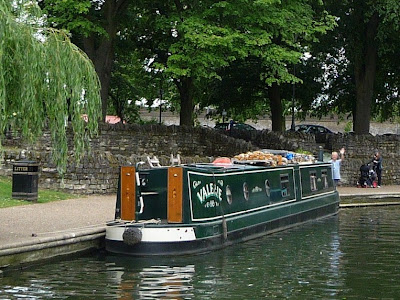 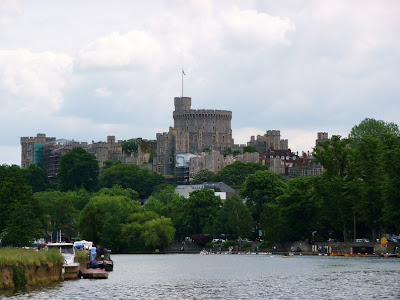 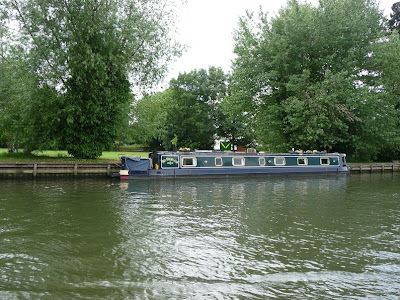 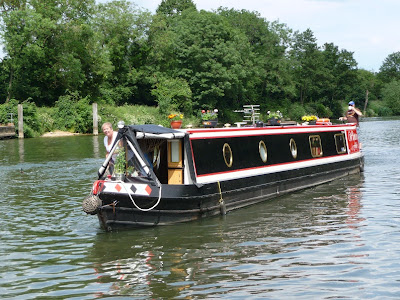 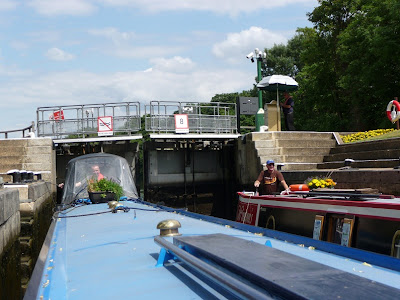 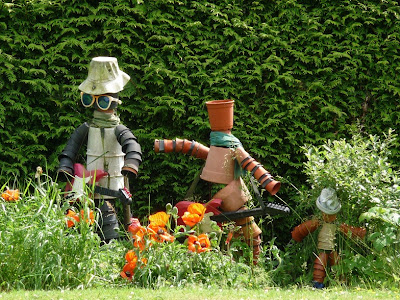 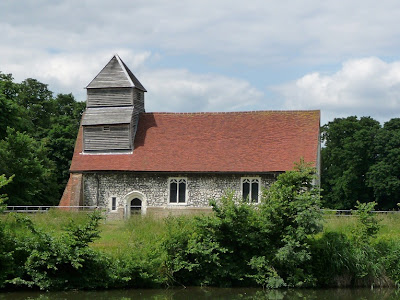 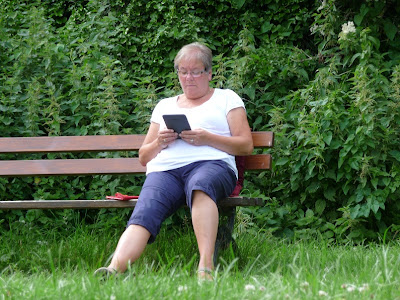 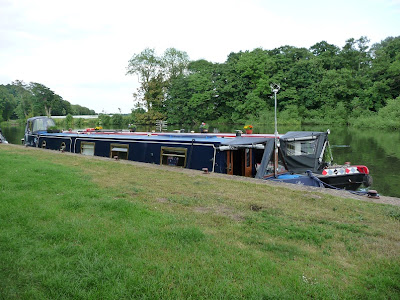 Looks like you have the hang of the Thames now. Enjoy.

Yes Andy, we're getting better at it! It's getting quieter as we go along too so that helps. So different to a canal.
Elly