Another day at Hemel

With the materials necessary for the shower update arriving today we knew we'd have another day at Hemel Hempstead.  I wanted to walk up to the post office as I have some letters to send back home.

Speaking of home.... we've seen a couple of episodes of a program on tv called "Australia" hosted by Simon Reeve.  I don't think I've ever seen such a depressing program about a country.  The first one we saw focused a lot on the alcohol and drug problems among the native Australians in the North, plus the appalling way they've been treated in the past.  There was a segment on illegal immigrants, the conditions they endure in detention centres and the time it takes for their claims as refugees to be processed.  Then the Great Barrier Reef - entirely focused on how not enough is being done to save it from both humans and the Crown of Thorns starfish.  Oh, and the box jellyfish.  It made the place sound right terrifying.

The show appeared on our tv guide again last night and this time Simon was traveling to Sydney and Melbourne.  Ooooh.... a glimpse of home!  He started at Surfer's Paradise and the terrible trouble they have with the "underworld", drugs, crime, bikie gangs.  There was a brief panning across of the beaches but the rest was the neon lights at night and the patrolling police.  Next heading south to Liverpool Plains where there's a battle going on to keep the mining companies out of such a fertile, food growing area.  Lots of talk about how Australians are dreadful when it comes to Co2 emissions.  In Sydney there was focus on racism, and in Melbourne.... well that was the end of the program with Australia Day fireworks in the background so it had nothing at all about the city.  Not the program we expected from the short blurb on the program guide.  I think the BBC should have re-named it "The Dark Side of Australia".

Back to today.... I walked to the main street of Hemel and found the post office.  The queue was so long I decided not to wait.  I just posted Carol's letter.  Soon after I got back Mick's phone rang.  It was Jewson's saying they were over the road at the restaurant whose address we'd used for the delivery of the shower panels.  What a helpful fellow he was, even helping Mick carry them over the road and down the towpath to the boat.  Mick threw himself into the project and by the end of the day things are looking good.  There's the shower screen to replace tomorrow and we'll be able to have a shower again.

Andy and Jean on nb Josephine moved on again today.  They're booked into a marina for the weekend so have a bit of a deadline.  I'm sure we'll catch up with them again along the way to London.

It was a little quieter around the canal today.  School started back after a week holiday.  There's a heron using this stretch as a fishing spot.  He has a little track worn among the reeds and a few vantage points where he stands looking for fish.  We've seen him catch one about 3 times.

It was a lovely sunny day again.  I was wide awake at 5.30am so got up to work.  It's such a nuisance with the poor internet reception.  It's taken me about 10 attempts to post each blog entry! 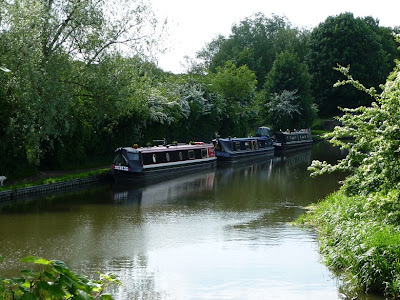 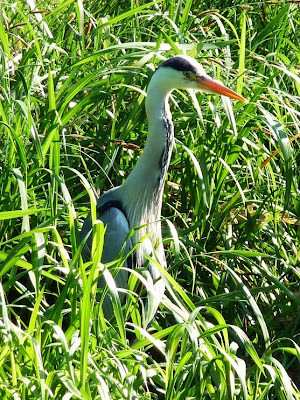 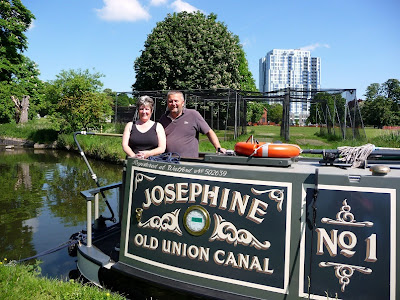 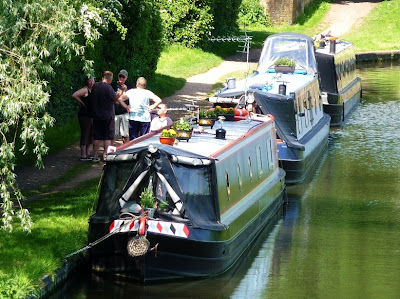 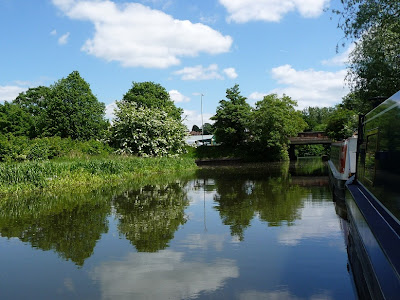 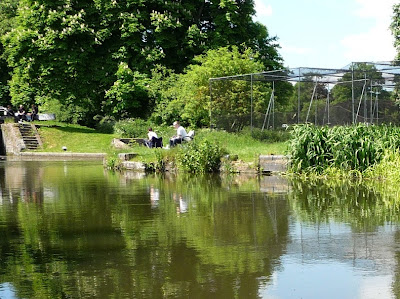 Did they mention the three most deadly snakes in the world all live in Australia?

If they had gone to Canberra they could have seen very feral animals :-)

Oops... I forgot about the snakes. They did get a mention! Elly