Lots of talking and laughing over lasagne and Canasta last night.  It was another "last supper"!  This time we know for certain there won't be another while we are on our boat.

An early start so we could get the boat chores done and be on our way.  First was the loo pumpout at the marina.  We had bought a token yesterday as it's a self service one.  We much prefer those that you operate yourself as we've had a couple of times where the person operating it hasn't done a very good job of it.

Then we reversed out of the marina entrance and moved up to the water point to take on some water.  We're conscious of the fact that the boat will be hauled out in a few days and on quite an angle to do so.  For that reason we want the loo, water and diesel tanks to be run down a bit.  Don't know if it makes any difference but we just thought it might be better to not have the contents of any of them sloshing about too much.

We went to say goodbye again to Winton's Folly, each time feels a little more sad.  This is the last waving each other off from boat windows.  On our way out of Braunston we gave a final wave to the Waiouru crew as we passed them.

It rained as we cruised.  I worked and Mick got wet.  We passed heaps of ducklings that furiously paddled alongside the boat away from their mothers.  Just as we approached what was to be the last locks we will do as owners of nb Parisien Star the cloud blew away and the sun came out.  We peeled of coats as we worked what are among our favourite locks... the duplicated Hillmorton locks.   It was busy at the locks but with each being a pair of locks makes it easier.  At the first lock the hireboat crew in the left hand lock saw us coming and kindly opened the paddle on the right hand lock so it would be set for us.  They left the gates open as they left because a boat was waiting to come up.  Mick closed the gates on our lock after I took the boat out and suddenly there was a shout and much arm waving.  The lady steering the boat coming up refused to use the lock that was open to them.  She wanted our lock so Mick opened our gates again and closed the gates on the other lock.  It turns out she wanted the one easiest to steer into.  At the third lock there was a bit of a queue.  The hireboat ahead of us pulled onto the lock landing on the left but it was the right lock that had a boat coming up and would be soon free. These folk also declined a tricky manoeuvre so waved me past.

Mick asked me to make mention so we can remember that we left our very last lock at 11.45am today, 13th May.  No sooner had we left that final lock and cruised around the corner when the rain began again.... on and off between the sun peeking through.

As we rounded the bend just before the visitor moorings at Rugby we spied a familiar boat moored up and facing us.  It was nb Josephine!  How lovely to see Andy and Jean, and Missy and Milo, again.  We had a chat and waved them off as they headed further on where they can stay overnight with the cats having safe roaming space.  There are two busy roads by these moorings.

Mick walked to Wickes to buy a couple of essential odds and ends.  Firstly a new cable for the tv aerial.  The one we had worked fine but it just wouldn't do, he had to get a new one.  Secondly a new rubber mat to stand on at the stern.  It's been much nicer under our feet to stand on one of these mats, and helped keep the mud out too.  The old one was looking a bit worn so he got a new one so it would look nice when Tore and Kirsten take her out for the first time!

We had pulled in on the park side of the canal and another boat had also moved on which left us on our own.  The towpath side had 4 or 5 boats moored up so when it got to 5.30pm and we were still alone we decided to change sides.  We had a bad experience with the local youth while moored by the park so thought it better to play it safe.  Later two boats cruised by, slowing down to look at those moorings, but both continued on their way.

I received a lovely email today from a blog reader I've not heard from before.  Her kind words brought a tear to my eye.  It still amazes me how many wonderful folk we've met through the blog and how many more there are reading that we've not heard from. 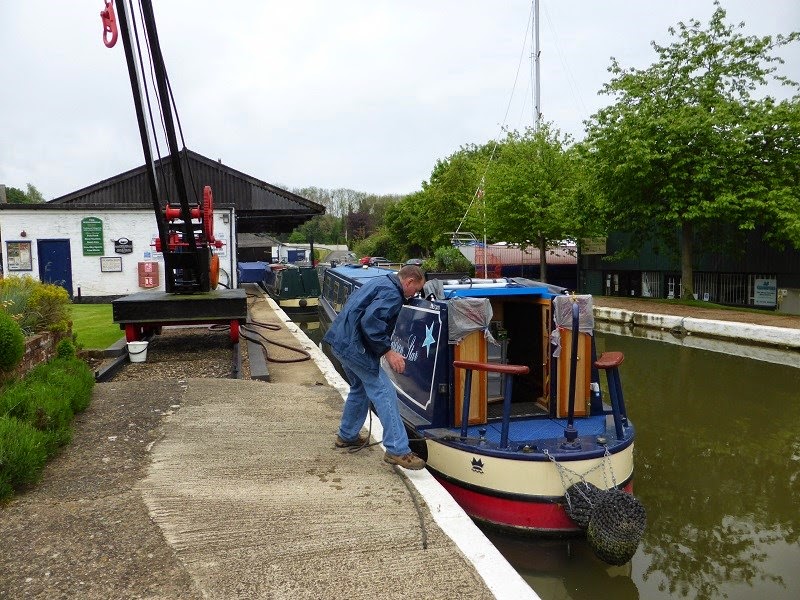 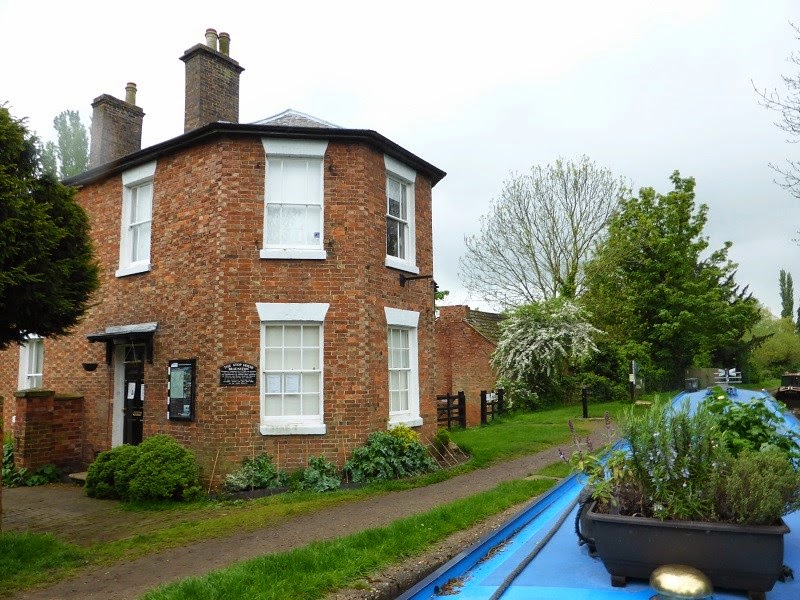 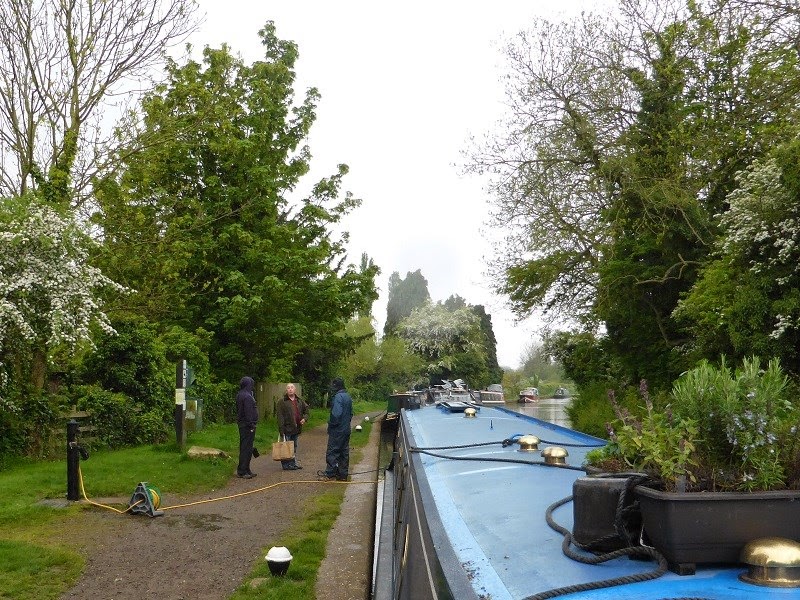 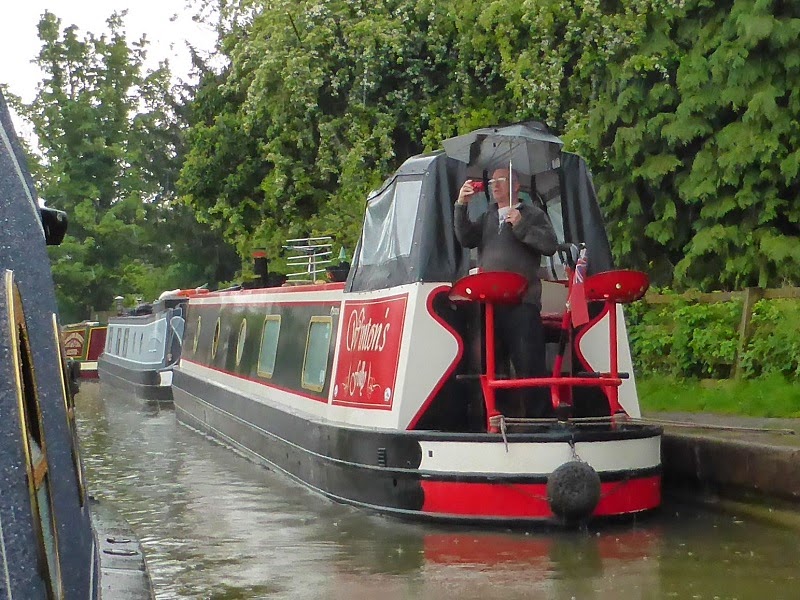 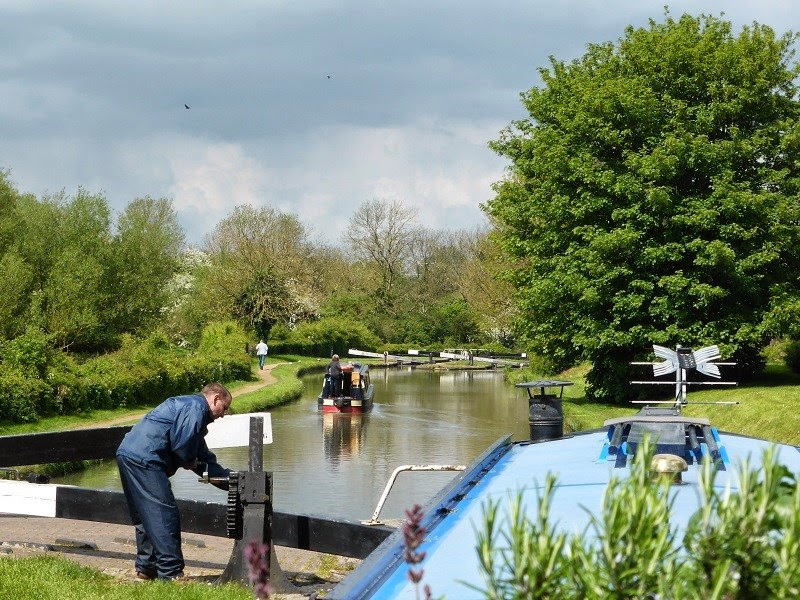 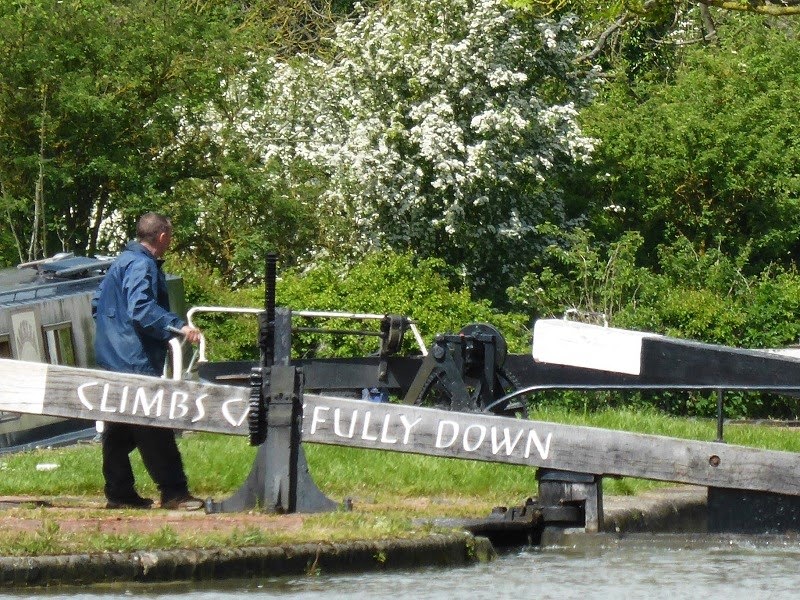 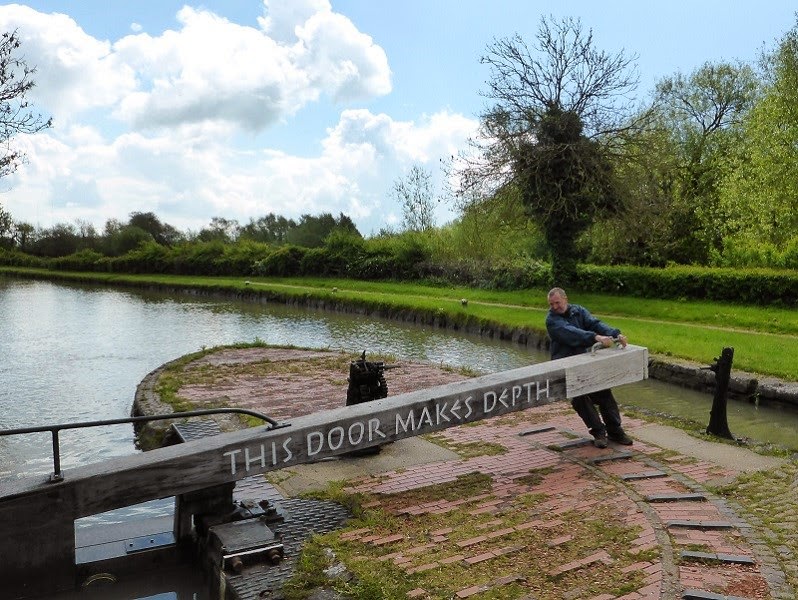 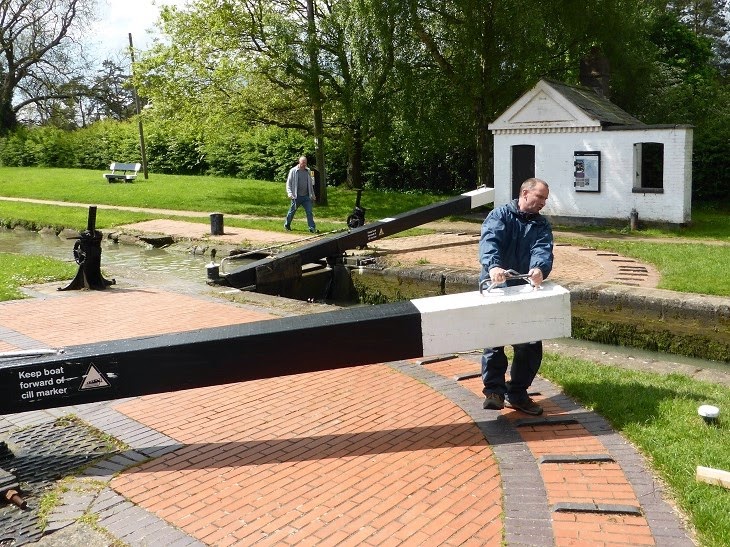 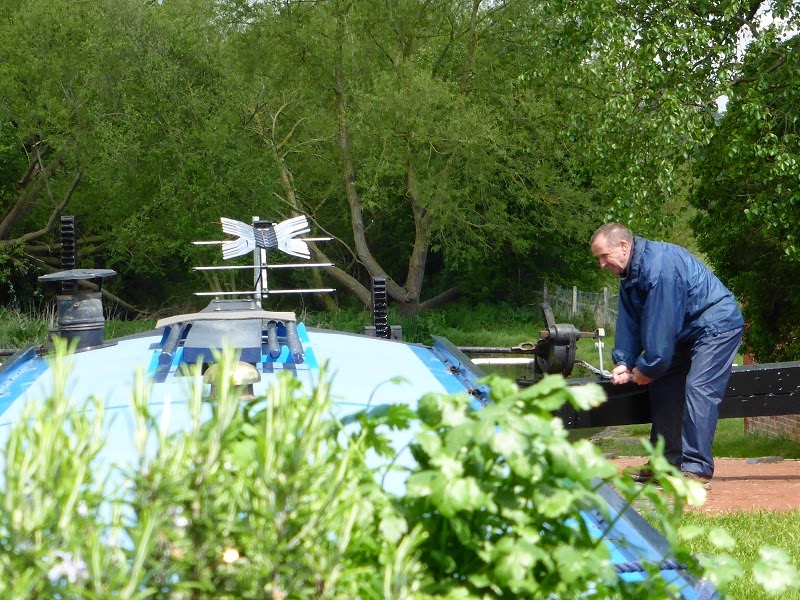 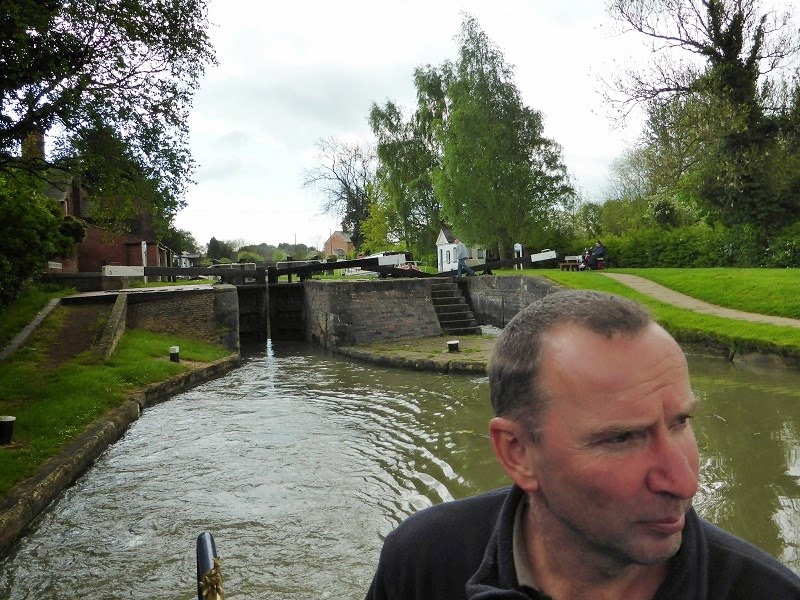 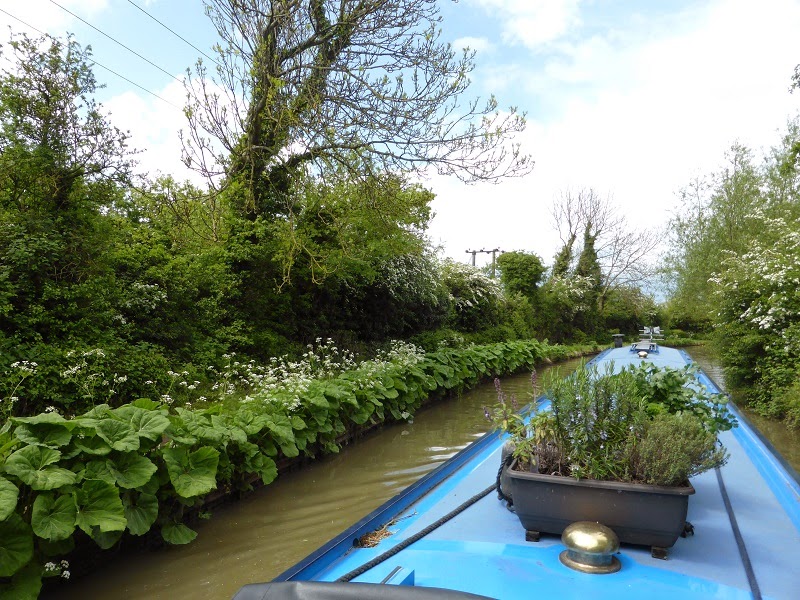 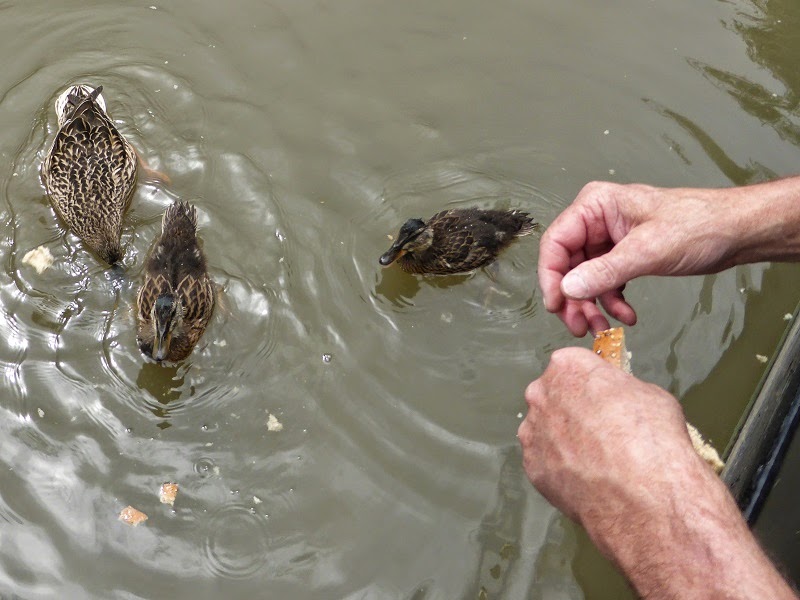 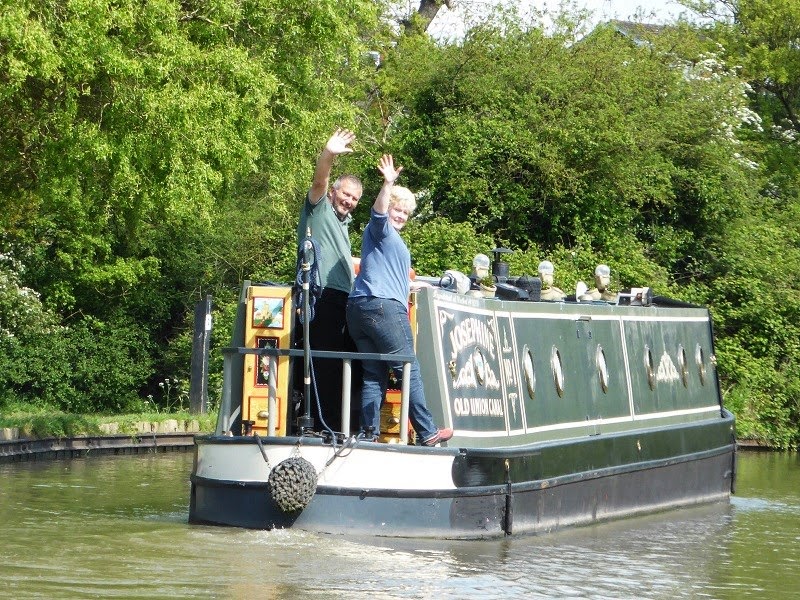 I am going to miss my daily canal fix following your travels and dreaming of actually belonging to the canal community rather than just snatching the occasional 2 or 3 week hire. My current strategy is to win several million dollars in a lottery so I can do the endless summer thing - 6 months here at home and 6 months on the canals :-). I suppose my chances will be slightly better if I actually buy a ticket ...

All the best with leaving Parisian Star and the last few weeks in the UK - and for the long trip back. Which part of Oz do you call home?

Hi Deb,
We'd love to be able to do the 6 month thing too but like you, the only way it would happen is if we won the lottery!
Glad you've enjoyed reading the blog. We live near Bendigo in Vic.
Elly

Just noticed I spelt your boat's name with an 'a' instead of an 'e' - sorry.

I know Melbourne well and have traveled east, west and south from there, but never north.

Hi Both,
We are sorry our paths haven't crossed since Birmingham. You will be torn between saying goodbye to your floating home and getting home to Australia. I'm sure you will have some fantastic memories and hopefully we will see you on the cut again in the future. Safe journey home.
Tony and Helen 'Holderness'.

Hi Tony and Helen,
Thanks for the kind thoughts. We've made unforgettable memories, that's for sure!
Elly

Wishing you both well on your return to Australia.

Thanks Stephen & Jayne,
We're looking forward to living in a house again!
Elly